Chapter 102: All Hands on Deck

Okay, so if you’ve been following along at home, you know that a bunch of great dudes came over one day in 2018 and helped us install a really sturdy, very heavy spiral staircase. And that spiral led to a roof with no railing and a pitched roof “deck” so, in other words, really unsafe. The neighborhood cats loved it, but we tried to keep humans from going up there.

It sat, untouched and unsafe, for so long because we had to get the siding done before Andrew could work on the top deck railing. Finally, this year, we got the siding up, so Andrew came back over and put the posts in.

Here’s Andrew welding one of the posts from the top of a ladder at the top of the stairs. 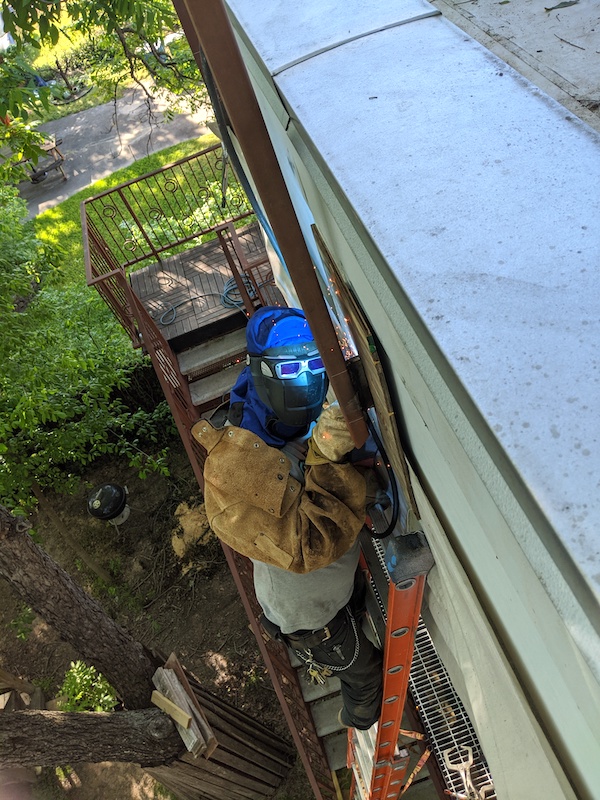 And here we are watching the sunset, with those posts all around us. Woohoo! 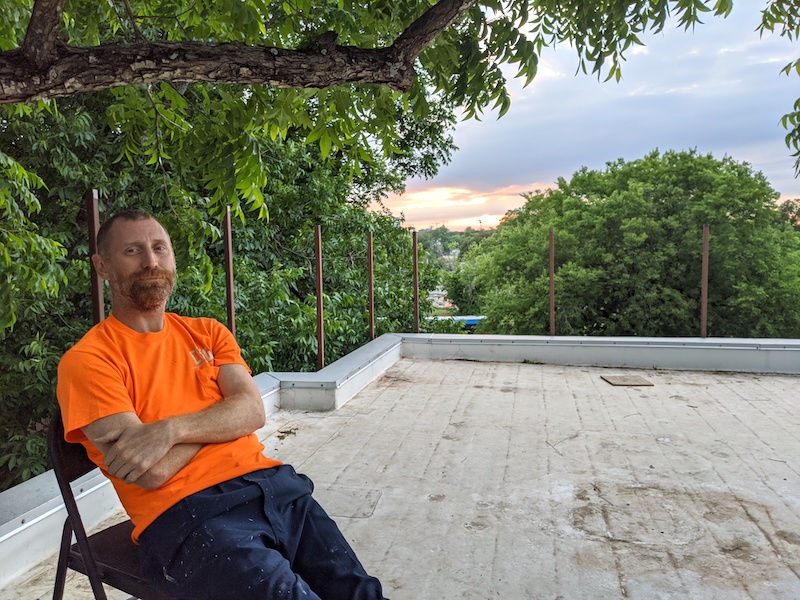 Then Andrew put the top rail up. This just made it a little safer with a grab bar around th perimeter. 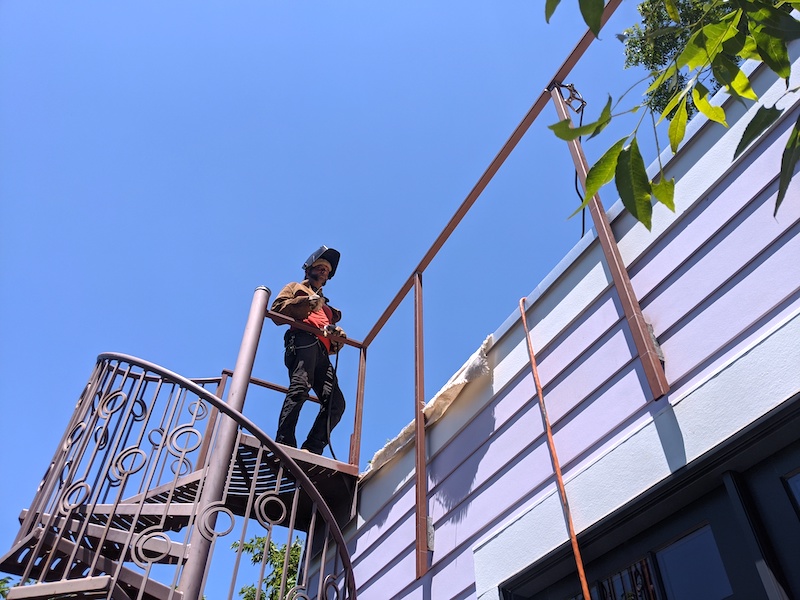 The pouch out made for some tough miter corners on the top rail, but Andrew got them exactly perfect, cuz he’s a badass. 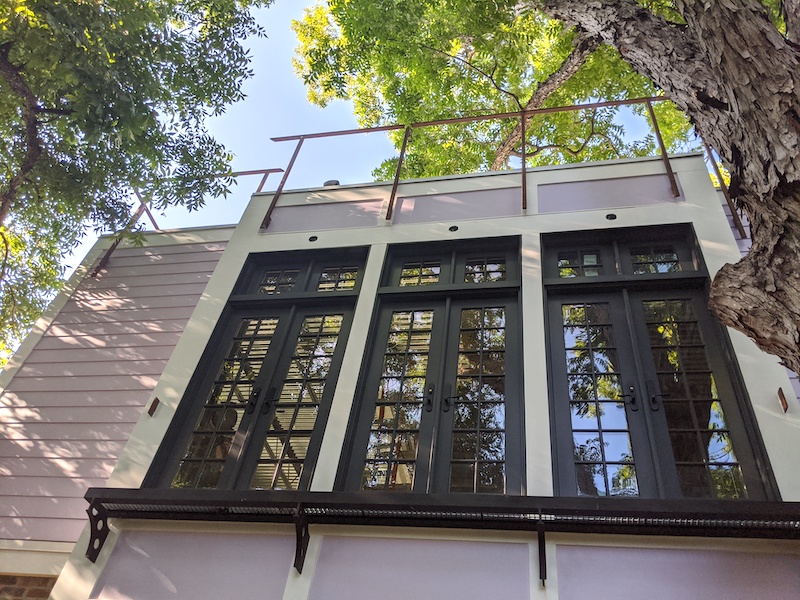 And here is the deck rail, which is that line there about a fifth of the way up the north-facing posts. That is where the deck will sit on the outside perimeter. Then when rain falls it will go through the gaps in the deck to the roof below and roll down to a big gutter that will stretch across the back of the building. 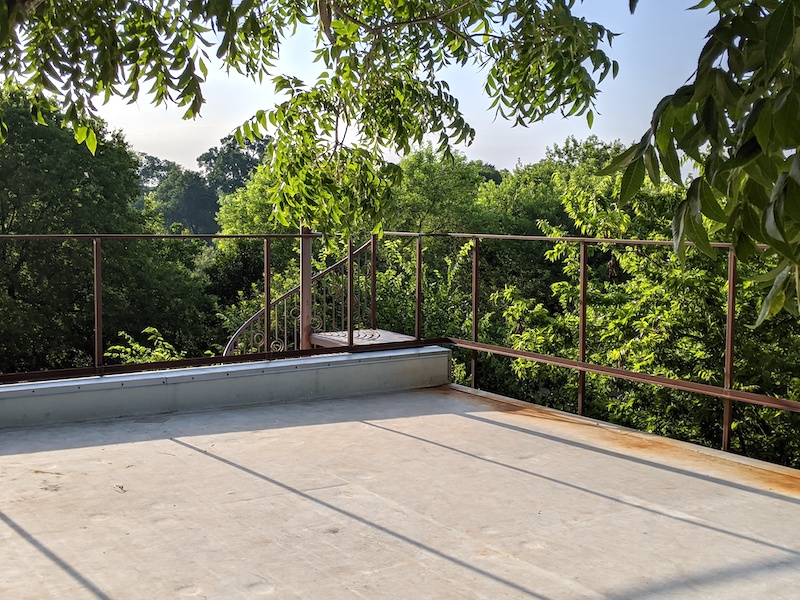 With the deck rail in, Errek was able to build the framing for the deck, and start laying it all out.

Here we see a tired man, surveying his progress. 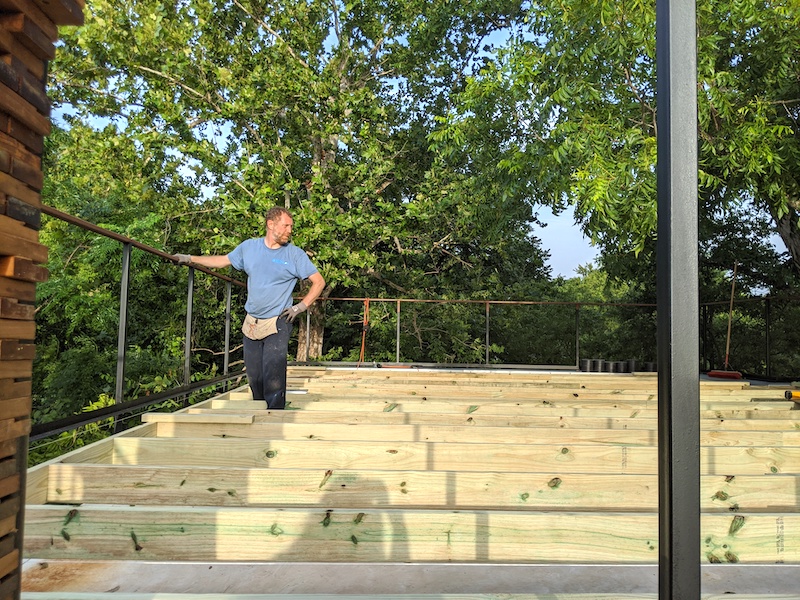 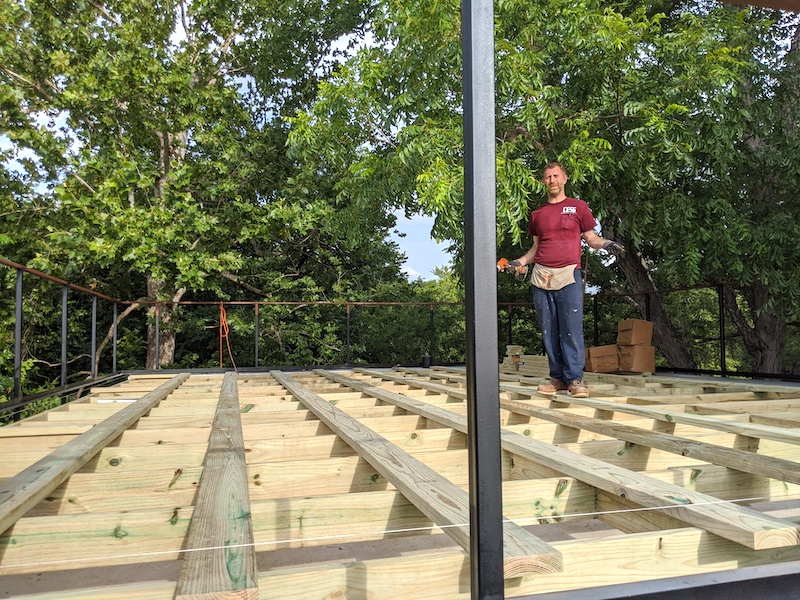 Once the frame was built, he laid it out, squared it up, and started building the deck. It’s Ipe square tiles, just like the twin second-floor decks, and laid in a checker board pattern. 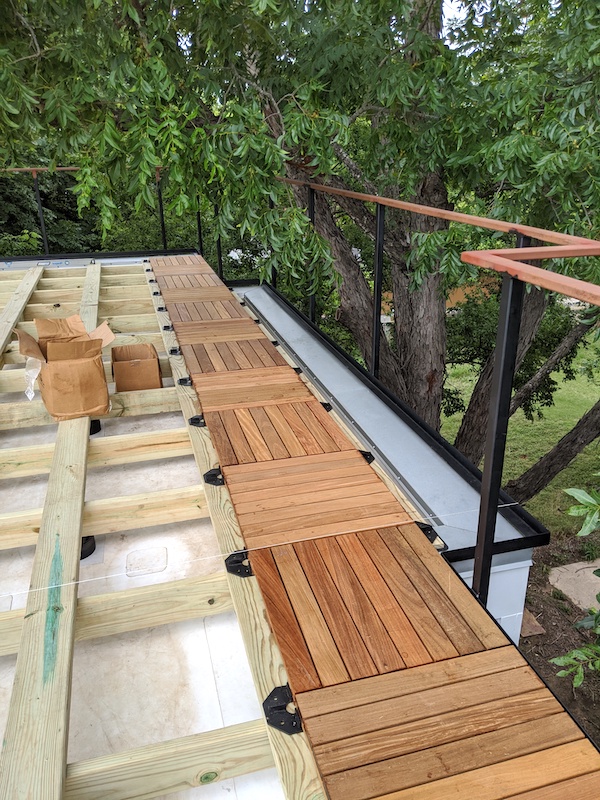 Started with a perimeter row. 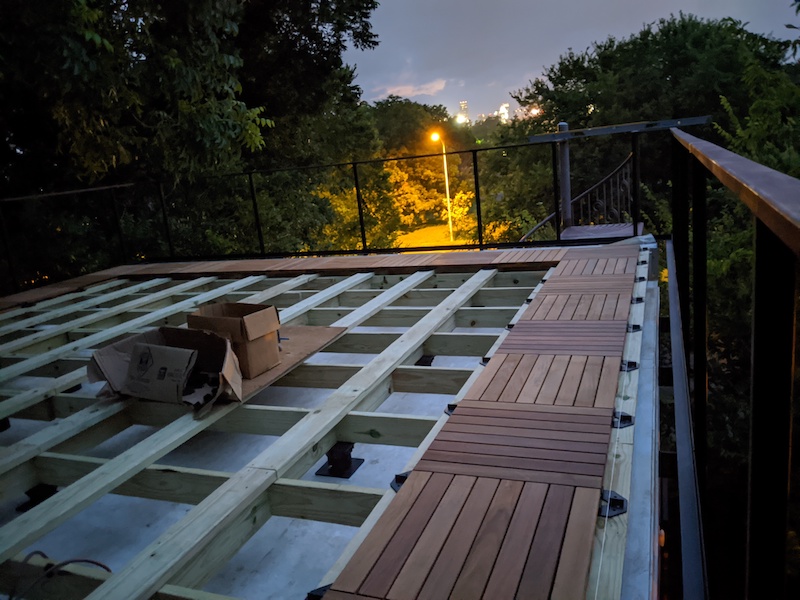 Then he filled in the center. 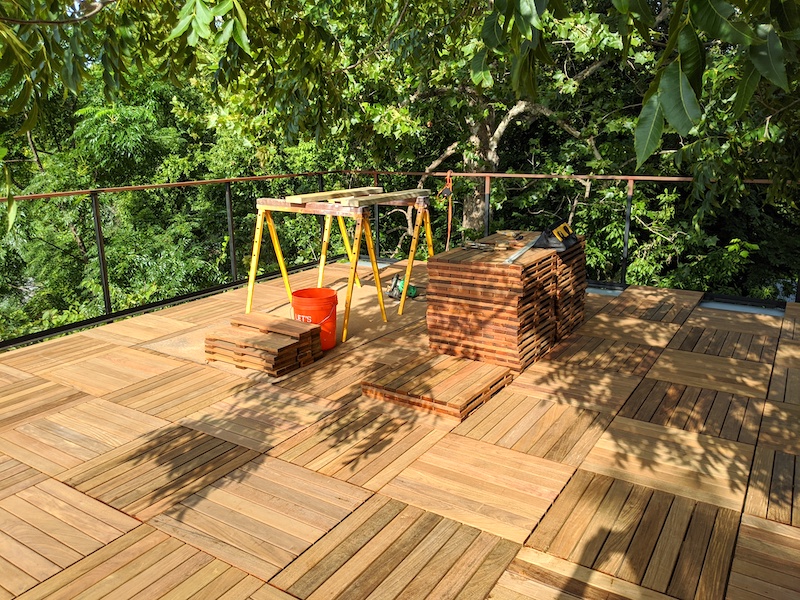 And cut the pieces for the partial edges. 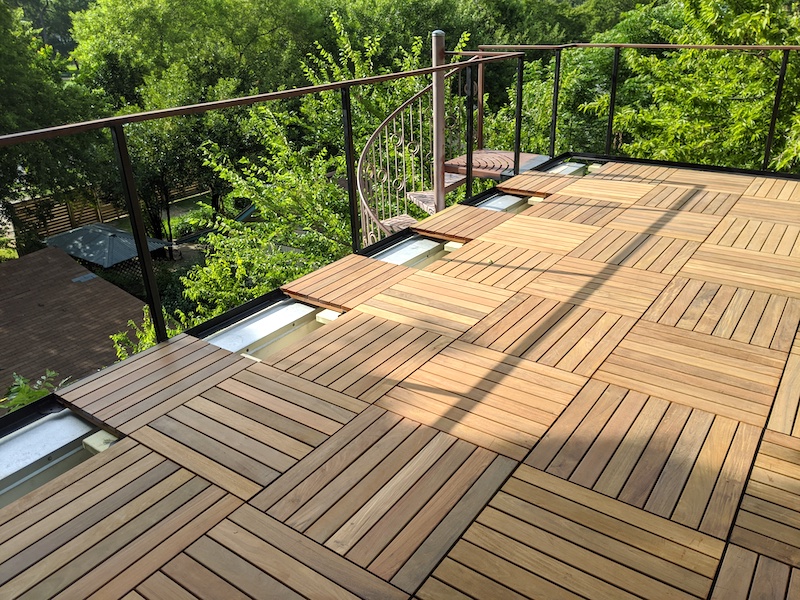 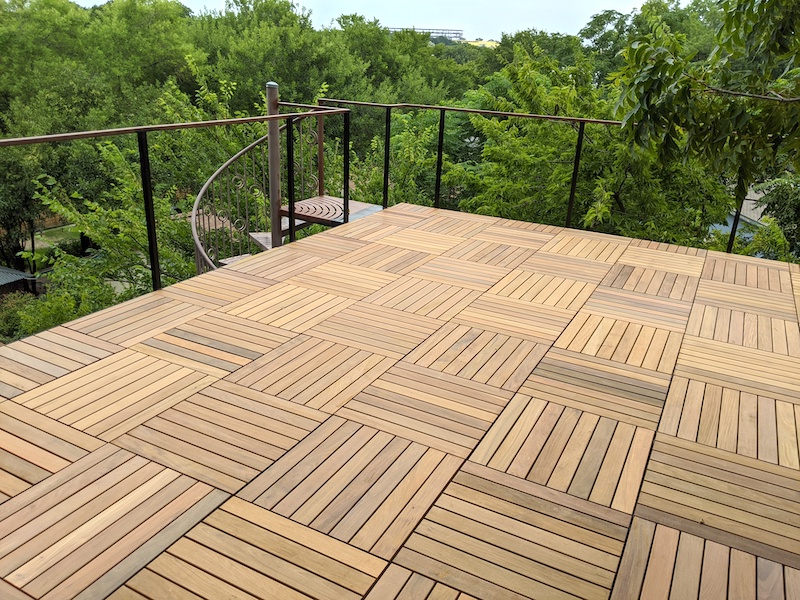 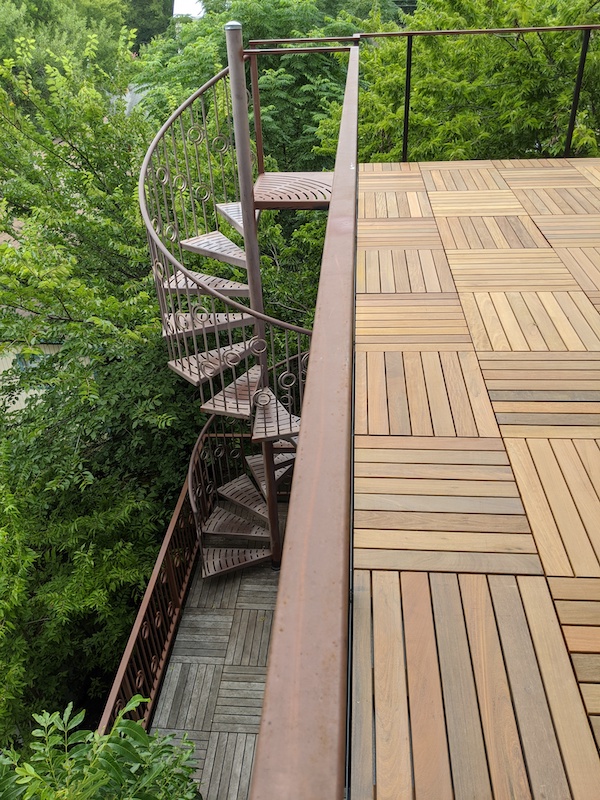 Eventually, the railing will happen, and it will have this same design as the railing on the second floor decks. Super pretty! 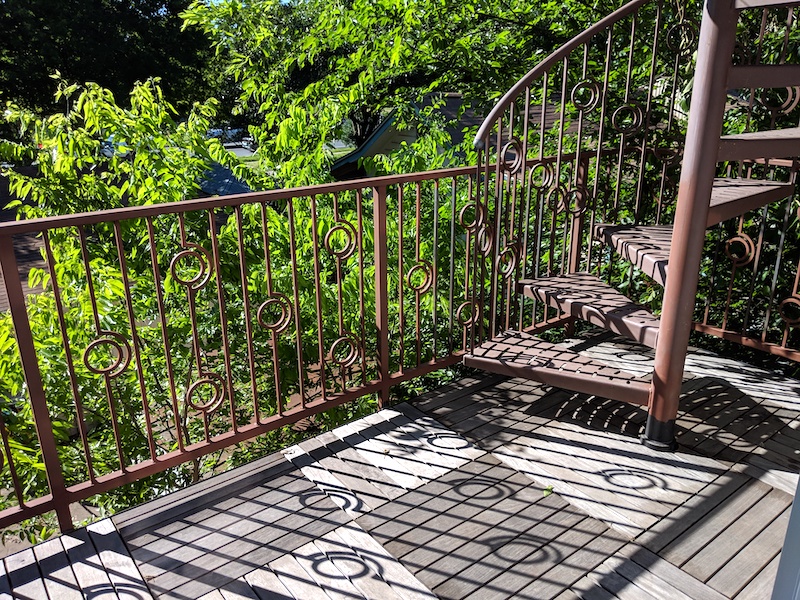 But for now, this deck is a whole lot more safe. Safe enough to come on up and watch sunsets like these. Also super pretty! 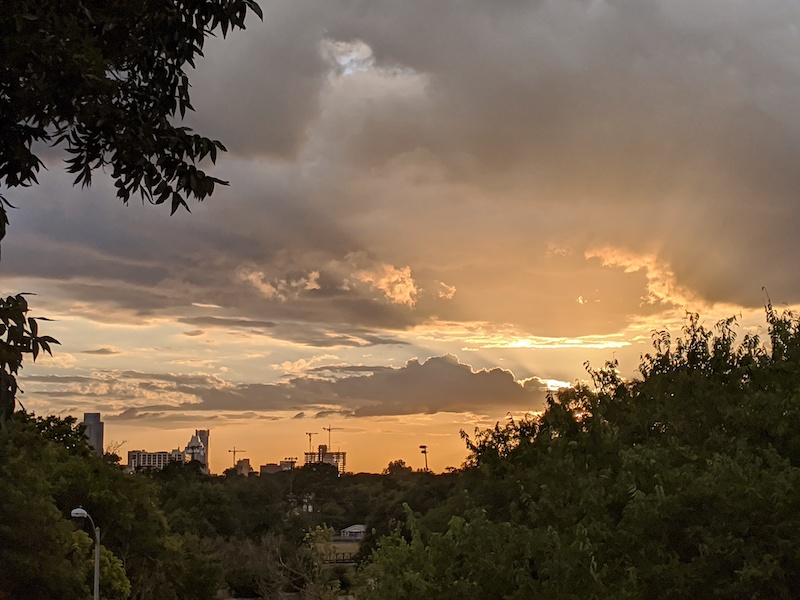 Well, that mostly brings us up to current, but I’ve got one more chapter with some other little details about the neighborhood and our curb appeal. So clickity clack to the next chapter, y’all.