Chapter 103: It Might Not Be Fast, But At Least It’s Pretty

Do y’all remember the Hernandez family? They were the wonderful family who lived catty-corner to us and were nice as hell and helped us a couple of times on the house, including that one time I had to rush Errek to the ER with a house-related head injury.

Well, they rented the house where they lived for 23 years. They probably didn’t pay much for rent, but the landlord never fixed anything and in this expansive clay, the house was falling apart. Back in, I’d say 2013ish, property values had skyrocketed in the neighborhood and the landlord decided it was time to evict the Hernandez family. So they were pushed out to Del Valle and some NYC Airbnb “Megahost” bought the land for a ridiculous amount of money and demolished the old house.

Okay, well fast-forward to July 2018, when something started happening at the now-empty lot across the street. 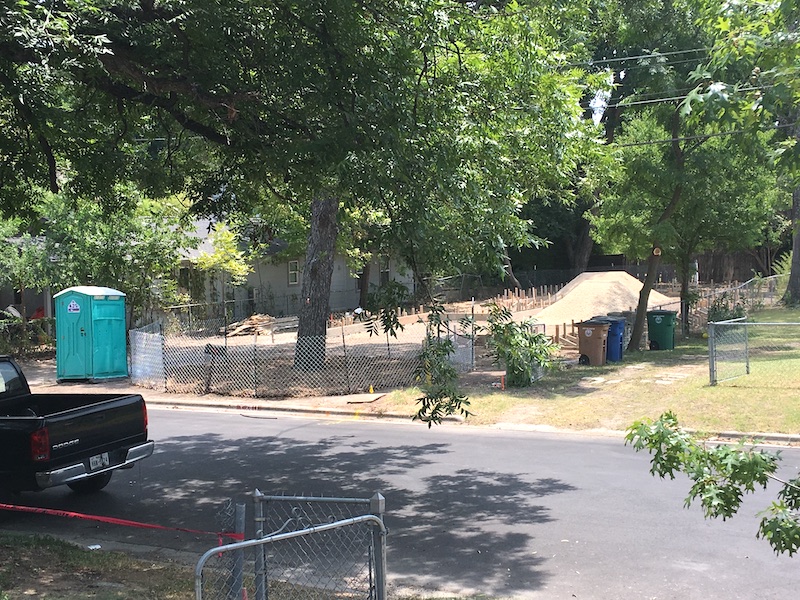 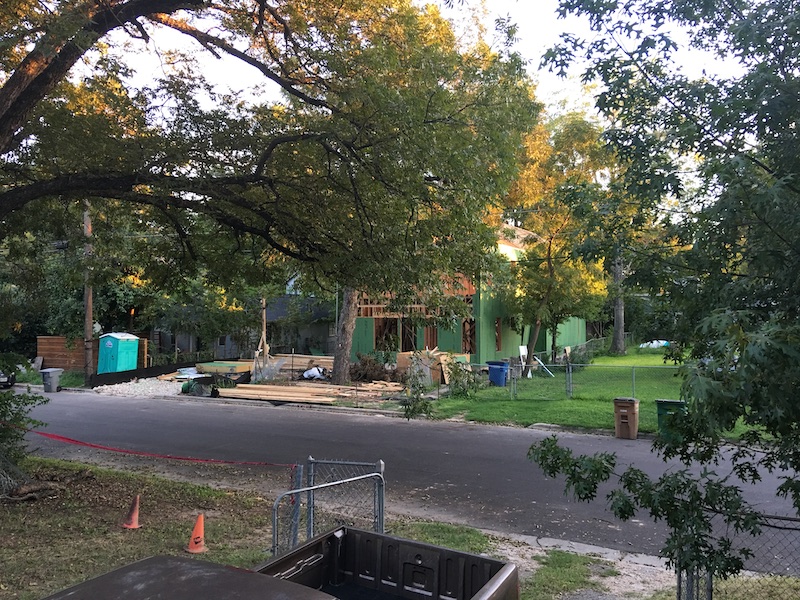 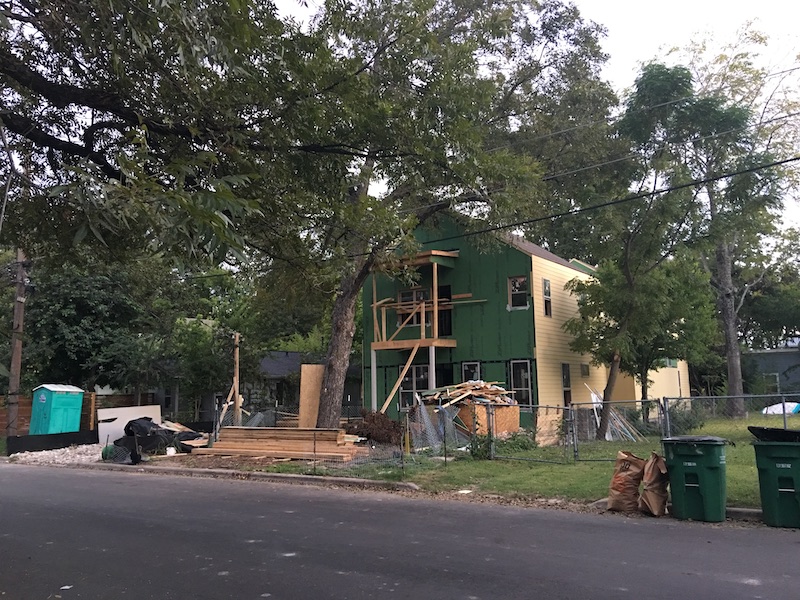 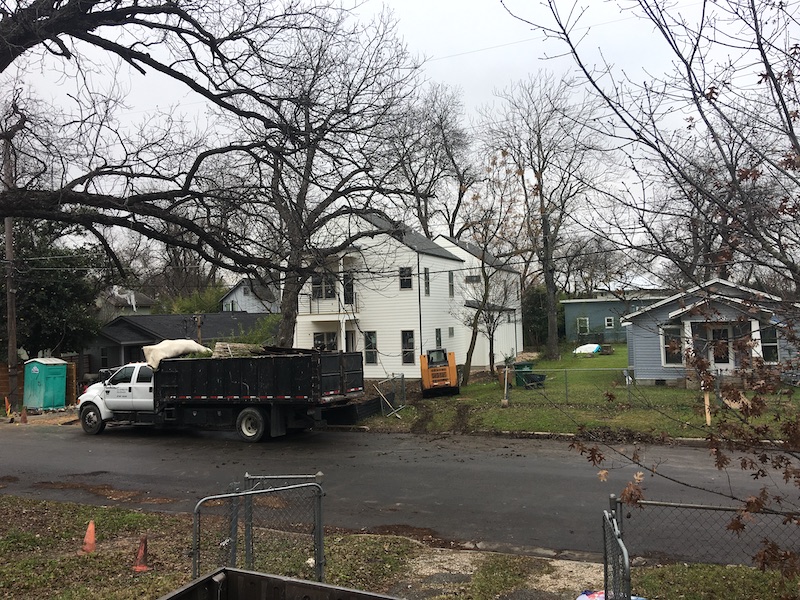 And by December 2018, it was done. In the time it would take us to finish one project and get one more inspection with the city, they’d finished a massive duplex. And by SXSW of 2019 it was renting on Airbnb for $800/night. 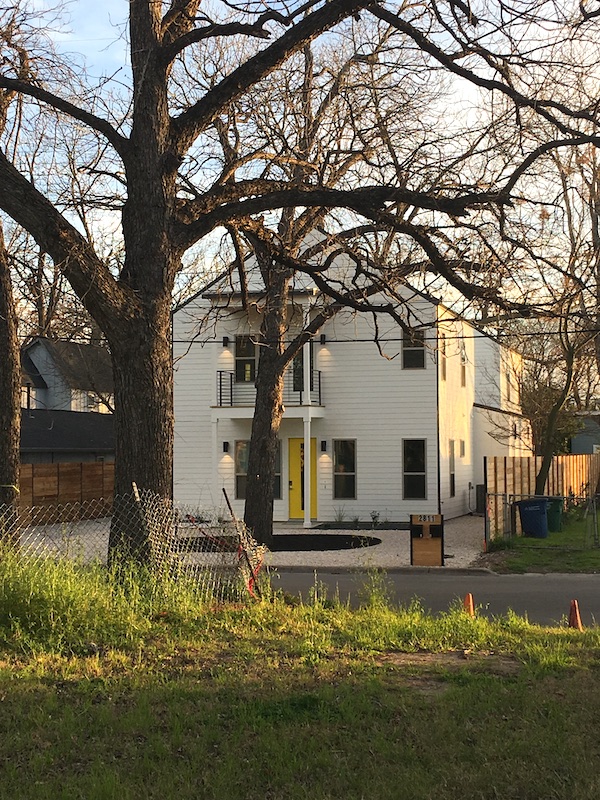 Yeah, so the streets been hopping with party buses for the past couple of years. It’s still party central now, even during this COVID-19 pandemic, when we’re supposed to be avoiding large groups. 🙁 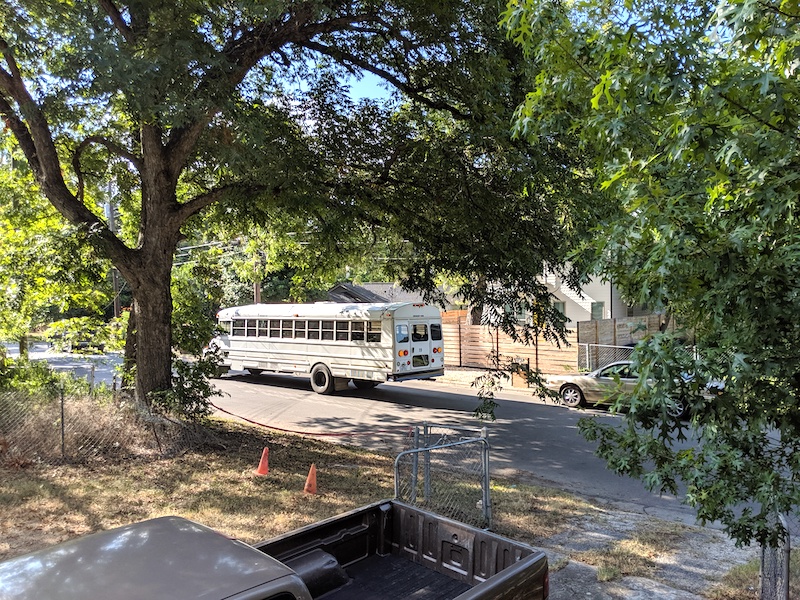 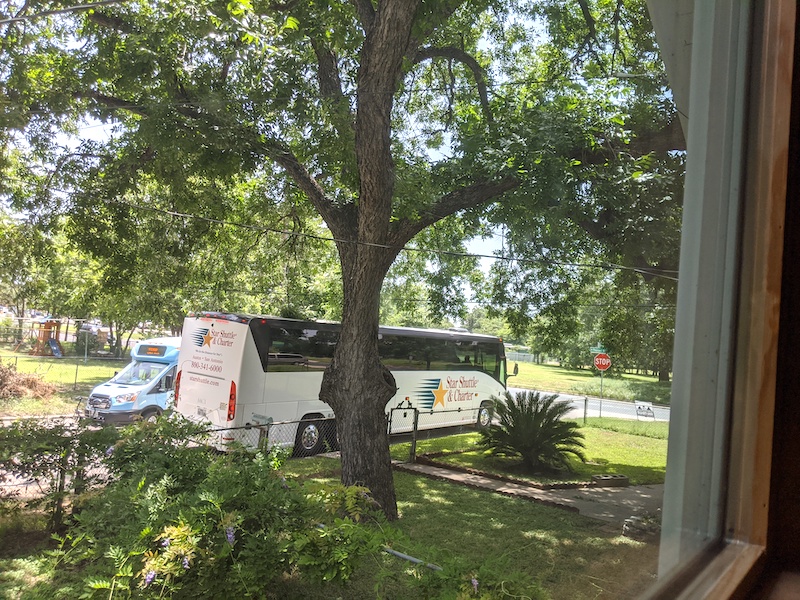 And speaking of COVID-19, this has been a weird year, hasn’t it?

This was the scene on Sixth Street—the bar where Errek and I met back in 2005—after the city (and later the Governor, too) shut down bars to stop the spread of the disease. 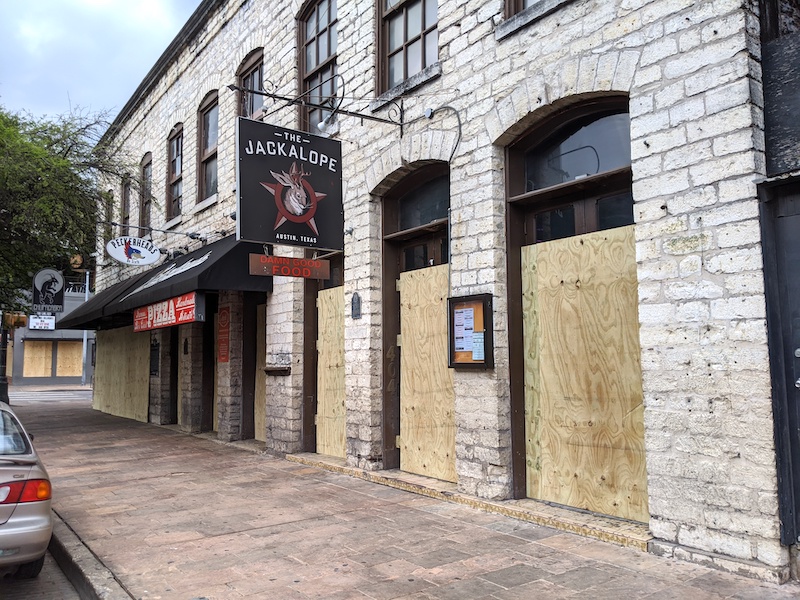 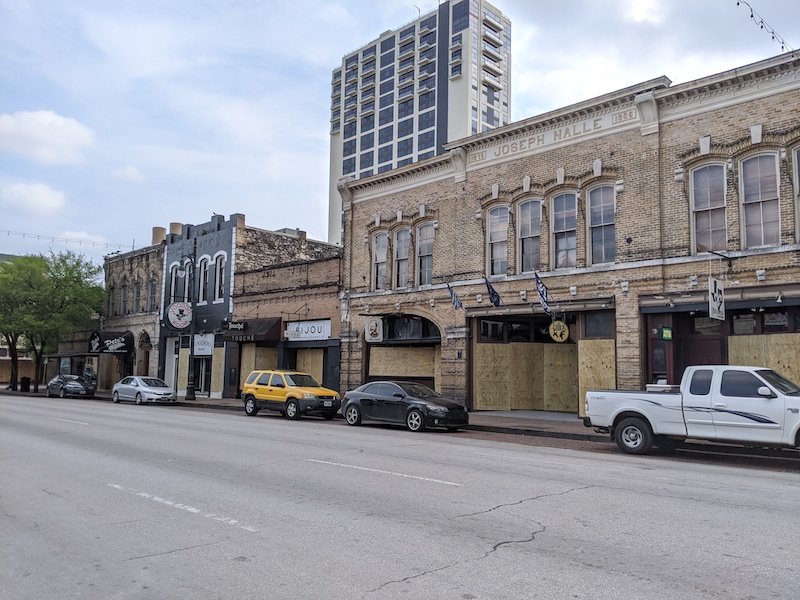 We’ve pretty much holed up on the house. Errek took some unpaid leave to avoid working at an overcrowded construction site while cases of COVID-19 skyrocketed in Austin. Then, the week after he went back to work, I got laid off. *sigh*

But it hasn’t all been bad. We’ve got each other, and still seem to enjoy living together, which is awesome. I’m about to publish my first novel, which is also awesome. And we have amazing friends who flutter around town like Quarantine Fairies, leaving care packages on porches like ours. 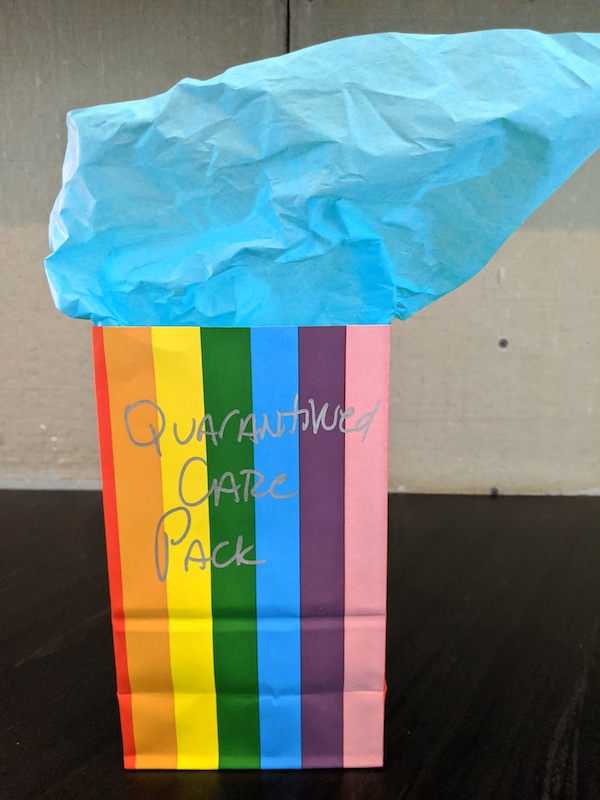 Errek had surgery on his sinuses and within a day, he was back to making his famous chili. 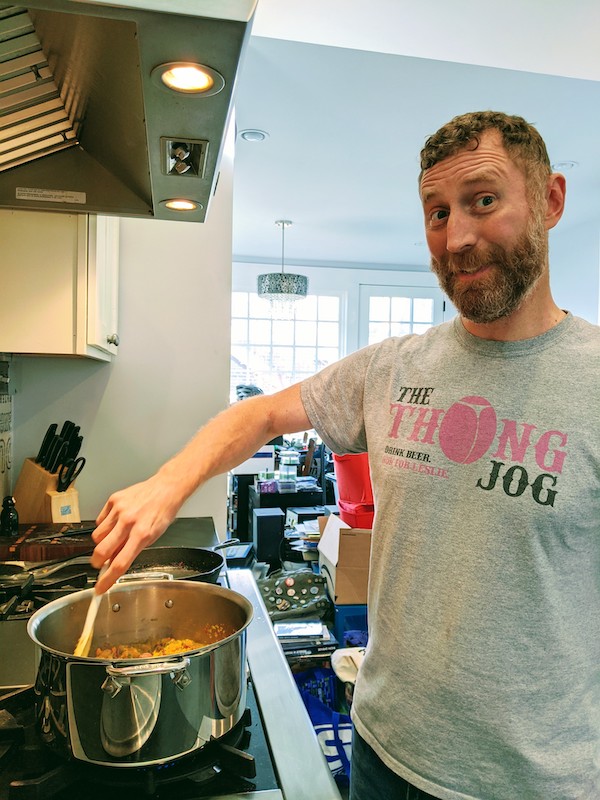 And, we’ve made all the progress on the house that I’ve already detailed here, plus a couple of improvements to the curb appeal of this place.

Starting with gutters, and a cute little fishy rain chain. 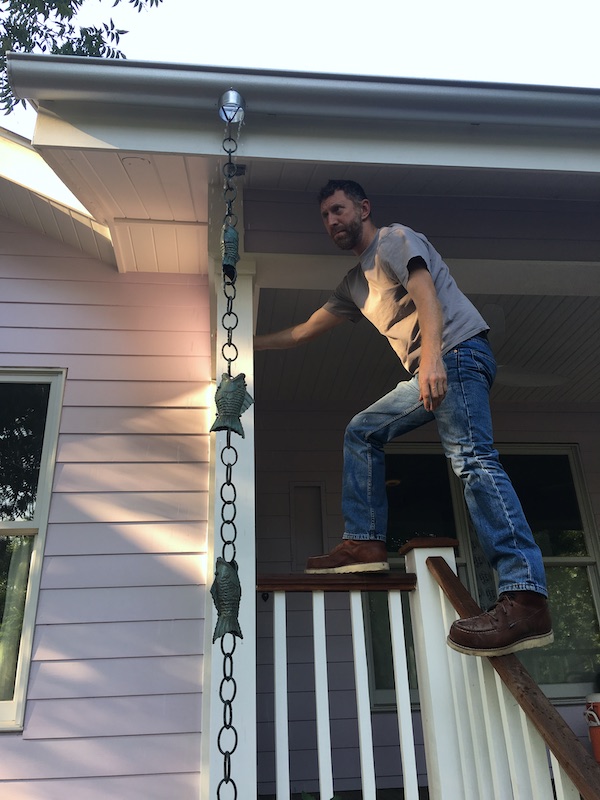 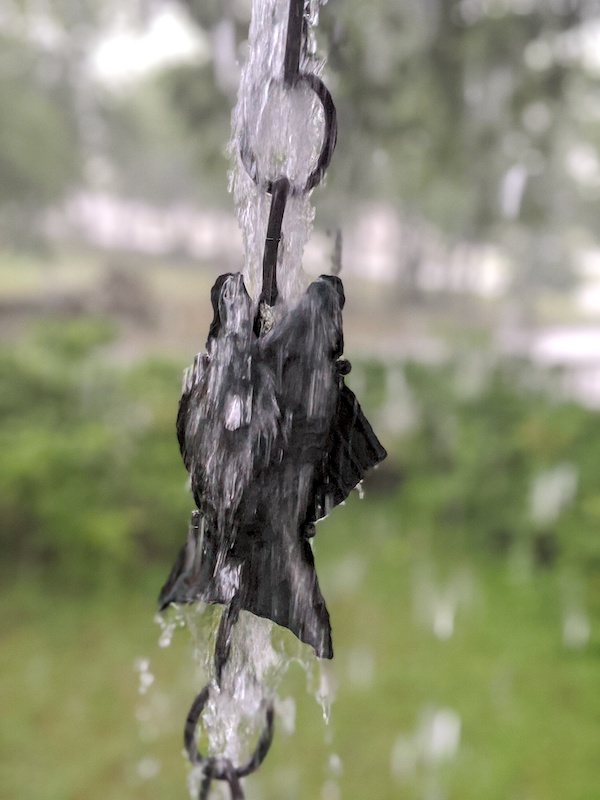 And a project which has been long overdue, we put window trim up on the main house. 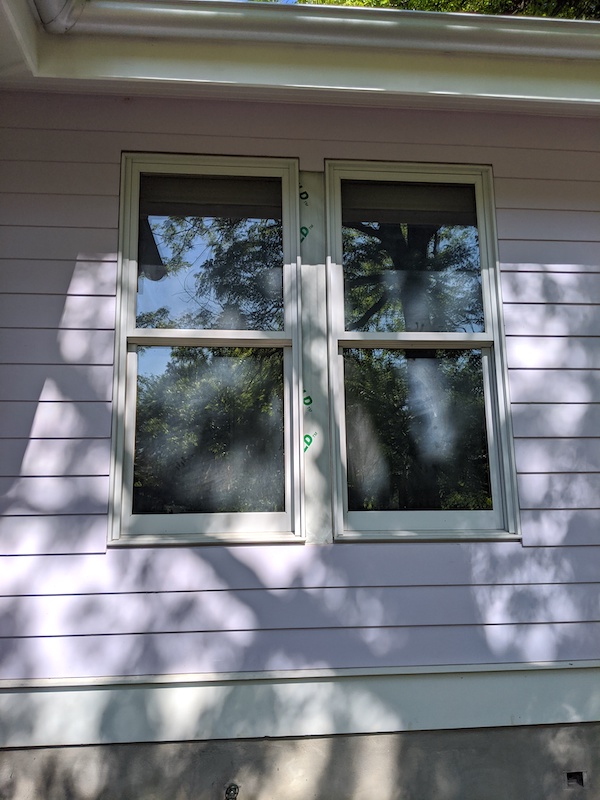 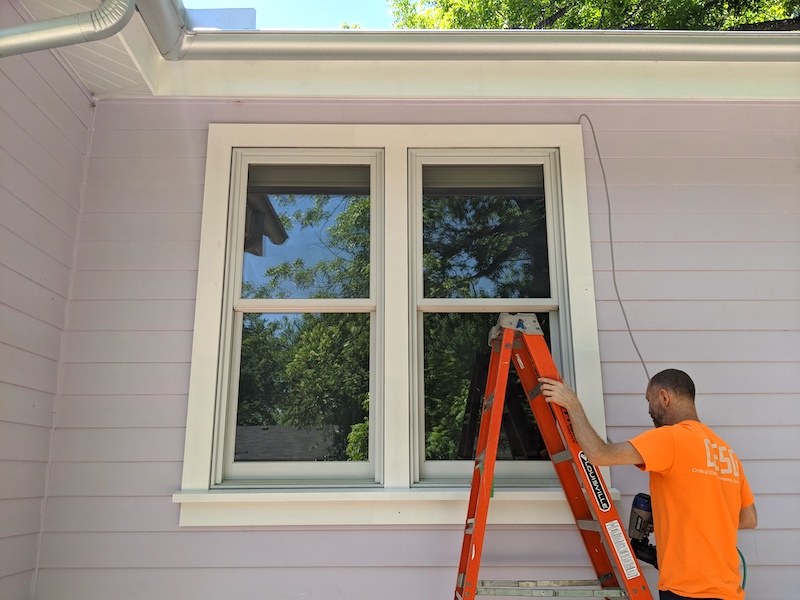 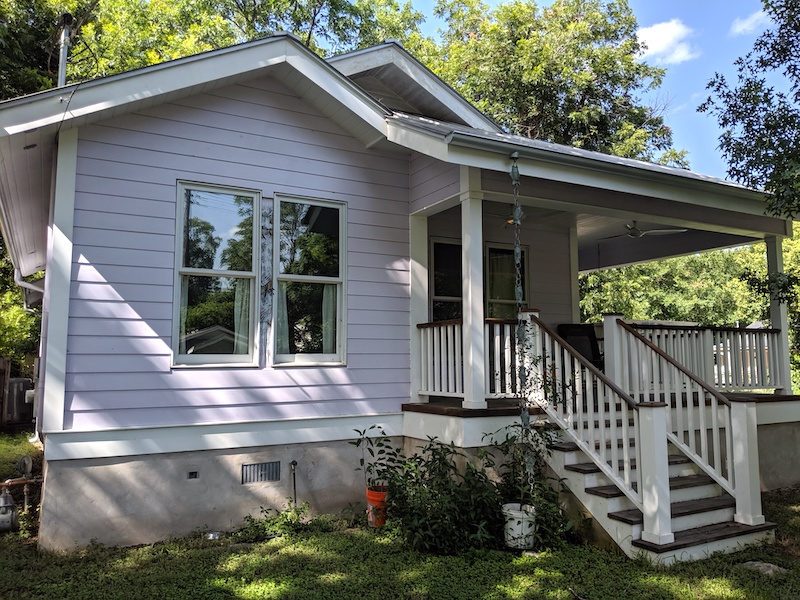 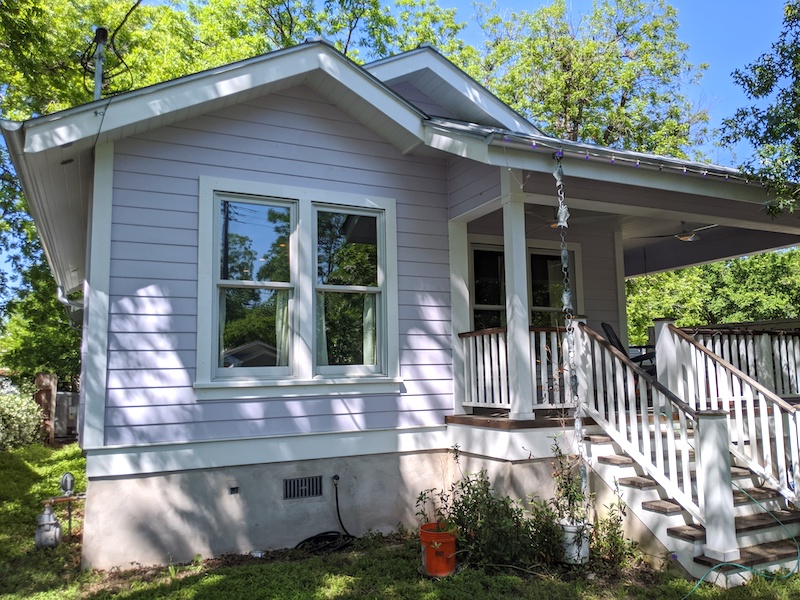 But, not everything around here’s changing.

Our yard is still a three-ringed circus for the animals of the neighborhood.

Blackie Lawless is sweet on the Outstairs and loves to come chat with me up here. 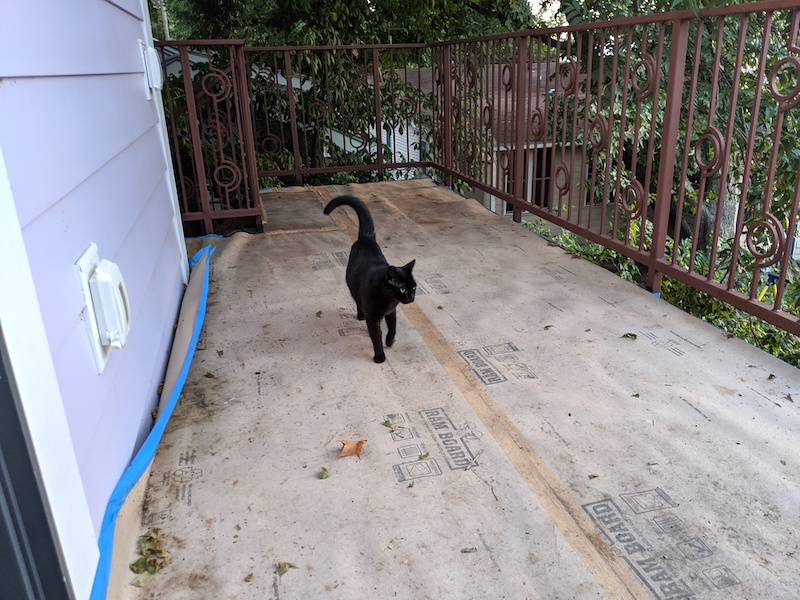 Nalla and Young Neil at an impasse. Found out later that Young Neil is a lady cat. I know because she mommed a kitten I call Steve (who is adorable and impossible to photograph, sorry).

Why did the chickens cross the road? Because everyone wants to be at PVR! 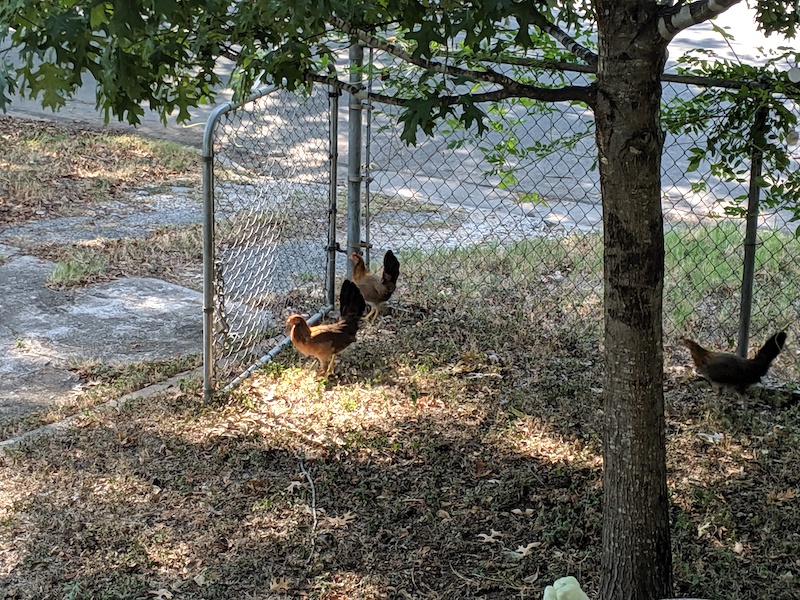 It’s those caterpillars that munch on all the leaves, looking majestic. 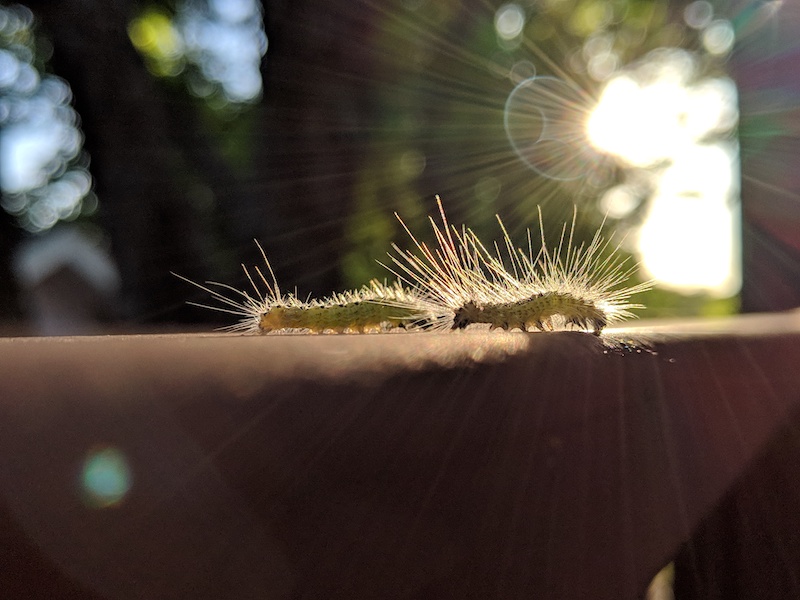 Our Halloween decor remains the same, too. Saucy Jack is still in the bath beneath the Lucy Tree. 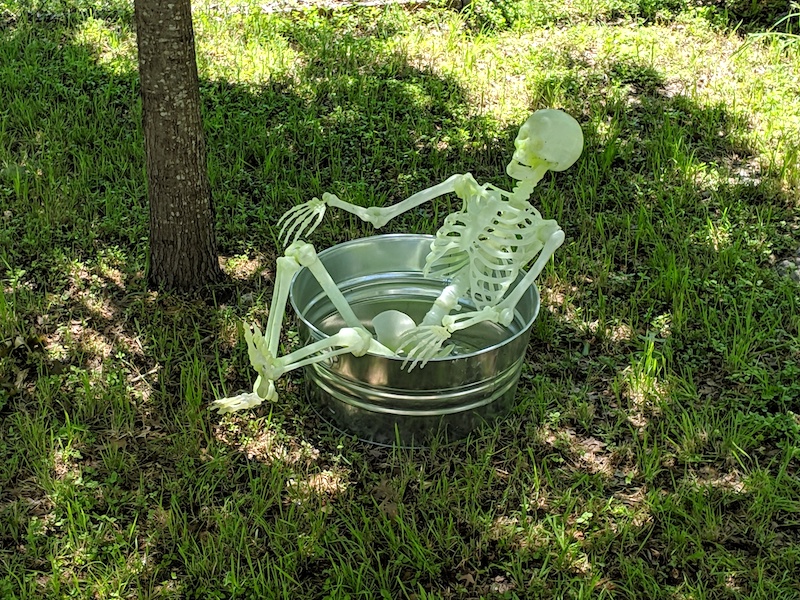 Beatrice the Busybody Neighbor and her boyfriend Tim are still staying in the front bedroom, waving out the windows. 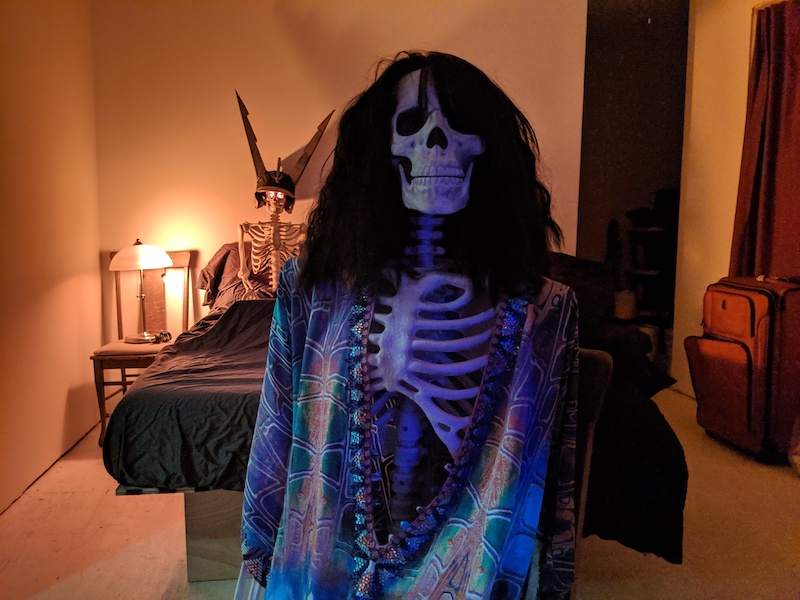 Clark tried to help us hang some new lights. 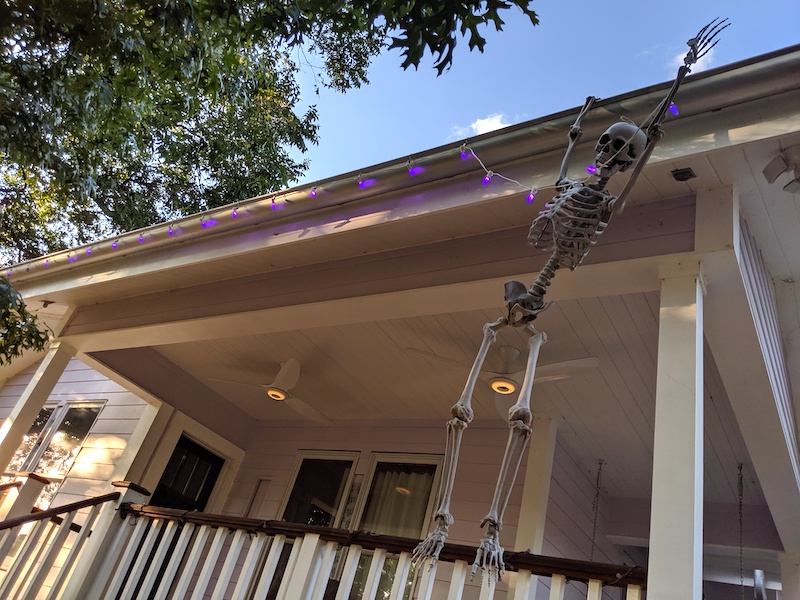 But he fell down on the job. 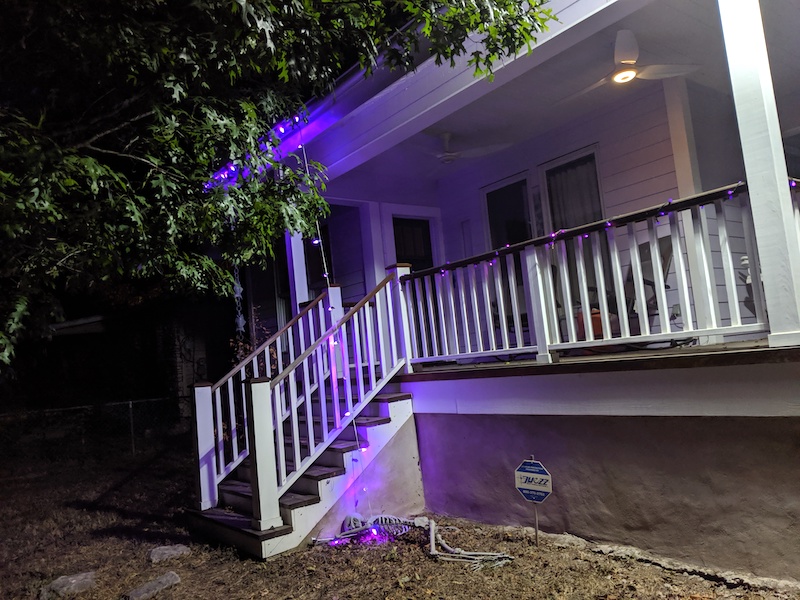 So I stuck him in the beastly wisteria. 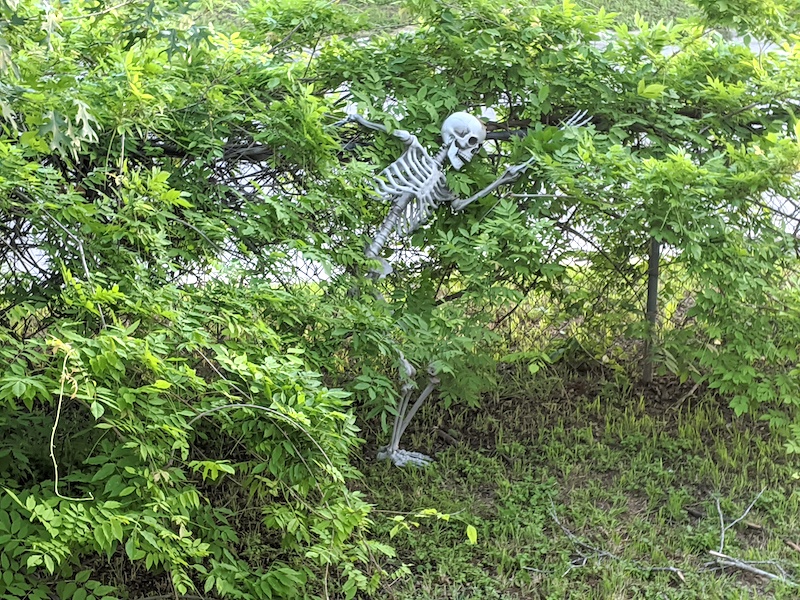 Sorry, dude. But damn, look at that wisteria! 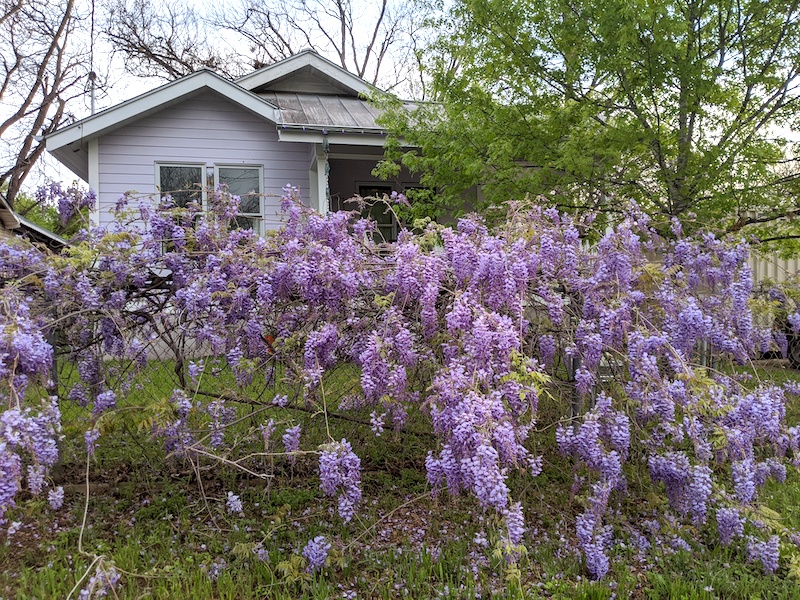 And, well, that’s about it for now. As I leave you, we’re still in the midst of quarantine, so I will share a little of the love I found in that quarantine care package on the porch. 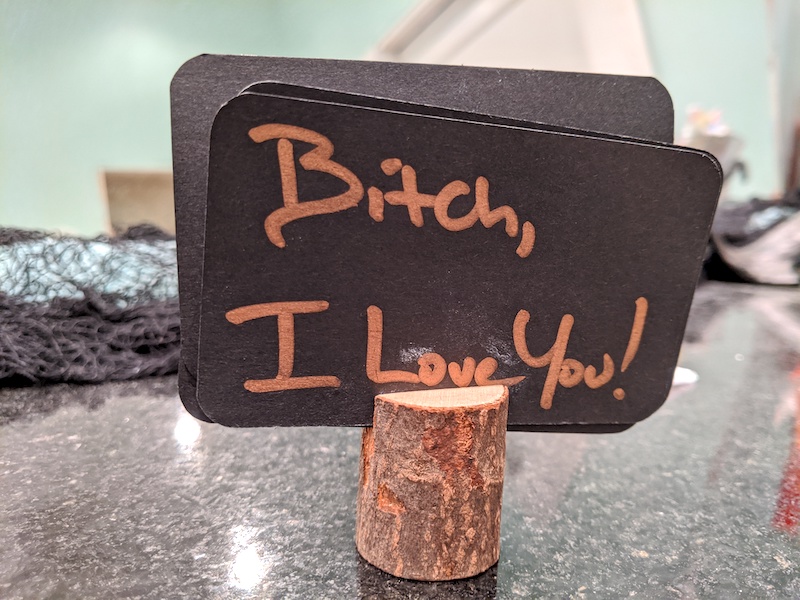 Take care of yourselves, y’all, and take care of each other. You matter. Lots the love!