Chapter 11: Can We Get a Shower, Please?

When last we left you, gentle reader, we had accomplished the necessary toilet installation and some stray cat (whom we’d thought was a boy) was getting all impregnated on our porch. Since then Oscar’s grown quick a fat prego belly, and Lucy (our 18 year old declawed, half blind, mostly deaf, indoor, spayed, virgin kitty) has claimed the porch as her own. 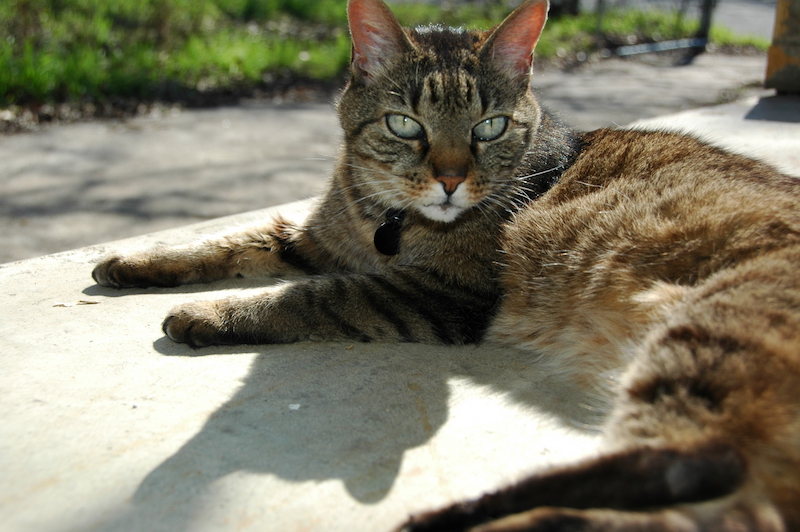 This was no easy task, and the endless tiling turned out to be the least of our troubles, though it was the most time consuming part. Here’s how that whole thing went: 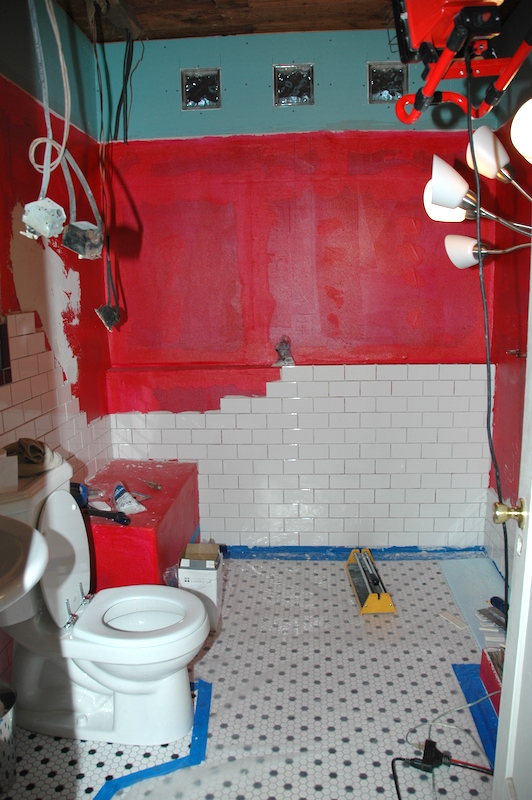 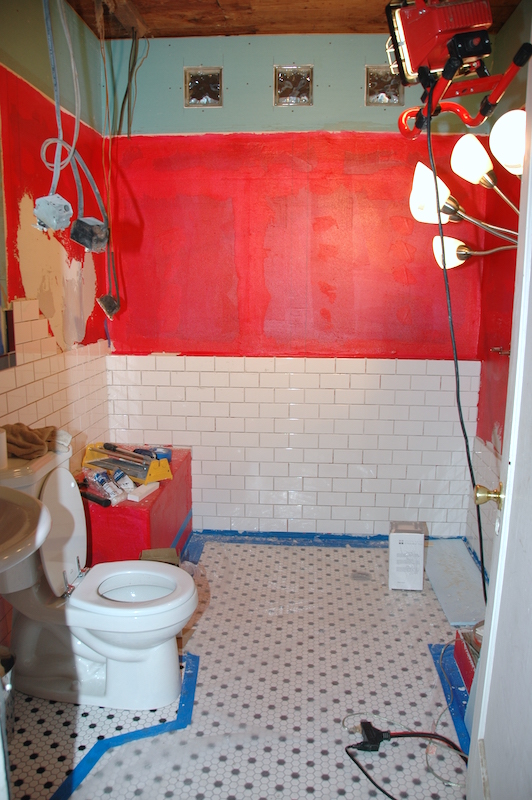 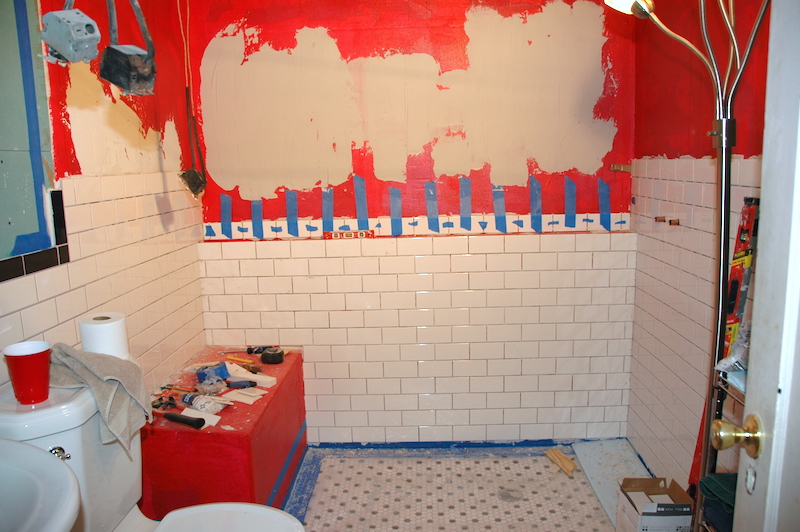 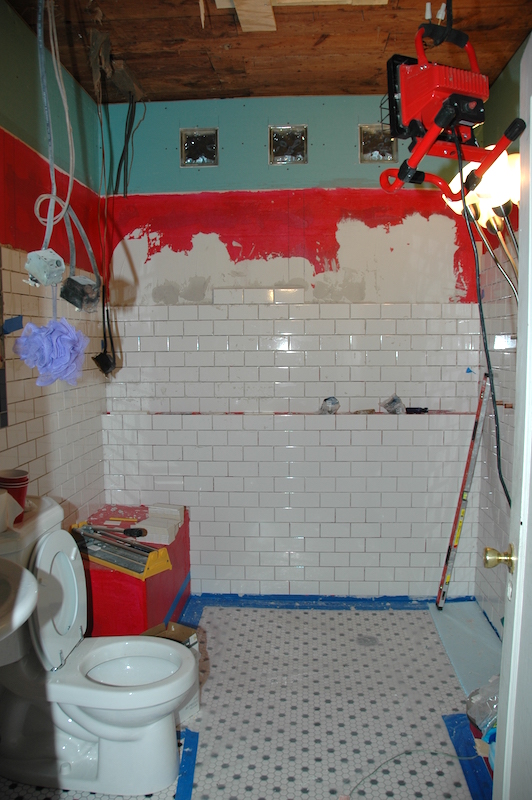 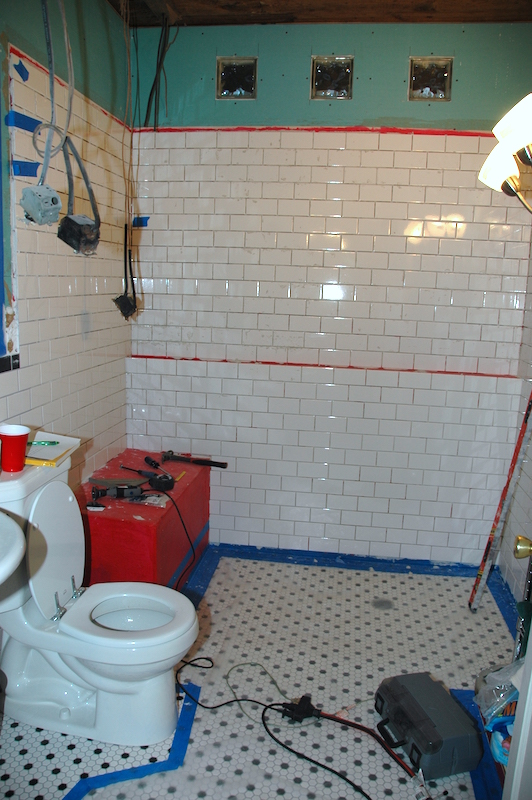 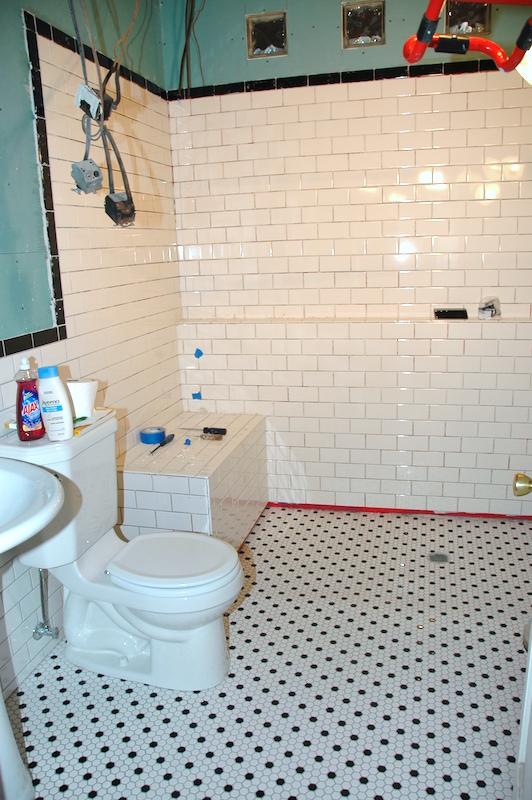 Yay, everything’s tiled now except for the very bottom row, which had to be cut to fit. Bleh! But, never fear, this is but a single pained task in this endless journey to awesomeness. And speaking of awesomeness, check out that black stripe. I heart it, and at the rate things were going I thought we’d never see it. Now, time to grout. 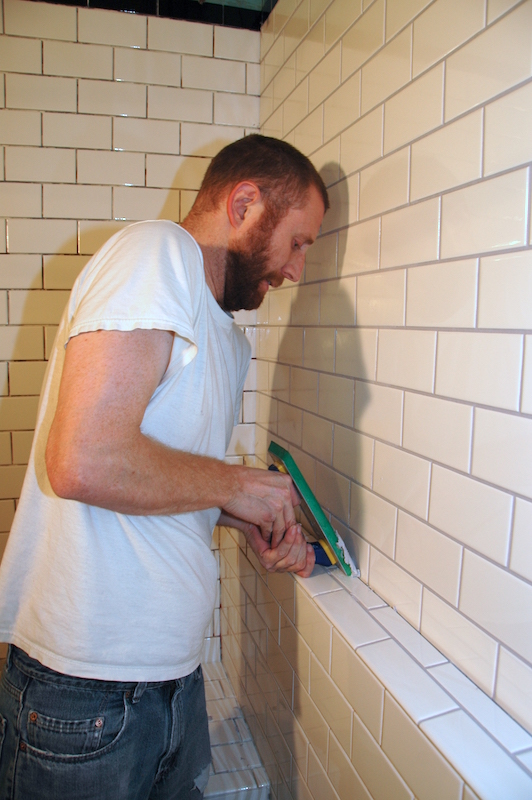 It’s funny, everyone told us that the grout would be the hardest part. Perhaps because we had these high “hardness” expectations, it turned out to be the easiest step of all. Well, I mean it was exhausting (for Errek) to push that grout float all over, but otherwise why was the grout stuff supposed to be so hard? Well, the reason for all the warnings was because, as usual, we opted for overkill, and got this badass epoxy grout which is:

Long story short, it’s good stuff, but you have to clean off the “residue” really really well or it will forever and ever look horrible…or something. Anyway, we heeded the warnings and never had a problem. Hello, beautiful grout.

Caulking, on the other hand, turned out to be a real bitch, probably because everyone made it sound so easy. We got cocky, and then we got this. 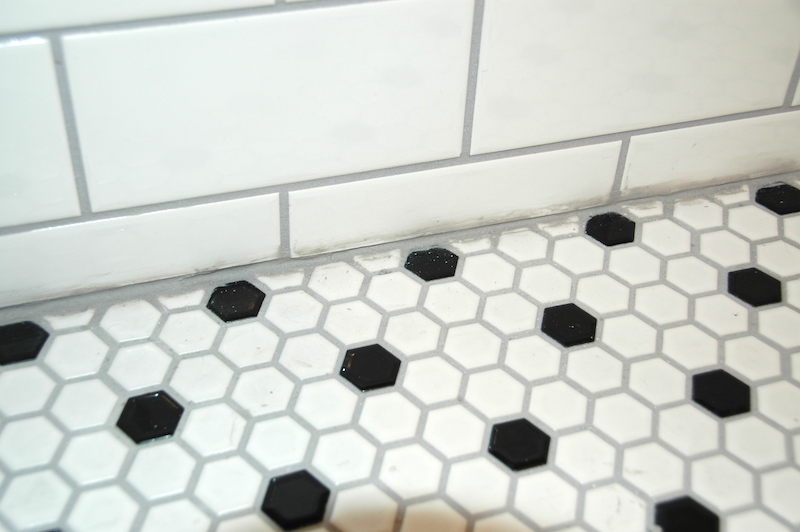 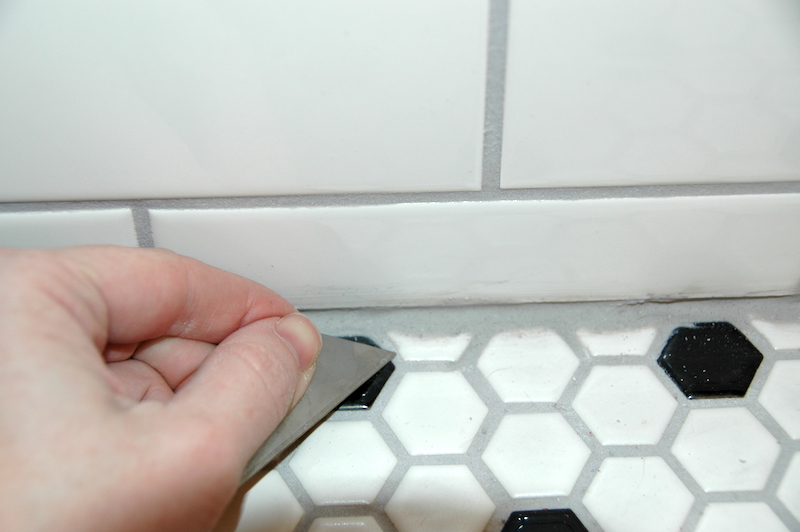 But what’s this? In the meantime, Errek got busy installing “Giles” our English shower head. 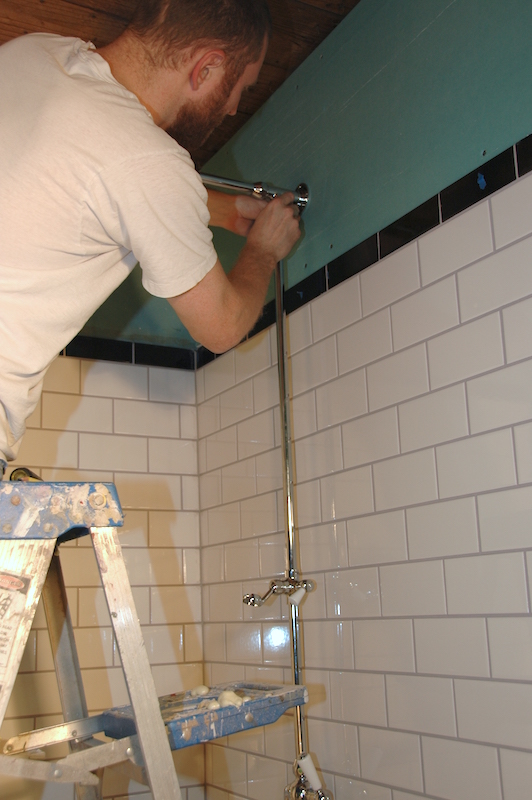 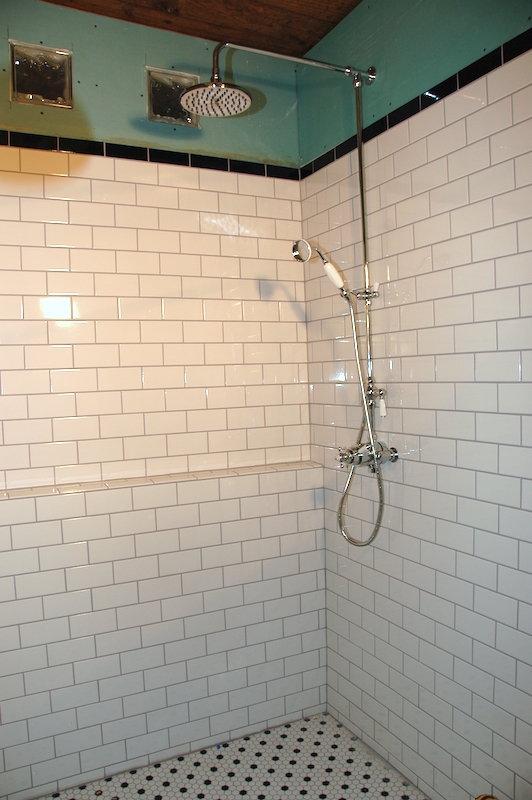 Fun with the shiny shower surfaces. 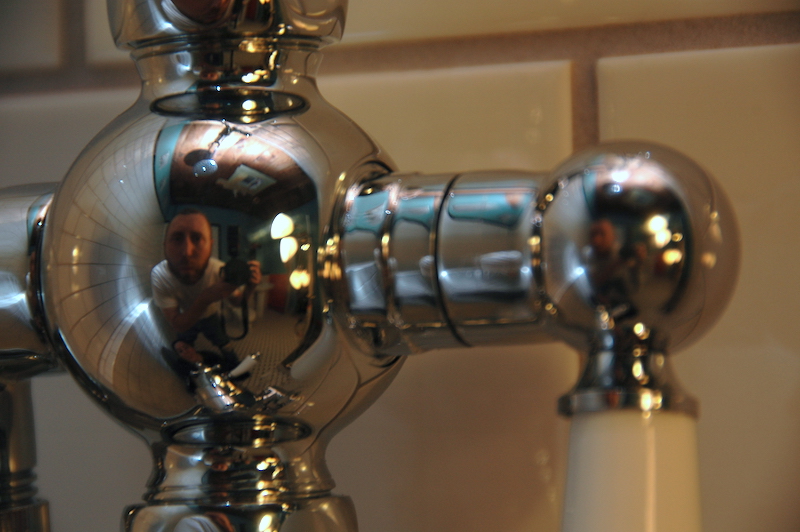 Now back to work, Errek dons the kneepads and climbs into the crawlspace to connect the copper piping in the walls to the PVC in the crawlspace to tie the shower into the water supply. Meanwhile I stand outside the crawlspace, fishing my camera through the joists so that I can harass him with my flash. Tee hee hee. 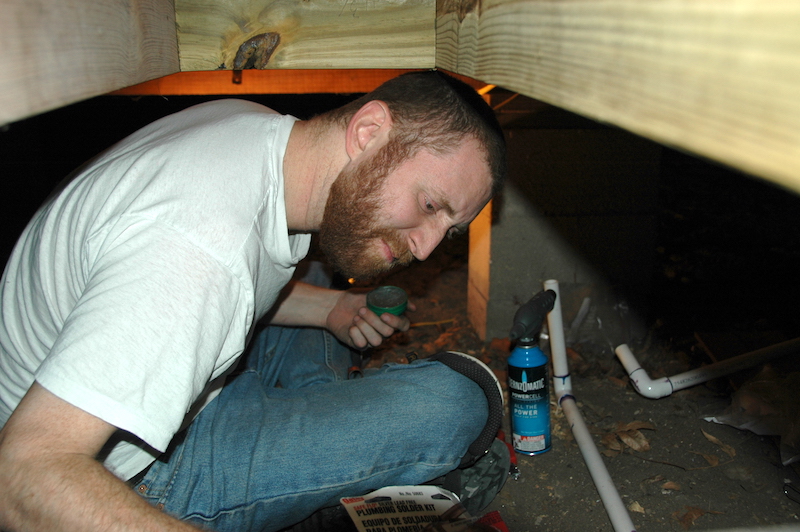 And when the plumbing glue dries, it’s glorious. Glorious, I tell you. 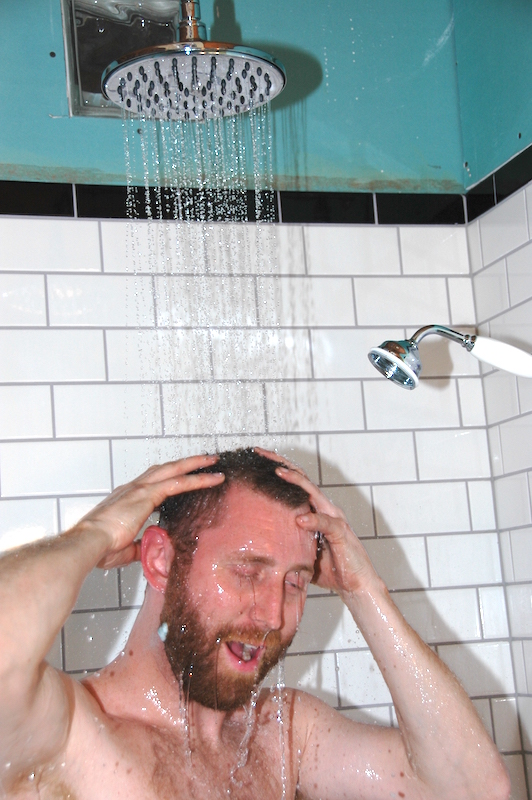 Best shower ever! Or so I was told, because after that shower, disaster struck. I mean it couldn’t really be that easy could it? Apparently not if the house had anything to say about it.