So, here’s how it happened:

When we were tying the shower hot and cold into the system we added a back flow valve in order to be up to code. This valve helps protect the city’s water supply — once water comes into your home plumbing system the back flow valve keeps it from running back into the city supply.

It’s a good idea, in theory, the problem is this when you use a water heater it heats the water (duh), and when water it heated it expands. That now expanded water needs somewhere to expand to otherwise your water heater would explode, and that’s never a good thing. In an old system the water would just back up into the city pipes, but with a back flow valve, your system is now closed and there’s nowhere for your expanded water to go. Fortunately, water heater makers have devised an ingenious method to avoid exploding water heaters. It’s called the TPR (temperate pressure relief) valve and how it works is it opens up and water gushes everywhere until your pressure is all good, then it closes again.

Well that’s all fine and dandy (wouldn’t want an exploding water heater) except that our water heater is (as of this year) 20 years old and the TPR valve was completely corroded, so it opened and water gushed everywhere (unbeknownst to us), but when it went to shut itself off again it couldn’t, the corroded valve instead broke. Thus our water heater gushed water into our driveway for about an hour while we watched Buffy the Vampire Slayer inside. It wasn’t until I went outside to hang with the cat that I heard the water rushing. That night we had to shut off the water, go to sleep, and dream of perfect showers, knowing that tomorrow we had a hell of a project ahead of us. 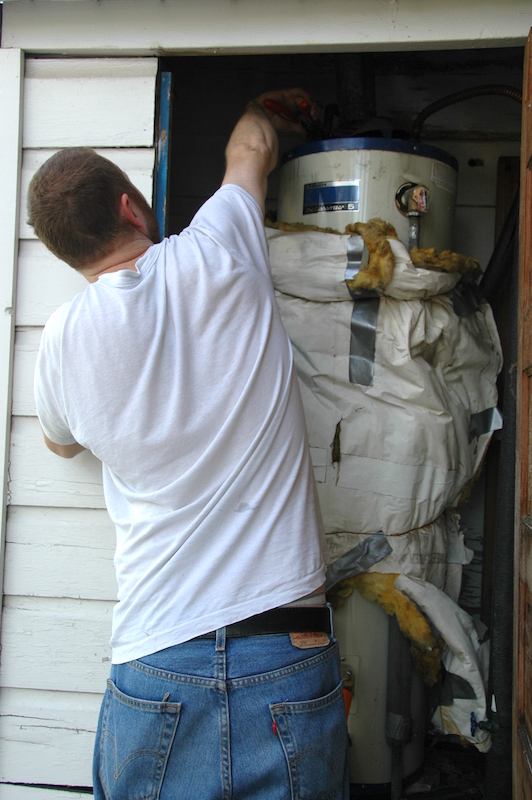 Now this water heater had already given us a run for our money. When it was time to first turn it on we found that the pilot gas line was pinched AND the emergency gas shutoff doohickey was faulty, creating a wrong place, wrong time situation (and a big honkin fireball) that sent me screaming and singed Errek’s eyebrows. Sadly, I did not have my camera at the ready, so this warning label graphic will have to suffice. It’s surprisingly accurate. 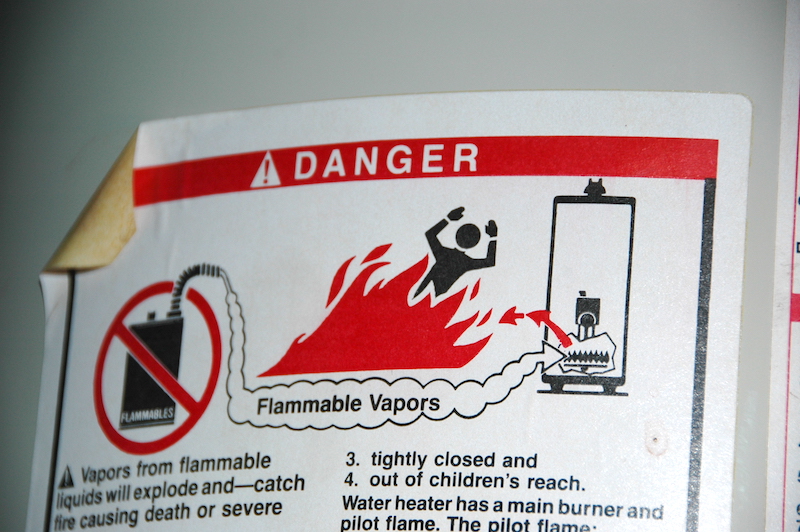 So it was with great caution that we approached the water heater yet again. This time we had to read up on water expansion and blah-de-blah-blah crap about water and pressure. Errek, a fan of physics, seemed to enjoy the challenge. First, we had to replace the temperature pressure relief valve, because it was stuck open and we’d have water rush all over the place anytime we turned on the water. Second, we had to learn all about how water heaters can expand within a closed system (a system with a back flow valve on it). To do this we had to drain the water heater and pull it out of the itty bitty closet it calls home.

This alone was a challenge because the little drain at the bottom of the water heater that allows you to empty the tank (thus making it light enough to lift) was also clogged with sediment. Errek turned it and nothing happened, and then kaboom! The pressure of the water on the drain valve popped the screw out and sediment filled water came out in a mad geyser. Fortunately the exploded screw missed Errek’s head, but the geyser found its target, all over his face and shirt. I’m pretty sure this water heater is possessed by a demon who hates us.

In the picture below, you can see the dried white sediment spray all over the green window trim. It was all over Errek, too, and it was really gross. 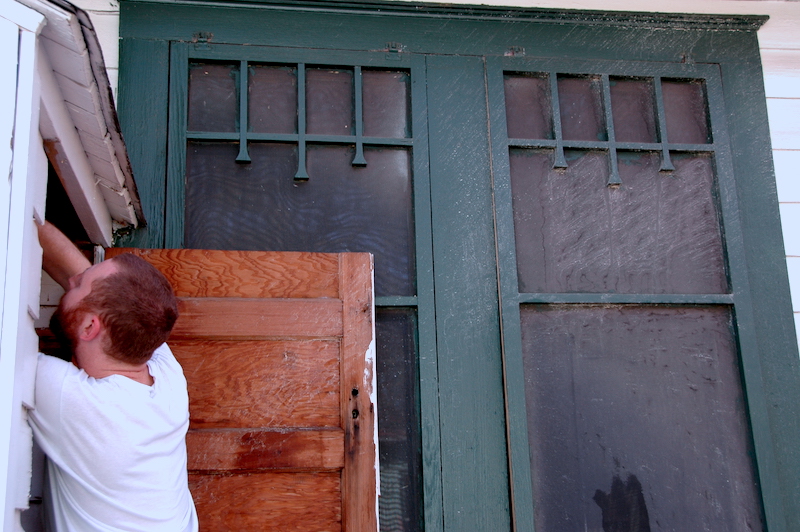 Now, dripping wet and a little gritty, Errek became defiant and a little pissed. If an entire house could not bring him down, he was damn sure not going to be conquered by some twenty-year-old, thirty-gallon water heater. Oh no, he pulled that beast out of its closet and poured rust and calcium remover into it for a little clean up. Take that, spawn of Satan!

In the meantime we went to Lowes after Lowes after Lowes until we finally found a water heater expansion tank. Apparently it’s what you need when you have a back flow valve (thanks City of Austin plumbing code for not mentioning it). I guess those are the lessons you don’t have to learn when you hire a plumber. 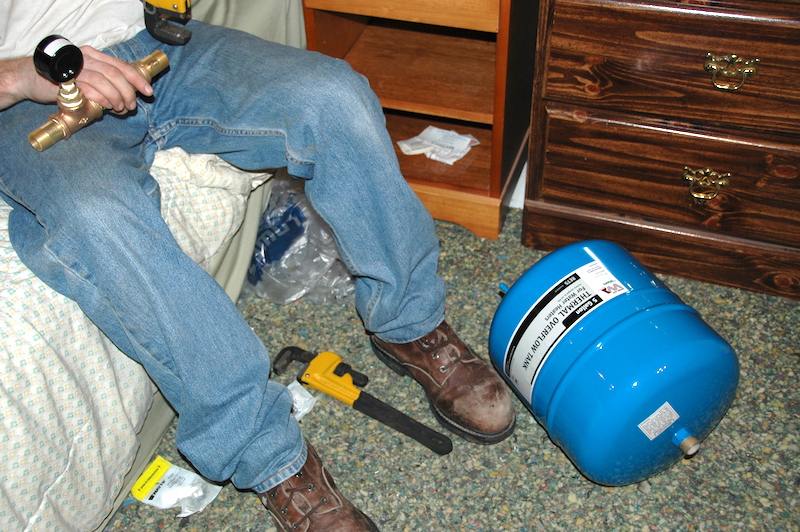 Anyway, while shopping for brass fittings we got a pressure gauge thingy, too, and it’s a good thing we did, because it was the only clue we had to a shiny new problem. Yes, ANOTHER problem.

Day 2, Errek went out to Home Depot and then Lowes to hunt down a pressure reducing valve. We installed one with an adjustable PSI, but we left it at the default of 50PSI.

Sigh. My god, I’m tired just writing about all of that.

Anyway, long story short, by the end of the weekend we once again had a working shower. And it’s awesome…I mean really, really awesome. Sometimes I just go in there and sit. 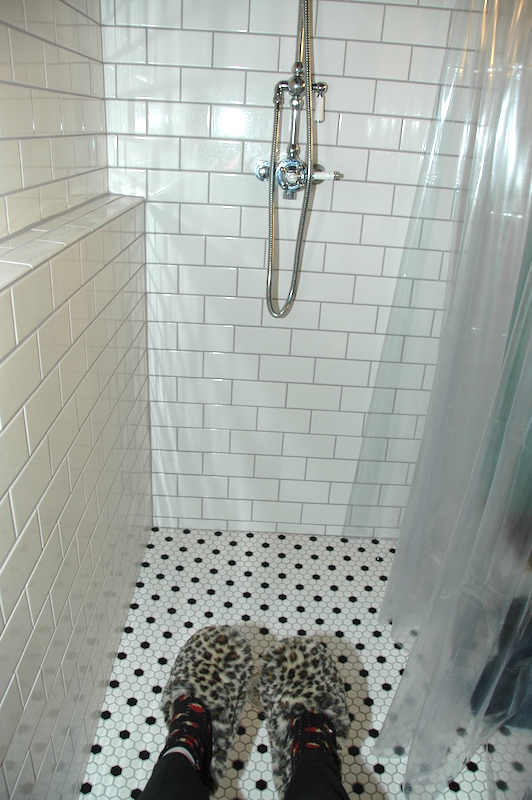 The other day we even went up into the attic and pulled all the electrical wires out of the ceiling, so it’s quite lovely, and much safer now. 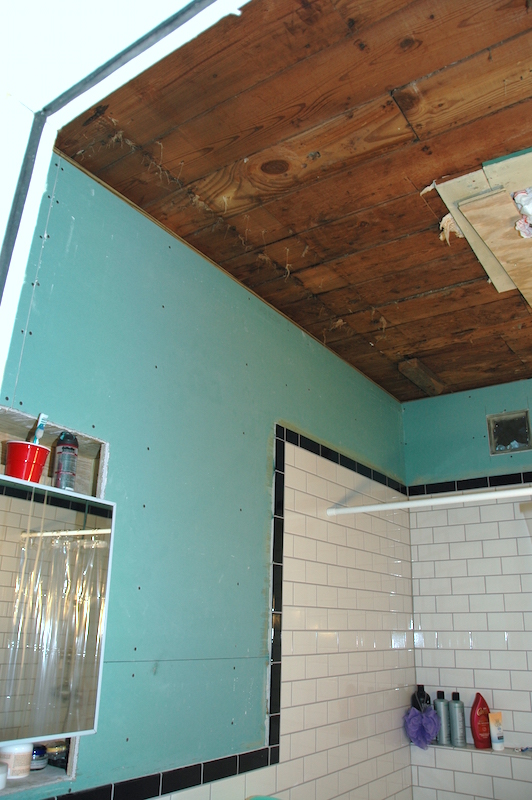 Now all that remains is to drywall the ceiling, move the AC vent, install an exhaust fan, install lighting, wire the lighting and outlets, make the medicine cabinet and the larger closet cabinet, spackle the walls and paint, finish out the door, finish out the glass block, tile the remaining half wall… Oh jeez, when will it end?