Chapter 14: Let There be Light

So, I assume by reading this blog you are saying, “Yes, please give me the gory details.” Well, you asked for it.

Gory detail: When most of your house is missing portions of walls, and you eat lots of cheese, you’re going to get a rat. Yep, we had a rat.

It all started one night when Errek had gone to bed and I was up late working in Lucy’s room. I heard the tell-tale chewing and started to freak, waking Errek with a loud, “shh, listen, we have vermin.” The rat grew increasingly more bold, venturing further and further into our living space. One night, after a night at the Jackalope where the rats run wild but stay out of your way, we returned and turned on the light to see the little bugger scurry across the floor and into a cavity in the wall.

That was the last straw. We bought a trap the next day. We went old school with one of those snap traps. We’d heard peanut butter was the best bait and loaded it up. The next day we checked the trap and found that somehow the critter had licked all the peanut butter off without snapping the trap. We were clearly dealing with some sort of genius rat here, we would have to pull out all the stops, so we reloaded the trap with a sliver of cheese.

The next night as Errek drifted to sleep and I worked on genealogy research we were both startled by the loud “SNAP!” My heart raced as I bolted into the other room to find Errek sitting up in bed staring at the corner where we’d laid the trap. I suddenly wondered, how hard does it snap? Would there be gore. I didn’t want to see gore. Turns out it’s not gory at all, just really really sad. Also, turns out, he wasn’t a rat he was a mouse. He was so cute, I immediately felt guilty for snapping the life out of him. We’d killed Jerry! But in our defense, he was really annoying.

Anyway, for you carnage freaks, I have a picture of our dead ex-roomy, which I’ve linked to here because I didn’t want to upset you more sensitive viewers.

Well, now that that’s done, let’s get on with the building. Where were we? Ah yes, the bathroom. When last we left you, we’d finished the tiling and had a working shower. But the ceiling was still in poor shape and there were no lights or electricity. So, let’s get with it, shall we?

Before we could move forward with the lighting we had to close up the ceiling. The ceiling over the bathroom was a huge mess with three gaping holes in it. 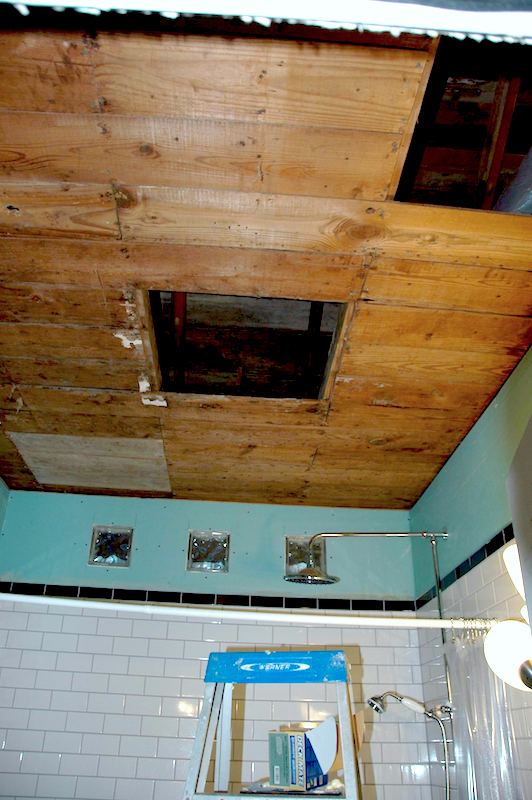 The holes were quite handy for taking wacky overhead photos such as this strange and awesome shot that Errek took of our friend Sindee Lux of the Satan’s Cheerleaders. 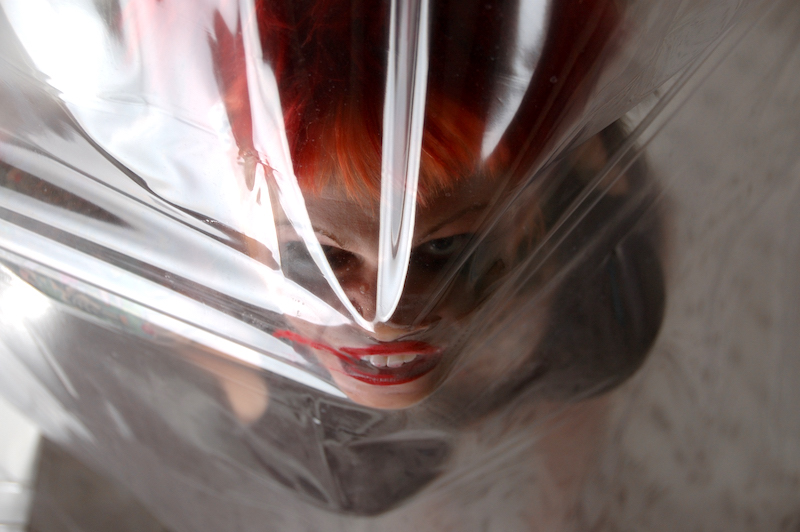 But at the end of the day we decided to sacrifice our awesome photo studio space for a functioning bathroom. 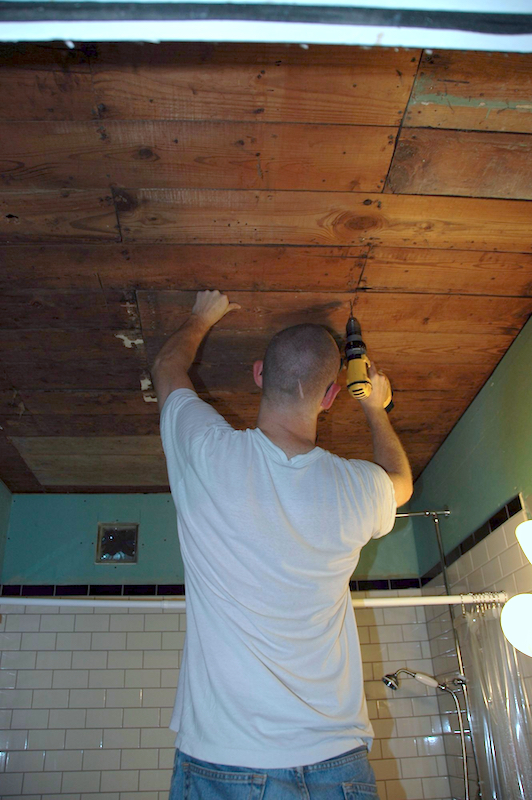 With the ceiling fixed up we got to the lighting part of the job. For the overhead lights we wanted something other than the usual dome light you see in most bathrooms. So we went with small recessed lights, which are awesome, and we got seven of them — three for the shower and four for the rest of the room. It might seem like a lot for such a little room, but we put them on a dimmer so we could completely control how much light we’ve got — super dim for those hangover mornings and super bright for scrubbing the toilet.

Before we drilled holes in our now perfect wood ceiling we wanted to test the location of the lights and get them in ideal spots. So Errek set to work temporarily attaching them to the wood ceiling. In real life you’re not supposed to daisy chain them like that, but this was just a test run. 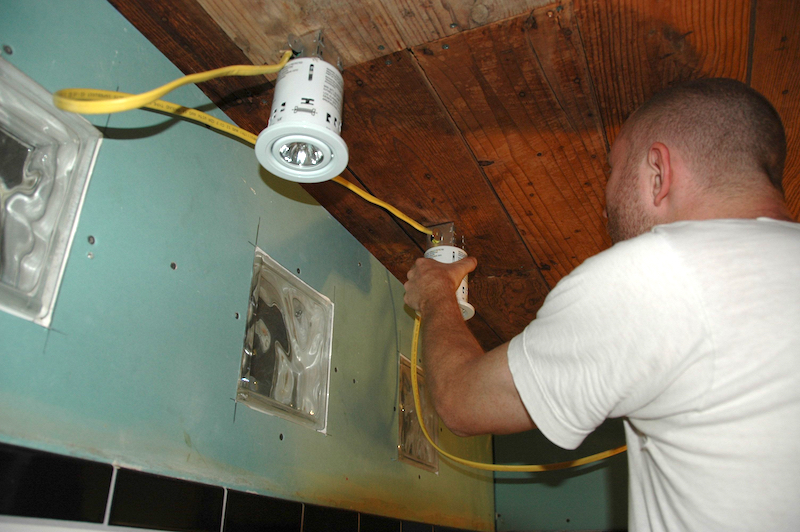 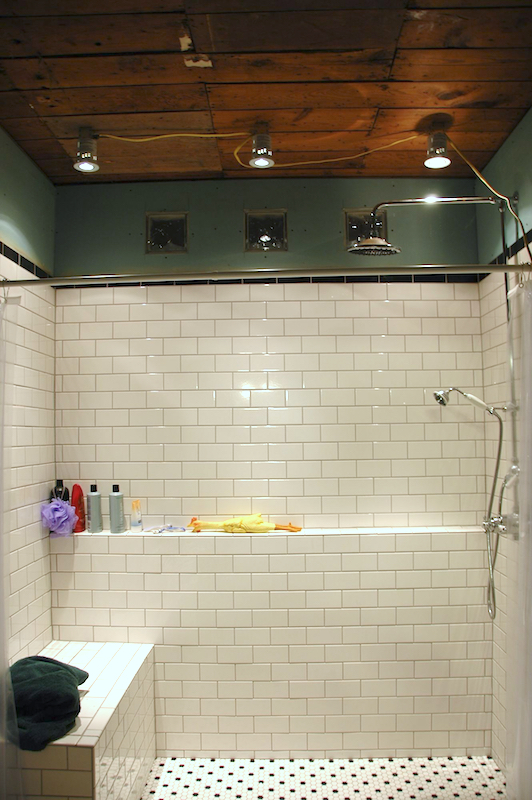 We lived with them like this for a few days before settling on the right spots, then we started drillin’. 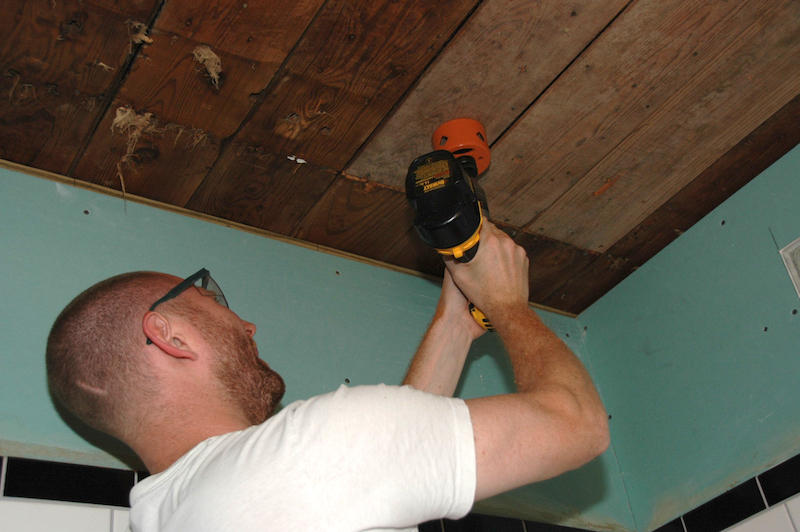 Once the holes were drilled in the wood it was time to hang the drywall. The plan was to then cut the holes in the drywall from the attic side of things. Please note: it’s always wise to hang the drywall on the ceiling first and move your way down. But because it was more important for us to have a tiled and working shower we had to start with the walls first. We left a 5/8″ gap at the top of the walls so that we could later slide the ceiling in on top, which we did, but it was really really…really hard. So we don’t recommend doing it back-assward like we did. 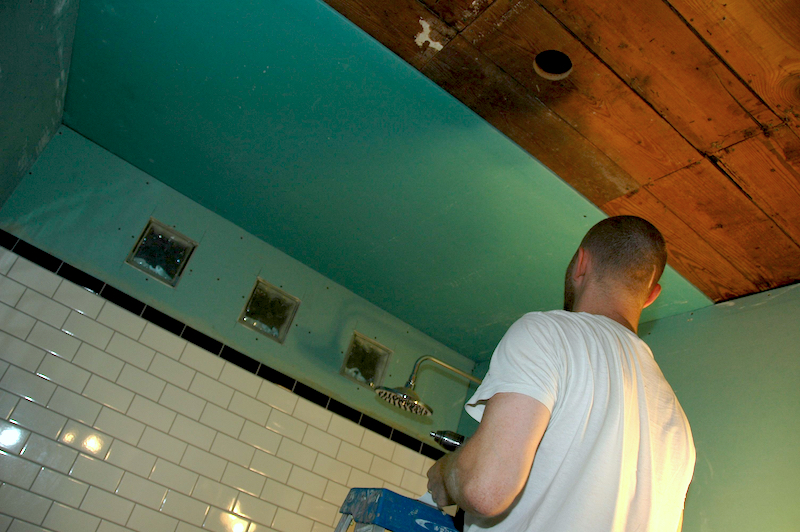 With the drywall up, Errek took to the attic where he cut all the holes in the drywall. By the way, those big squares are for the exhaust fan (it’s super quiet) and the AC vent. 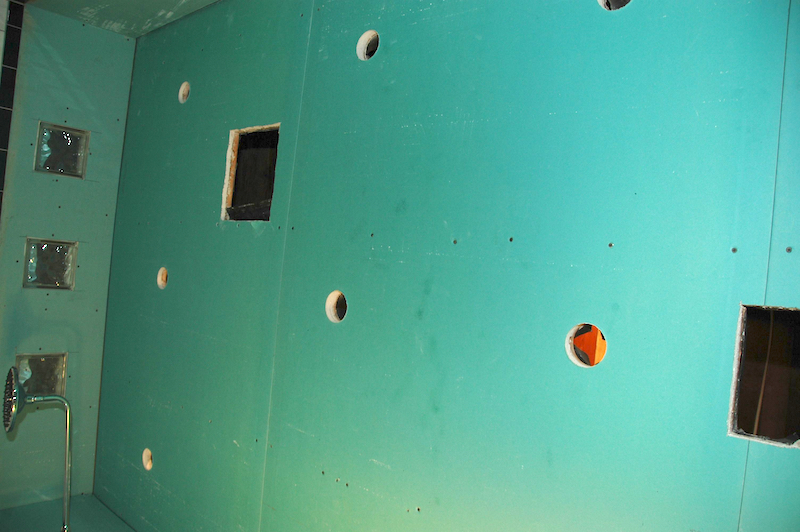 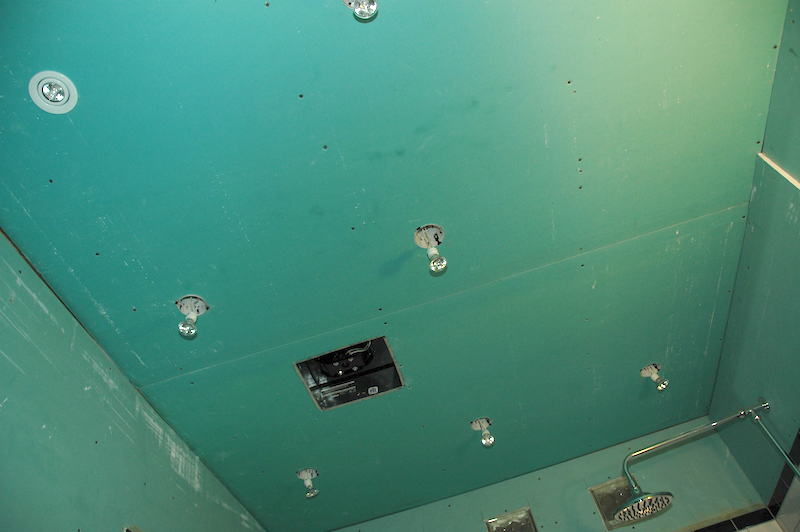 And wired all the lights to a central box with one switch leg (as I said before, these lights can’t be daisy chained for some reason). By the way, it won’t be long and this wiring stuff will be Errek’s trade, he’s going to become an apprentice electrician! 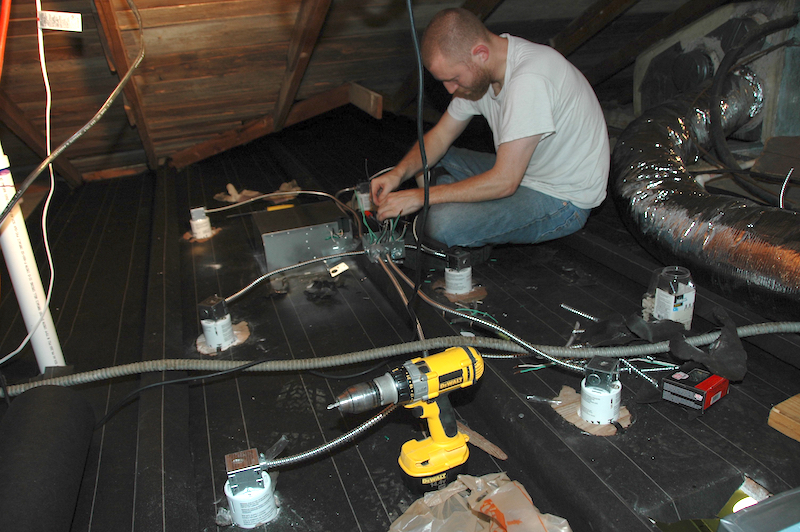 Once the ceiling was done it came time to wire the wall. Here we wanted the wall sconces mounted beside the medicine cabinet rather than over it to avoid weird shadows on the face and whatnot. Also, note the outlet Errek wired inside the future medicine cabinet. Cool, huh? We’ll be able to charge our electric toothbrush inside the cabinet. 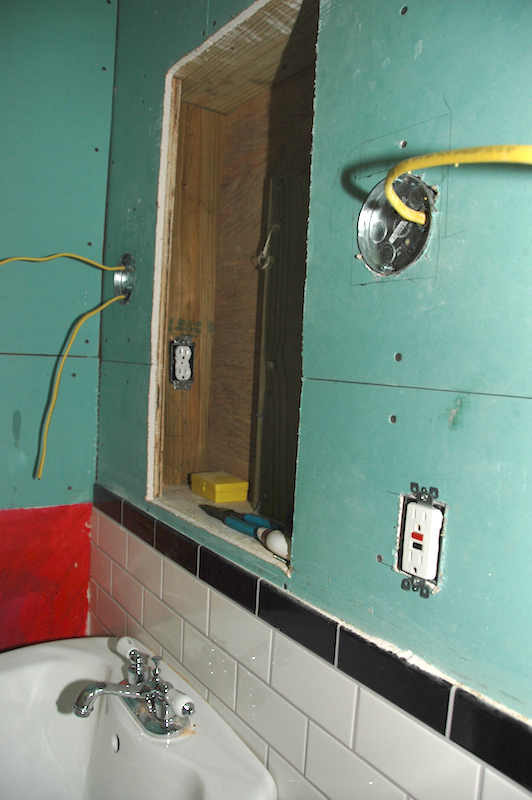 Now, as far as the light shopping, we really lucked out with this. While perusing the lighting aisles at Home Depot we were pretty underwhelmed with the awesomeness-level of their lighting selection. If you like ugly stuff, you’ll have a field day, but for us we only saw one light that we both went “cool” at. And (drum roll) it was on clearance, marked down from $70 to $40 each. But when we looked for the lights on the shelves they were all sold out. Oh well, wasn’t meant to be. The next day we happened to be in a different Home Depot, and just for shits and giggles we wandered over to the lighting aisle to see if they had the same lights on clearance. They did, only this time they were marked down from $70 to $15 each! Hells Yeah! So we purchased $140 worth of medicine cabinet lighting for $30. That was a happy day. And here’s what the lighting looks like: 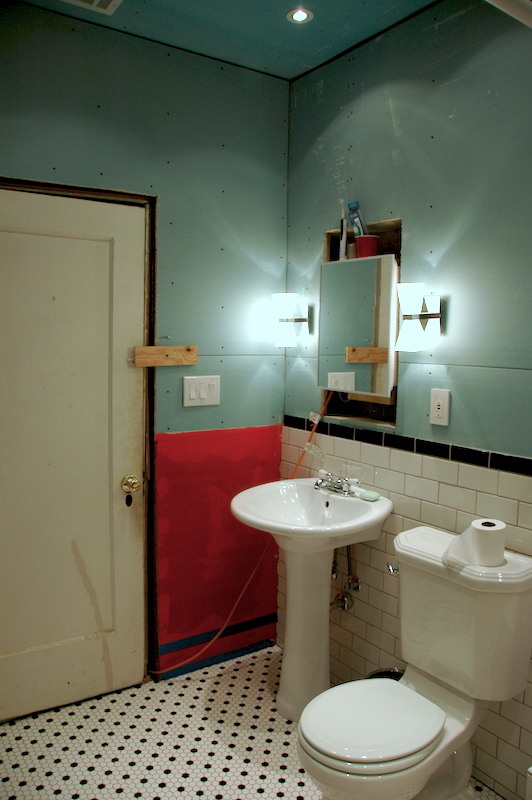 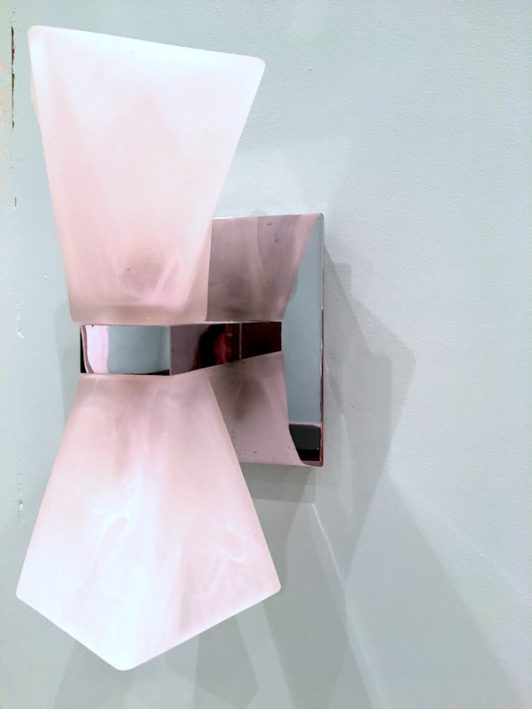 Here’s a view with the ceiling lights visible. Cool, huh? I’m a firm believer that lighting makes or breaks a room and I think we scored a homerun with this room. Plus the over head lights make the black floor tiles twinkle. 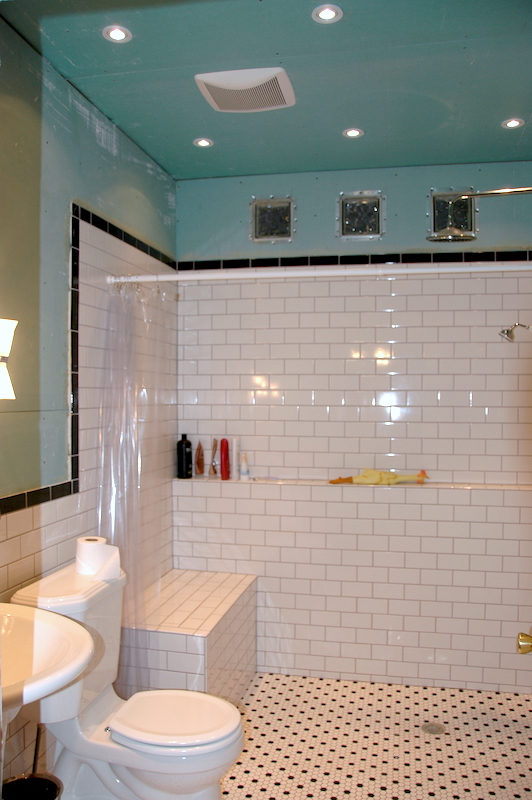 So that brings us to now. We’re on pause with the bathroom, waiting to win the lottery or something so we can finish it out. Here’s what we’ve ultimately got planned for the room:

View 1 – The shower: Well aside from the obvious (spackle, sand, paint the drywall) we will also be finishing out the three glass block windows which will be lit from the backside with dim night lights that will compliment whatever paint color we select (still debating color). Additionally, we will replace the shower curtain and rod with a custom built frameless glass wall and door. 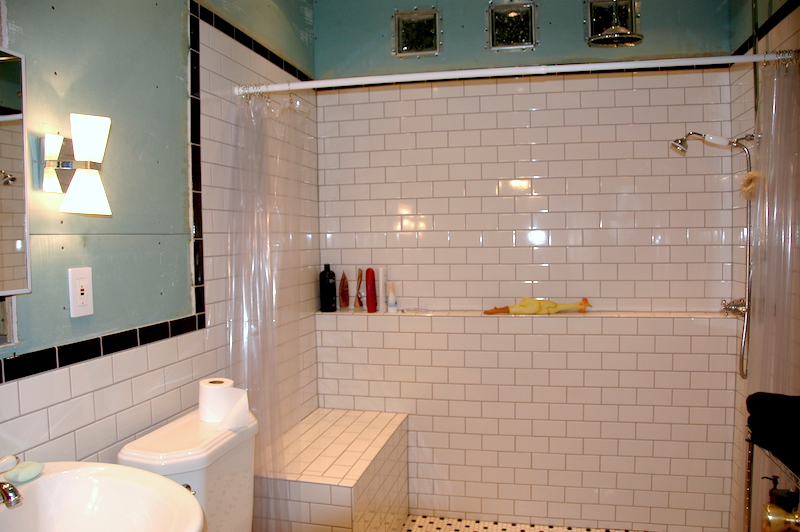 View 2 – The rest of the bathroom: Here’s where most of our future bathroom effort and money will go. When we finally buy, or otherwise obtain access to a table saw and planer, Errek plans to custom build a medicine cabinet to replace the cheap plastic piece of crap we have in there now. We’ve got the hole there and even have the outlet wired and working, but just need to make the mirrored door and interior and shelves and such. Additionally, we’ve planned out a large custom cabinet to match the medicine cabinet which will fill the wall where our Target “Metro” shelves sit now. It too will include a built in outlet as well as night lights behind glass block to match the back wall of the shower. Lastly we’ll replace the door with a pocket door (a door that sits inside the wall cavity when not closed) to conserve space. Once we have the pocket door in place with it’s trim and whatnot then we’ll be able to finish the tile work. Finally we’ll be adding a towel rack in the shower over the bench, a hand towel rack below the light switches, and a toilet paper roller into the side of the shower bench. 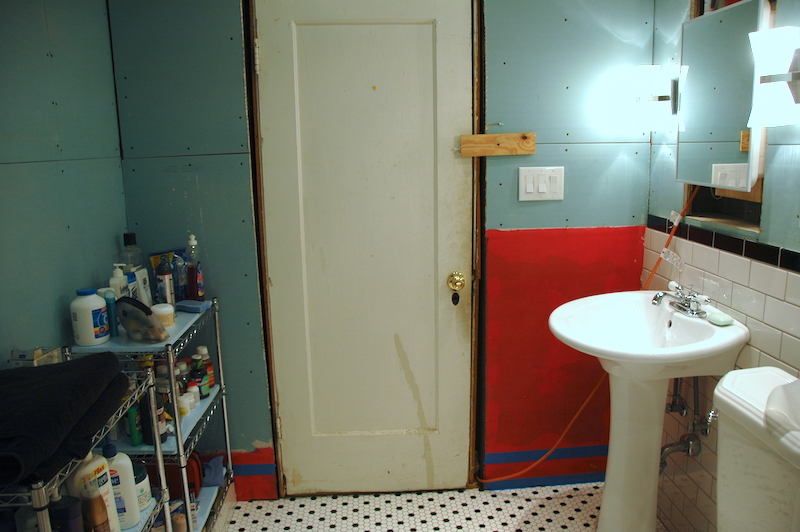