Chapter 15: Coming Out of the Closet

After we had the bathroom in a good place it was time to work on other rooms. “Hmm,” we pondered all leisure-like, “How about we finish out the closet and bedroom?” With a nod, there is agreement, “Yeah, that’d be cool. I mean living in a windowless one-room efficiency sized house is growing a bit tiresome.”

Then the phone rang (I mean it didn’t ring right that minute, but indulge me for the sake of comedic timing) and it was Errek’s mum. She was coming for a visit all the way from Delaware. Awesome, I’d finally get to meet her, and Errek was definitely stoked to have her come and stay with us… Hang on, I think I might have I’ve detected a small flaw in our plan… We live in ONE ROOM HOUSE! That is not exactly a situation that is conducive to the comfortable hosting of guests.

Suddenly, the clock started ticking. We had one month to have a comfortable space for Errek’s mom and…well…for us, too. And as I type this it’s T minus 13 hours before she arrives and we’re still putting on a few “finishing touches” such as a bedroom door.

But I’m getting ahead of myself. First, before we could have a bedroom, we had to have a closet. And before we could finish out the closet we had to clean out all the crap. The “bedroom” which we’d started referring to as the “big closet” took the brunt of the crap. 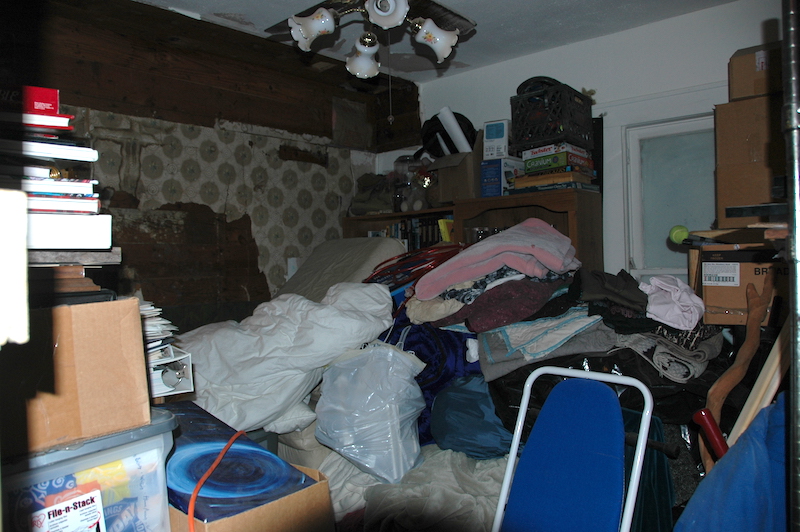 Wow, that’s a lot of crap. But look, the closet is all empty and stuff. Sweet! Note: the plywood on the right is where we boarded up the door to the cat room (due to Errek’s cat allergy/asthma). Eventually the closet will open into both bedrooms because, well, we thought it’d be cool. 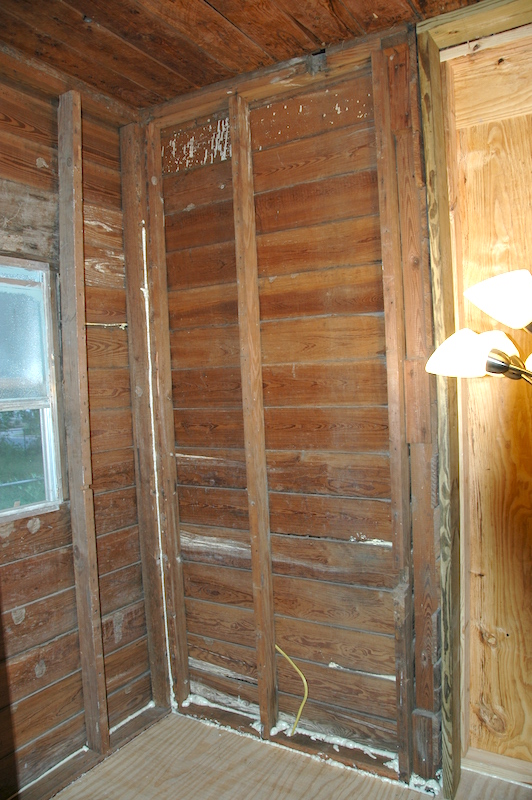 The first thing we did was fix some of the framing in the floor. We put in a plate over the joists to close off the closet from the outside world. Novel idea! Then we used spray foam to seal everything up tight. Personally, I prefer the fewest number of spiders possible in my house, so I sprayed that crap into every nook and cranny. Then we poured out some self-leveler, which is irritatingly expensive, but sort of cool to watch as it creeps along the floor like The Blob, leveling it all out. 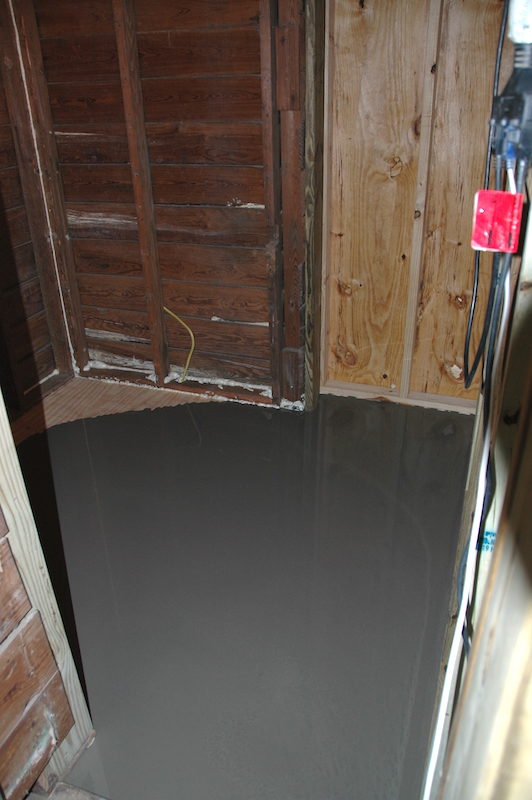 Next we laid the rigid foam board. It’s not much in the way of R-value (R-4) but everything helps. Eventually we plan to have this cool spray in insulation, but it’s pricey so we hobble along for now on a budget. 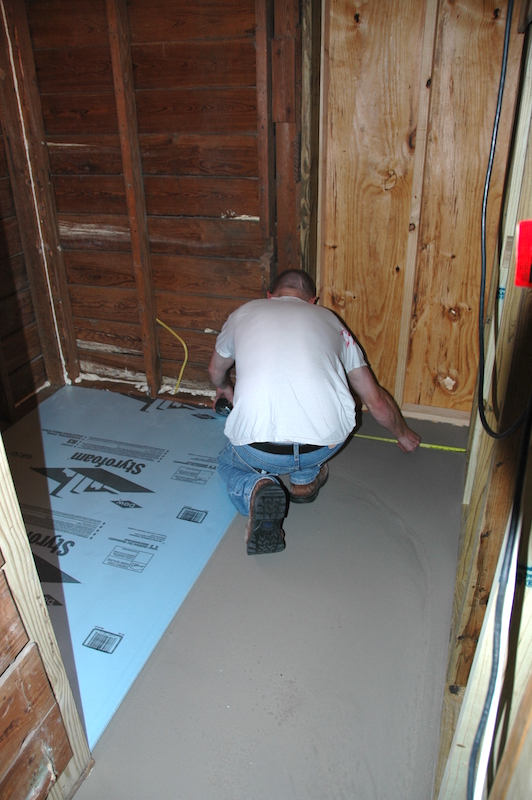 Next we had to install layers of OSB and eventually plywood to complete the subfloor. And in the usual DIY/tight-budget style of Pleasant Valley Ranch, we fashioned a sawing surface out of a pickup bed and two very wobbly old saw horses…in the rain. Yay! 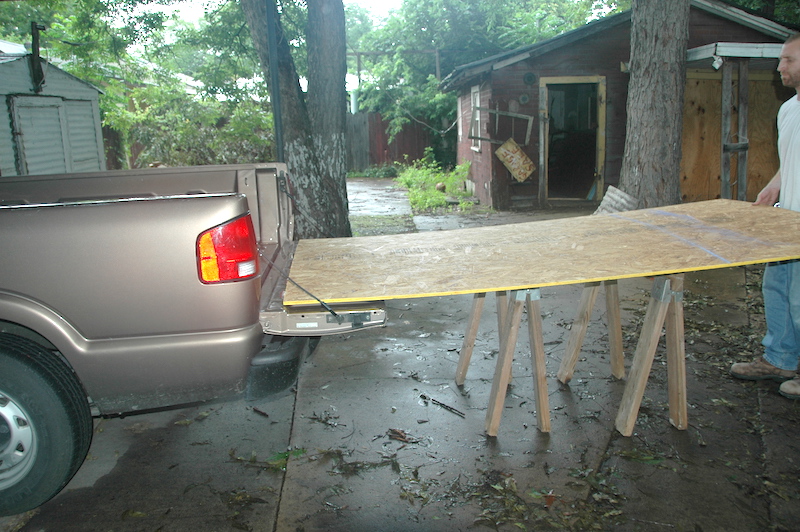 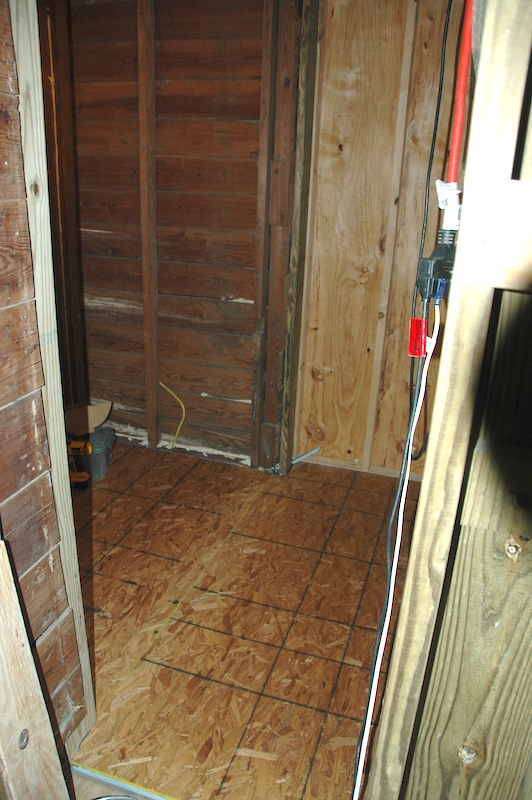 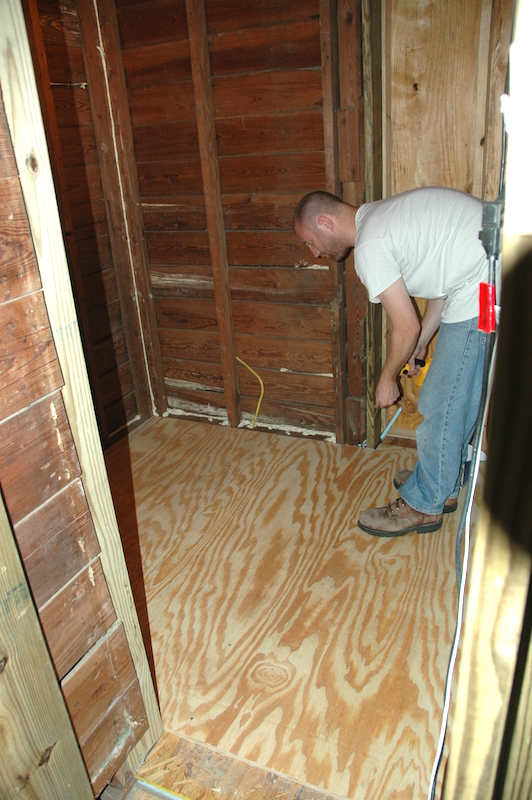 Now came the hard part. Because this closet was on a exterior wall (three exterior walls actually) we had a whole mess of new issues to figure out, such as what’s the best way to insulate the walls, how to finish out the walls without first purchasing the replacement windows, how to make sure the load bearing walls are carrying their weight properly.

First we had to settle on a new window on order to know what size to make the rough opening. We settled on a Pella window that was 2’9″ by 5’11” which was slightly bigger than the current windows. However, the current window in the closet used to be a bathroom window and was sized all wrong, so we framed around it and just covered it with felt paper, insulation, and OSB screwed into place for easy removal later. Why easy removal? Because eventually we’ll insert a window into the hole, but for now the plan was to just board it up. 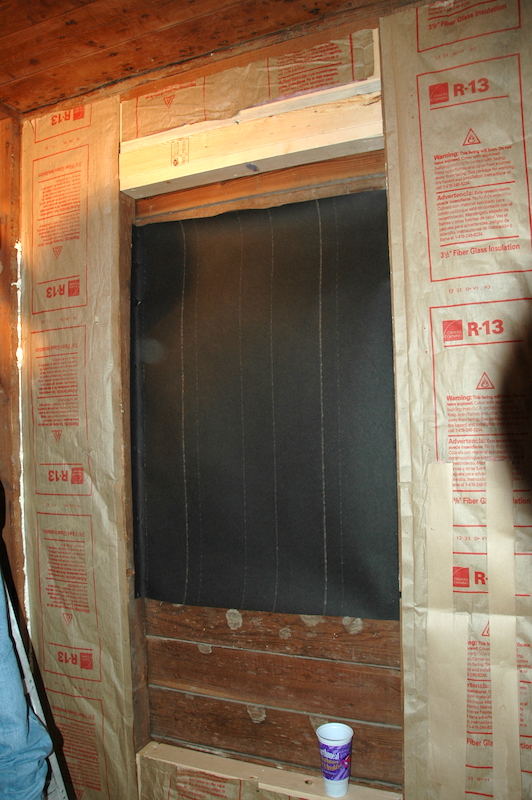 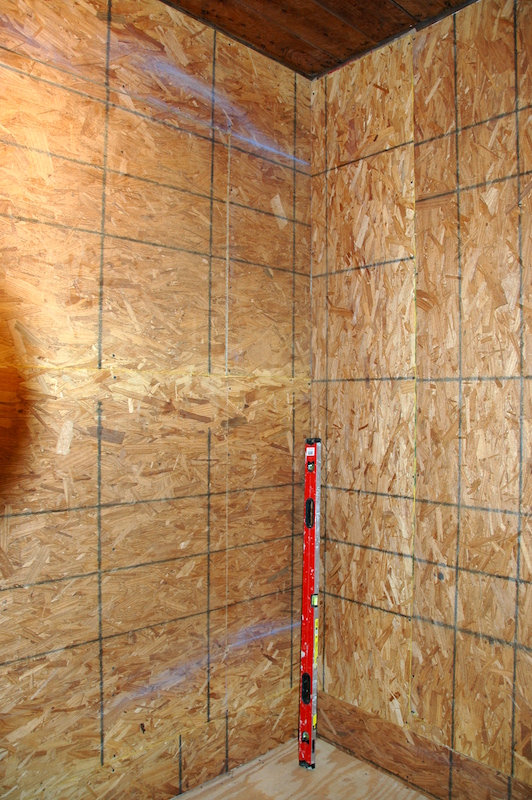 Somewhere in there we put the ceiling up. Not much to write home about. 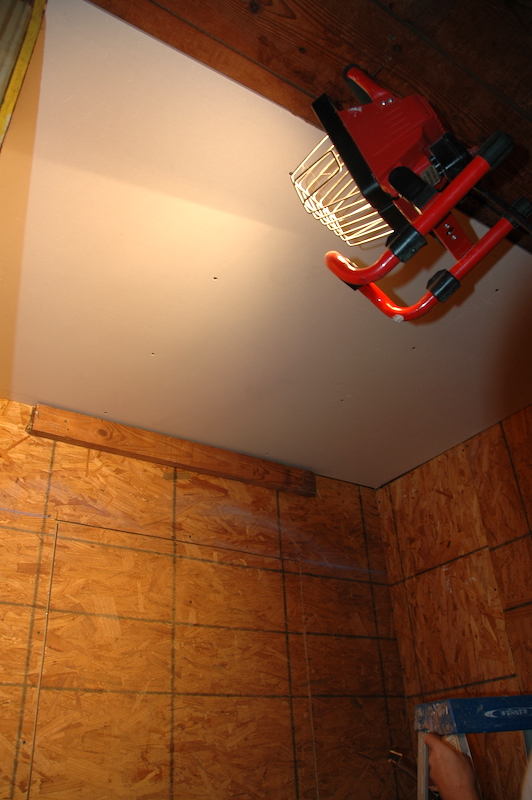 Back to the walls — foam and then drywall. 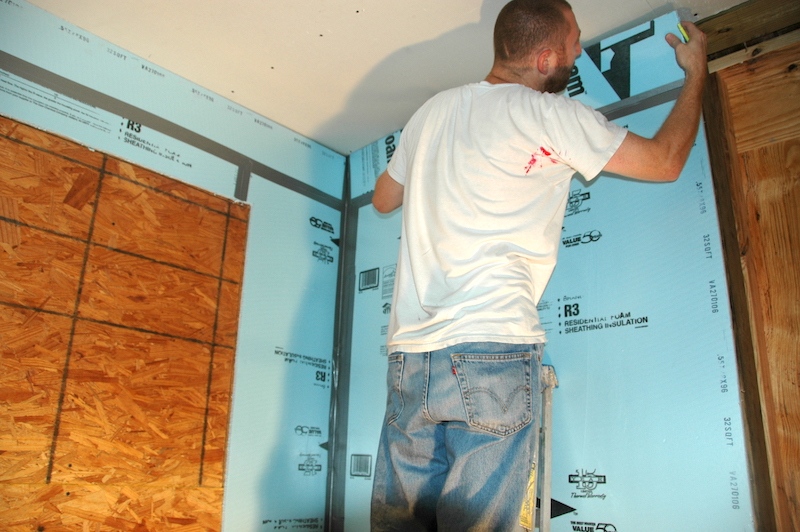 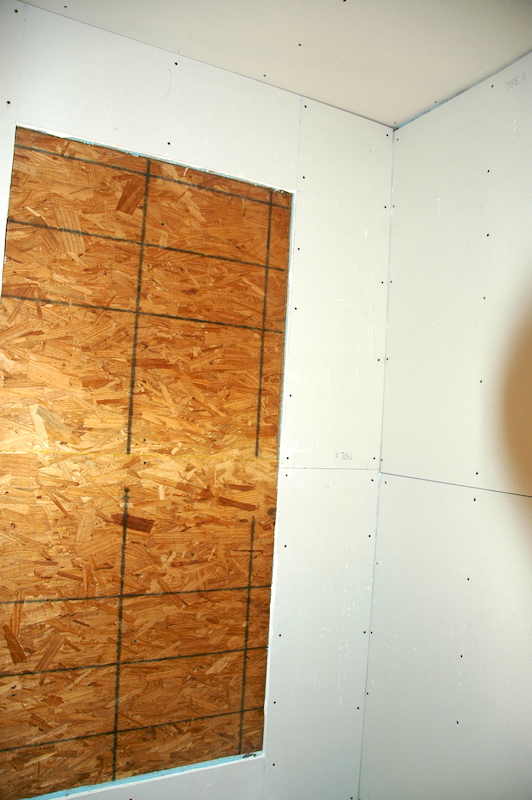 Yawn! Is this as boring to you as it is to me?

Oh! Wait! Some gore! Well, sort of. When it came time to make the closet shelf and rod Errek, as usual, found the heaviest most-industrial strength rod he could find, but it was slightly longer than our space allowed, so he had to cut it with a hacksaw. The metal broke off a bit sooner than he’d expected, and he accidentally almost sawed off his left pinky. It was gross. Gotta say, living with Errek has helped me get over that fainting at the sight of blood thing. Fortunately it wasn’t an emergency room worthy wound, I was able to kiss it (or rather, douse it with hydrogen peroxide) and make it better. It hurt like hell, but he was still able to get the rod and shelf up. What a trooper! 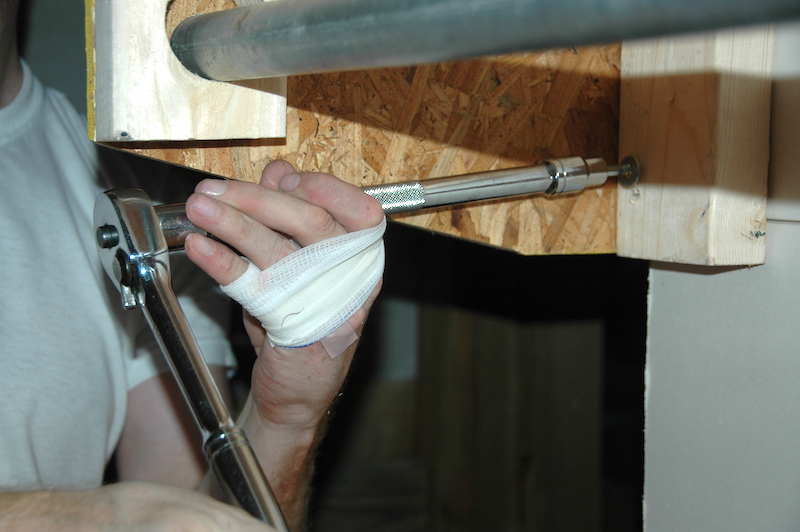 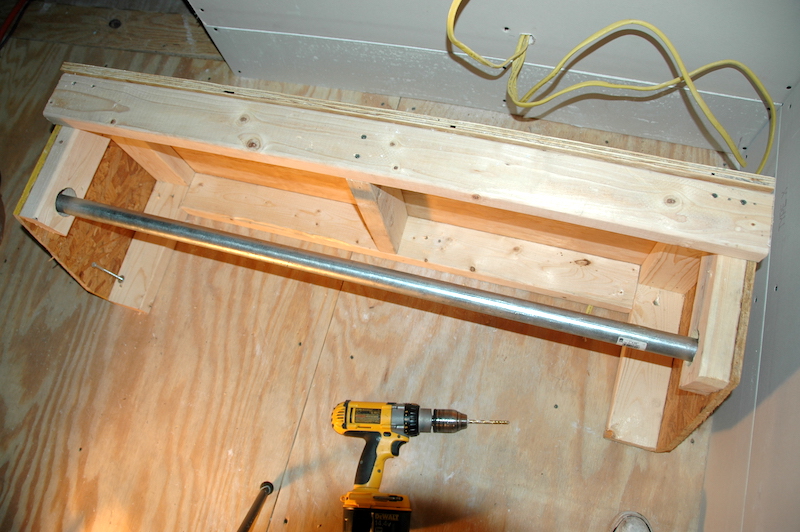 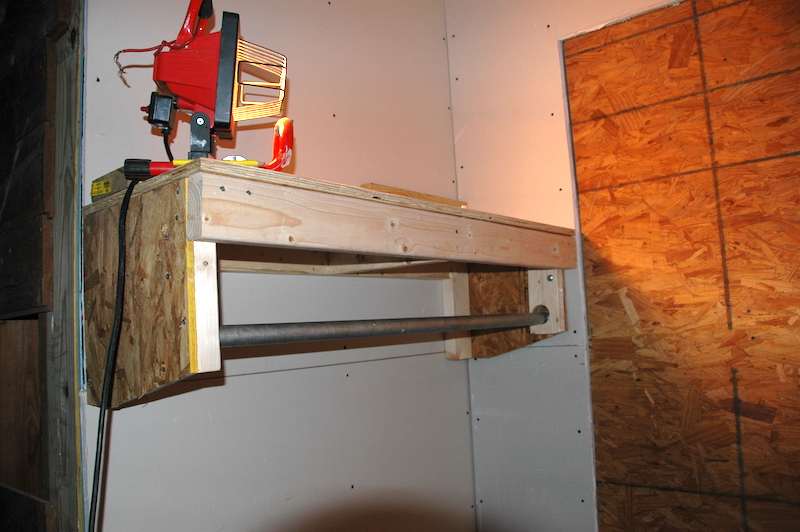 As for the closet rod and shelf, these are just temporary. Eventually when we’ve got the coveted table saw and planer we’ll custom make some really lovely closet gear. But for now we just need a place to put all of our crap, because now it’s time to move onto the bedroom.