Step one, fill the newly finished closet to the gills with everything that you’d previously tossed into the bedroom. 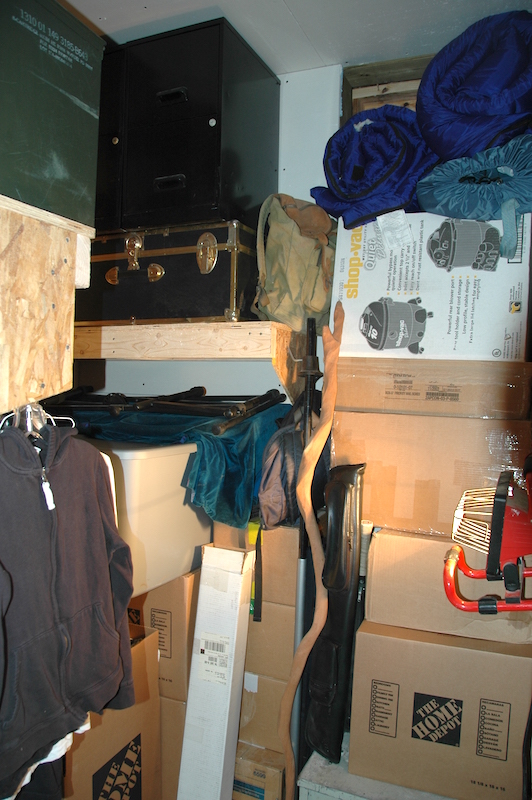 Step two, when the closet can take no more, fill the living room to the gills with overflow and giant pieces of furniture. Stub your toe every few steps just to know you’re alive. 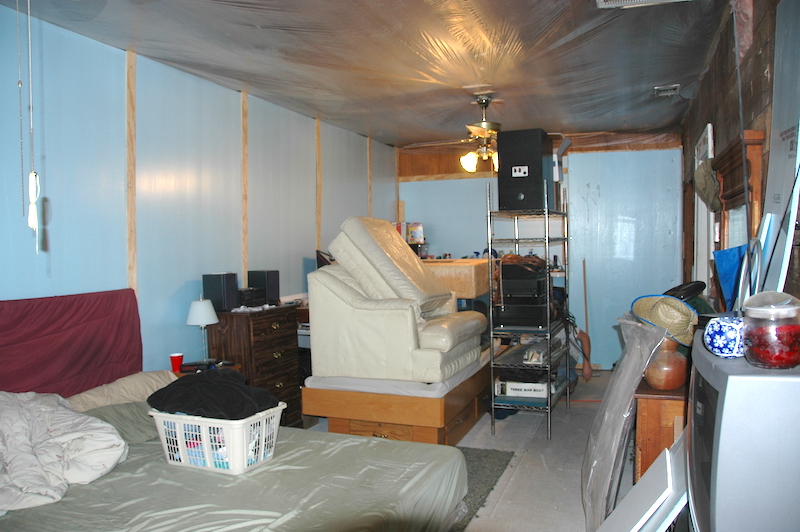 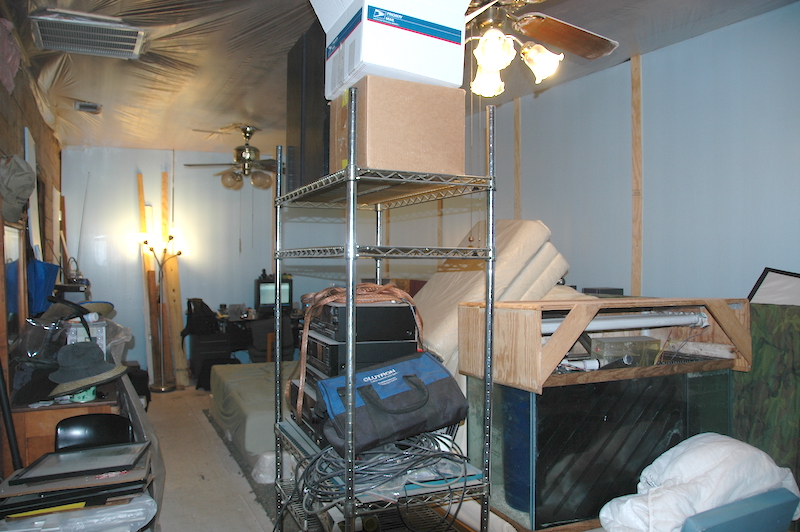 Hahaha! So…wait, you actually want me to live in this room for the next three weeks with it like…that? Oh boy, I’m going to get cranky.

But look, the bedroom is all clean now. 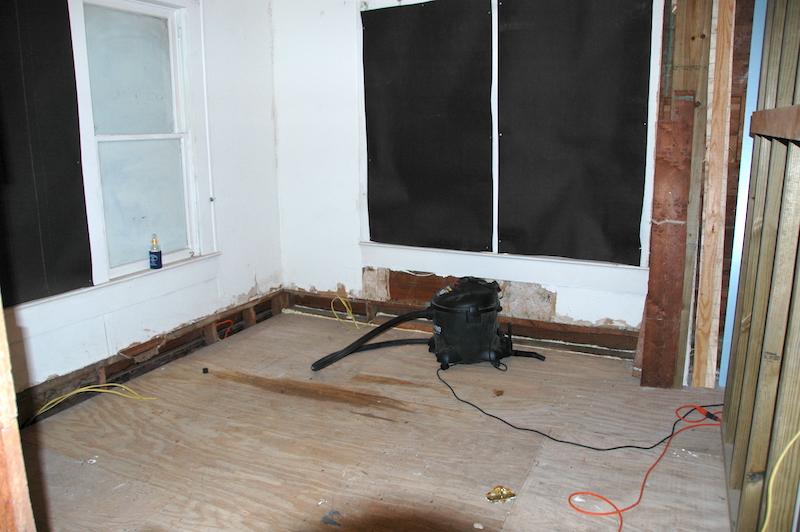 Okay, so step three or whatever, rip all the drywall off the walls. 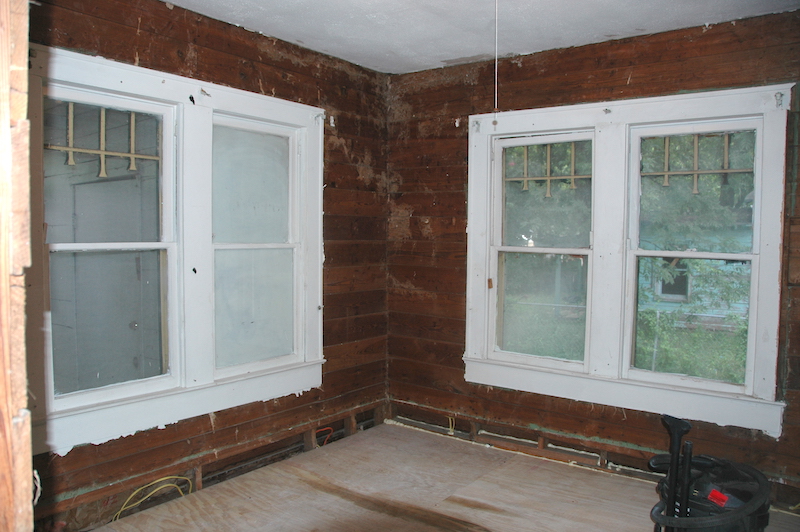 Again we smeared that expensive leveler all over the floor because Errek has this weird thing about a floor being level and flat and stuff. Go figure. 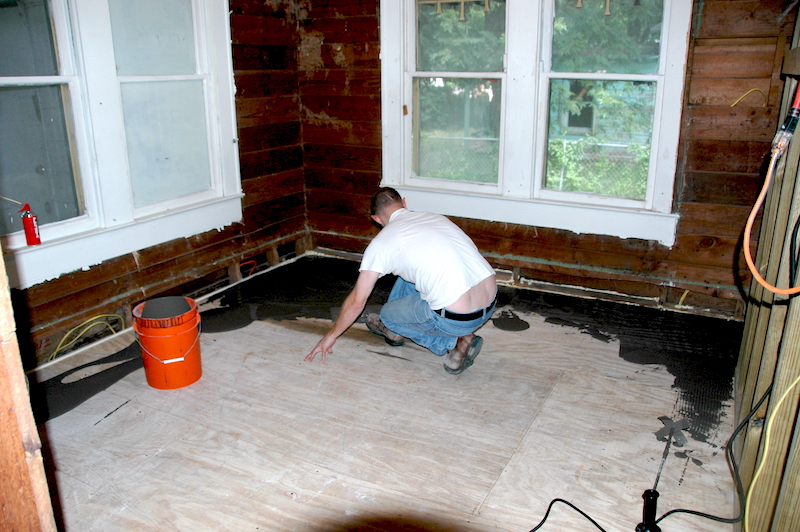 Step four: Wearing your boyfriend’s tie-dyed pot-smoking frog t-shirt, attack the walls with a hammer, a pry-bar, and some gusto. 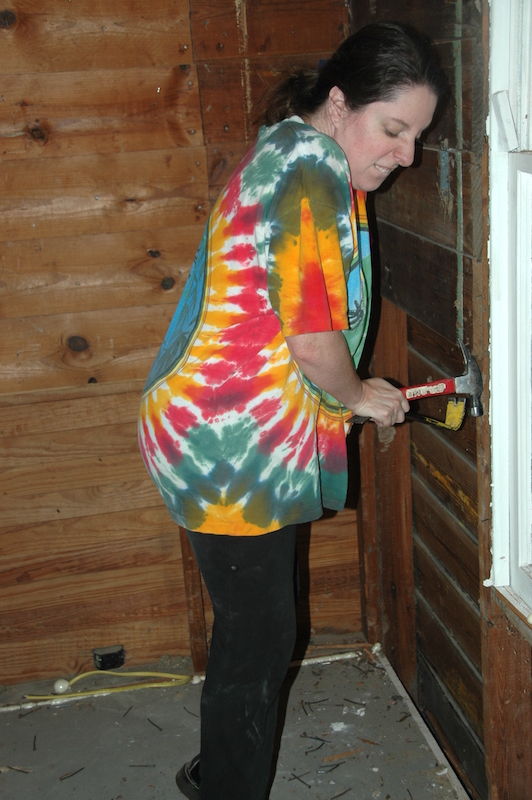 Okay, so here was the plan. Eventually we’re going to build onto the back of the house. We’re going to build a killer kitchen and laundry room in one half and extend the master bedroom and add a master bath in the other half. With that it mind we decided to basically build a temporary(ish) wall along the back of the bedroom. The existing wall was screwed up anyway (it had two windows on it but when Mr Perez added a laundry room onto the back porch one of the windows looked into this space so they just painted over it. So we’re not in love with it. We tore out the windows, attached plywood over the holes and framed in the wall anew.

But first, check out this time-lapse series of Errek trying to carry studs in from the truck. 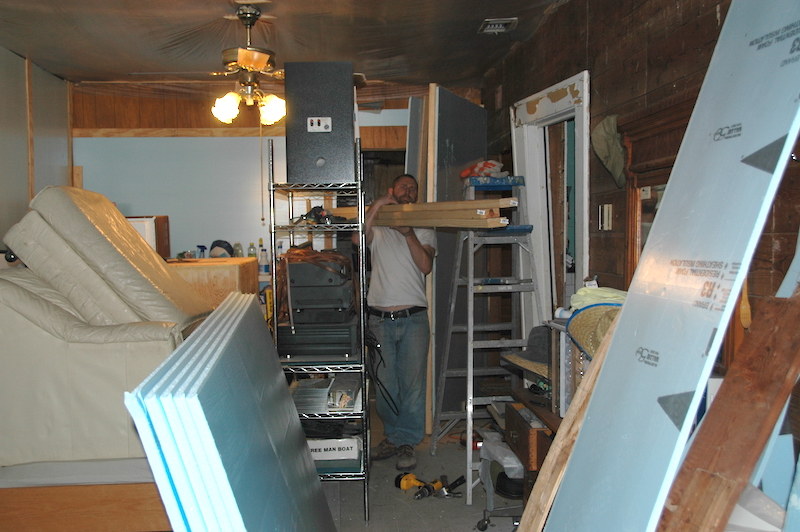 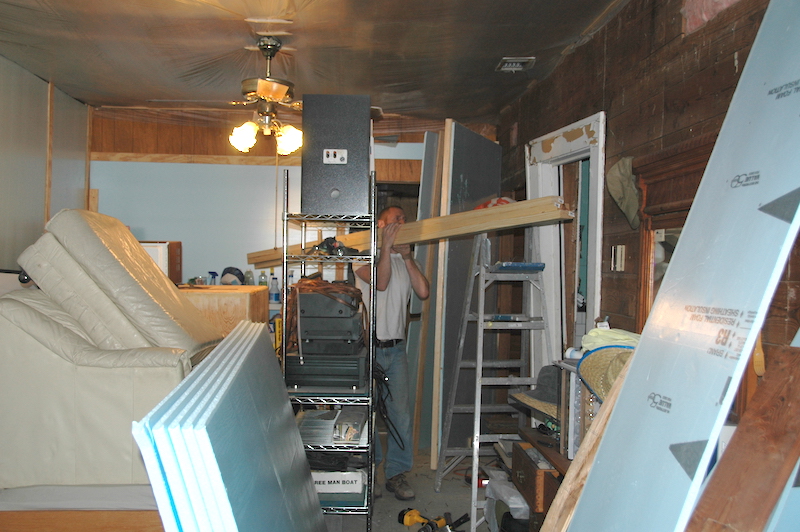 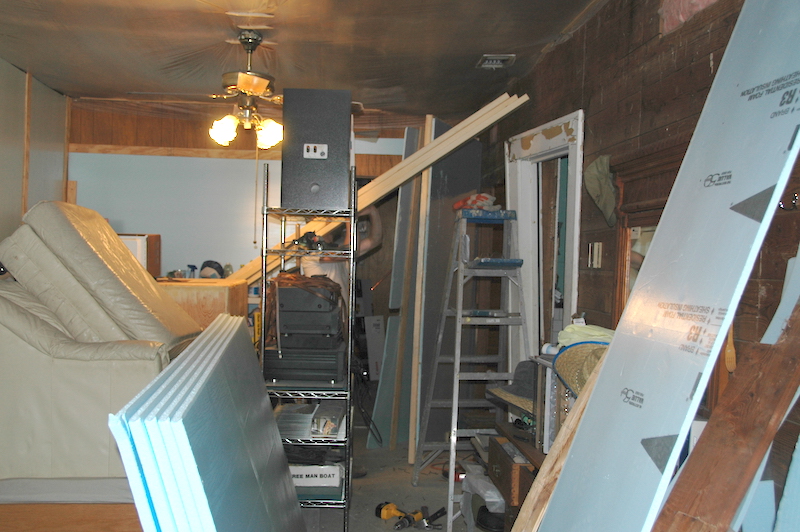 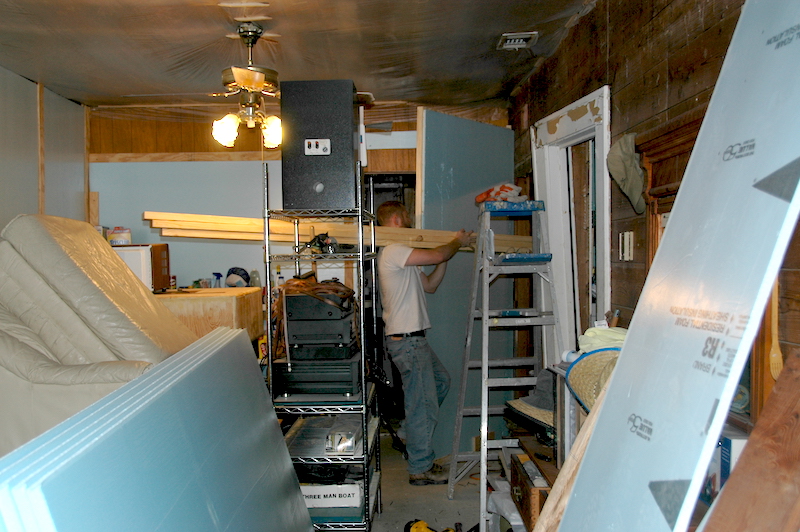 Alrighty then, time to plywood over the holes and frame that sucker in. 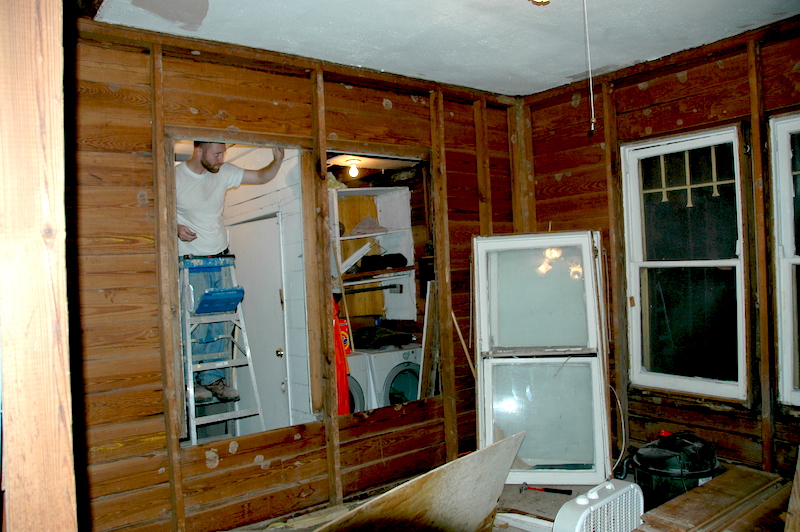 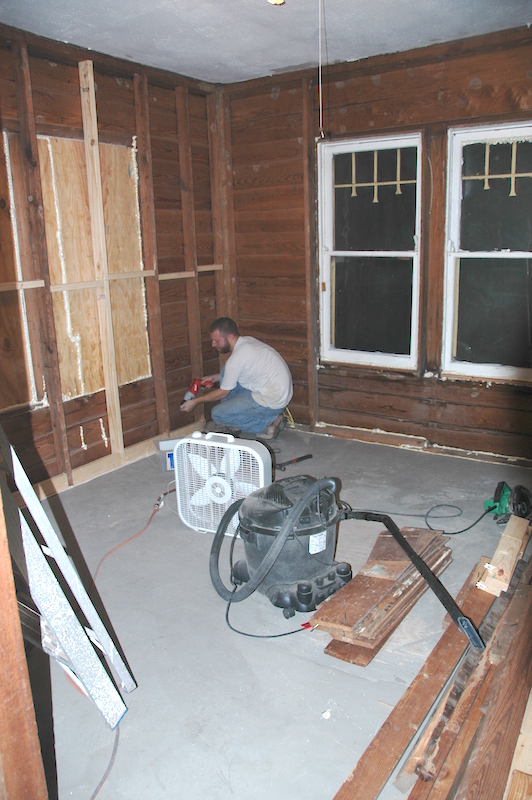 Now, onto the next wall. Oh shit, we have a problem. Shocker!

As we started to look at the windows on this wall we noticed a whole helluva lotta wood rot. One window’s entire sill had rotted away. 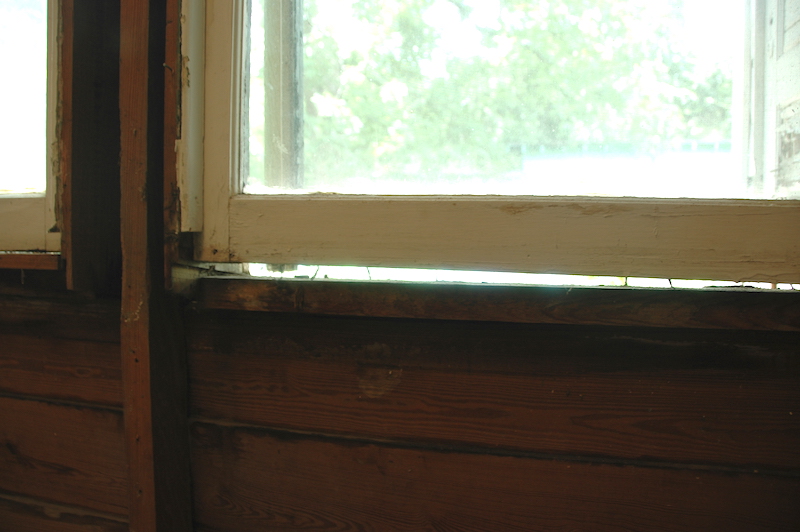 Turns out the window had rotted away because of an unwise construction choice. At some point in the house’s history someone built a weird little water heater closet onto the side of the house. It probably seemed harmless at the time, but what happened was that when it rained all the roof water would rush down the valley between gables and come down directly onto the roof of water heater closet and in turn splash all over the wall. Then the window screen would trap the water over the sill making the wood rot, rot, rot. The neighborhood termites were probably all licking their lips hungrily at that. Do termites even have lips? I dunno, but regardless, they all marched their little asses over for a feast of wet wood. But I digress…AGAIN!

Anyway, we suddenly had to stop everything and find a solution to our wood rot problem.

Errek’s suggestion 1: What if I unroll some metal sheathing down from the eves to cover the side of the house.

Christina suggestion 2: How about we put a gutter up. 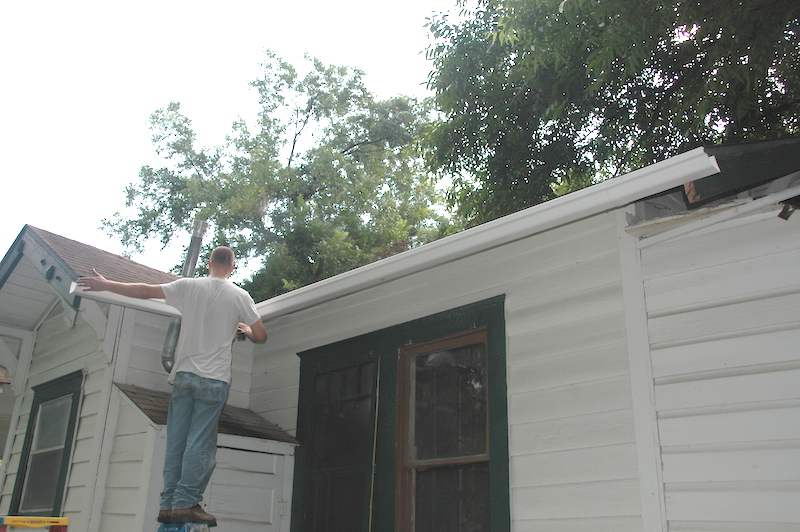 Because of the ridiculous amount of rain we’ve had lately we’ve kept an eye on our little problem solver and so far it seems to be working quite nicely. Yay!

Okay, now where were we? Oh yeah, framing the walls…but, what’s this? Random nails in the way. “Well,” Errek adjusts his belt all manly like, “guess I’ll just have to grind those down.” (read: Yeeha, I get to play with a new toy). 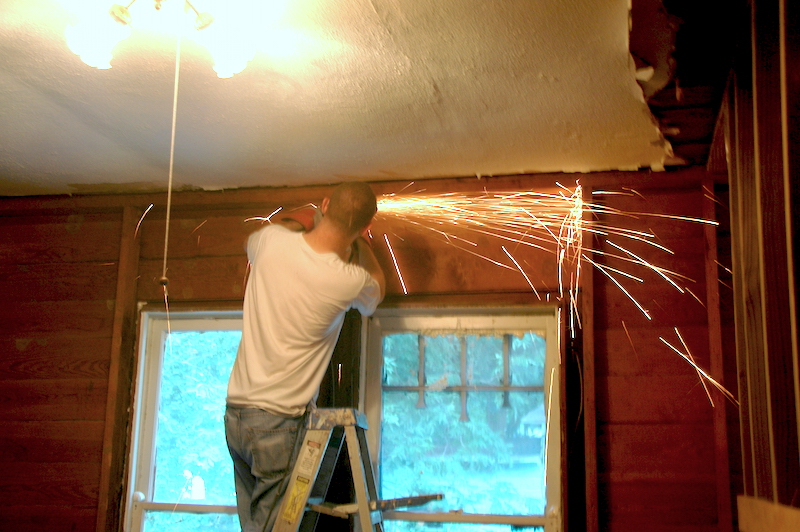 Okay, fast forward, we’ve got most of the framing done and now I’m itchy as hell from the fiberglass insulation. 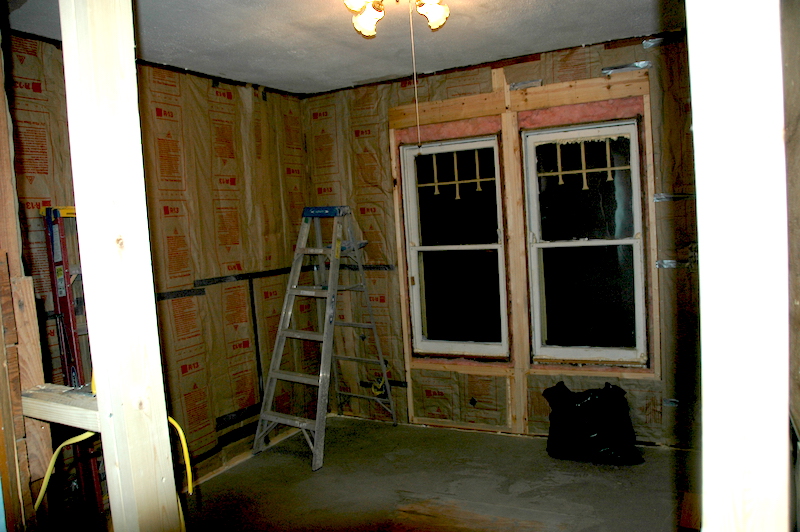 So naturally what we need now is some good old fashioned demolition. 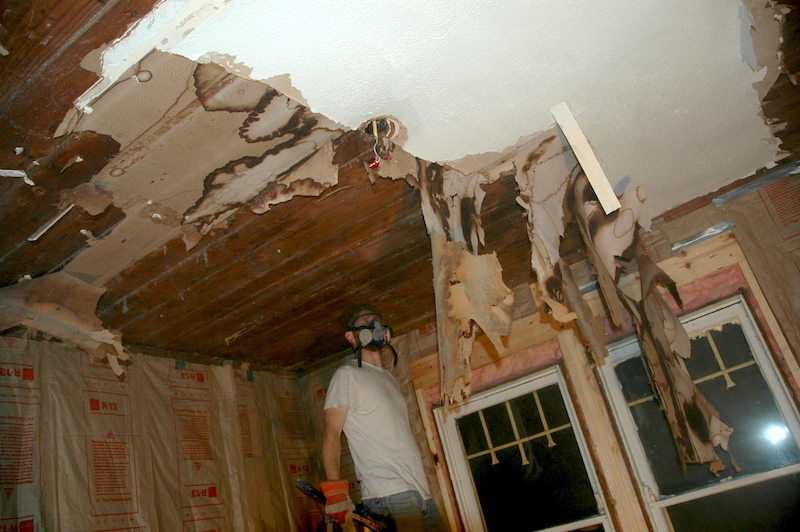 Note: This time we finally bothered to get some badass respirators. Though a respirator doesn’t help much with the ick factor when you pull down a huge chunk of ceiling and get a 60-year-old dust shower. 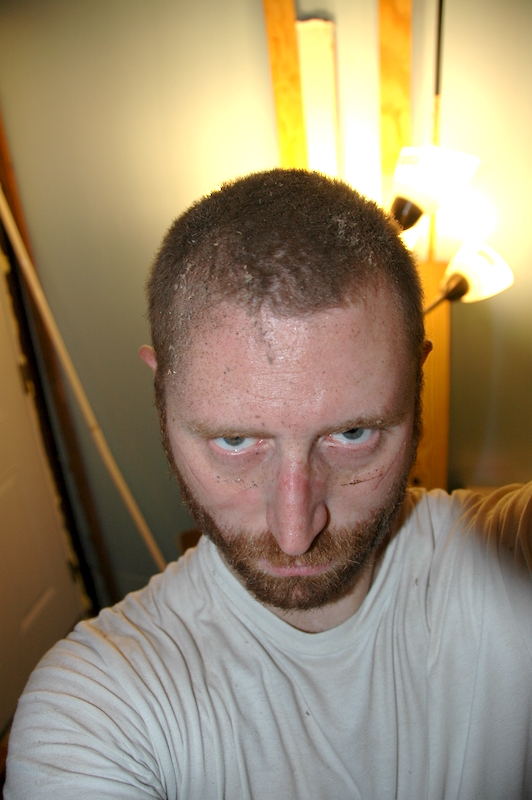 This is his I’m-covered-in-a-lot-of-grime-and-I’m-displeased-about-it face. But whatever, because we’ve got insulation up and suddenly it’s like blue skies everywhere. 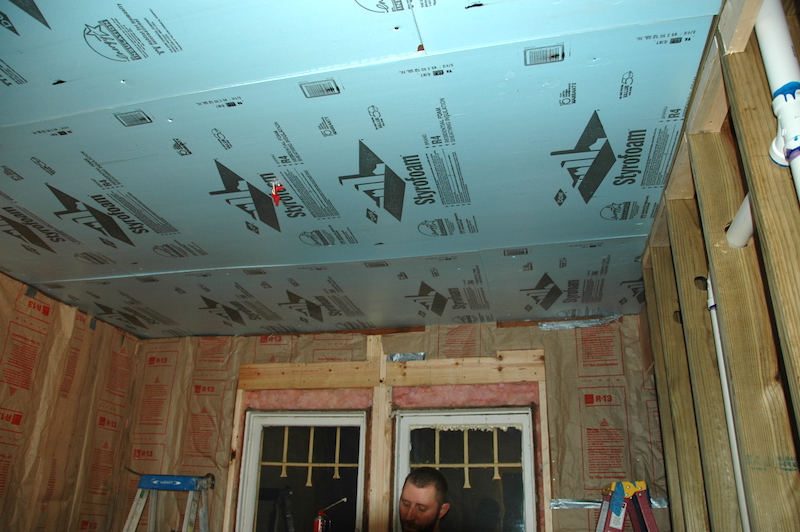 Okay, well, blue skies everywhere except for in the rest of the house where our living condition was becoming a nightmare. The day I couldn’t get to the fridge was a sad, sad day, so I documented it. 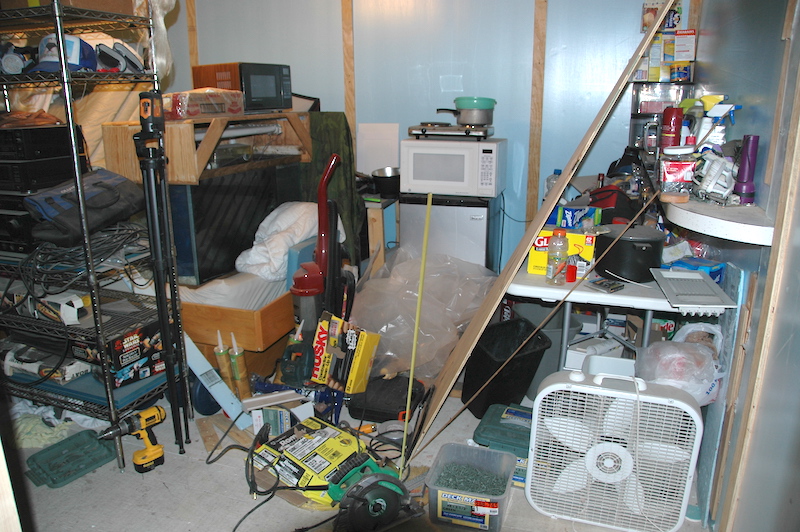 Even Lucy was feeling the pinch, making her bed out of art. Love you, too, Lucy. 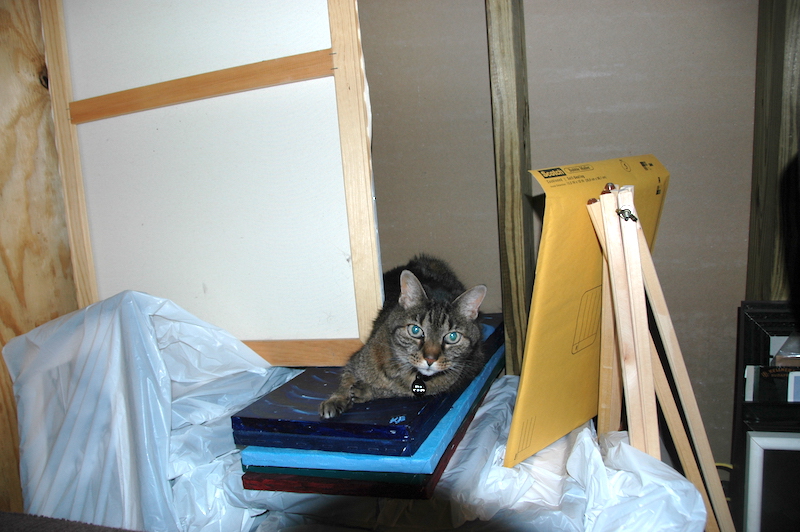 In the meantime, drywall on the ceiling. 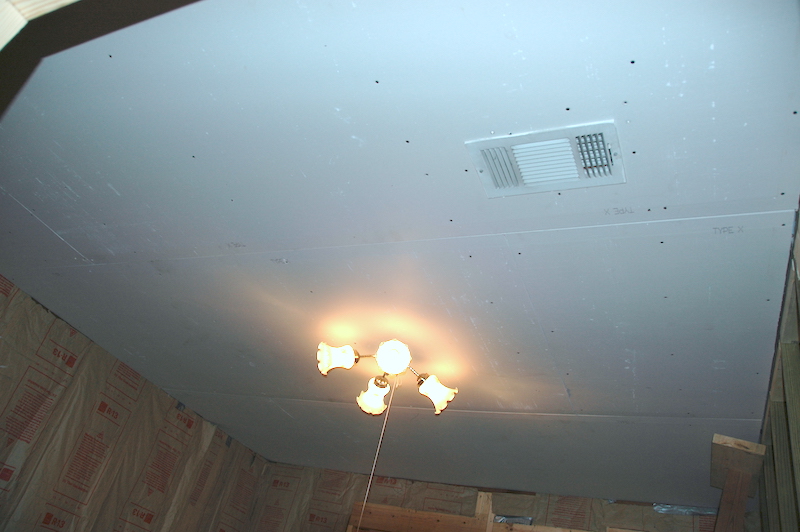 Aw neat, a finished ceiling. The light fixture is temporary. Errek pulled the light kit off the old fan and mounted it as the light. But we’ve got the replacement fan already, just need to mount it and finish out the wiring. It looks like this.

And now what’s this? Floors! Suddenly the floors are done. Heh, well it might be “suddenly” for you, gentle reader, but it wasn’t so sudden for us. Laying three layers of flooring of flooring is never “sudden.” 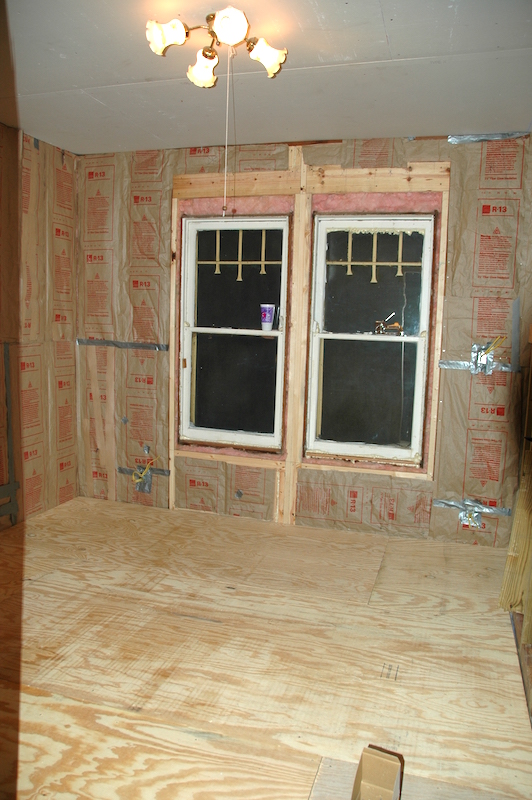 But yay, we’re on to the walls now. Finally we’re picking up the pace. 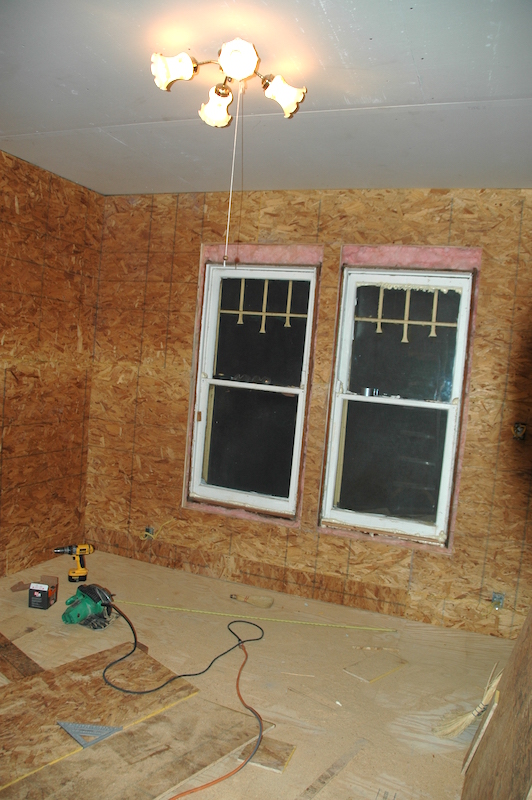 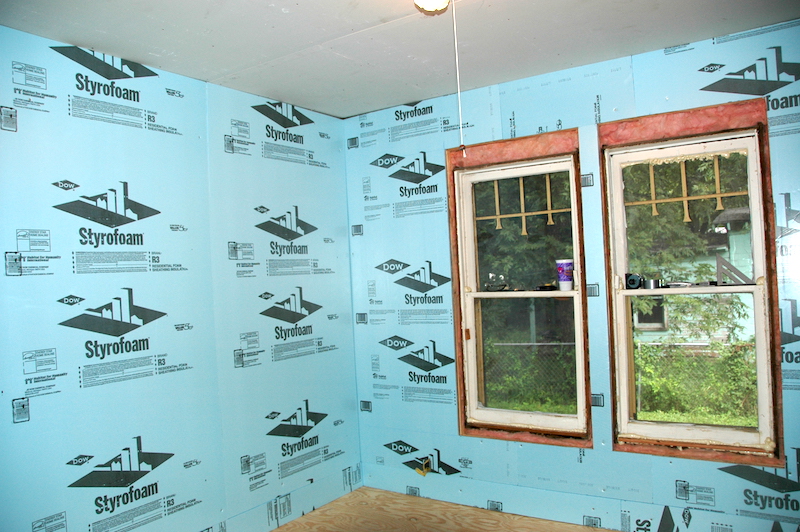 We like to prime our subfloors so that we don’t get splinters. It’s weird, I know. 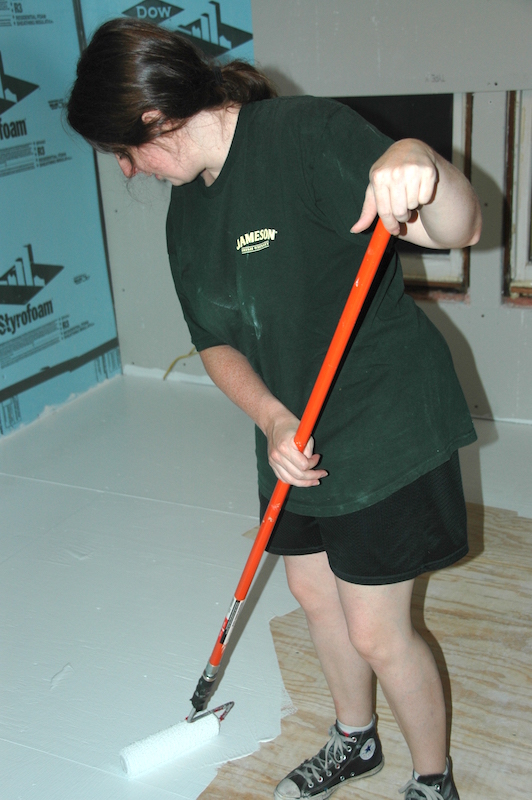 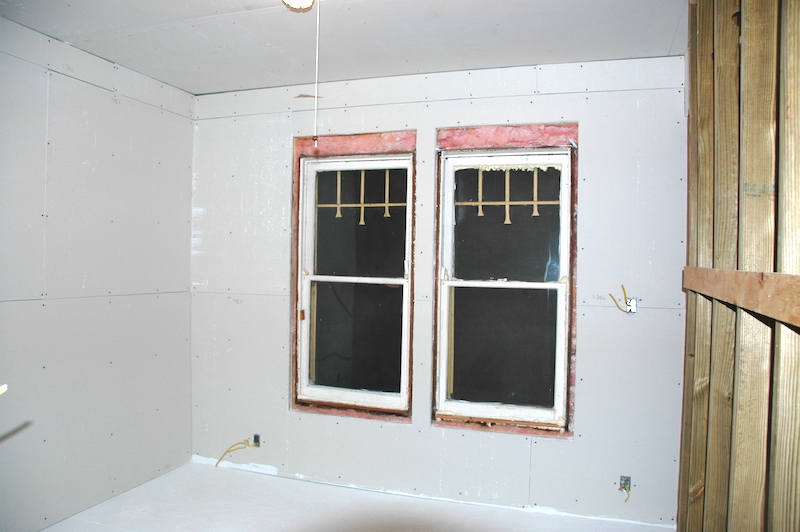 Oh yay! We’ve got walls. Note the weird pink space around the windows: again that is framed to make replacing the windows with the new models we’ve selected very very simple. We’ll just have to pull off the outside wall of house. Easy as pie…or is it cake?

And that brings us pretty much up to now regarding the bedroom. It’s small, needs to be wired up and needs the new fan…oh and a bedroom door, which Errek is currently installing as I type (all of 3 hours before his mom’s plane lands), but it’s sooooooooooooooo nice to actually have a real, honest-to-God bedroom. 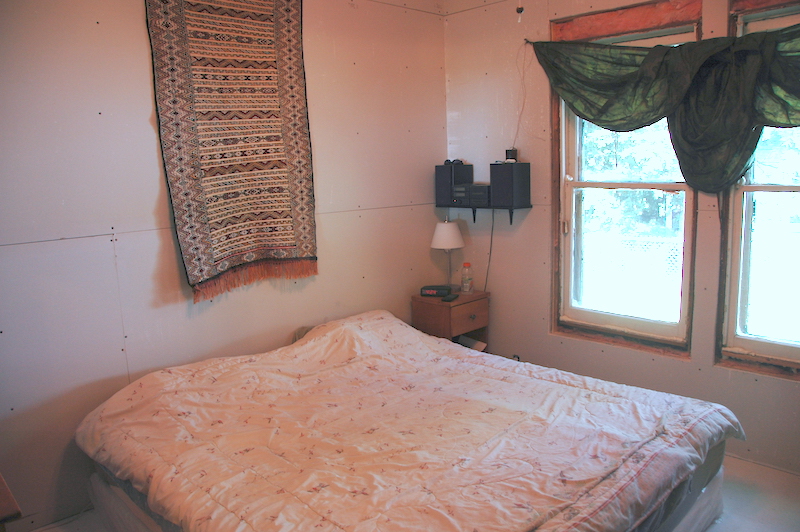 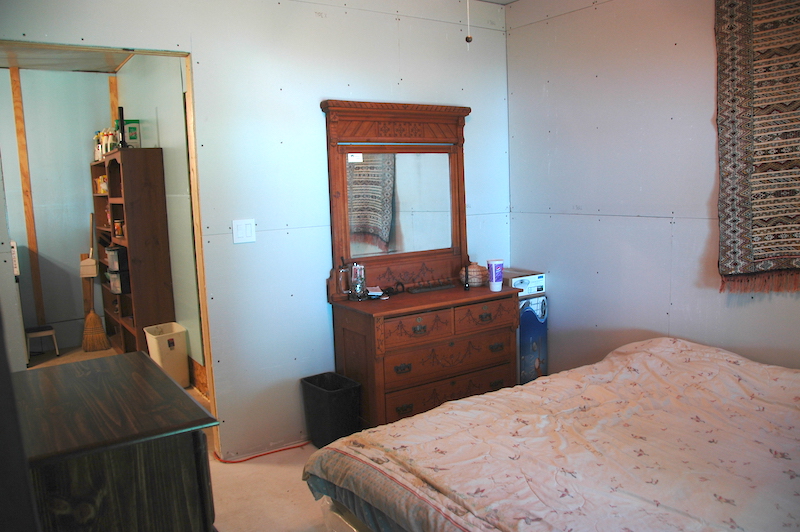