Now it was time to tackle the living room. We aren’t ready yet to finish it out like we have the bedroom, bathroom, and closet (mostly because we ran out of money) but there was one bit of finish out that absolutely had to happen — the back wall.

A little back story: When Errek bought the house it didn’t come with any appliances, the kitchen had a hole in the floor, a leak in the roof, and various other leaks, cracks, crevices, and holes. The kitchen was a poorly constructed add on, and it showed. So we resorted to using it as storage space, and nothing more.

In the winter, to keep out the cold we separated the kitchen from the actual livable space using foam insulation. It did the job, sort of, but it was time to officially condemn the kitchen, it was time to build a wall. 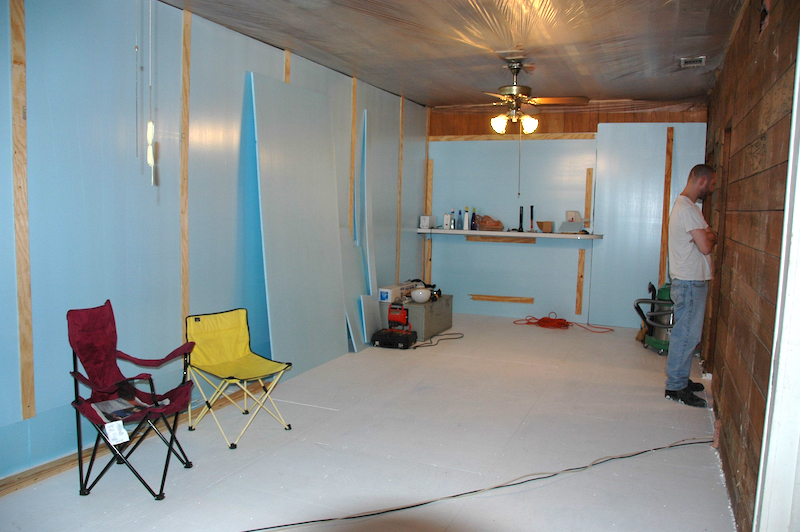 Keep in mind this is the night before Errek’s mom arrives. 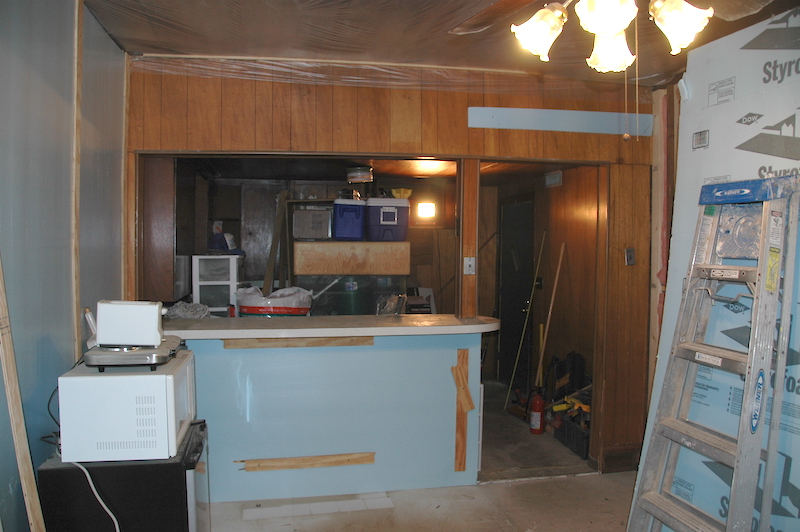 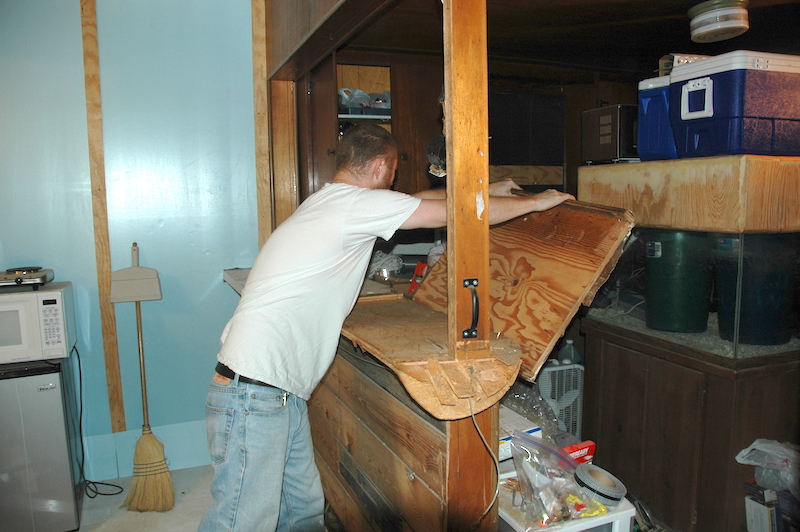 Jeez, can you put some more nails in that? 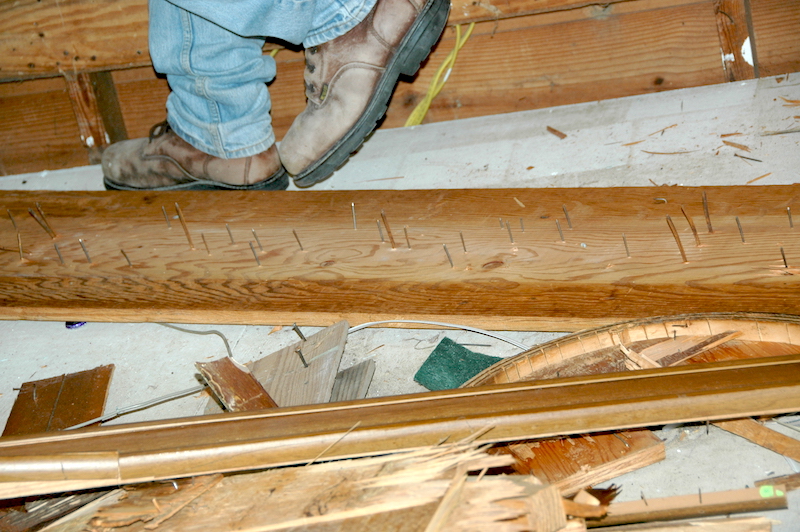 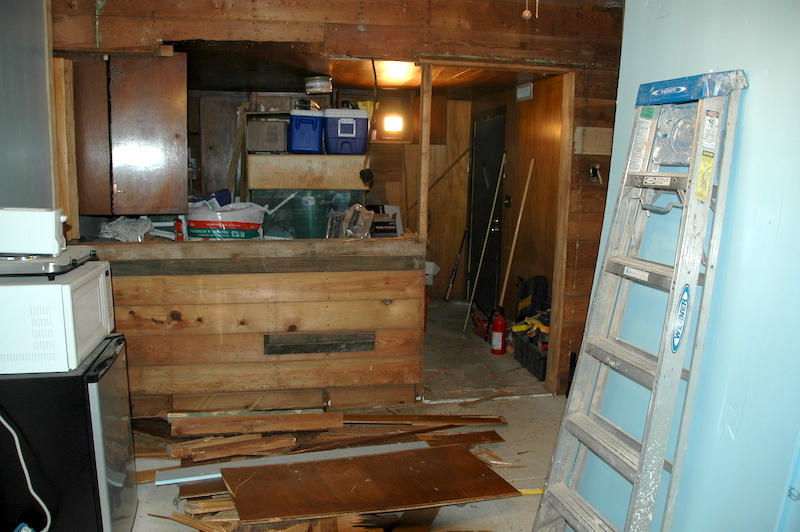 It was at this point that Errek discovered three very scary things. One, there was no header. This was no surprise, we’ve never once seen a header in this house that we didn’t build ourselves, but considering that it was such a wide span it would seem that someone at some point would have wondered “so, what’s holding this roof up?” Two, the ONLY stud along the bar had been cut in half, thus further weakening this now load-bearing wall. Three, the entire weight of the kitchen roof (which was our only access to the attic) was held up by three nails in one of the old pine wall boards. Holy crap!

So, first things first, Errek build a support wall to hold up the kitchen while he worked on the header and load-bearing wall. 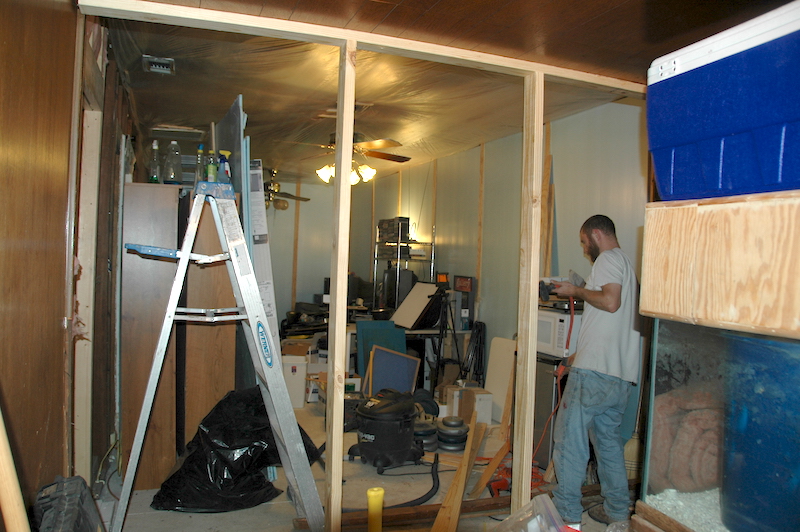 Once that was in place he built the header and started studding it up. I’m not sure if “studding it up” is a real expression in framing, but if it’s not it should be. 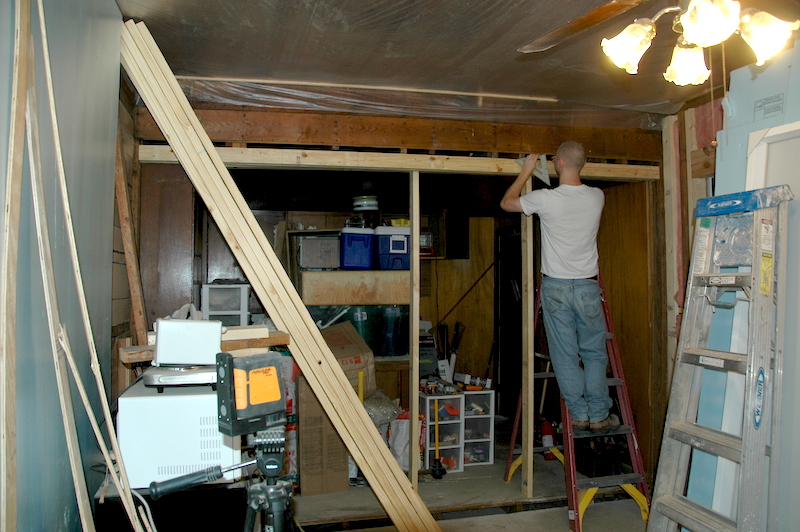 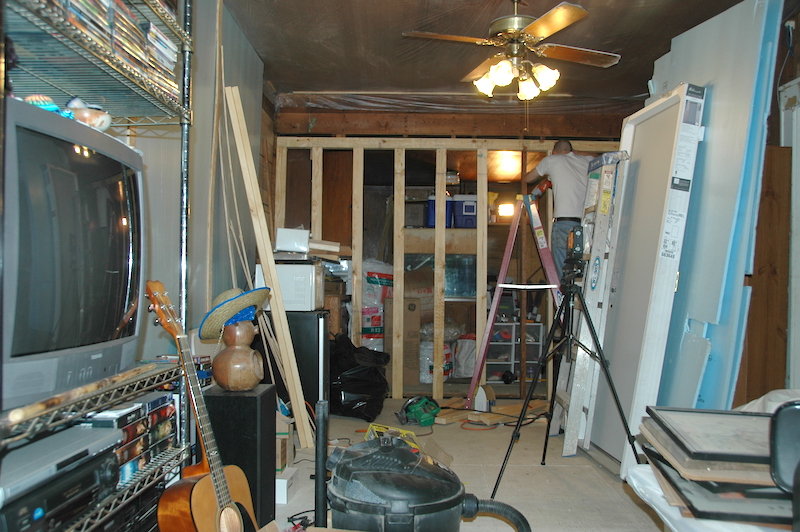 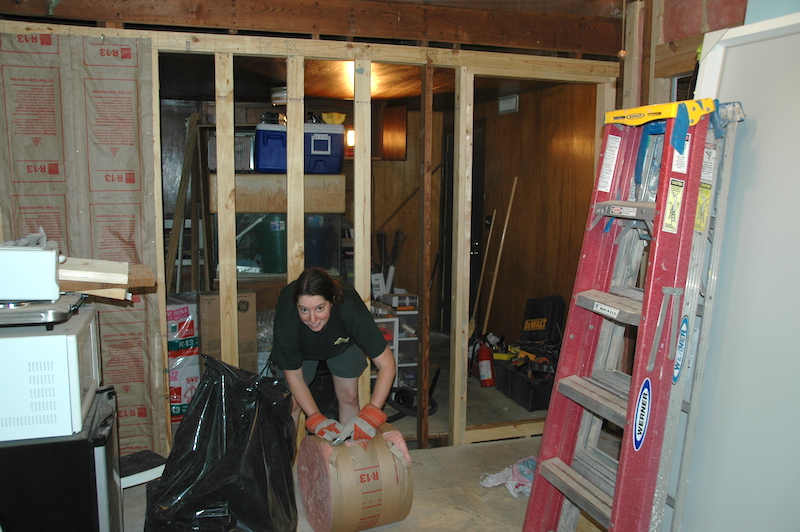 While I insulated, Errek installed the new back door, the one on the kitchen is now the back-back door. 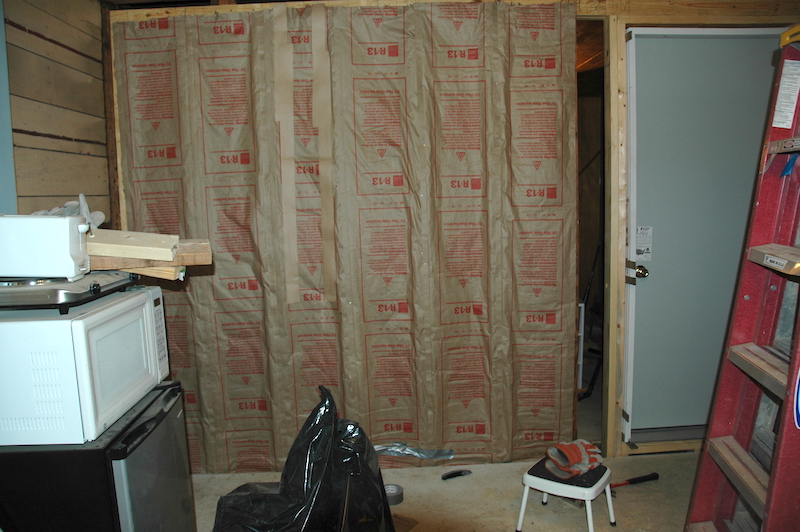 Then we layered on the OSB and some rigid foam and voila, a wall. 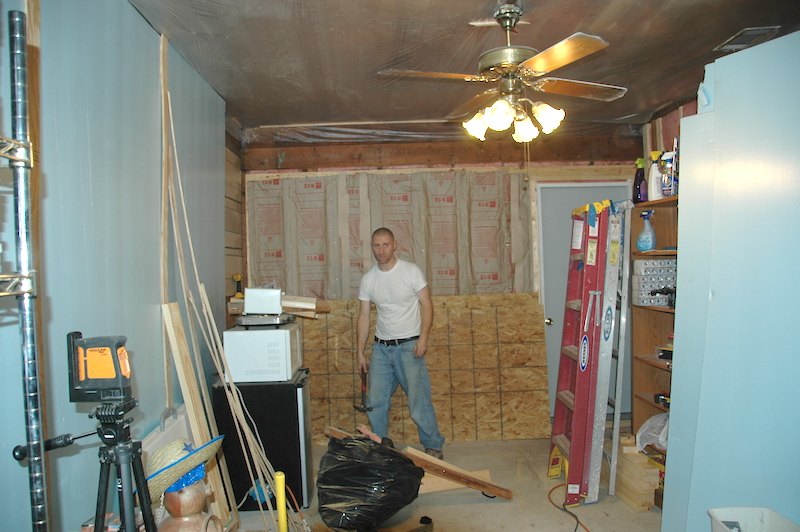 It was at this point that my Ms. Clean gene kicked in and I had the kitchen up and organized within minutes. 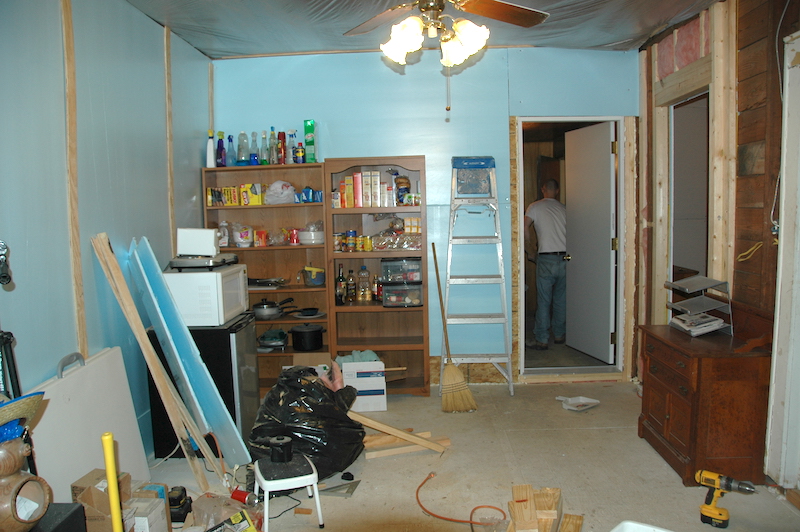 I’d been waiting weeks for this moment — I wasn’t going to bed until the living room was everything I dreamed it could be. Sadly, for Errek, it was 3am when he went to bed (and he had to wake for work at 7 the next morning). So I stayed up and sorted everything out with the dusting and arranging, and finally we have a living room. It’s no longer one of those live/sleep/eat/saw/hammer combo rooms. No, now it’s just a live/eat combo room. 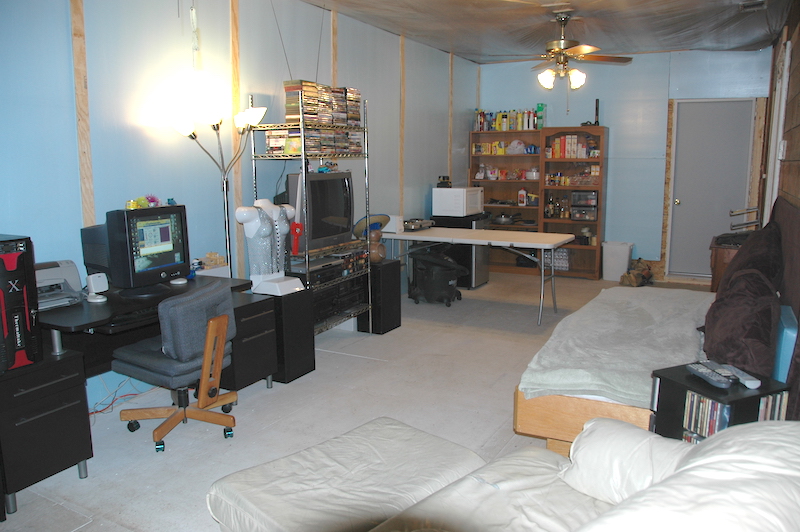 What’s this, a minimalist DJ booth? Nope, that’s our kitchen. Note the absence of an oven. I’ve never craved homemade chocolate chip cookies like I do now. It’s the little things, like an oven, you take for granted. 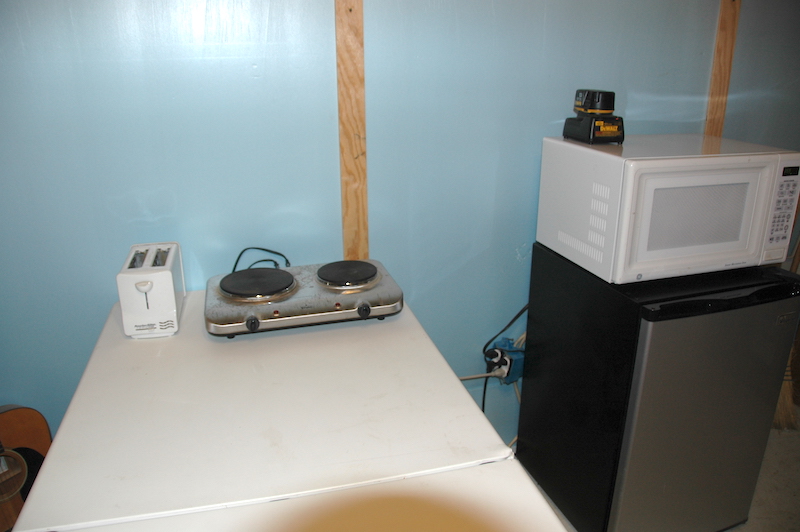 What’s this, the bridge of the Starship Enterprise? Nope, that’s our “A&E corner.” 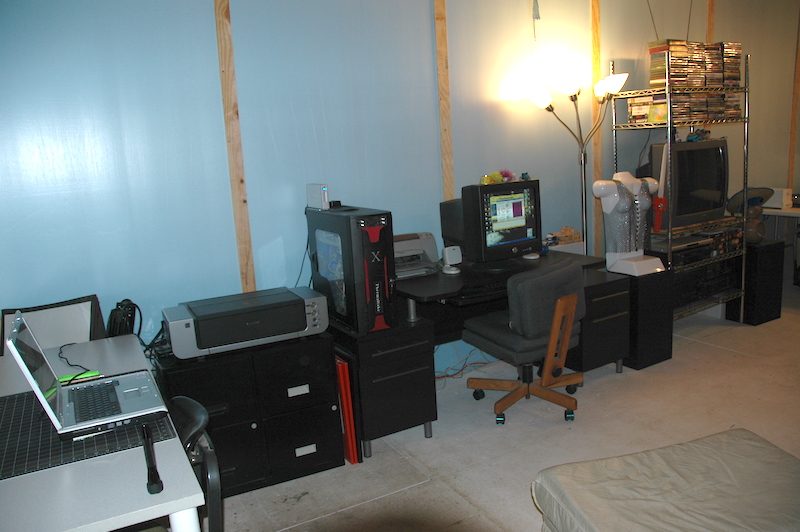 I love how the room is so big, the flash doesn’t even illuminate it all. 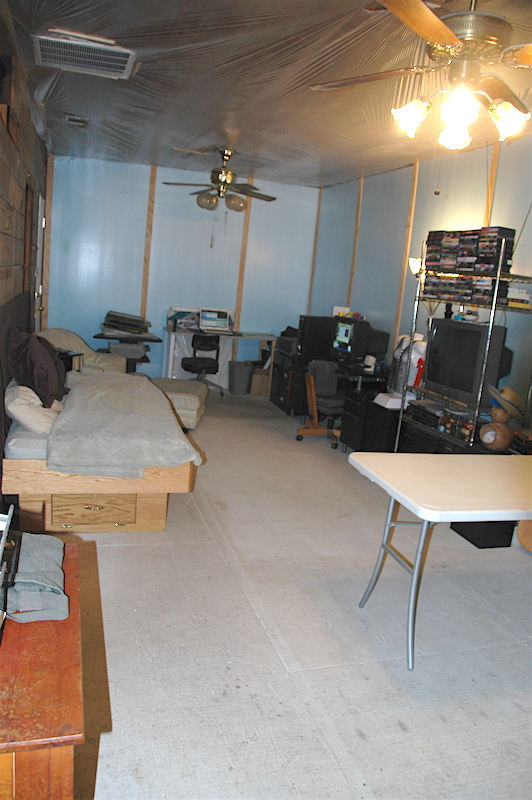 And so we leave you, gentle reader, exhausted but with an extra spring in our step because we’ve got several rooms and a closet (almost) finished. That’s pretty huge…if you’re us or have low-expectations.

Well, it’s time we say so long, farewell, auf Wiedersehen, adieu…adieu, adieu, to you and you and you.