Yep, some jobs just really suck, but have to be done. The sewer line replacement was (in every possible way) that job. When we first built the new bathroom we replaced all of the old cast iron plumbing inside the house, but there was about a sixty foot stretch of old pipe that connected the house to the city sewer line and ran under the driveway which would clog up every six months or so. After a while snaking sixty feet of sewer was just too gross to keep doing. So we decided to talk to some plumbers about the cost to replace it. The cost ranged from $1300 to $4000, all of which was ridiculously too much for us to stomach shelling out. So we decided we’d tackle this job, like almost every other job, on our own.

The job started like most, a vacation away from having to think about it. We visited my parents in Tyler for Christmas, where one morning we woke to find that some sort of horrible crime of nature occurred on their back porch. Translation: cat fight. We turned all CSI trying to understand the crime scene. We were fortunate to have my sister, a talented chalk line drawer, on hand. 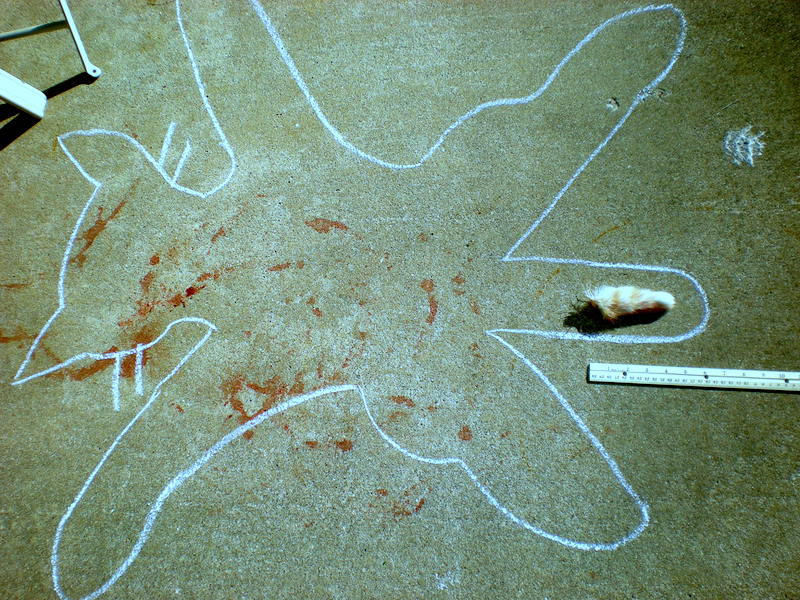 Yes, that is a piece of tail. Yes, it was gross. Don’t fret, the cat survived. Those country cats sure are tough little fellas.

Okay, speaking of tough, back to work.

Step one: remove part of the concrete driveway. 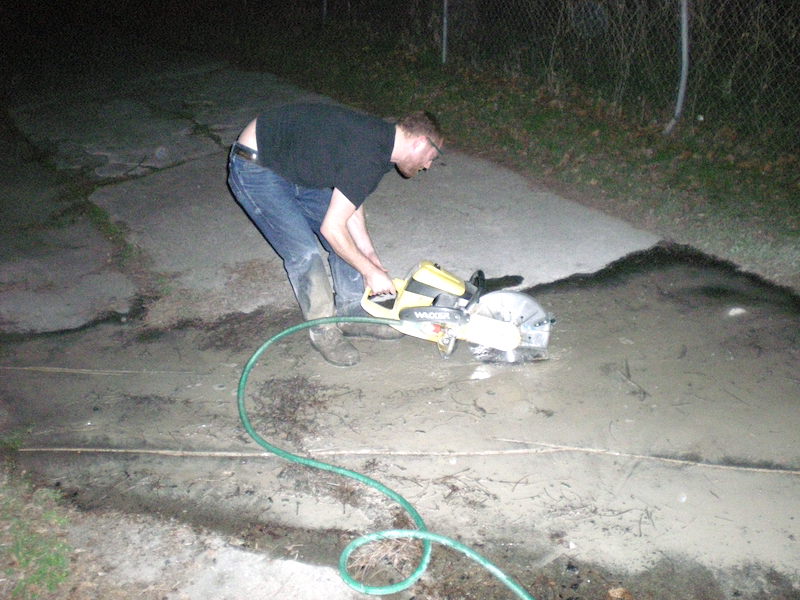 After Errek cut the path, we used a 10 pound sledge hammer and a pick axe to pull that section of drive out. I forgot to take photos of the “during,” but here’s the “after.” 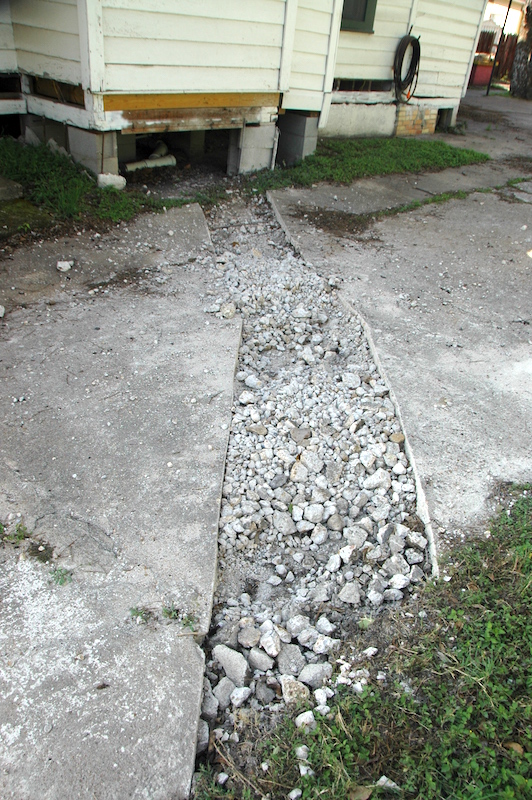 Then we had to get rid of the rebar. Fortunately the driveway wasn’t built very well and there were only three pieces of rebar across the whole drive, so that was the easy part. 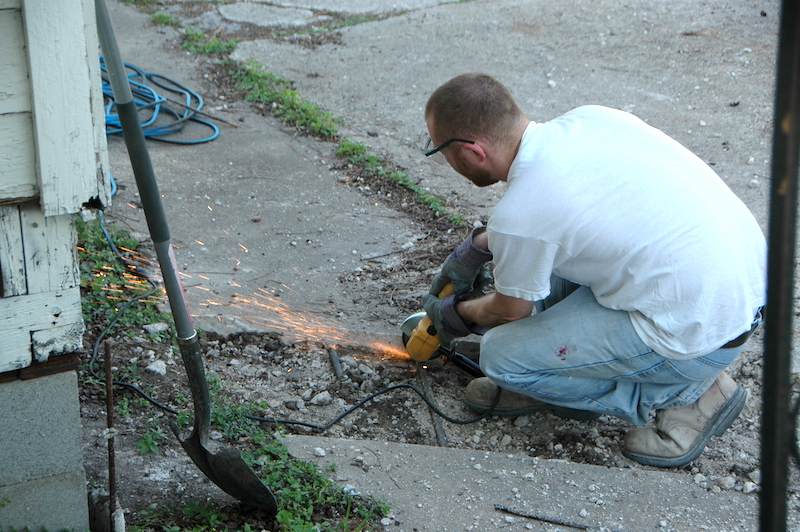 The hard part came soon enough. Of yes, the digging… 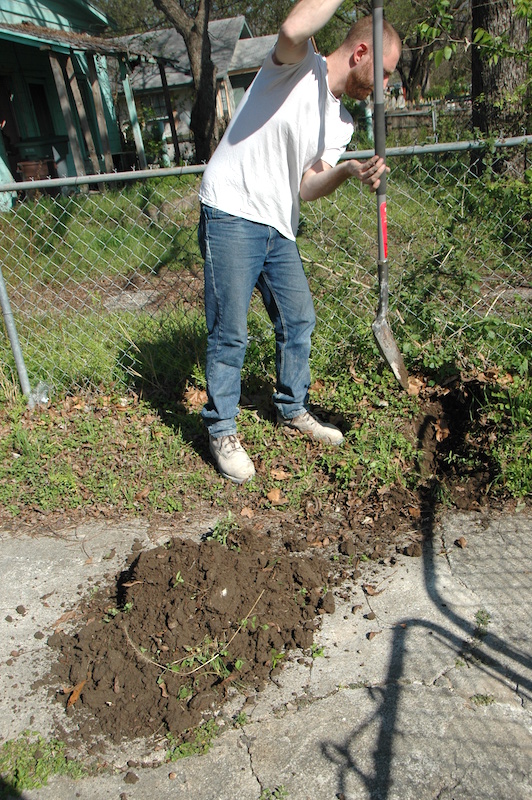 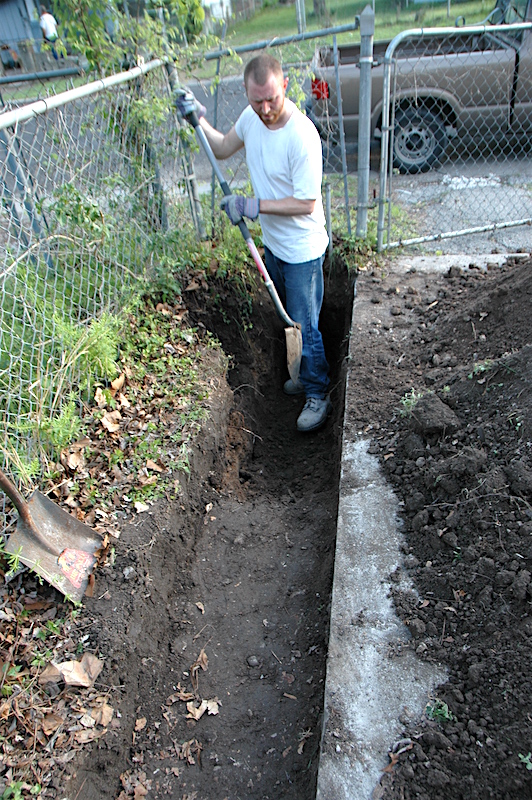 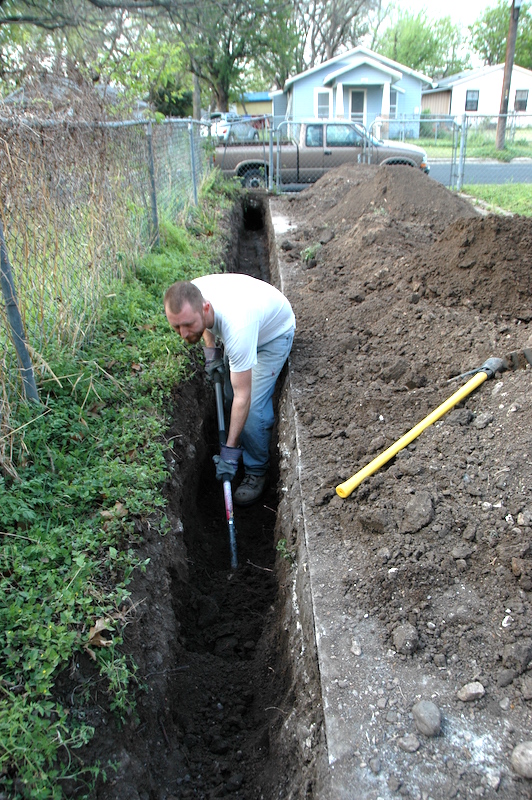 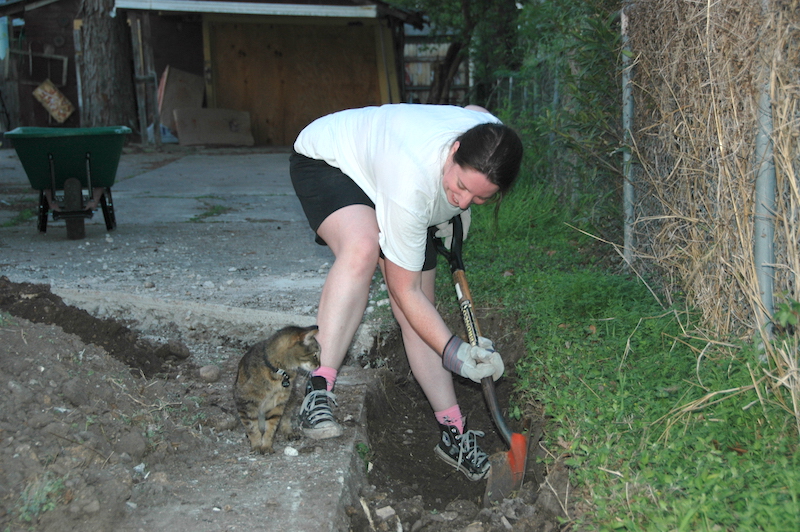 The job foreman kept us on a pretty tight schedule. 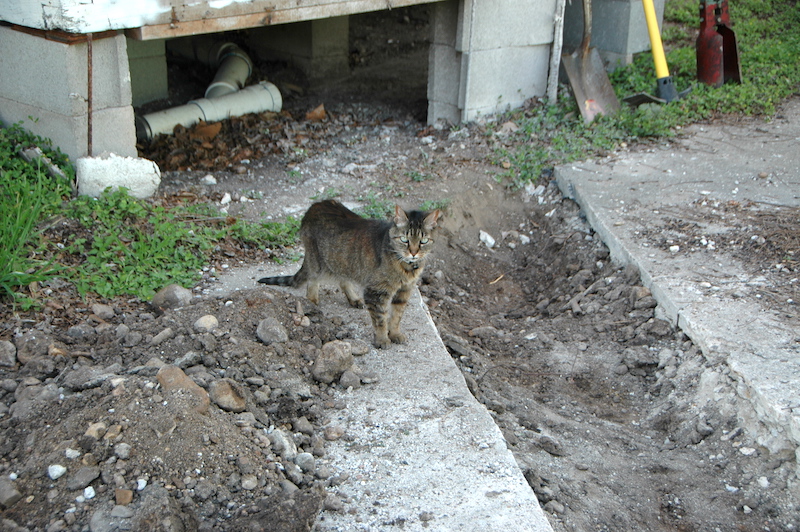 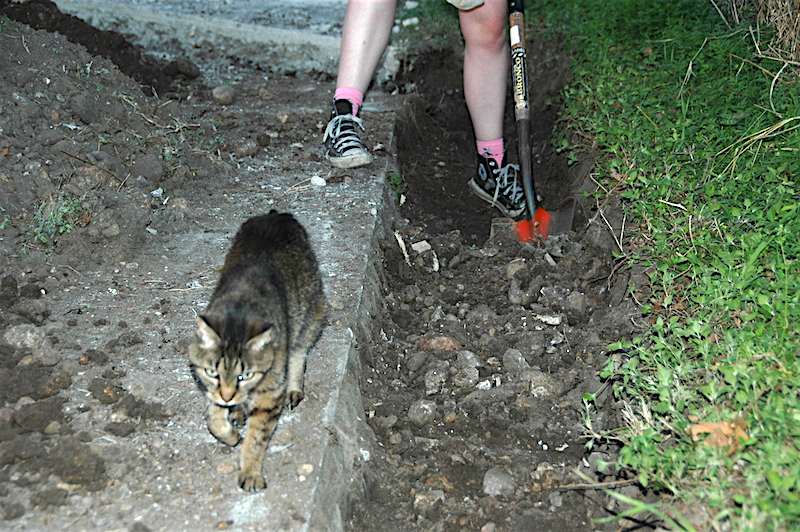 She was relentlessly pushing us to work faster and harder, and all the while she just lounged about. Typical. 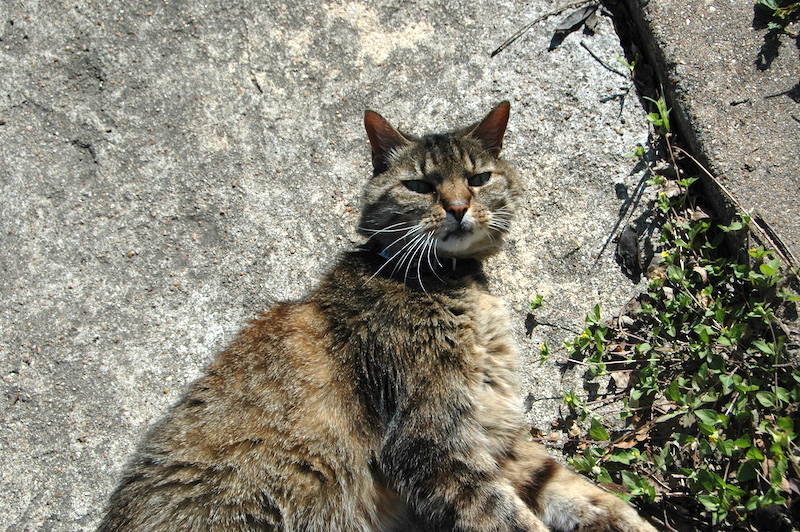 Oh and did I mention there was digging? In total we estimate we dug 360 cubic feet of dirt, forming a trench that was about sixty feet long, three feet deep, and two feet wide. 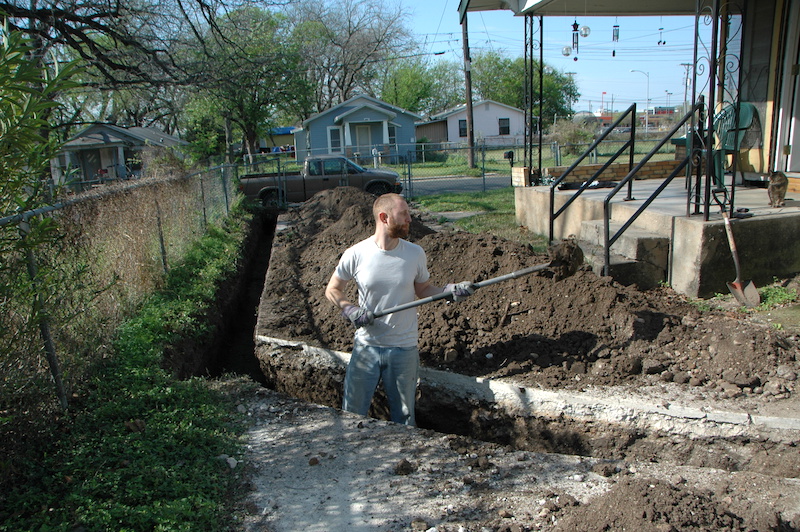 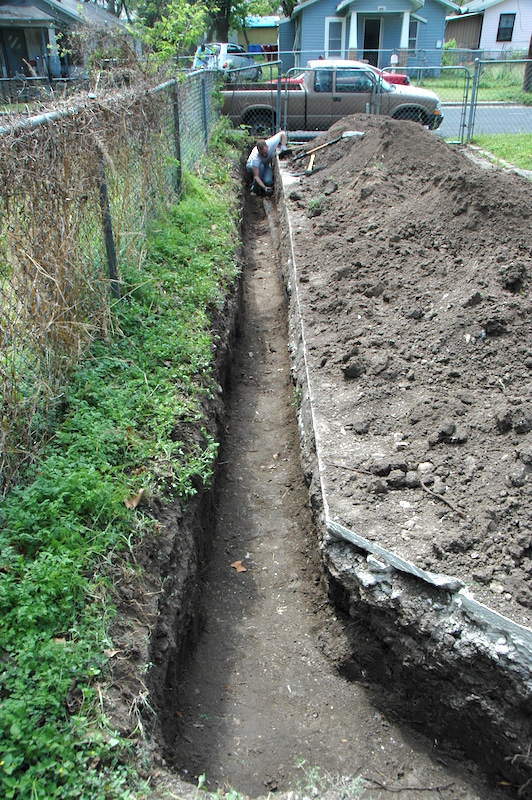 Once again we found that we have terrific neighbors in the Hernandez family. Apparently one night while we dug our way to China, they sat on their front yard drinking beer and playing with Briana, their granddaughter. Briana felt sorry for us and asked if she could come over and help us. Since Briana is only five, that would have maybe been a bit dangerous, but she effectively guilted the men of the family to find their shovels and join us in our effort. Rick and his brother Joe and Rick’s wife Carol and, of course, little Briana came over with some Bud Lights and some digging assistance. I’m pretty sure that Rick and Joe’s efforts saved us a good half a day of digging. They totally rule as neighbors. We love them like crazy.

With the digging completed we got to the easy (but sort of gross) part, disconnecting the old pipe and then laying and gluing the replacement PVC sewer line. 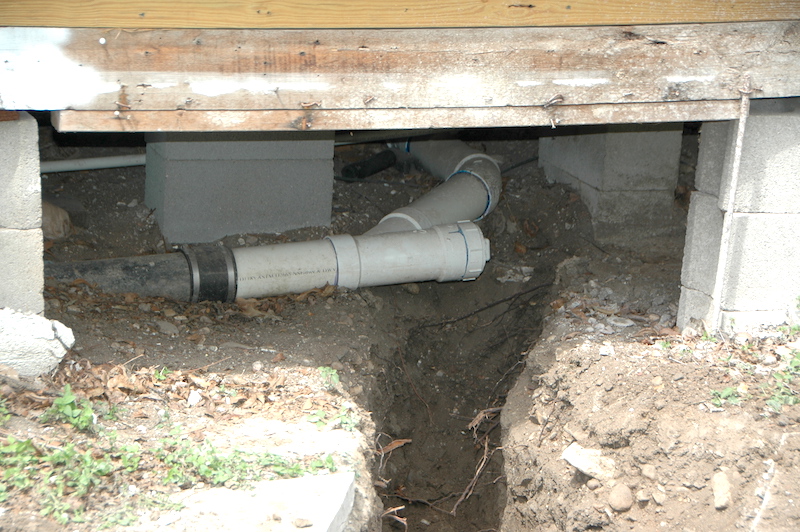 Hooray for the sawzall! 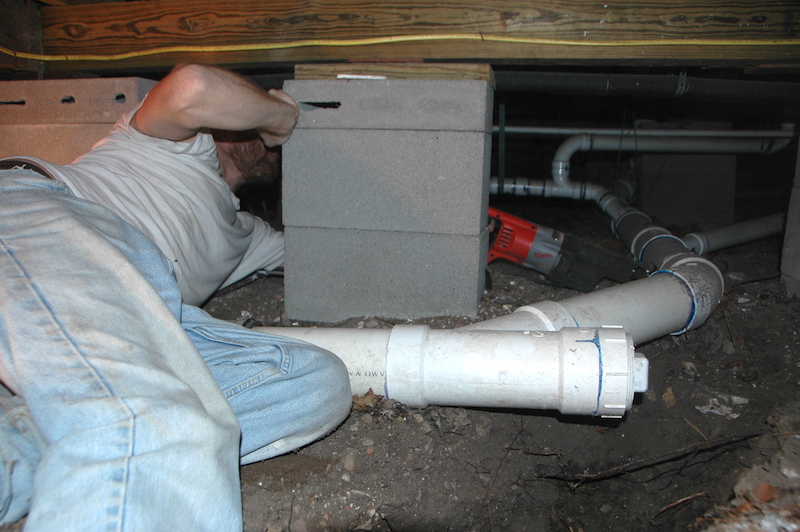 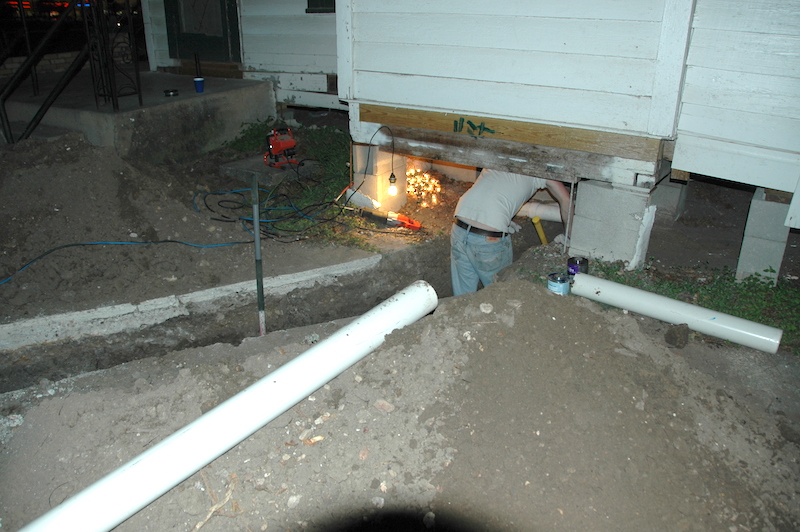 Then the extremely satisfying task of reburying the trench. Oh dude, that shoveling was sooooooo awesome. 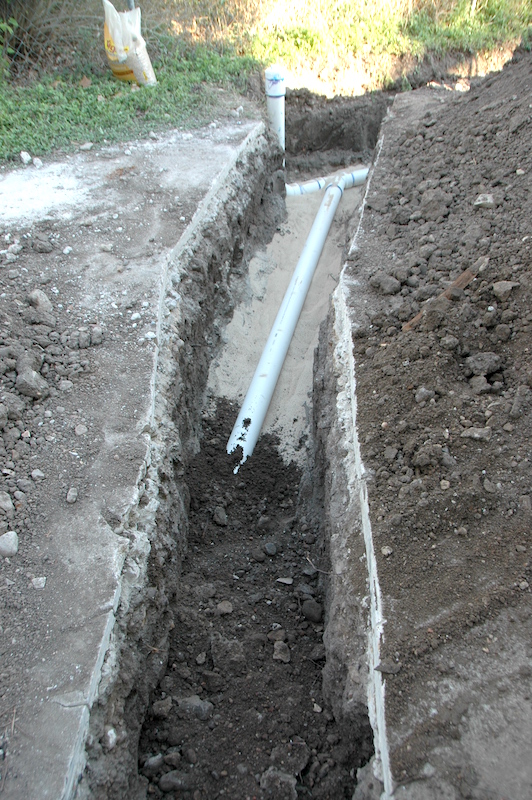 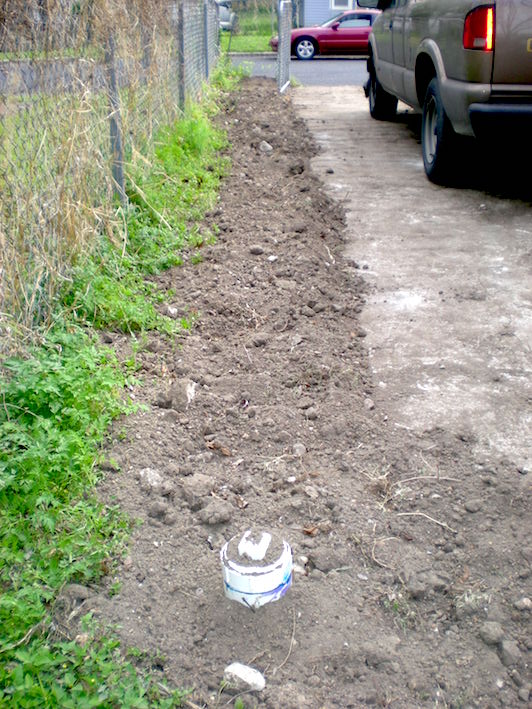 And that’s the story of how we got a seamless and fulling functioning plumbing system from top to bottom. Yayness!

But enough with the dirty jobs, right? Yeah, wrong. Now it’s time to finish out the living room…mostly.