Chapter 20: Finishing Out the Living Room…Mostly

Well, with the art show behind us we decided it was time to convert our weird windowless “living room” into something that half-way resembles a real house. Novel idea, I know, but that’s not as easy as you’d think. First we needed to take our rigid foam walls down, and uncover our windows, then remove the termite chewed wood to get to the studs, so that we could improve the framing. Trust us, this house will never ever come down. 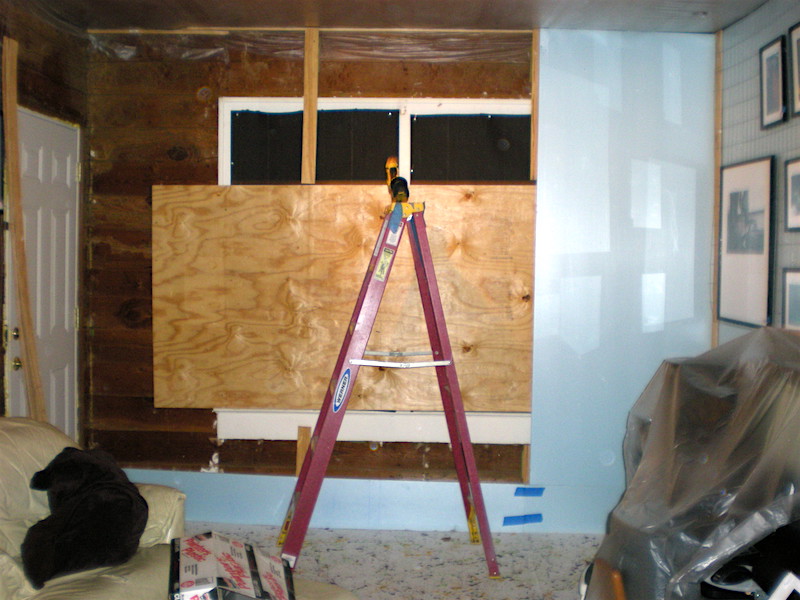 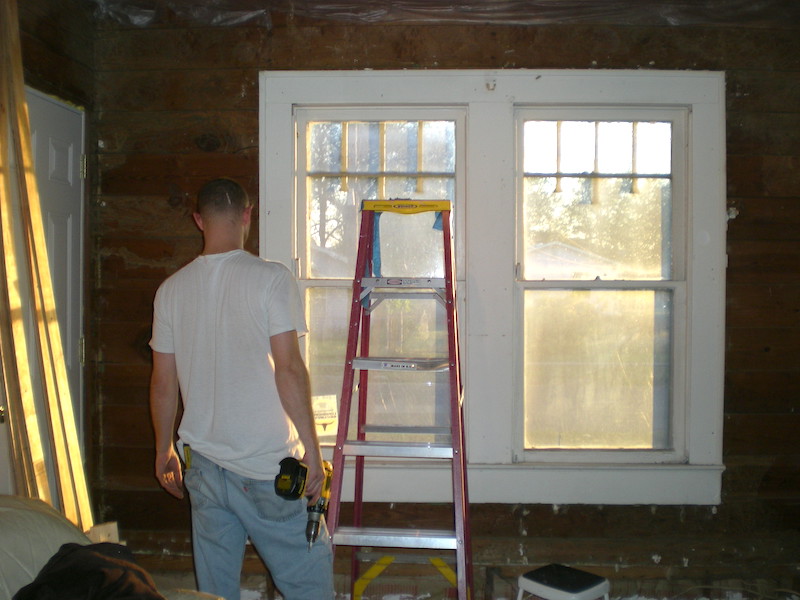 Then we insulated the wall (yep, the house is so old that there was no AC or reason for insulation when it was first built, but there is now).

“It wasn’t cotton candy like the guy said… my tummy itches.” 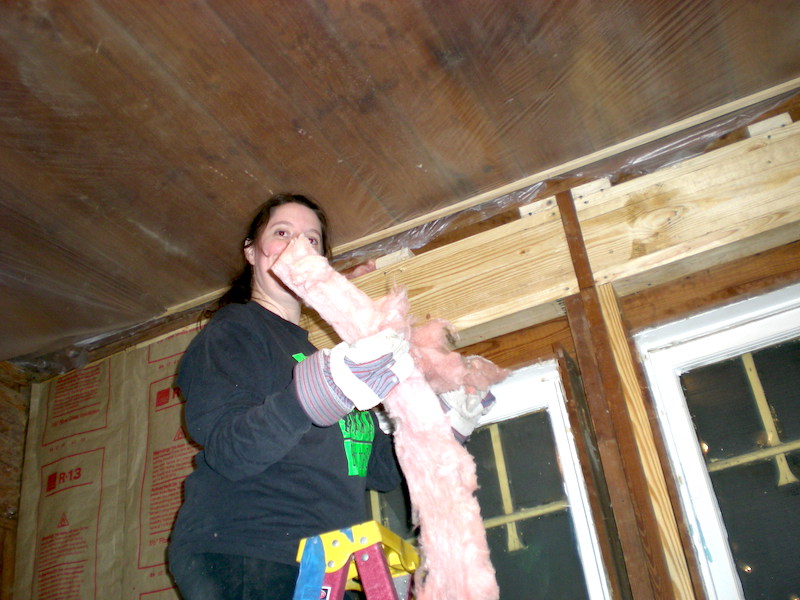 Finishing touch, window covering (aka sheet nailed over the window). 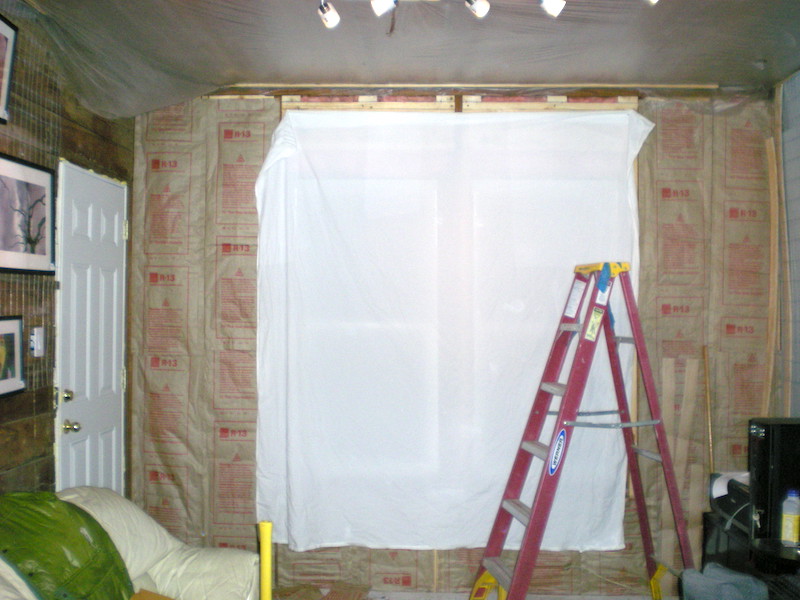 But wait, it can’t be that easy can it? OF COURSE NOT! This is Pleasant Valley Ranch where we have pocket doors to the bathroom, not some sissy ranch with normal swinging doors. Duh.

Huh? Pocket door? Well, that’s going to be…um…interesting to frame in, what with all that wood in the way. 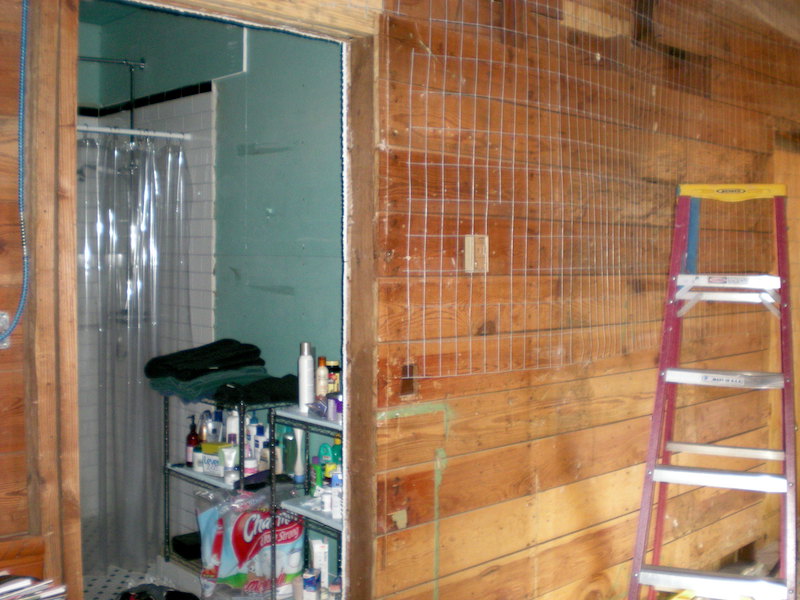 Time for some 0% pants demolition! 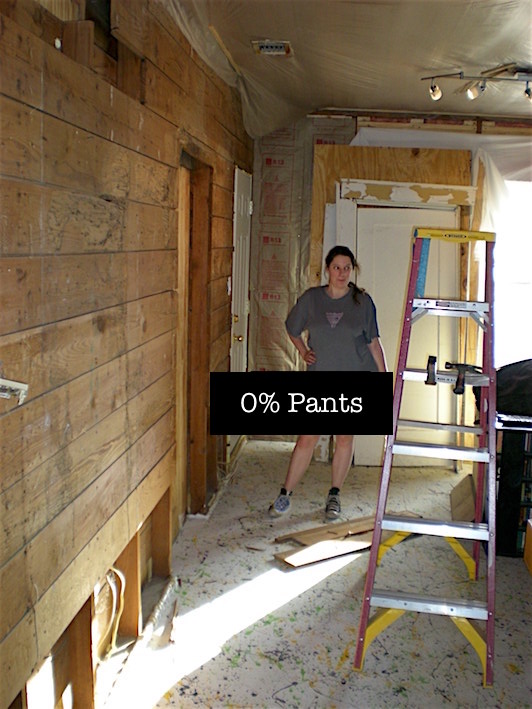 And some fire (aka grinding off all the nails that would be in the way of our sliding door). 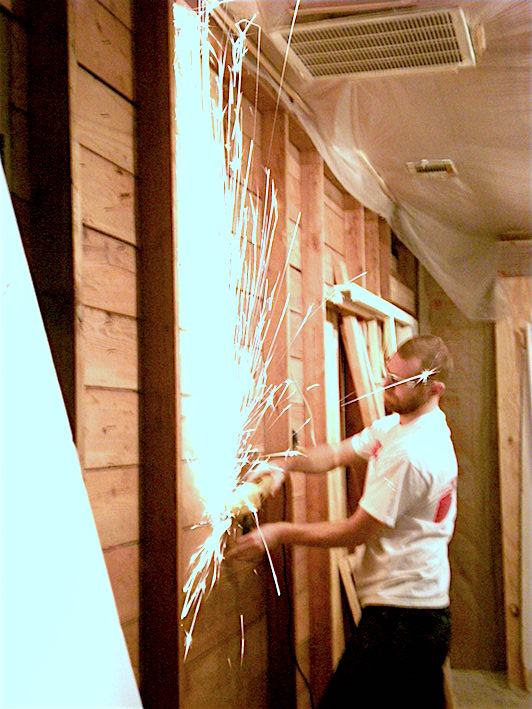 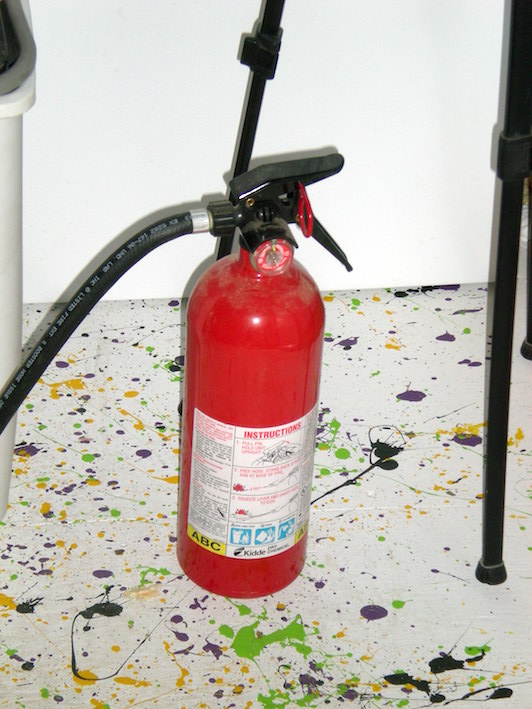 Now it came time for the “HEADER FROM HELL” (cue scary music). This thing was a beast, but for a good reason, or actually 3 good reasons.

I didn’t take any photos of us actually moving it into place, because as I mentioned HEAVY, but here it is in place. 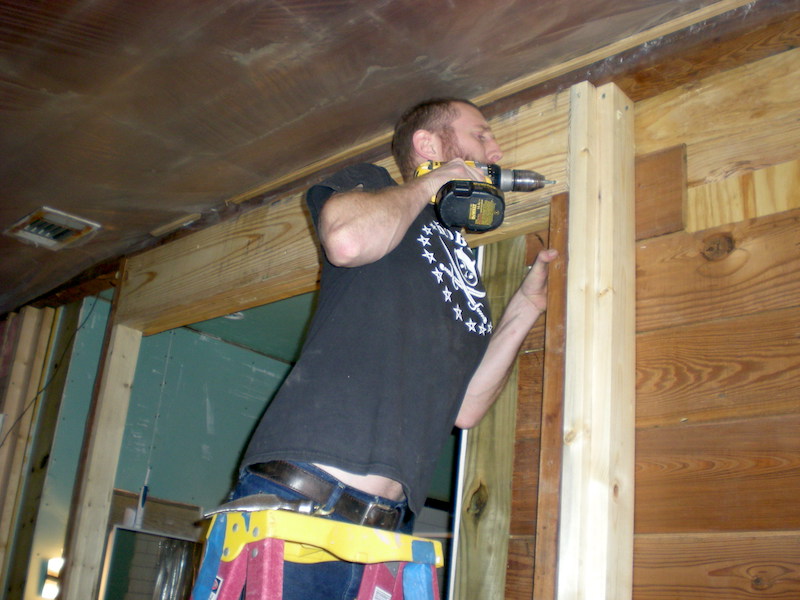 Then we framed down to the door. 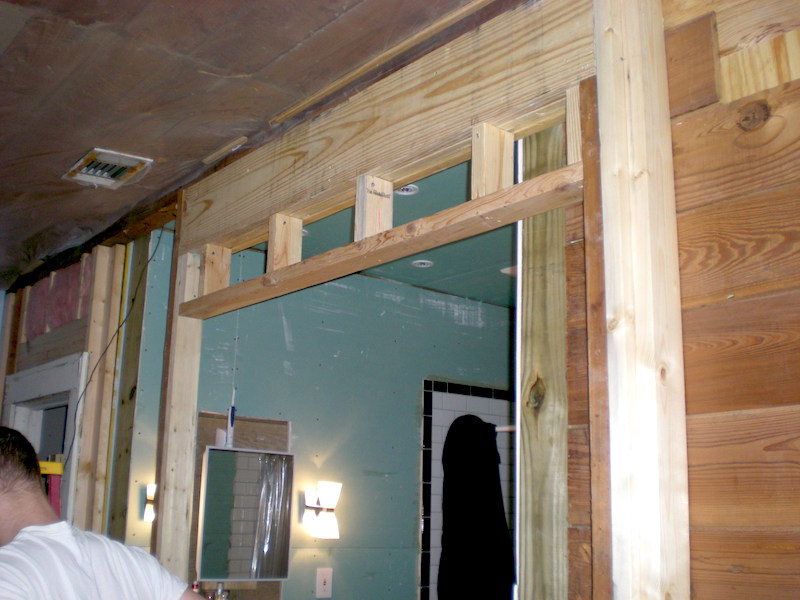 Then we framed in the pocket door cavity. 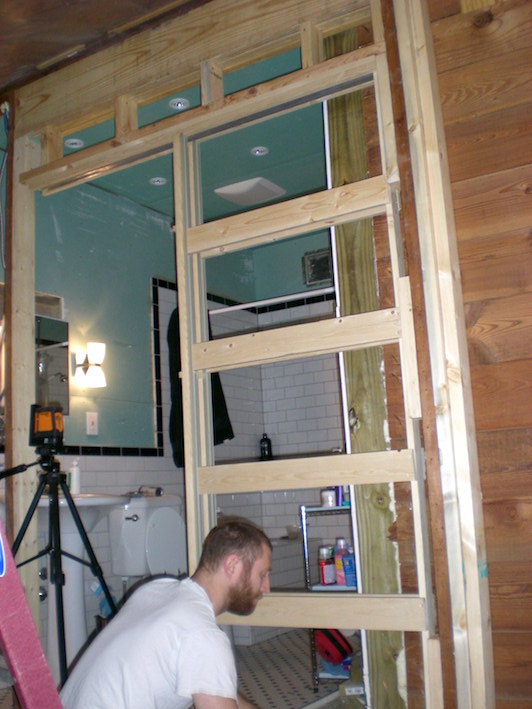 Then we hung old “temporary” door from the track. 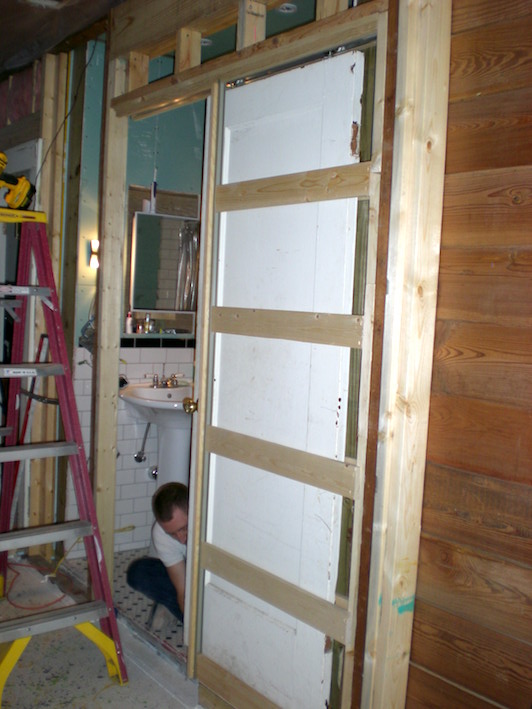 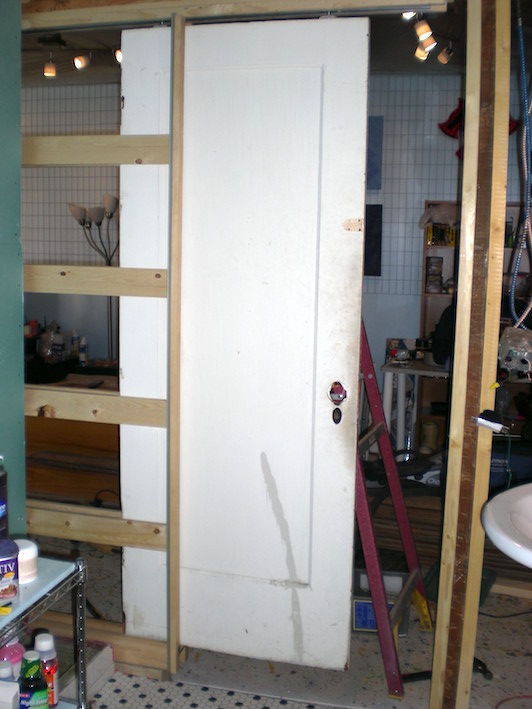 Oh yeah, and then we re-enclosed the bathroom. Details, details… 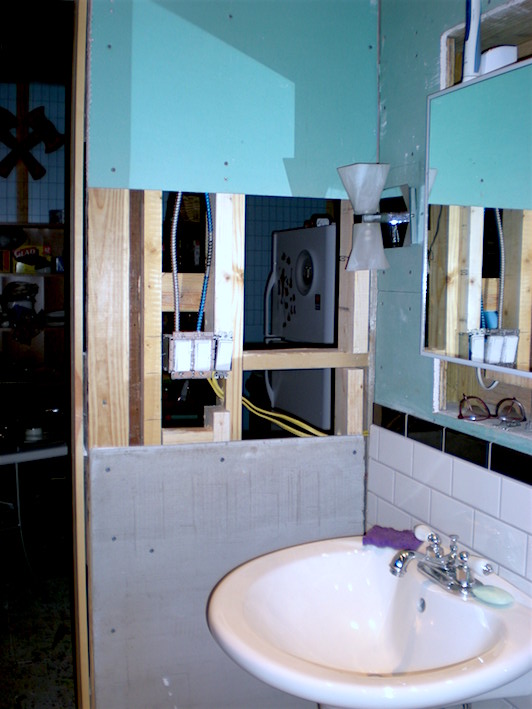 In the meantime, NEW TOY! 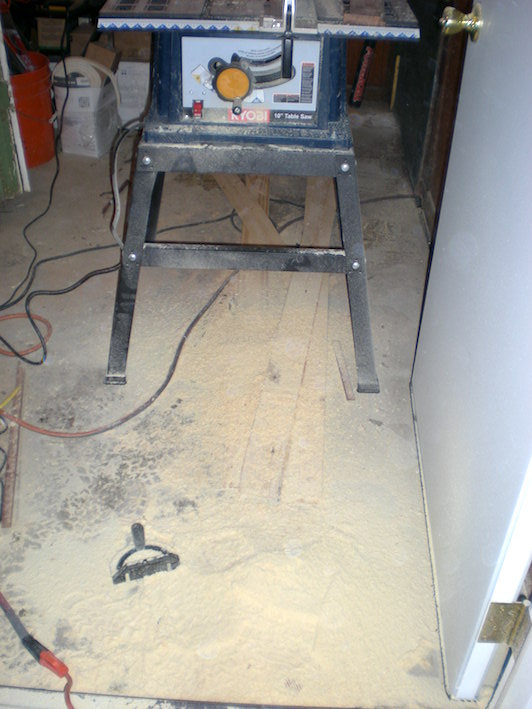 Oh and still not done. While we were screwing with the center wall, we decided to finish out the framing of the wall to Lucy’s room (note the plywood wall to keep the cat dander out). 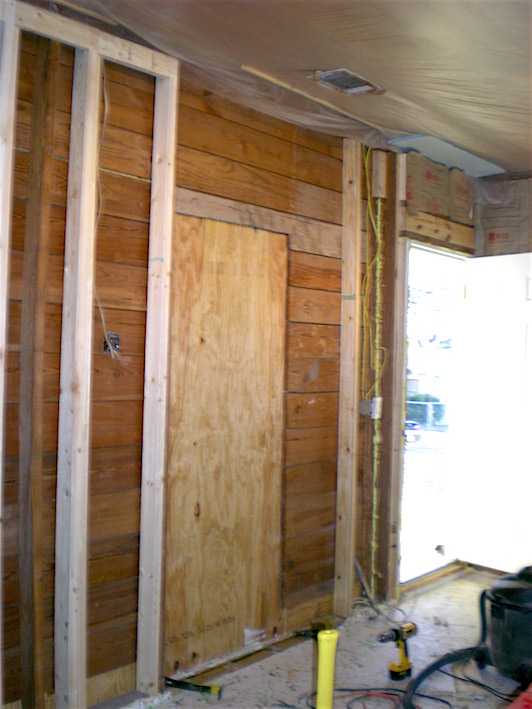 We also wanted to move that door cavity a bit so that the door would sit against the wall when open (the prior arrangement left a useless triangle behind the guest room door and that’s just wasteful). 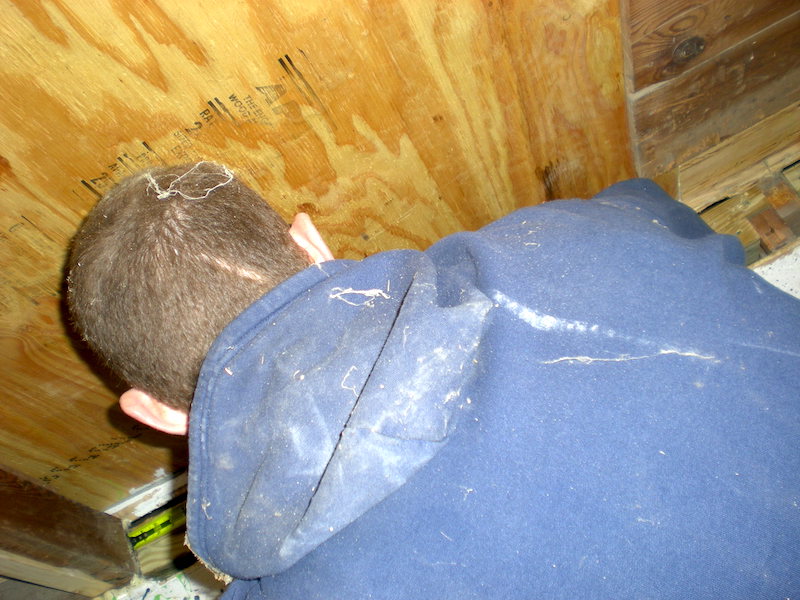 Ok sweet, yet another NEW TOY! 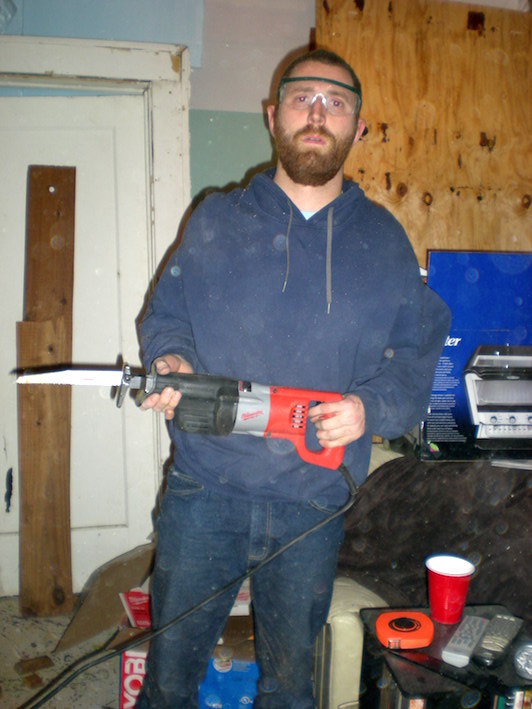 New toy in use. 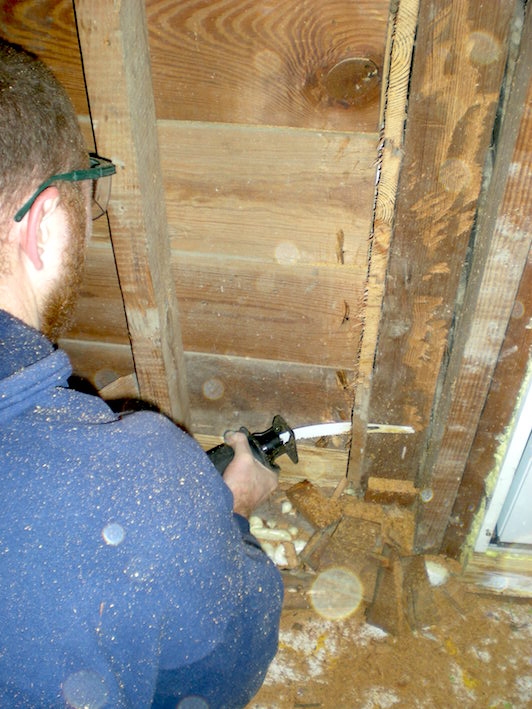 It was in the framing of the guest room door header that we had a tragic mishap. Perhaps I should start wearing some metatarsal-protecting boots, socks just don’t give you that much protection. The sock did however seem to slow the headers momentum so I got a bad scrape and bruise rather than a broken foot. Yay! 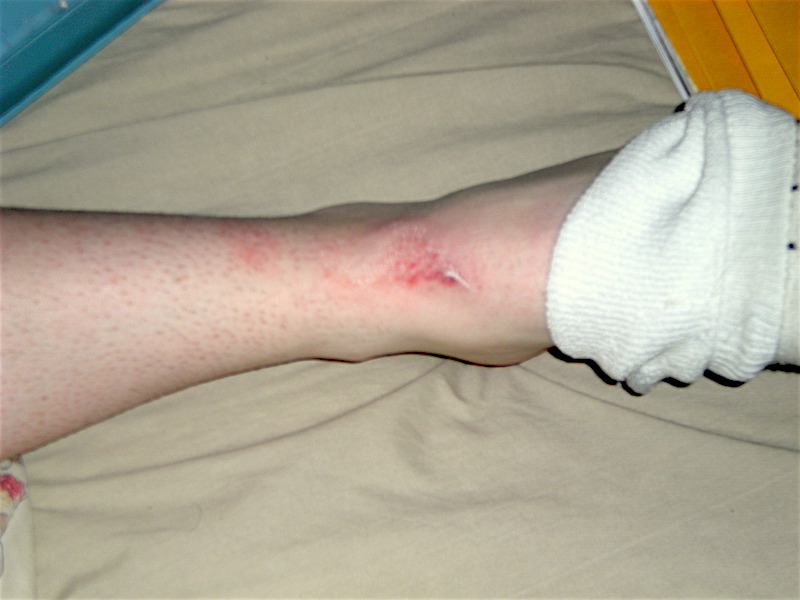 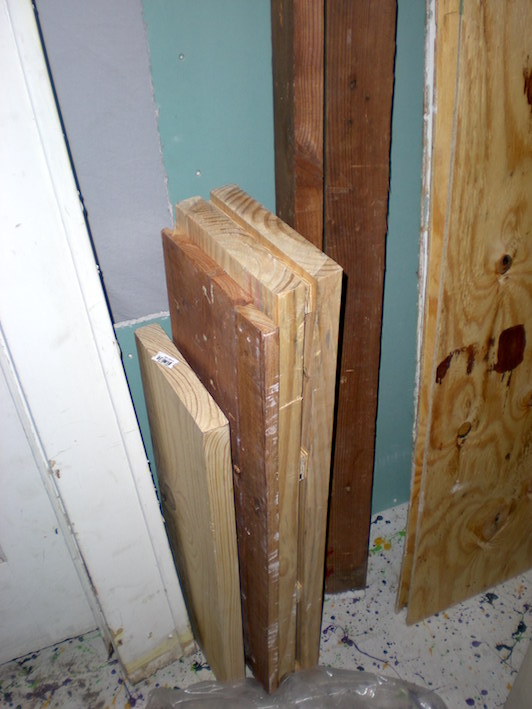 Then one last door, the front door. *sigh* Okay, so basically we had to remove a lot of termite devoured wood, so that the front corner wouldn’t crumble under the pressure. In the process we managed to displace an entire colony of ladybugs. I’m sure we lost some karma points with that, but what are you gonna do, right? Anyway, I’ve been cleaning up after litterbugs lately to earn them back. 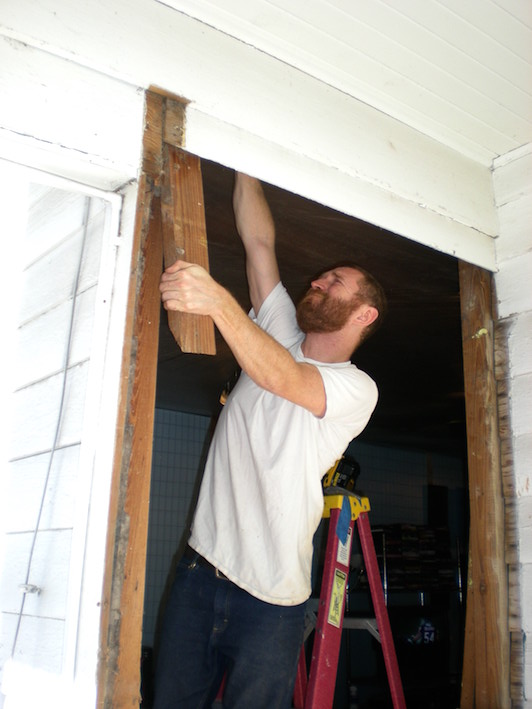 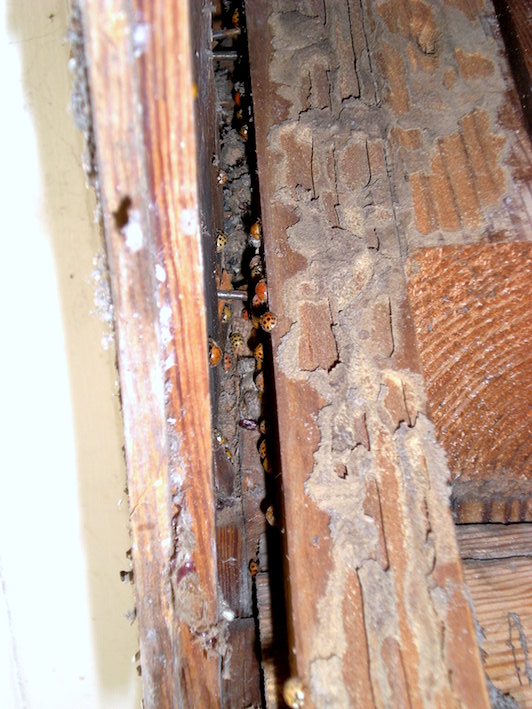 Foreman’s at it again. 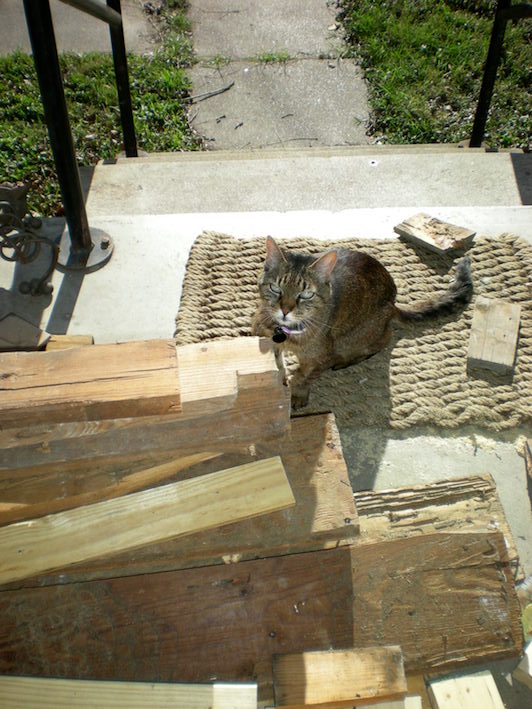 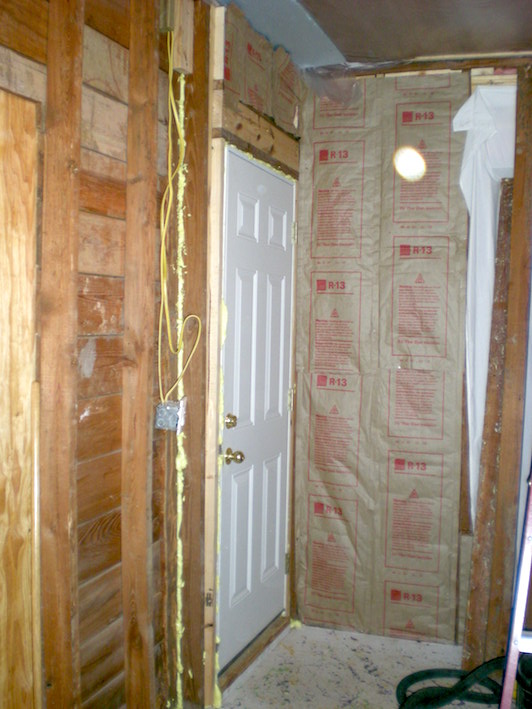 So…are we done yet? Of course not. Hello, a living room is made of four walls.

Dang, I’m tired, aren’t you? Too bad, onto the exterior wall.