For this next set of photos, you’ll need to don your protective eye wear and breathing apparatus. It’s gonna get dirty. 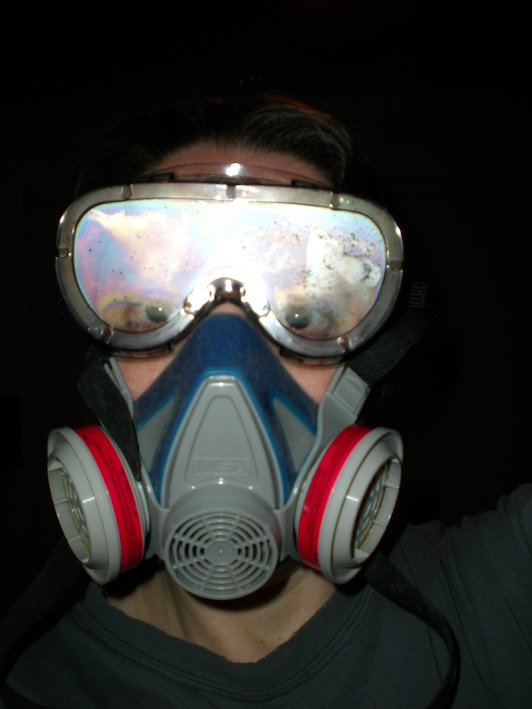 By now I’m sure you’re scratching your head, thinking, five walls, what is this, a pentagon? No silly, remember geometry? A box has six sides, and today we’re attacking the top of that box. Oh yes, that dirty wood ceiling has got to come down. Now, don’t get us wrong, we love the old wood ceiling and plan to put it back up, but currently it just opens right into the attic and rains insulation down on us when the wind blows. No joke, seriously, the wind was blowing through our space. So, let’s get started. 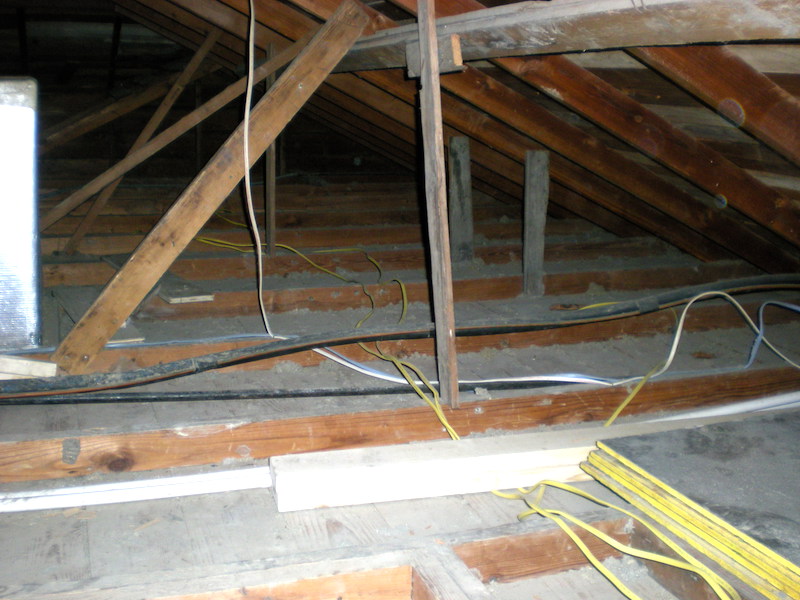 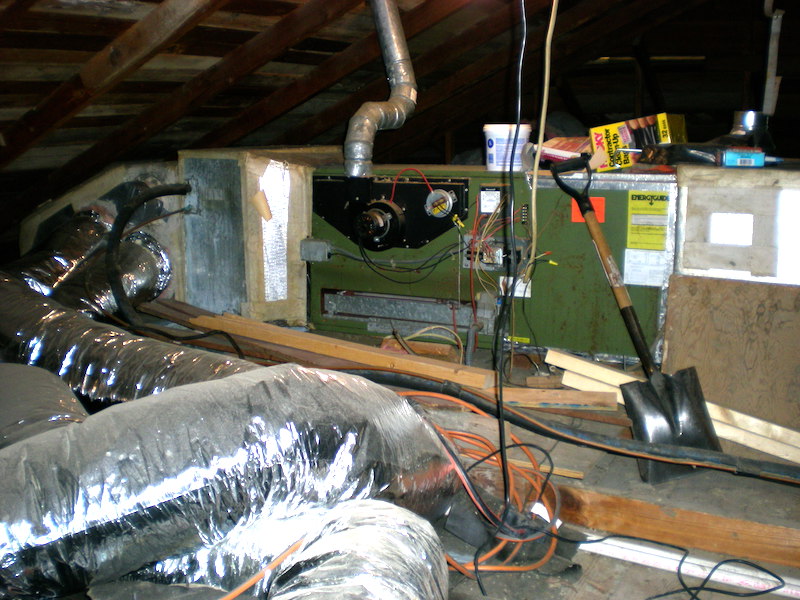 Ugh! What was that I was saying about “dirty”? Let me tell you, if I never smell 60 year old attic dust again it will be too soon. 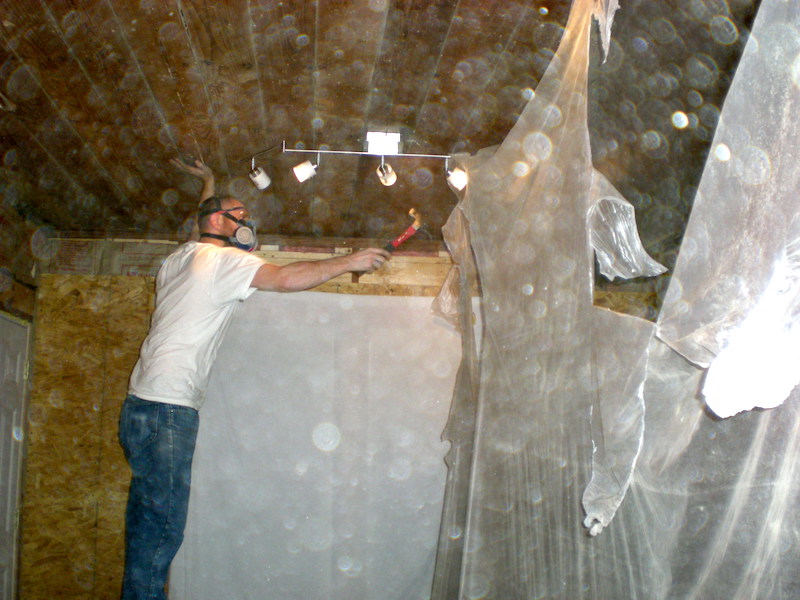 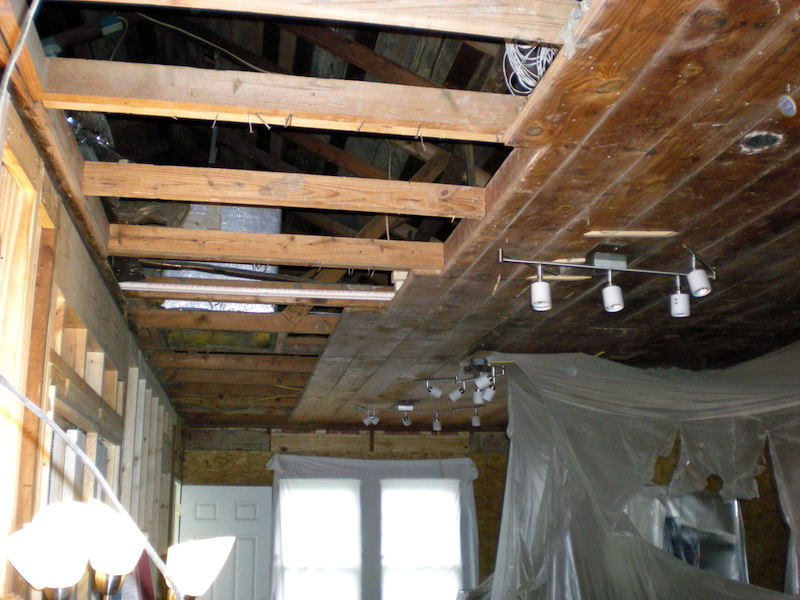 So the way this worked was Errek got up in the attic and hit the boards with our sledge hammer, this pushed the nails out of the joists without splitting the wood (since we want to reuse it later). Then I stood below and tried to catch the boards before they’d fall. It wasn’t as dangerous as it sounds, the only injury was a nail puncture in my arm. Hooray for tetanus boosters! 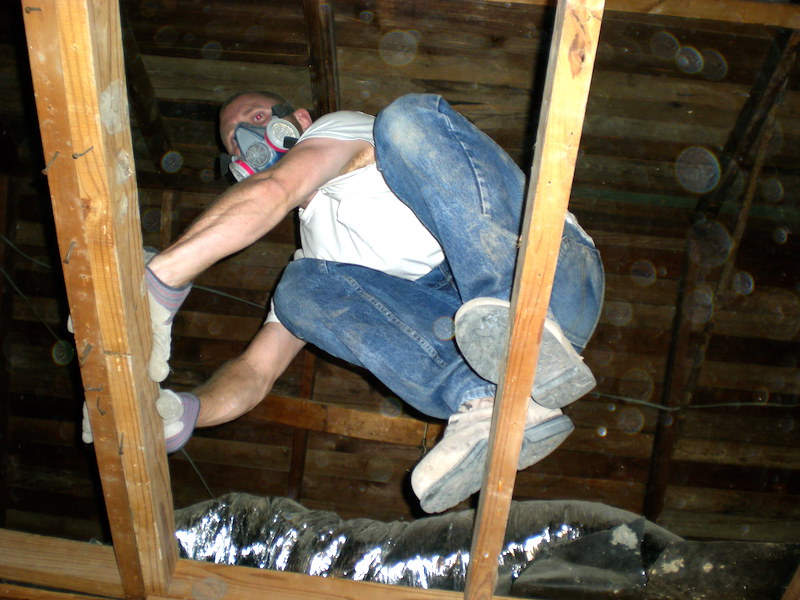 Did I mention that this was a dirty job? You know, a ghost hunter might think we have a bit of a ghost problem, what with all those orbs. 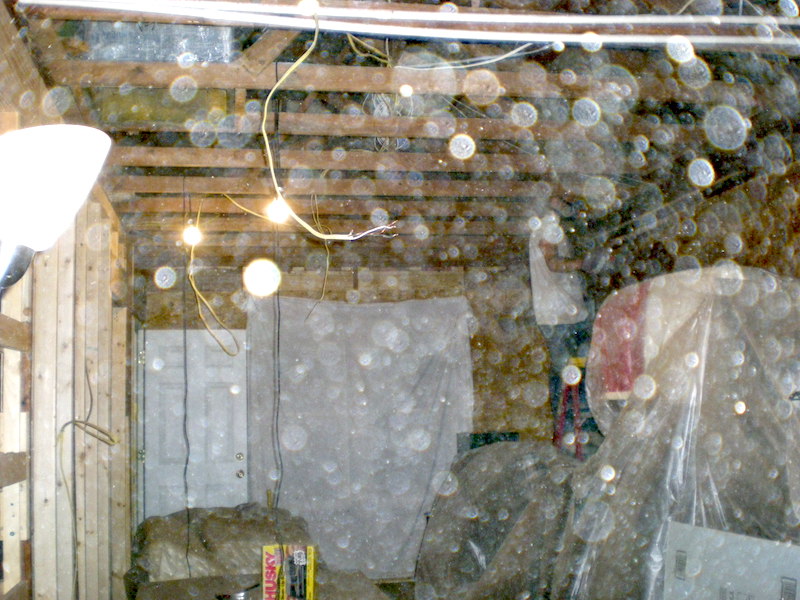 The above photo was taken at about 2am on a weeknight, aka way past our bedtime, so unfortunately we had to sleep for a night with the ceiling opened up. I didn’t sleep so well. I mean, even a tent has a ceiling.

The next day we decided that our cheap ass little shop vac was just not cutting it, so we upgraded. New toy! This thing could suck your guts out! It’s seriously bad ass and CHROME — a big plus. 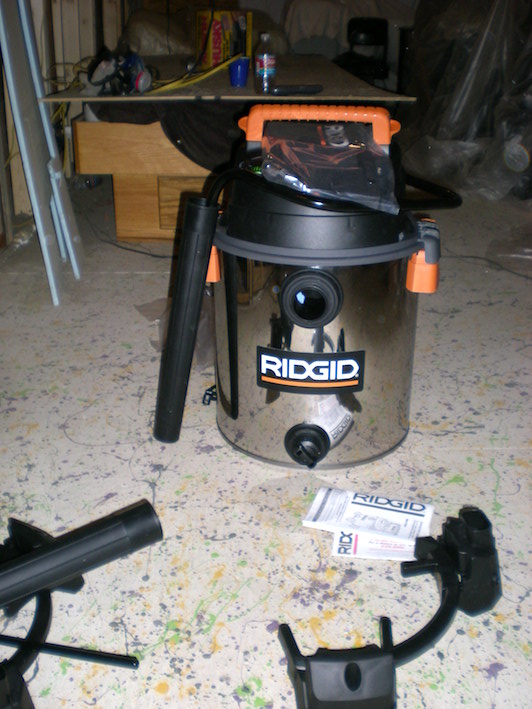 Ah yes, finally done with the dirty stuff. The next step was to reinforce the ceiling. It had been made of 2×4 joists with two foot spans, and it would bow under Errek’s weight, so it was time for something a little more solid. Enter Errek’s genius. We wanted the strength of 2×8 engineered wood joists, but it had to be retro fitted, so we took new 2×4 and stacked them on top of the existing 2x4s to make a 2×8. Then we cut 2×8 strips of OSB and glued/screwed them to either side of our newly enlarged joists. Brilliant! 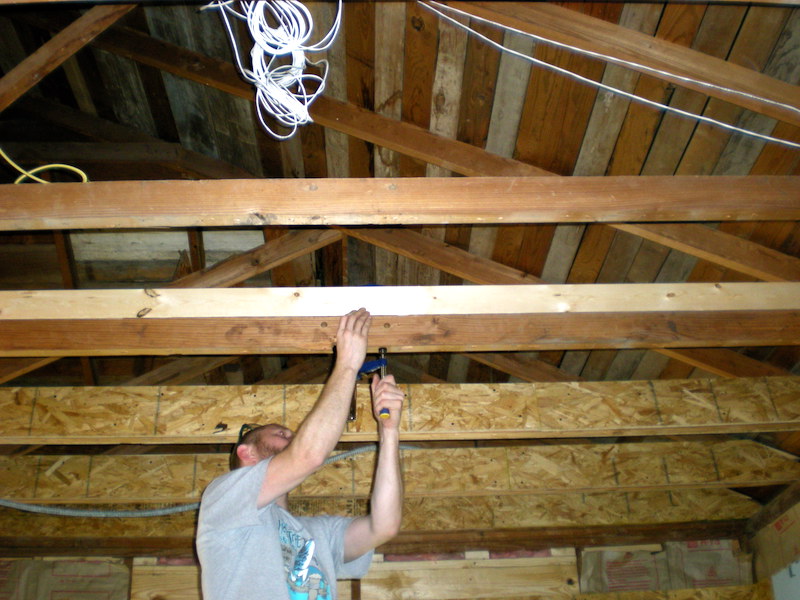 Awesome, I must say this ceiling makes me so happy and proud. 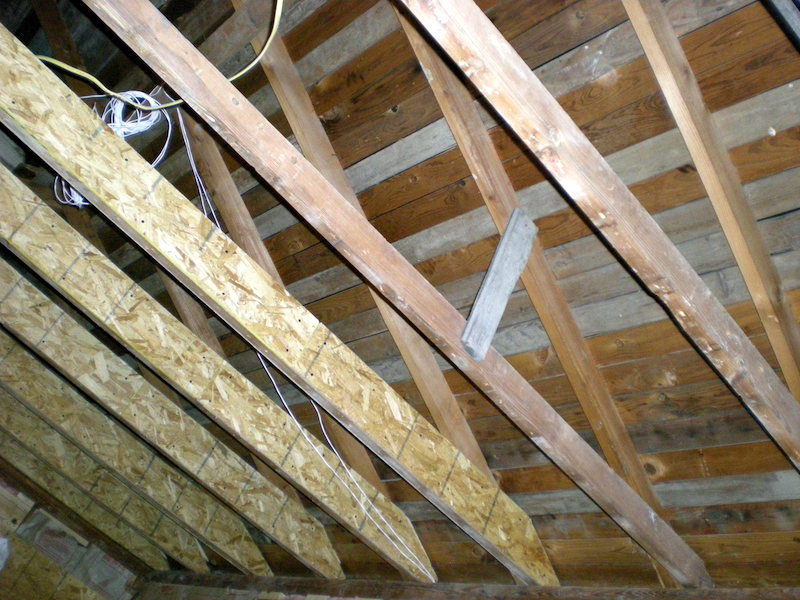 Once the joists were complete, Errek crawled back up into the attic to build a “knee wall” to support the roof (a roof which had miraculously never been supported before). Then back down into the room we hung OSB sheets to further strengthen and straighten the house, and (most importantly) enclose the space once and for all. 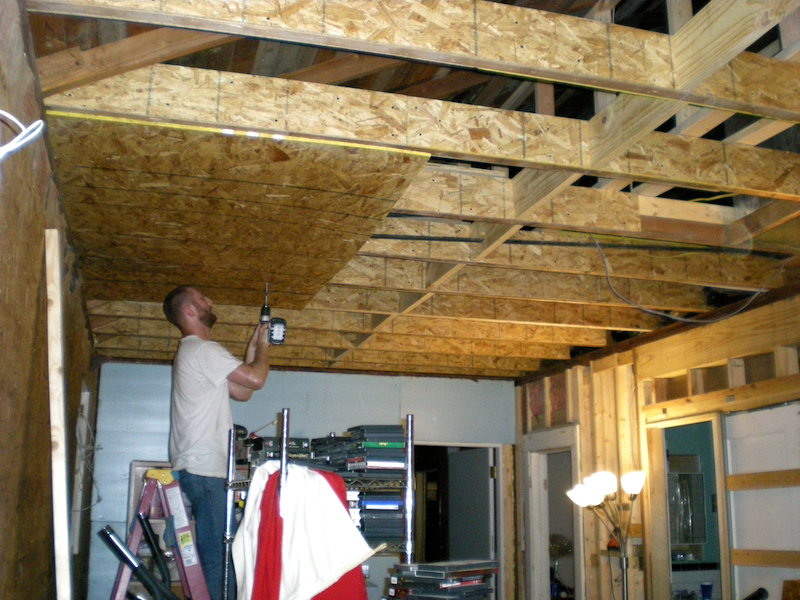 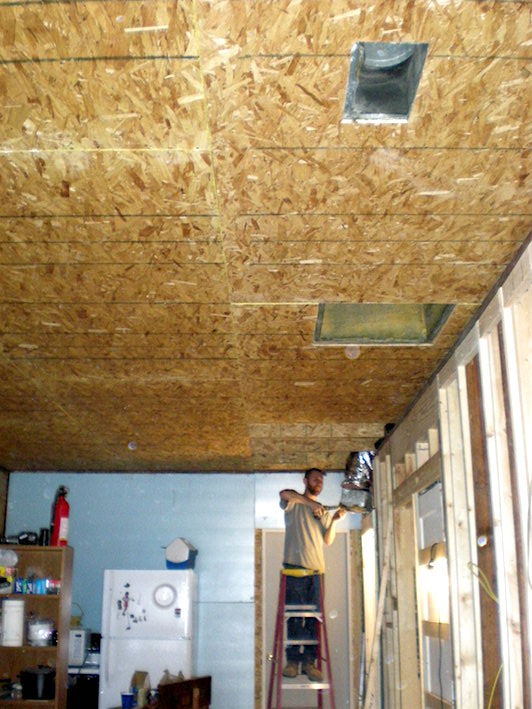 Finally we lined the wall and ceiling with rigid foam. It’s only got an R value of 4, but it seems to really help a lot. Still need to put that stuff on the front wall. *sigh* 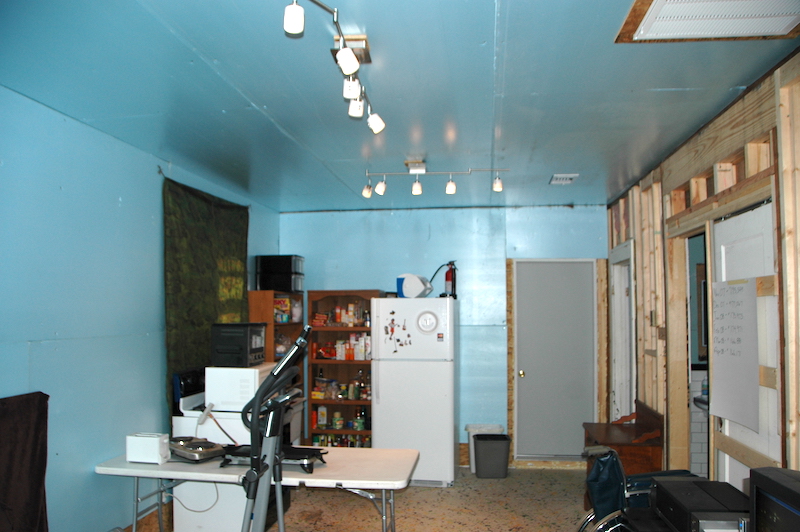 Now, this is by no means a “finished” room. We still plan to finish out the sub floor, then we’ll be able to put drywall on the walls. Also, the ceiling will someday look very cool with original wood and a neat artistic touch. Also, someday when we refinish the outside we’re going to fill the wall cavities with spray insulation for an exceptionally green structure, but for now this is a vast improvement. We’re already noticing that our AC is not having to work as hard as before. Yay!

Also, in the near future we’re going to temporarily plumb a kitchen sink. We’ve got the sink and the faucet, just no water… YET! 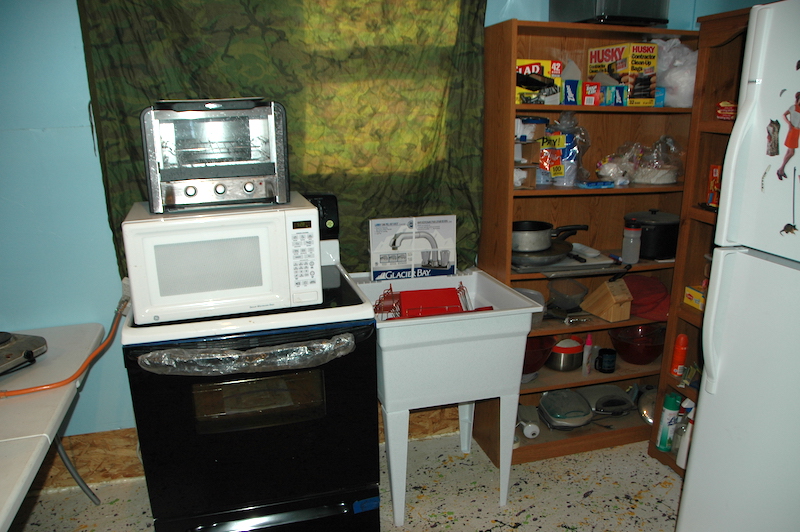 But wait, not done yet, our front porch was being a real drag. Time to level it up.