It’s a miracle I remember anything considering all the jelloshots, but I have this very specific memory from a party we hosted back in October 2007 party of some girl say to her boyfriend, “I don’t like this house, there are too many steps.” Well, part of me (the jelloshot part, probably) really wanted to sock her in the mouth for not only crashing our party but then having the gall to dis our dreamhouse, but the rest of me knew that she was right. There were entirely too many steps, and it was completely unintentional. See, when we bought this place there were no subfloors. None. It was hardwoods nailed directly to the joists. Can you say brrrrrrr? Anyway, as we finished out rooms we laid the subfloor on a little thick, creating in some places a three inch differential between rooms. The issue was that we’d built these three inch tall floors in every room except for the big bad living room. And that was just creating far too many steps for our whiney little party crasher to navigate. Poor baby. But I digress…

It was time to build up the living room floor.

The only problem was that finishing out the floor in a living room full of furniture, well, that’s a HUGE pain in the ass. Pro tip that we learned the hard way eventually: get those little furniture moving sliding disk thingies. Handy!

Sadly, adding more floors means having to cover up our lovely Pollack floors. Oh well. Honestly, it was getting annoying that every time we dropped something on the floor, we’d have to get on our hands and knees to feel for it because everything faded into that splatter-paint camouflage. But I digress…again…

Where was I? Oh yes, beefing up sub-floor step one: we had to level the floor…again. What is with this east Austin clay? Pretty sure our neighborhood is migrating south. Either that or Errek is an insane perfectionist who can’t sleep at night if the twenty-seven foot room is a quarter inch off from one end to the other. Anyway, we were all up under the house jacking it up and down all over again. Annoyingly, when we jacked up the back corners it lifted the center of the room off the center pier, forcing us to find new and unusual ways to smush the floor back down. 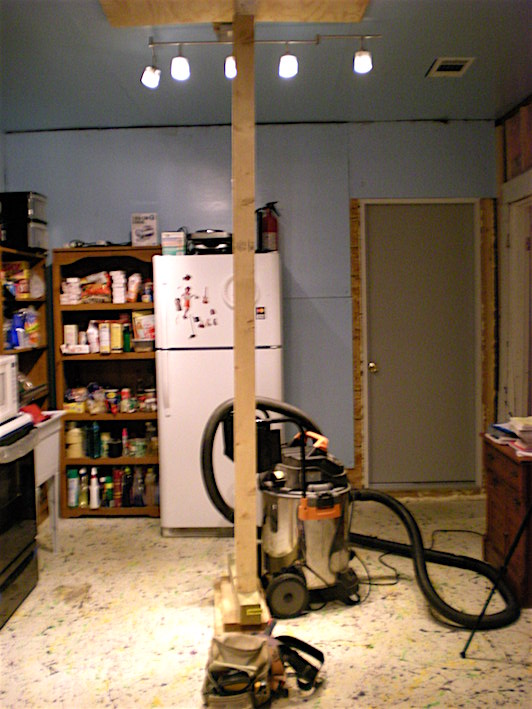 Once that was done we poured self-leveler all over the room to even out any dips and gaps. BTW, did we mention that the room is freakin’ big? 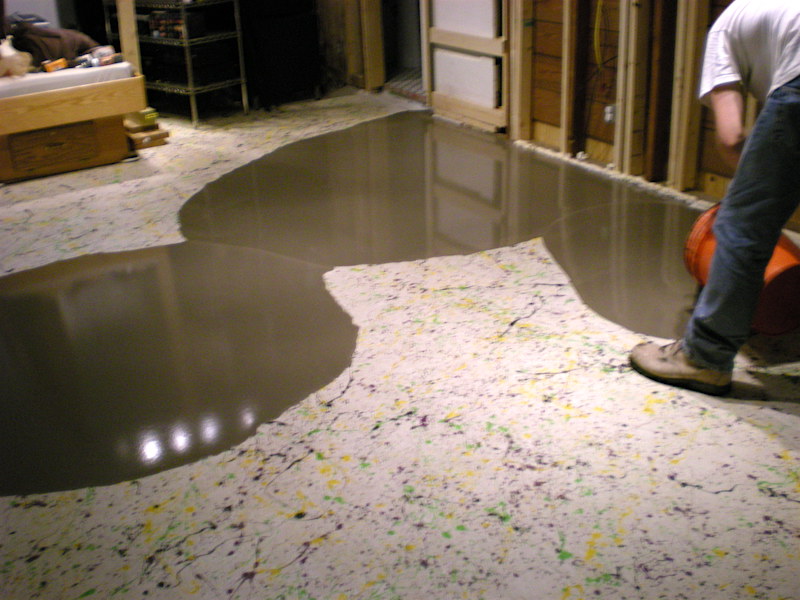 As we mentioned before, the room was full of furniture so we’d have to move all the furniture from one part of room to the other over and over…and over again.

Over the self-leveler we put a layer of rigid foam down for insulation. The foam would also give and take a little, assisting in flattening out any inconsistencies and bulges. 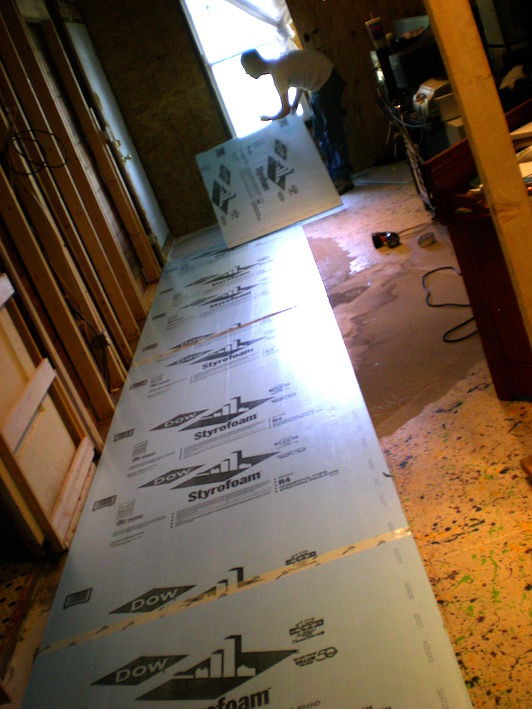 Then we put the OSB down. Eventually when we reinstall the original hardwoods, the OSB under the plywood will be additional material to nail through. Also it will help keep the house from moving and shifting, thus saving us from having to level it again and again to infinity. 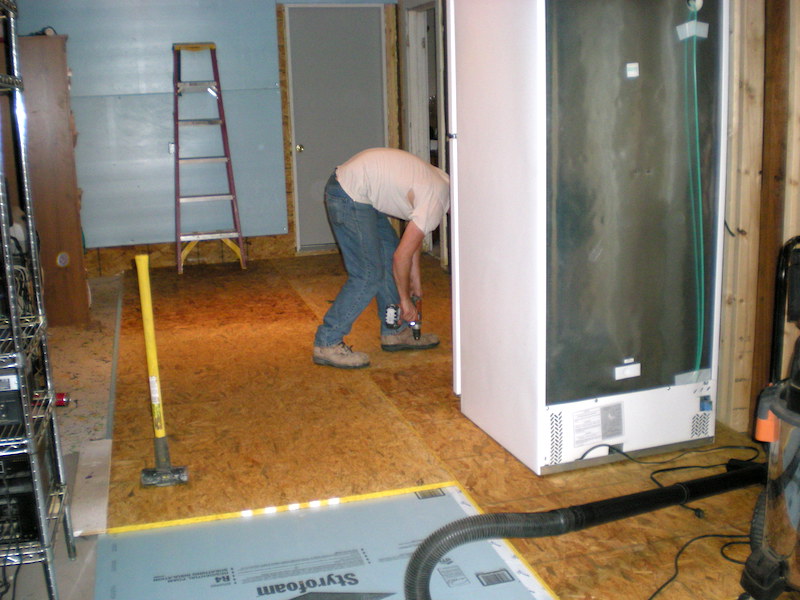 Last layer was the plywood. 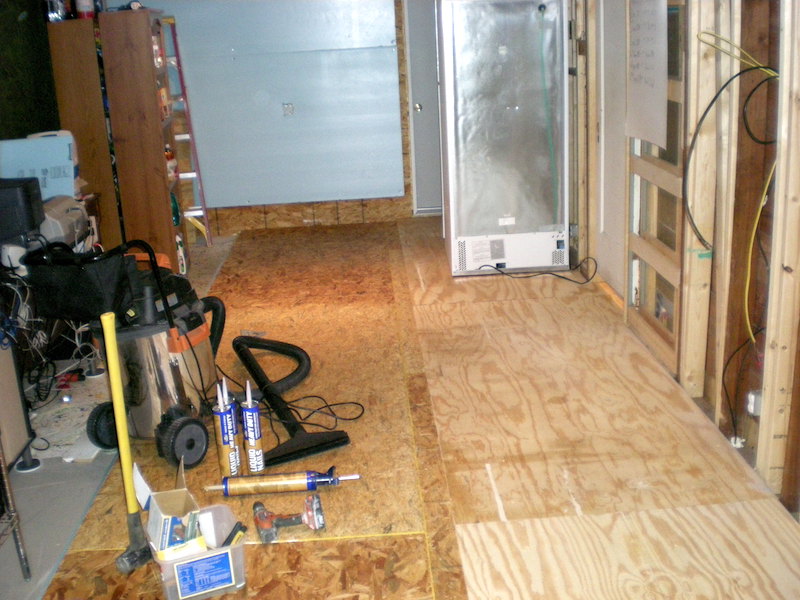 Hooray, look at that seamless transition from the living room to the bedroom. Our jigsaw pieces fit and this place was starting to feel like an honest-to-god grown up house. 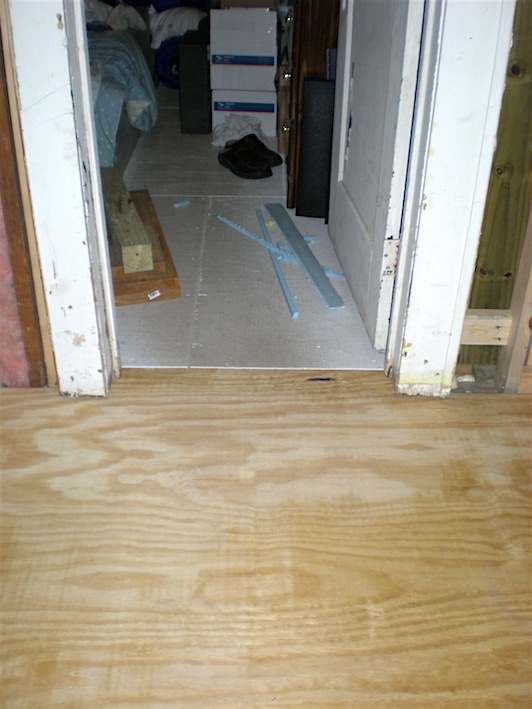 And now we move the furniture to the finished part of the room and do it all over again on the opposite side. 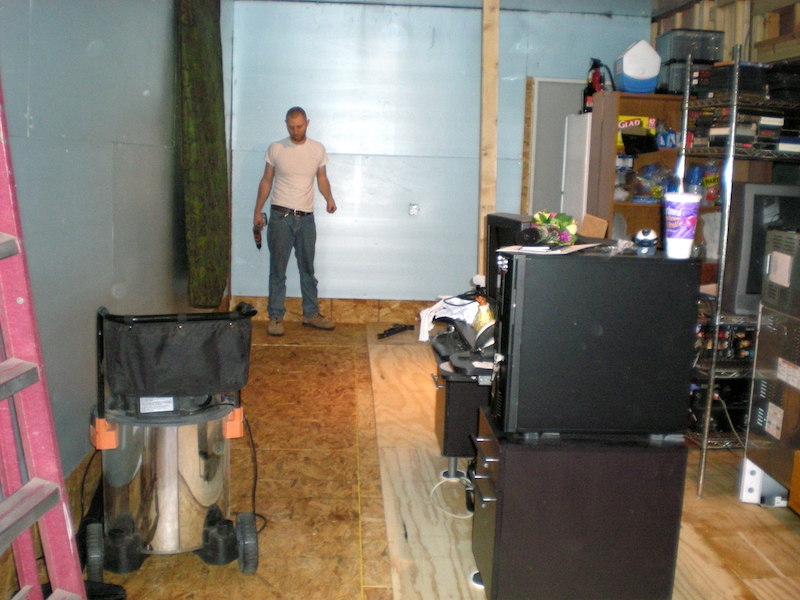 With the floor done and the furniture out of the way, it was time to tackle the drywall on the exterior walls. This would finish these walls with the exception of the windows, which we left space for. Wow, a real (sub) floor and real walls? Am I dreaming? 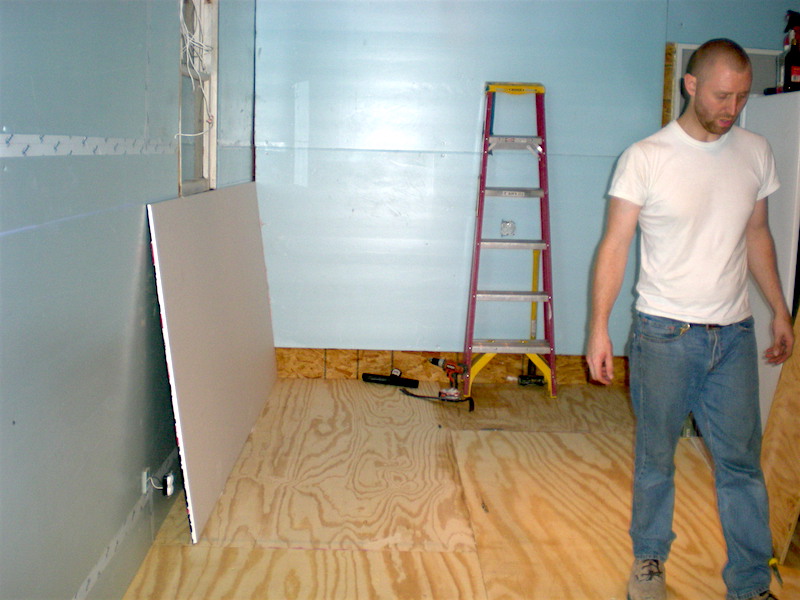 Our plan is to pop out the little kitchen window and replace it with a full sized window, so we cut the drywall to fit our future window. 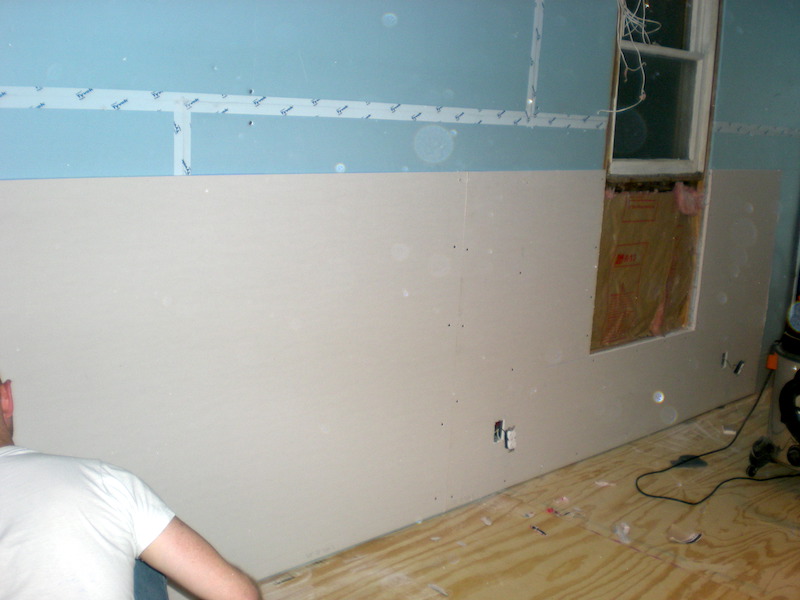 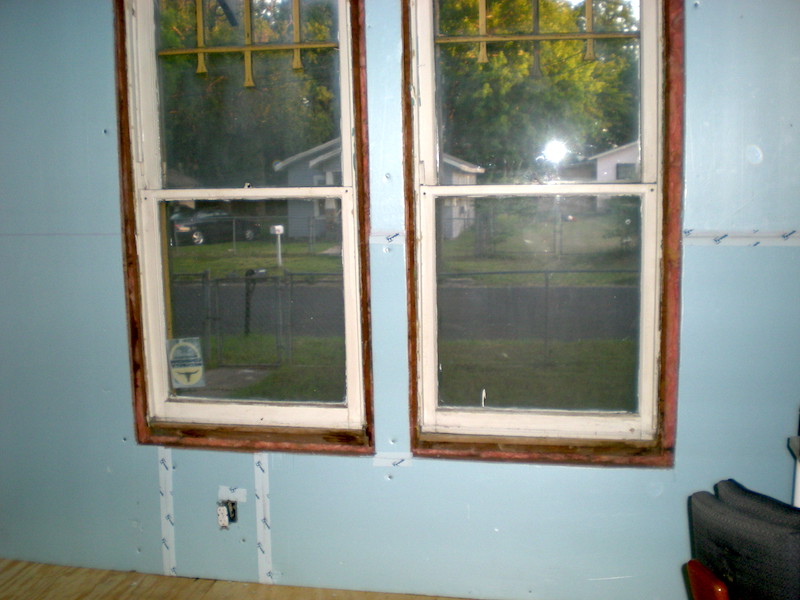 Did I mention that we moved the furniture a lot? Bathroom, say hello to our kitchen, kitchen meet the bathroom. 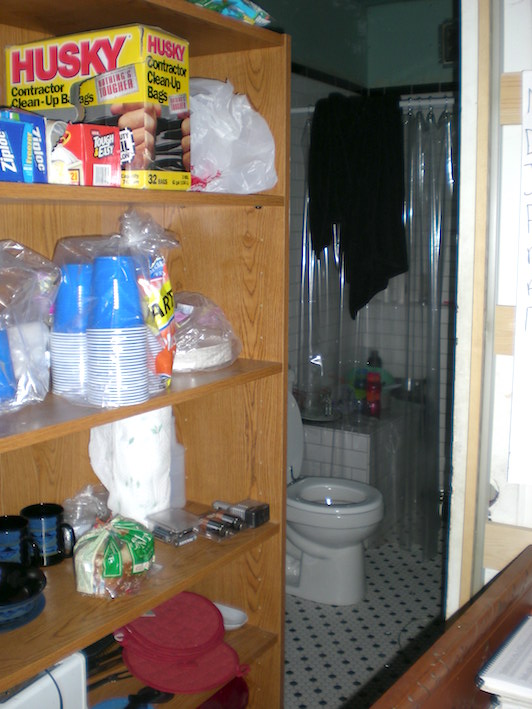 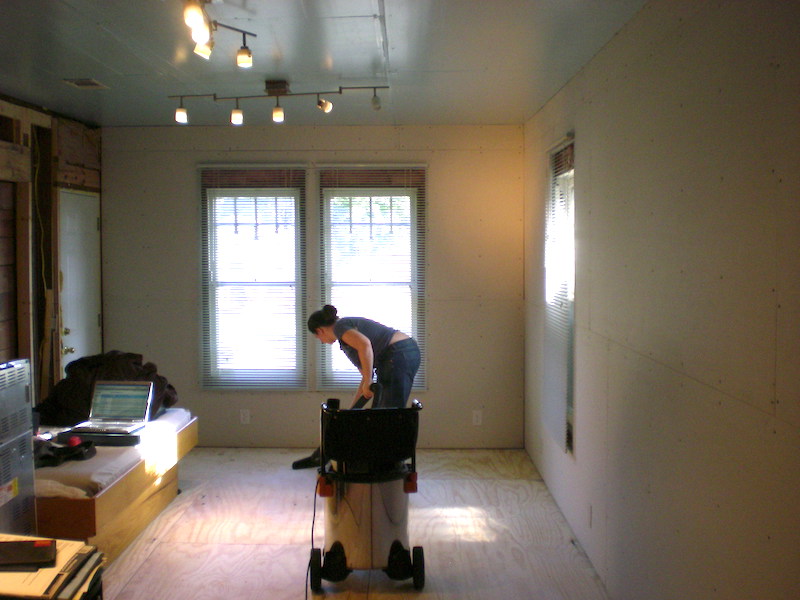 Last but not least, we slathered primer paint all over the plywood subfloor so as to not get splinters in our toes (a small but important details). 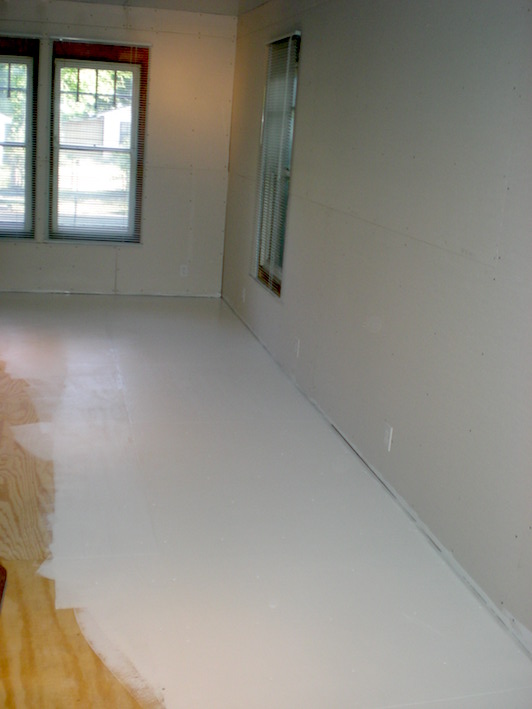 Taking a much needed break to watch the election coverage over our stove. 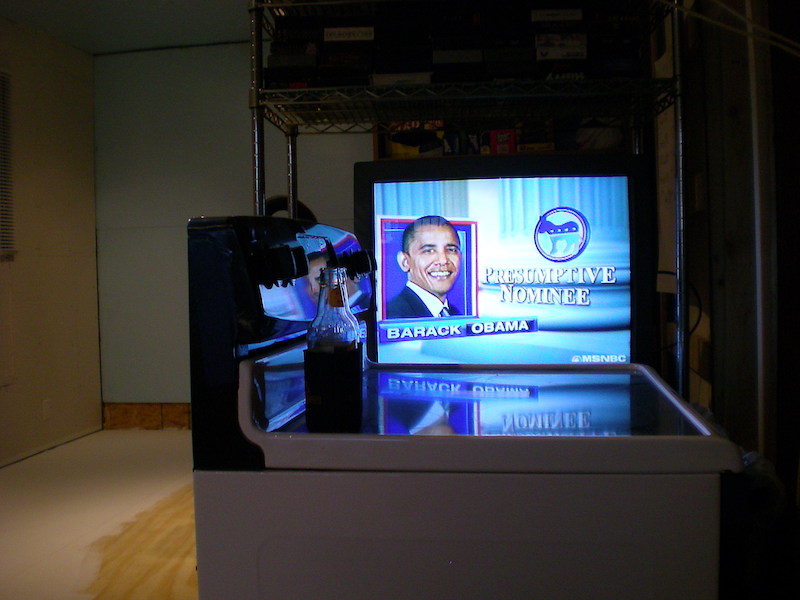 While we had the living room dissected, we decided to make our temporary kitchen a little bit more permanent with a utility sink. 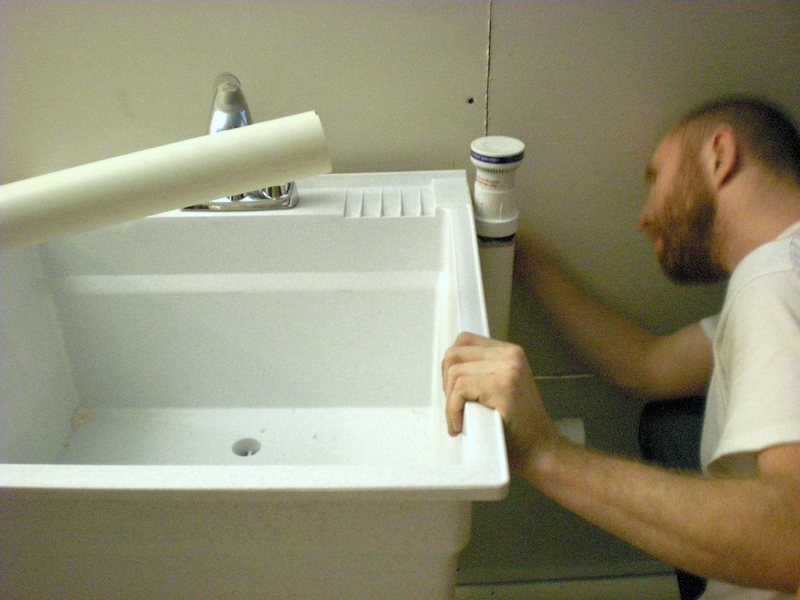 So Errek plumbed some pipes. 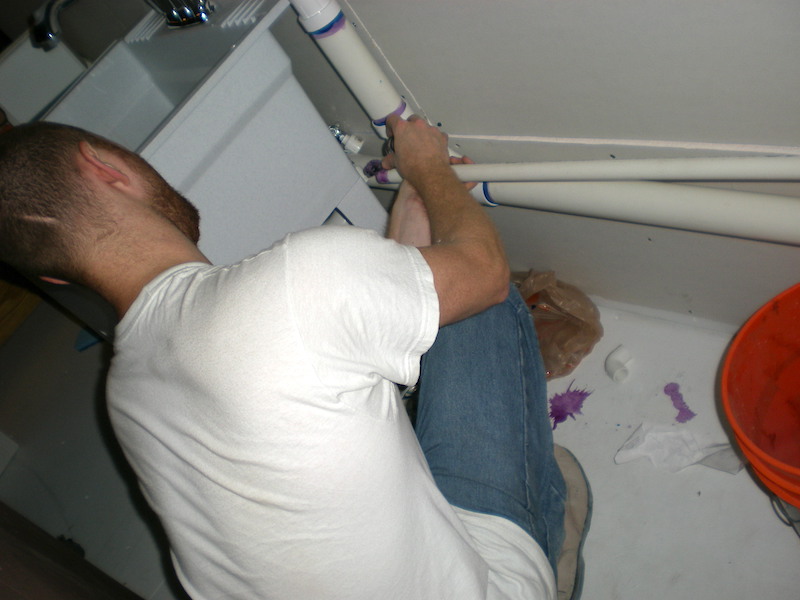 And I helped! My job (as usual) was to suck. 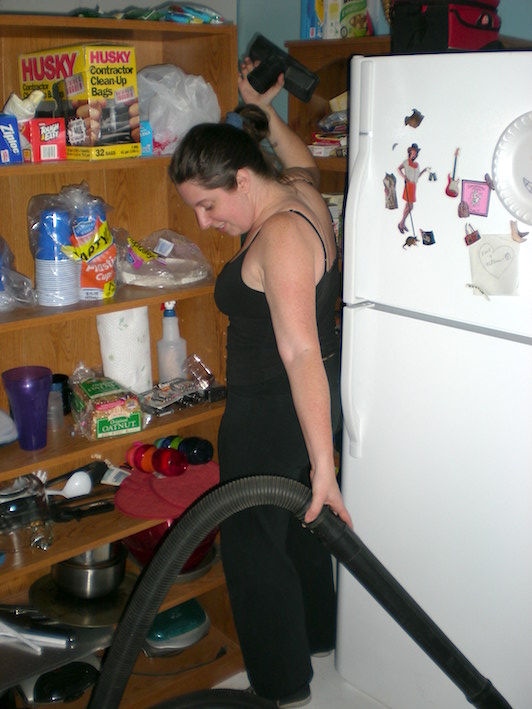