Chapter 26: Oh my Gosh, so Many Bathroom Updates I Needed Two Pages

Okay, so we have silky smooth finished walls, but it’s all for not if the doorway is a ratty mess. Right? Right. Obviously, it was time for some woodworking. Of course, in the usual tradition of PVR, this was not a simple matter. See, in case you hadn’t noticed, Errek and I are picky perfectionists. After all the blood, sweat, and tile we’d put into that bathroom, we were definitely not going to settle for some off the shelf Home Depot hollow core door and molded trim.

Fortunately, Errek knows his way around a router, table saw, and chop saw, so we were armed with the knowledge and skill we needed to make truly awesome woodwork. Of course, we had none of those things, so we had to buy said table saw, chop saw, and router. This was proving to be an expensive project and we hadn’t even bought any wood yet.

So, once we owned more saws than we had room for, it was time for the raw materials. First, we ordered a shiny new door for our bathroom. It was pretty damn perfect, and didn’t echo when you knocked on it, but it needed some paint. Errek made these handy door painting holders and we propped it up in the living room for a few days while we worked up the enthusiasm to prime and paint it. 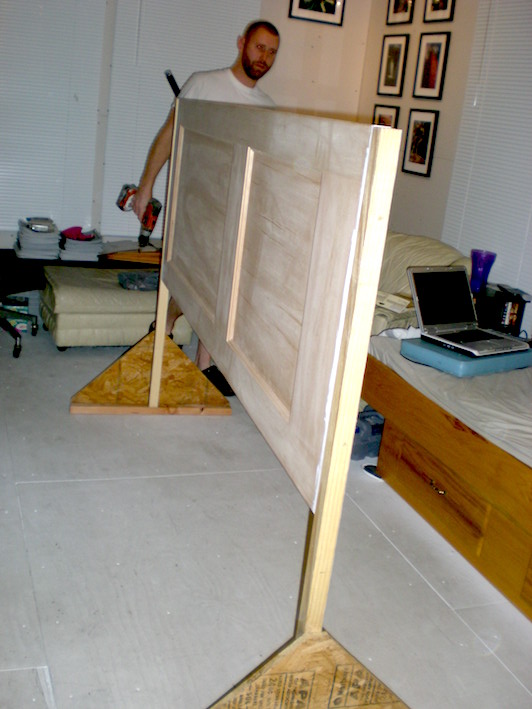 Then we primed and painted it. 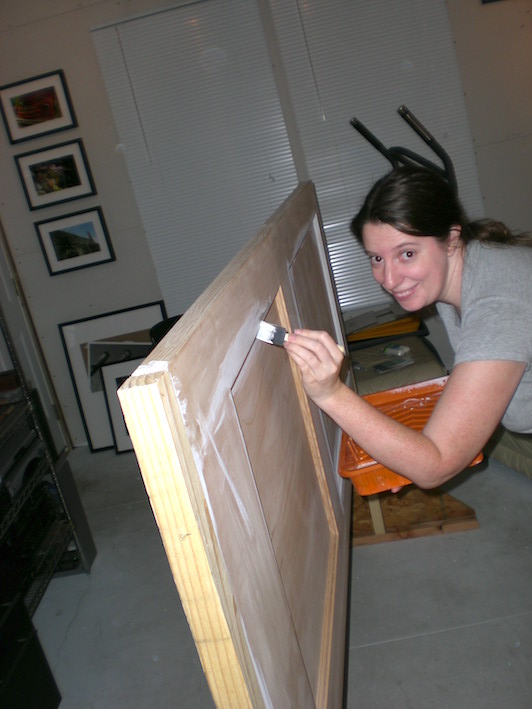 But see, that pesky perfectionism popped up again. We don’t want to feel any texture on our woodwork. We want it to feel like it grew on the tree all sanded and painted and perfect. So Errek decided to teach the door a lesson, torturing it with paint stripper and a scrub brush. 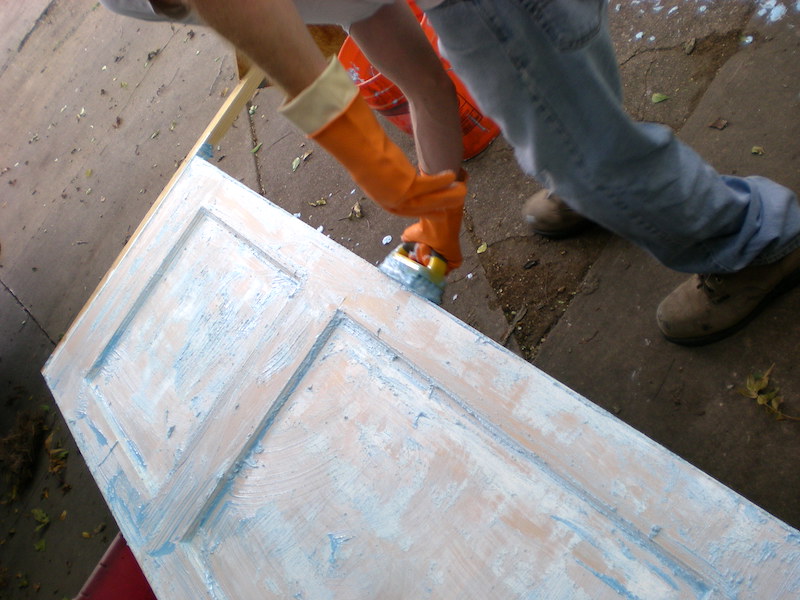 Okay, time for a do over, and this time with a rather expensive new paint sprayer. This is turning into a very expensive project. 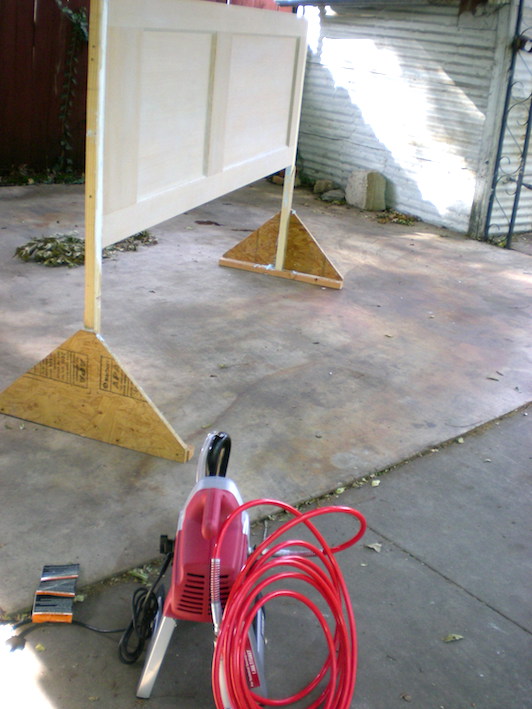 Boys and their toys. 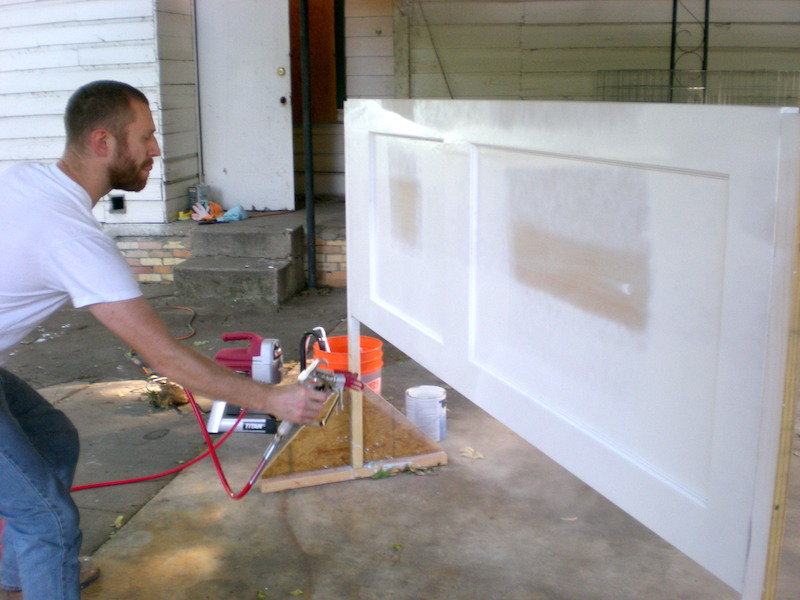 Note to self, stand further away or up wind next time. 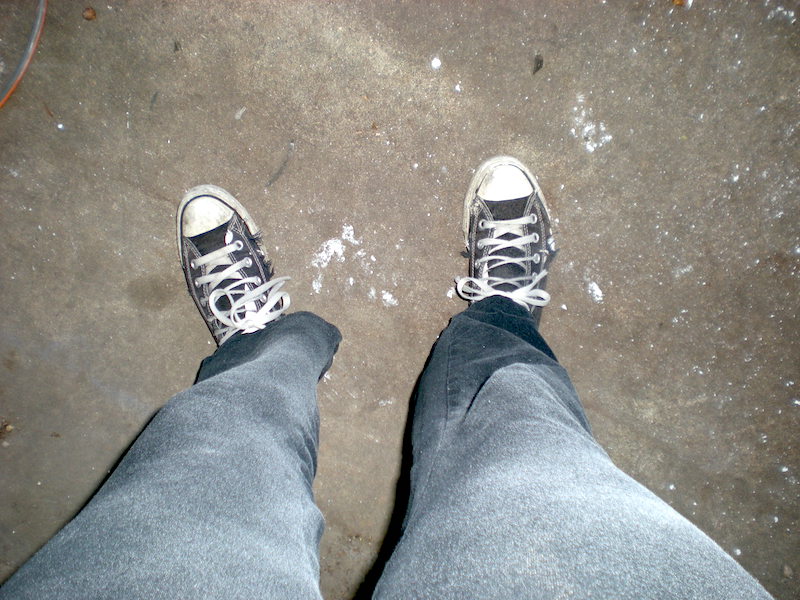 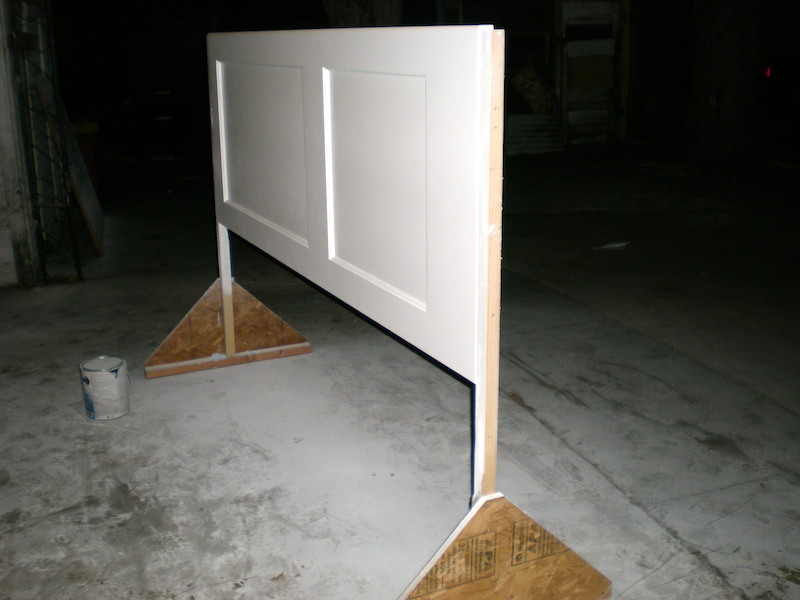 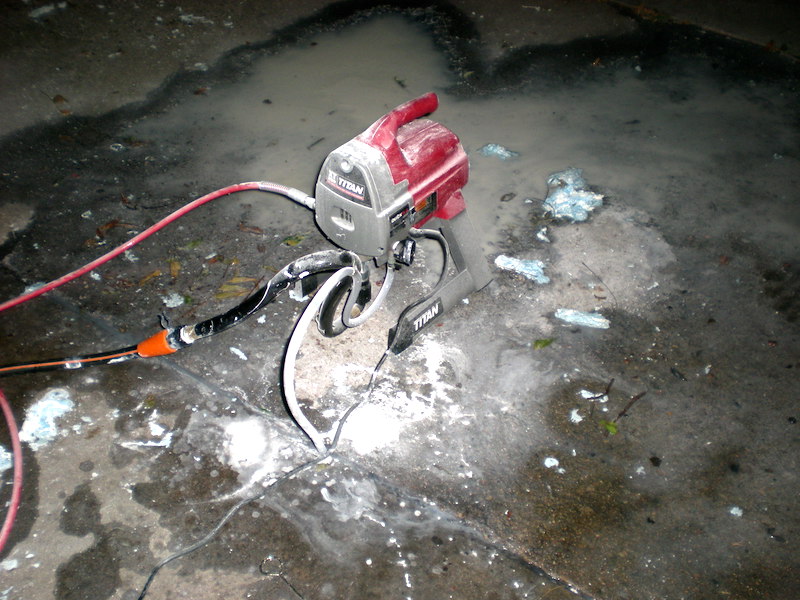 Now, time to put the door handle on. Since we went with a pocket door for this room, we needed a pocket door pull and latch. Duh. But the ones at Home Depot were, well, crappy. Also, we wanted to go older with our doorknob style throughout the house, so we had to be sure that it would all match once we eventually got our other doors and knobs.

We found this great site called House of Antique Hardware, where we found some super cool old style doorknobs. After putting far too much thought into it, we decided we really liked the Lorraine collection of knobs in oil-rubbed bronze.

Anyway, long story short, with this master plan in mind, we found an oil-rubbed bronze pocket door pull for the bathroom. 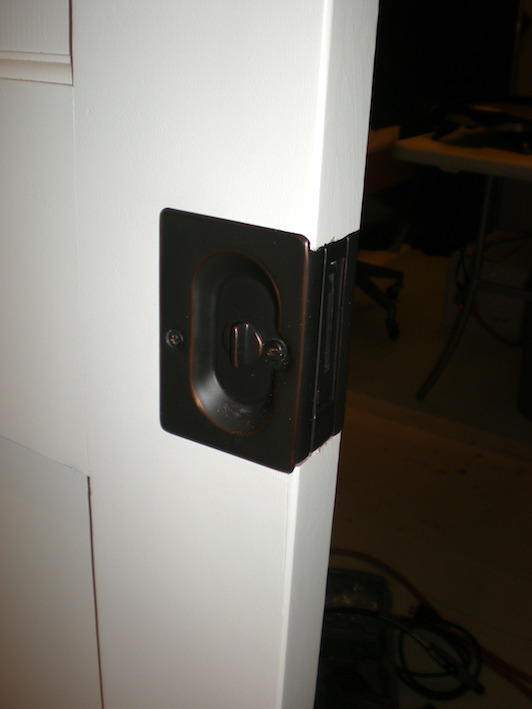 Time to install the new door. Oh no, not another saw. 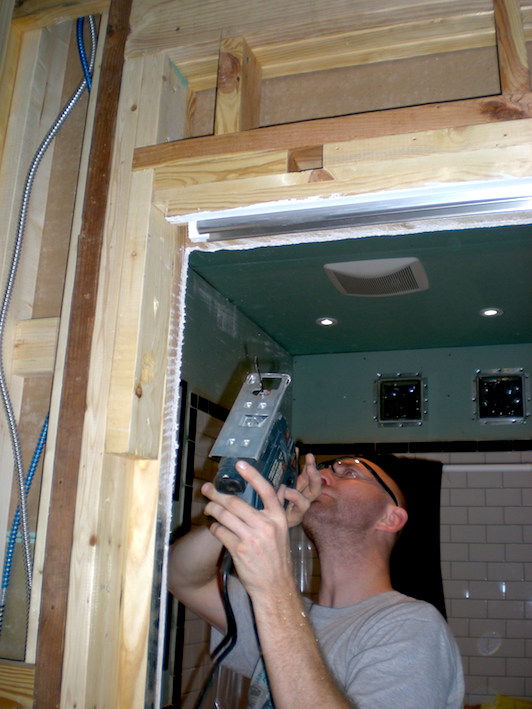 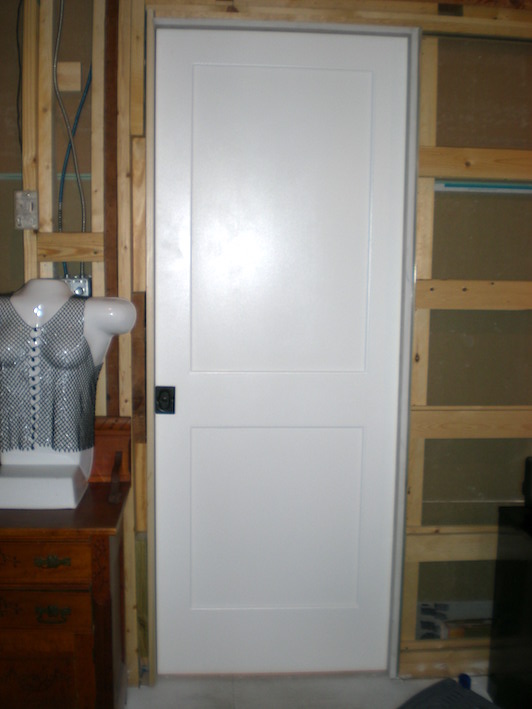 Next, we were ready to frame in the door with some fancy woodwork. But remember, we’re minimalists and going with an older bungalow style for the house, so we looked at hundreds of photos, watches a few period films, and finally came up with the design we wanted. It was, again, not going to be the standard molding you buy by the foot at Home Depot. Nope, we made it from scratch with Poplar. And when I say “we,” I mean Errek. 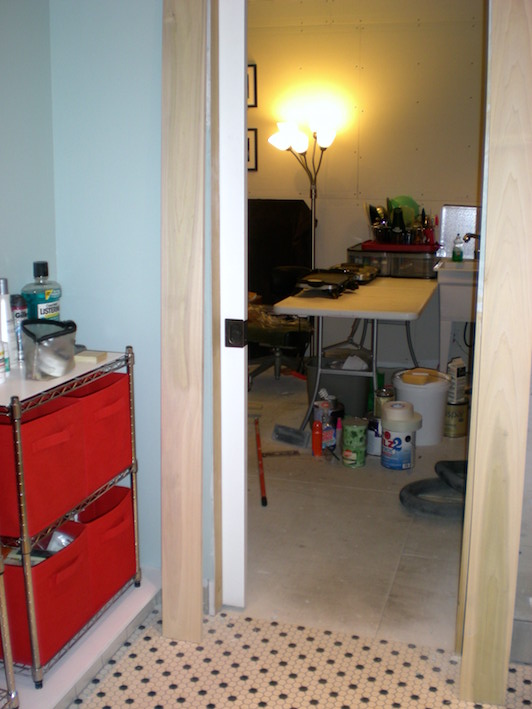 Second, a round over. A little sweatier, but Errek was up for it. 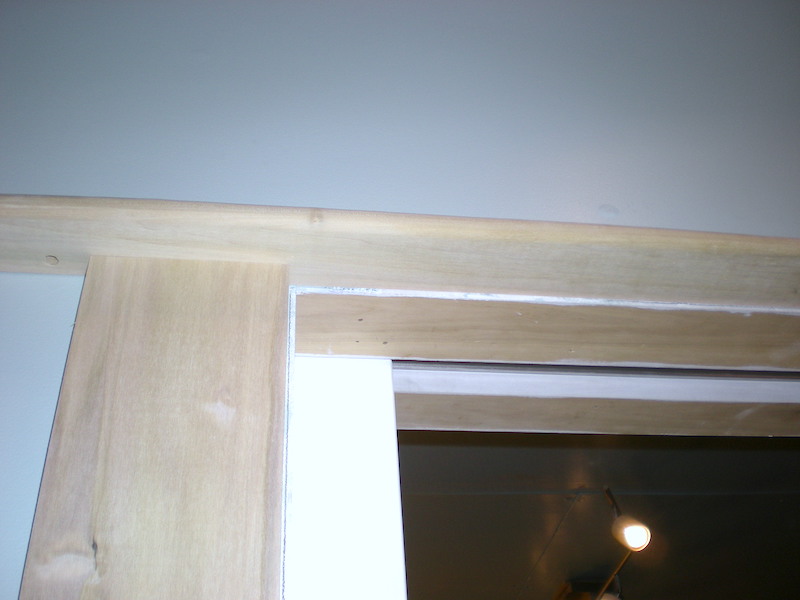 Next was a 5 inch horizontal board to go over the round over. However, we wanted this to be a bit thicker than the two verticals, so Errek glued two planks together and then trimmed it to size on the table saw. Safety note, the saw was not on when he was mugging for this photo. 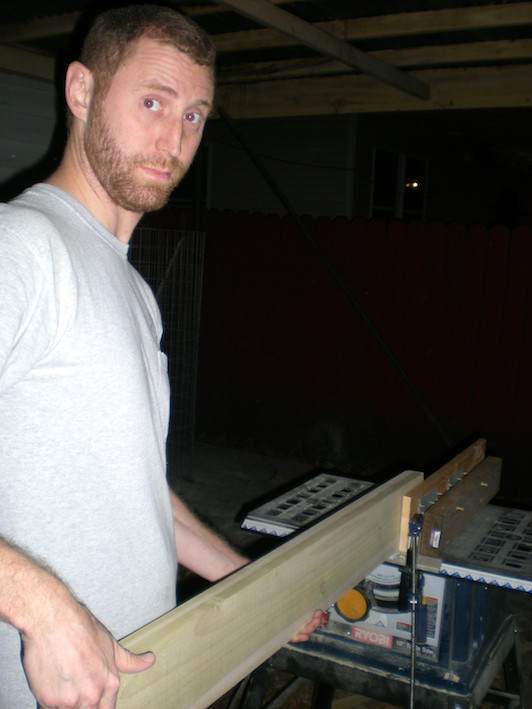 Finally came the crown, made from a cove and a small block of wood. It’s pretty, no? 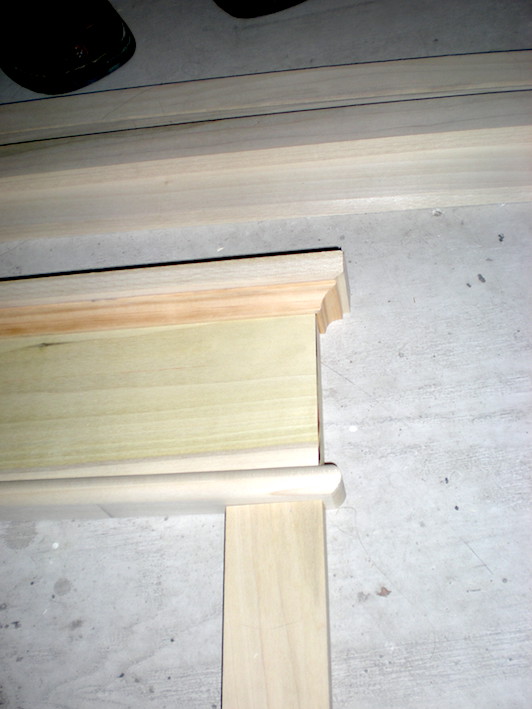 Now, time to put it on the wall. 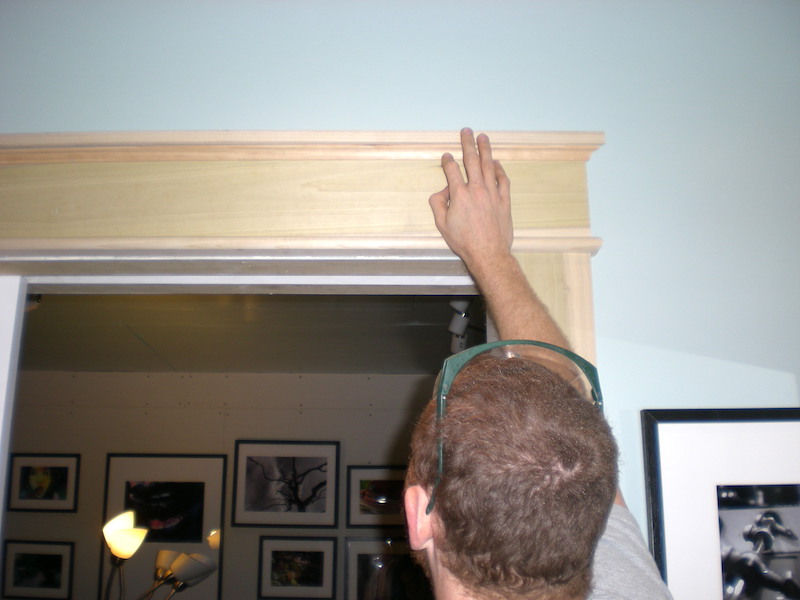 Then came the dreaded news, we needed to buy yet another tool — a nail gun and really, really…really loud compressor. The good news was that our Home Depot was moving and they had an “Everything Must Go, 30-50% Off Sale” so we saved a little money on this and some of the many saws. 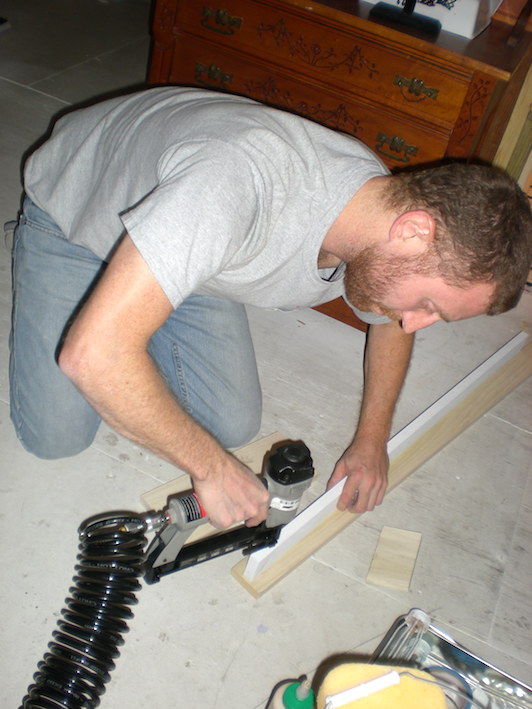 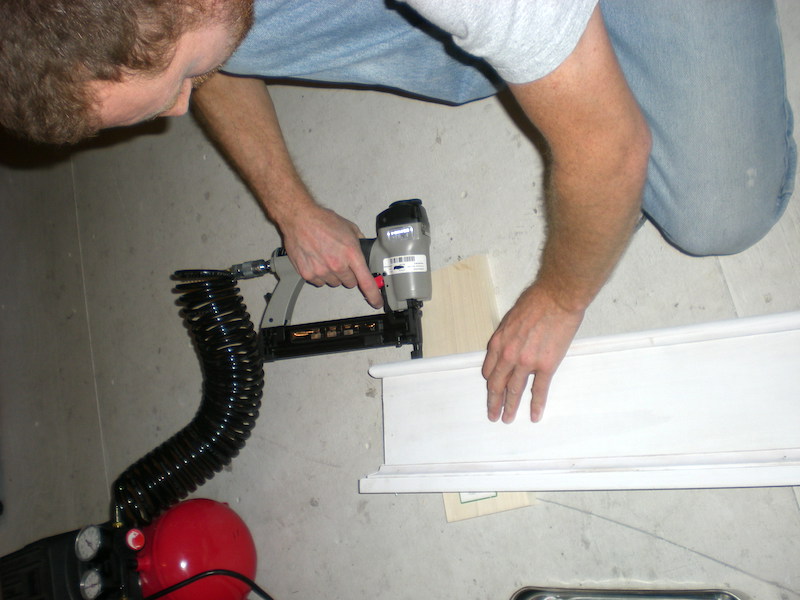 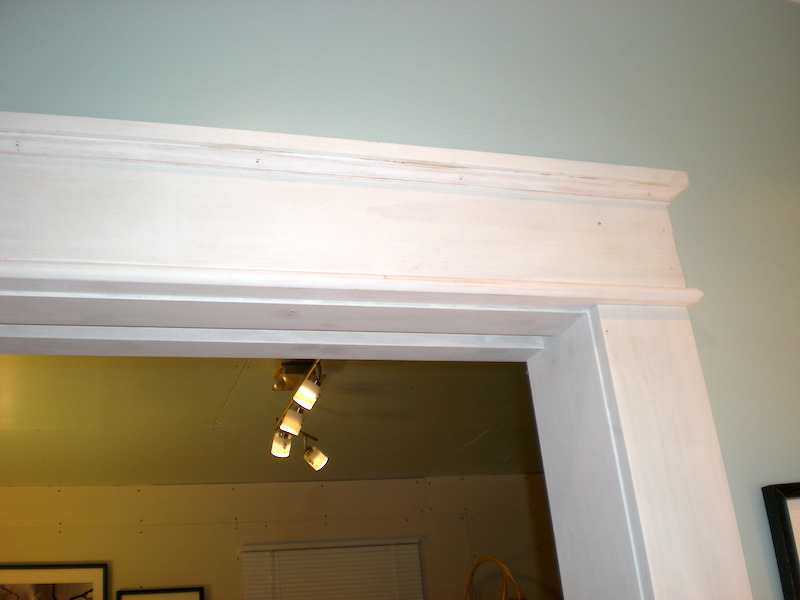 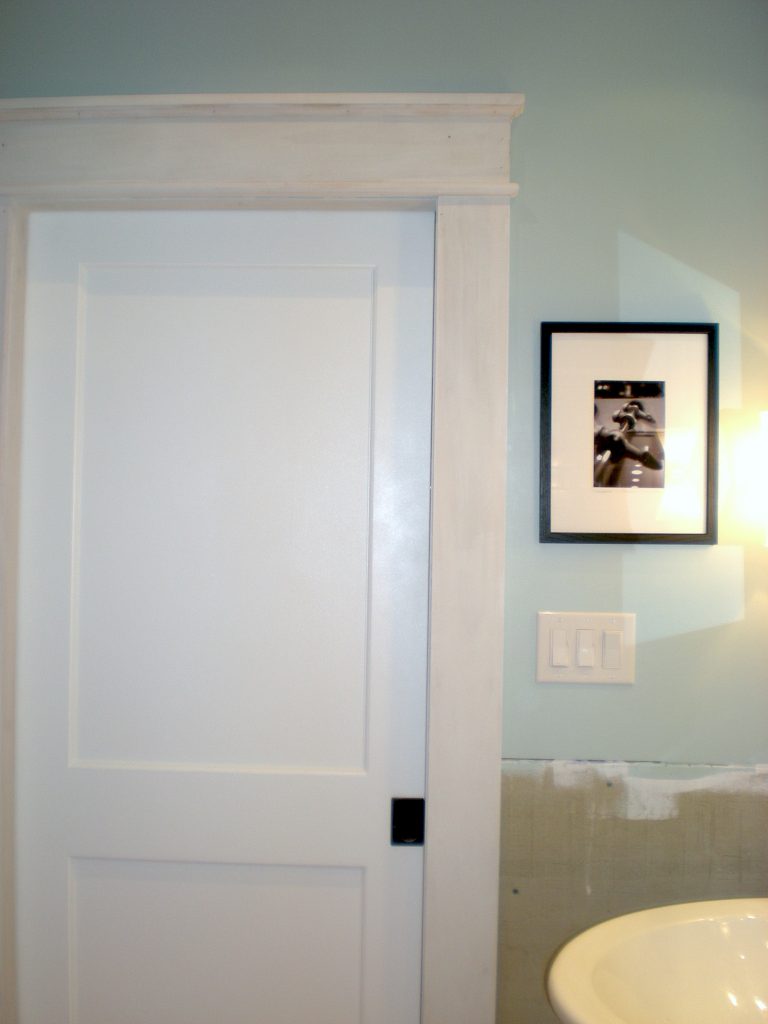 Puttied over the nails. 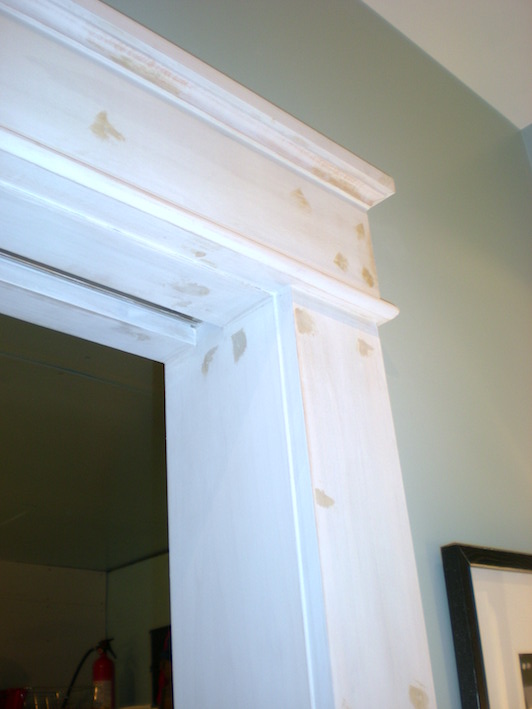 We’ve since primed it, but still need to put a final coat of gloss enamel on it. Also, I forgot to mention, we’re still not happy with the door paint job and plan to sand it and re-paint it. But those are little details, the point is that with each of these pages, we’re getting a prettier, more complete bathroom.

But wait, we’re not done yet. Dude, is that…Chrome?