When last I left you, dear reader, we were in a holding pattern. All was good on our end, but the city was being a butthead in that special, bureaucratic way that only a city can be. Well, all that ended early on New Year’s Eve when the phone rang. It was Rudy, our architect, to tell us that the city arborist had finally signed off on our project which means we had our demolition permit…oh and also ALL the building permits.

First of all, yay, second of all, permits with an “s” as in plural?

Yep, see it turns out that when you are building an addition the city treats it completely different from how they treat new construction. Since we have one of each, we need two sets of everything.

Also, *shudder* they all expire in June 2010. Now, the good news is that when you call in an inspection, it extends the permit expiry date for six months. But we freaked out for about a month, trying to get the city to give us some info on how on Earth we were supposed to make progress on both projects at once. Finally Errek had to take a day off work to go down to the city and ask. Good news! Turns out that when the permits are “linked” progress on one of them renews them all! Hip hip hooray! And there was much rejoicing.

Anyway, back to the story… So we get the call from Rudy and he comes over with all these permits and BOOM, we’re in business. Just like that. 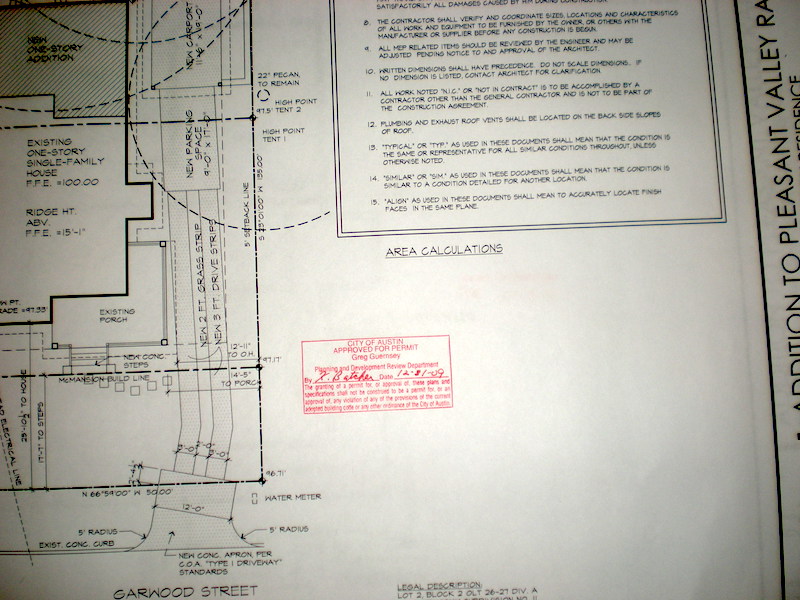 See that stamp, that means that the plans have passed the McMansion Ordinance…aka, they’re cool with everything, even though our spiral staircase sticks out of the “envelope” a wee bit. 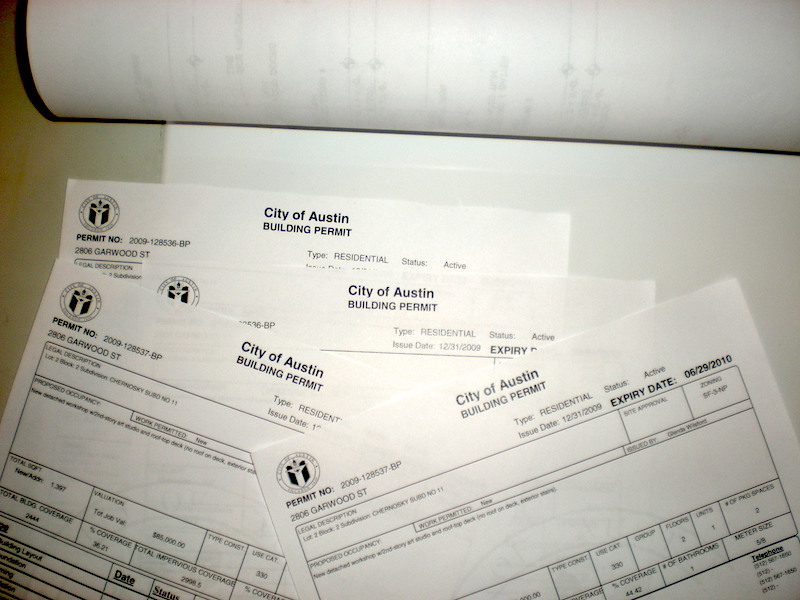 I felt like we’d gotten away with something. Really thought the city would give us more grief over the building permits than the demo permits. Weird. Anyway, I was so excited, that I wanted to make it official by putting the permits in the window, so I put them in a Ziplock freezer bag and scotch taped them to the window. Classy, right? 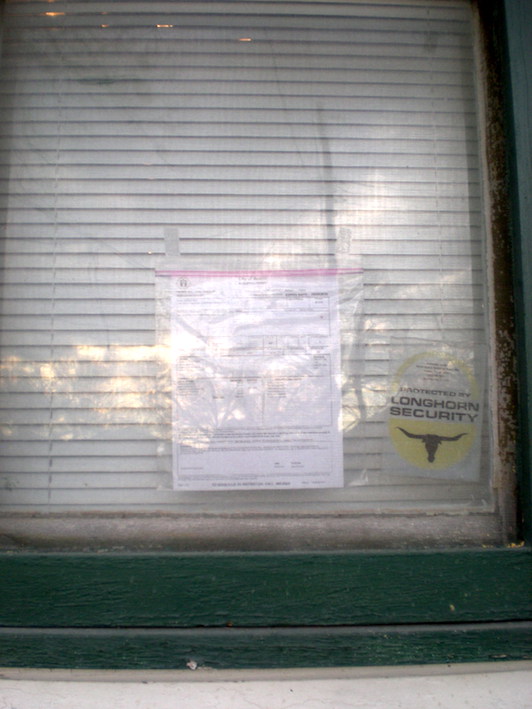 Starting 2010 we’re all legal and ready to tear shit up. You know what this calls for, right? A dumpster! I got on the phone with the dumpster rental peeps and within an hour, BAM! 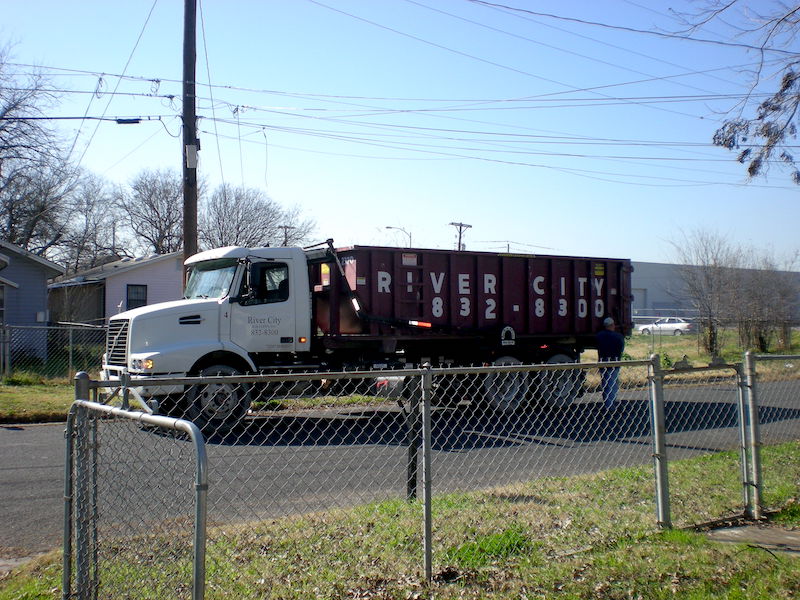 And within 10 minutes he’d dumped the dumpster and was off. Seriously, that guy drove like a champ. Color me impressed. 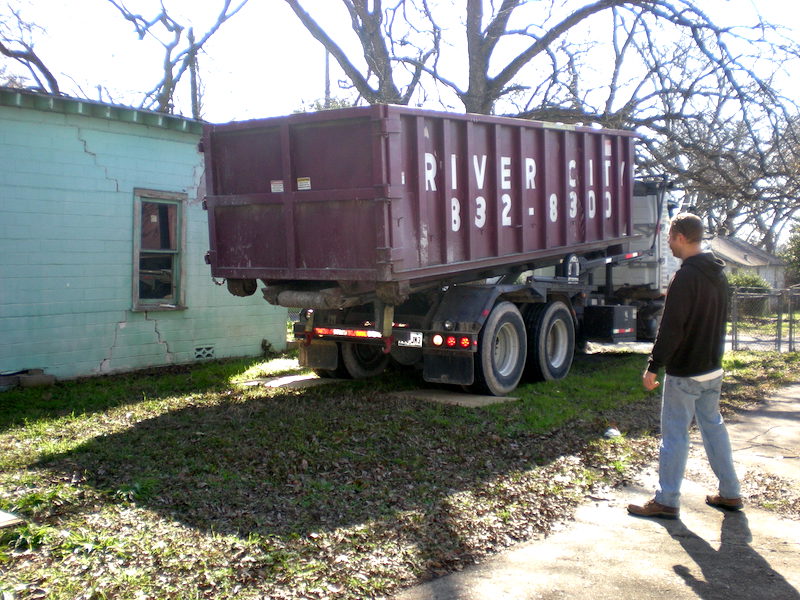 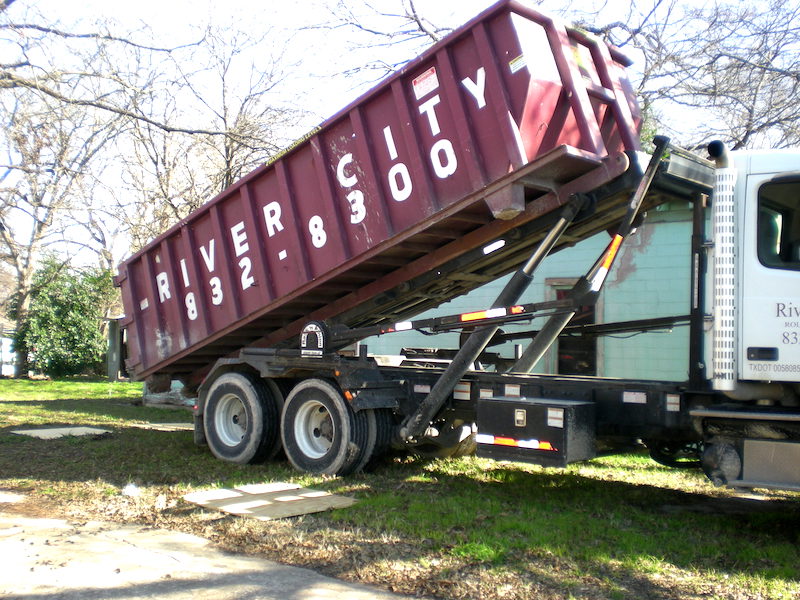 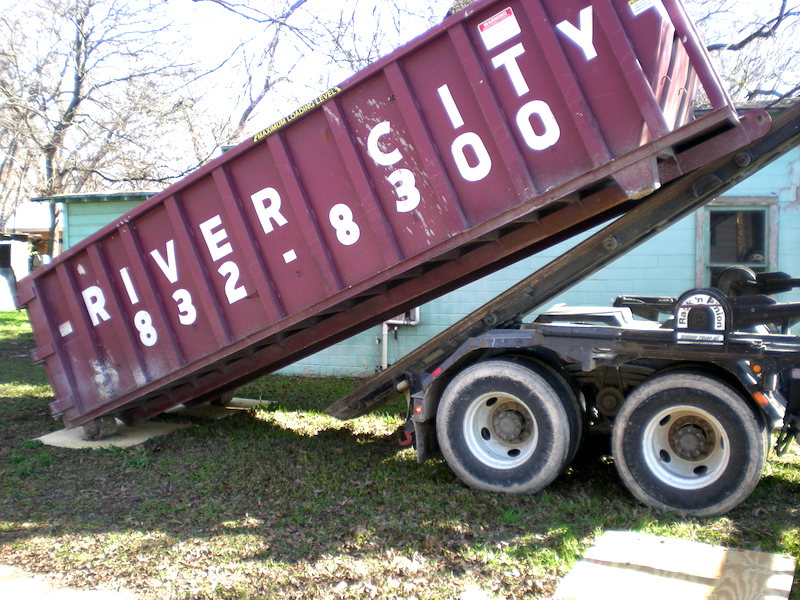 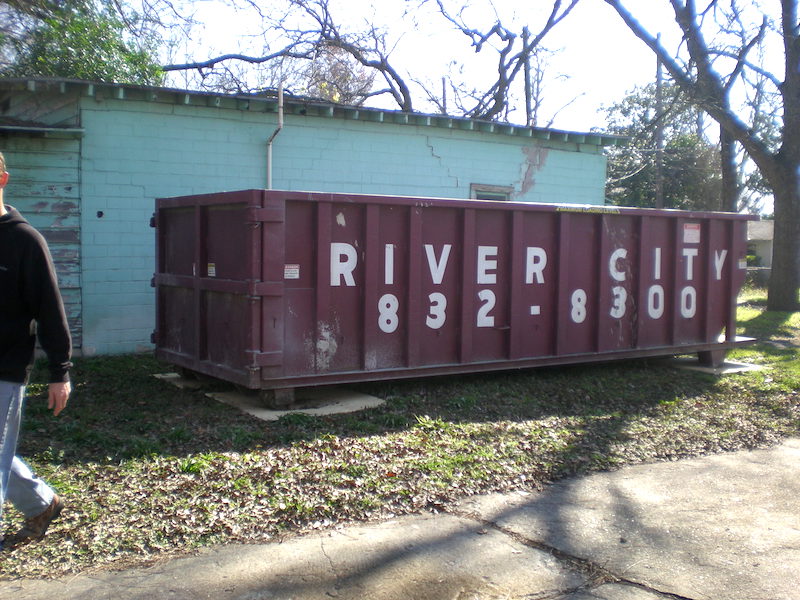 Here’s the view from inside the dumpster…you know, in case you were wondering. 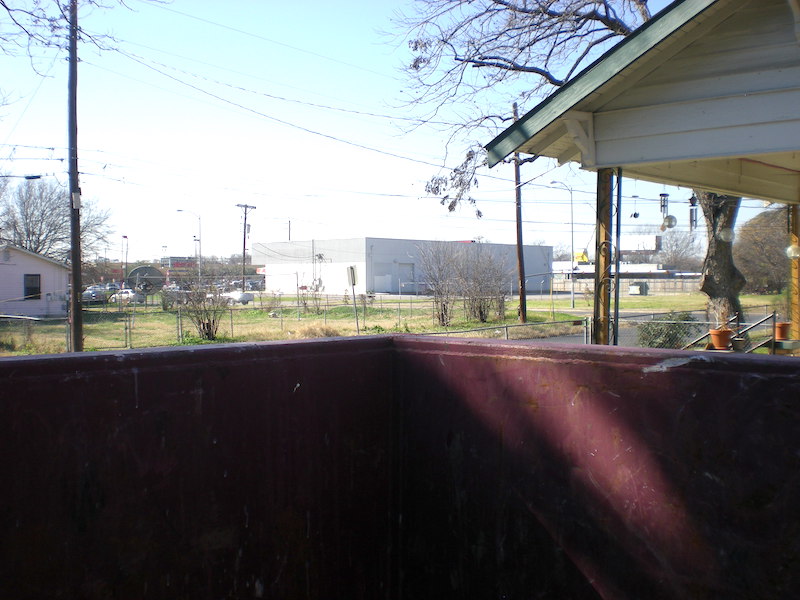 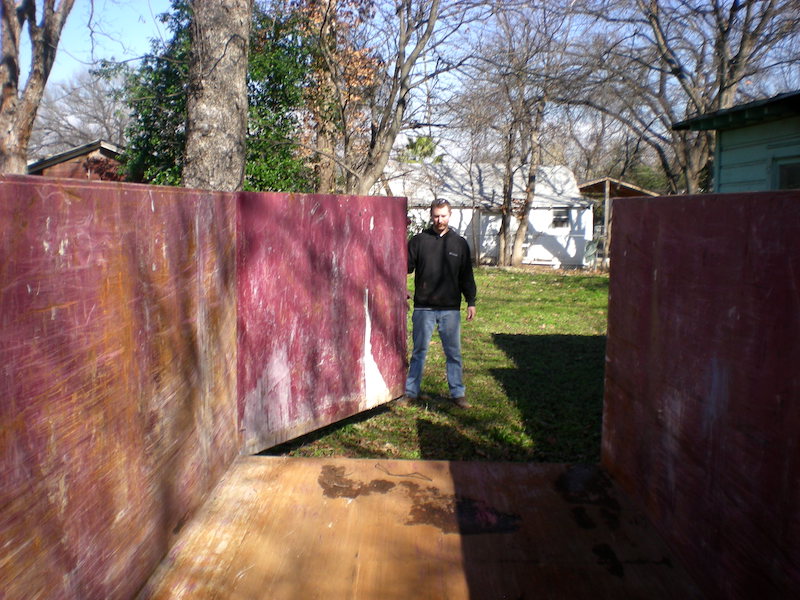 And now, a little tease. Check it out… 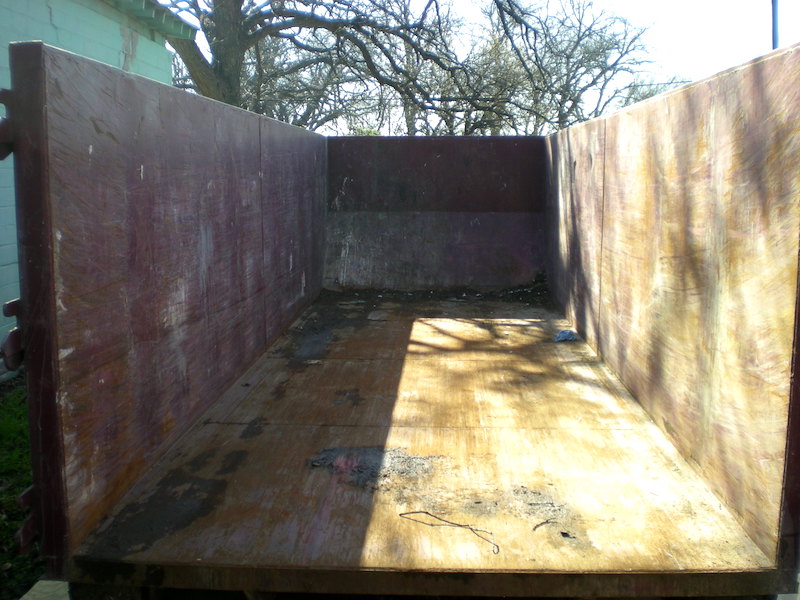 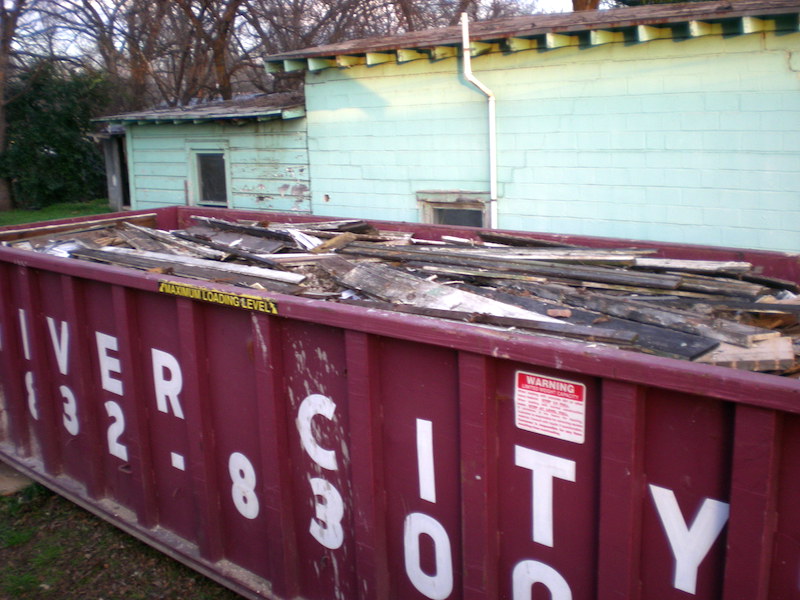 But I’m getting ahead of myself, the best part of demolition isn’t the before and after, it’s the DURING! Am I right or am I right? So let’s tear it up.