Chapter 40: Out with the Old, In with the New…Water Heater

Prepare yourself, gentle read, for these next few updates will be the best PVR updates ever (so far). That’s right — this action packed update includes: loud and heavy machinery, strange wild life, and a busted water main – OH MY! Oh yeah, and a NEW FOUNDATION. Almost forgot. Not!

So pop some popcorn, then sit back and prepare to be dazzled.

So, as you probably already know, we’re remodeling this ole 1946 house and part of the remodeling is to add on about 600 sqft to the original 800, making it a 1400 sqft jewel made out of pure awesome.

But currently, our unpolished diamond in the rough sits atop cinder blocks and rotting wooden beams. 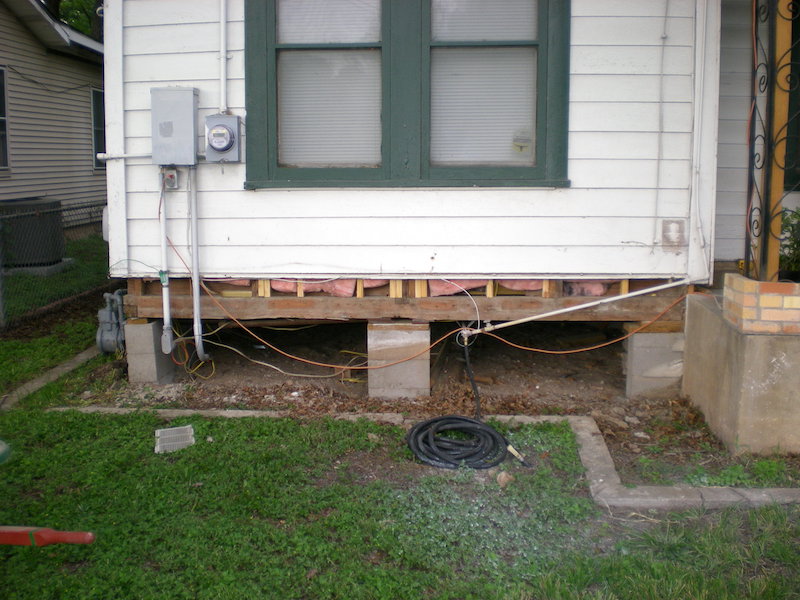 And we all know that if you sit a jewel made out of pure awesome atop cinder blocks and rotting wooden beams, then, as Errek so eloquently puts it, “you’re just polishing a turd.” Since we’re really not into turd polishing (gross!), we decided we had to mount our jewel in a classy setting (yep, totally over using the “jewel” metaphor, but it’s my blog so deal with it). Okay, so actually it was Errek who decided on this new setting, while I was all, “but it’s so expensive! Waaaaaa!” Eventually, though, his steely stubbornness wore down my steely stubbornness and more than one “whatever” was uttered in a scornful tone, but it was decided, we would invest in a top notch foundation.

We had a grand total of five companies (represented by eight dudes) parade through the yard with strange devices and most of them delivered the same tired phrase “well all you really need are some spread footers with 4×6 post beams.” Yeah, so here’s the deal WE DON’T WANT SPREAD FOOTERS OR WOOD BEAMS. Period. We want deep piers and steel beams. PERIOD.

So, yeah, if you could go ahead and give us a quote for that, that’d be great.

Two of the companies completely ignored our requests and returned with estimates for, you guess it, spread footers and wood beams. Guess who didn’t get a call back. One company was talking all fancy and were going to do a thing called “helical” piers but the more we learned about those, the more we decided it was not for us. Also, the estimate was enough to make this strange liquid substance come to Errek’s eyes. It was freaky. Finally there was this one guy we really, really wanted to work with but he just didn’t do the type of foundation we needed. He’s a slab guy, who does do pier and beam and he hearts steel with a passion, but he’s not equipped to do deep piers. Still, if you need a slab fixed, or want to level your pier and beam floors, call Brady Barnett at Superior Foundation Repair. Super cool guy, and we’ll tell you more on why later.

Since the foundation we needed was not up his alley, he never gave us an estimate, instead he gave us a recommendation, All In One Foundation Repair. We gave them a call and out came Robbie. He was cool and listened to me closely, at first he came back with a really high price, but we wore him down and ended up paying almost exactly what we’d budgeted for the project. Also, he kept trying to redesign the plan that Errek came up with, even though Errek’s plan was genius. Finally the engineer took a look and signed off on Errek’s design. Sooooo, we ended up with EXACTLY what we wanted for the EXACT price we were willing to pay.

Awesome, right? We thought so.

But there’s a whole lot more to the story of how we got our foundation than just, “Wrote a check. Work got done. The end.” It’s a story filled with back-breaking work, loud noises, plumbing problems, cat sitting, and being unable to safely enter or exit our home for about three weeks. So, now for the nitty gritty and the pictures.

Beams of Steel, Part I: The Water Heater 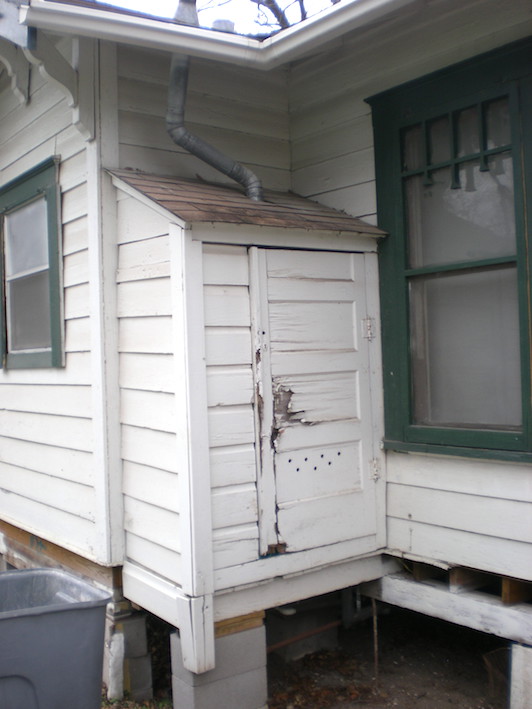 Since we’re going to be completing the final foundation, we figured we should get rid of the parts of the house that we’re not keeping. So that meant it was time for the shiny new tankless water heater. Woot! 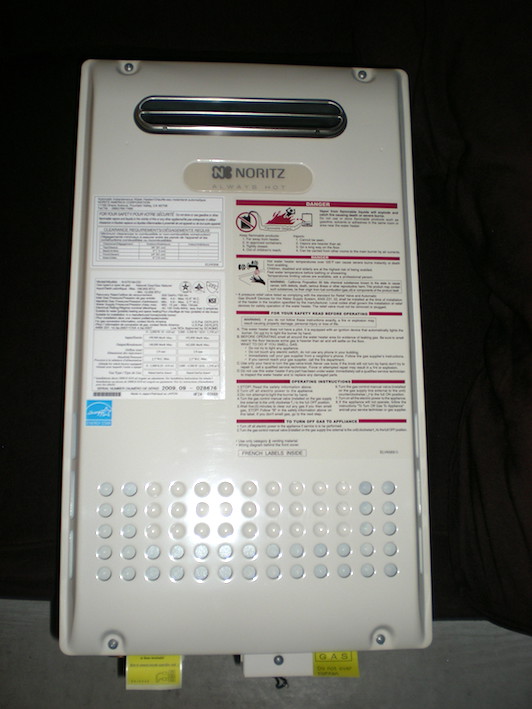 Errek dissected the closet layer by layer and tumped the water heater into the driveway, in order to make room for the new unit. 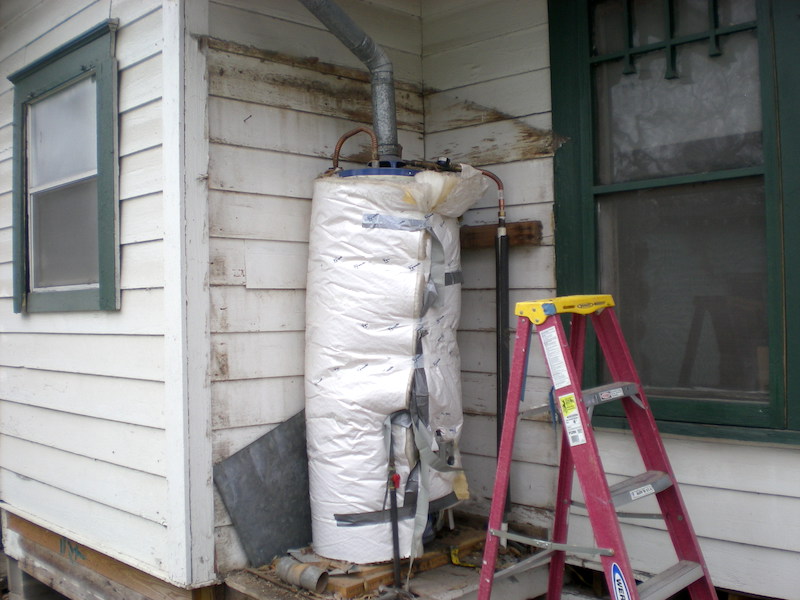 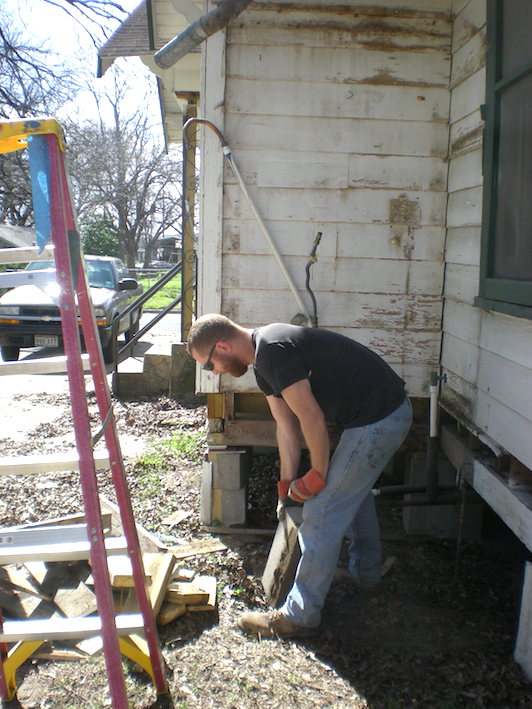 Alright, ready for the new waterhe- But wait, what’s this strange stuff falling from the sky? 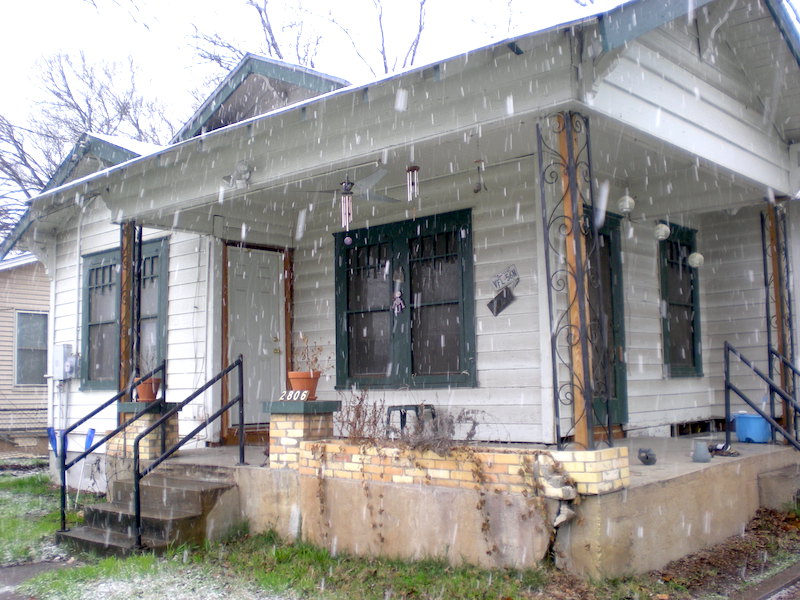 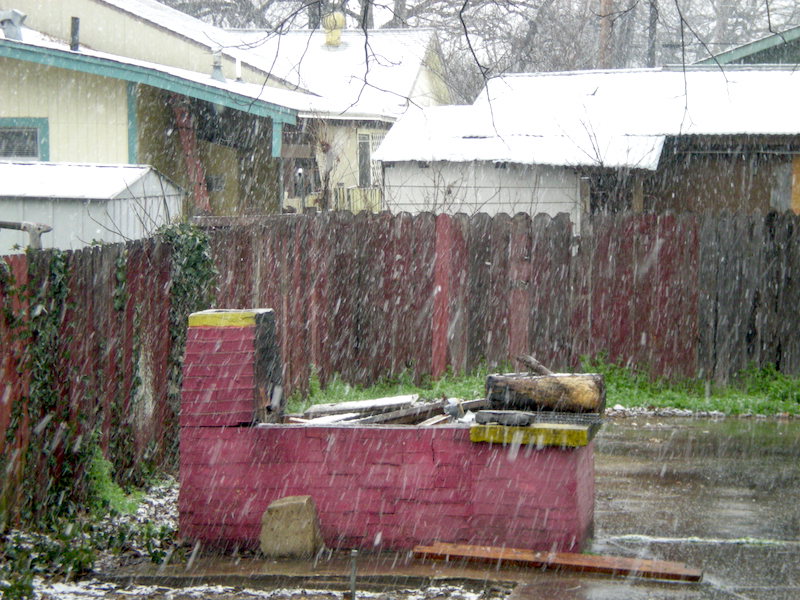 Oh you have GOT to be kidding me. This is Austin freakin’ Texas. We’re further south than parts of Mexico, these huge snowflakes are, well, frankly they’re confusing me. Mommy, is this what the end of the world looks like? No dear, that’s just El Nino, and the craziest winter in memory. Ah. Well, ’tis not a problem. See, Errek here grew up in Delaware, so he’s not frightened by the scary snow monster. Nope, he sweated the copper in the driving snow. Behold, driving snow, Austin-style. 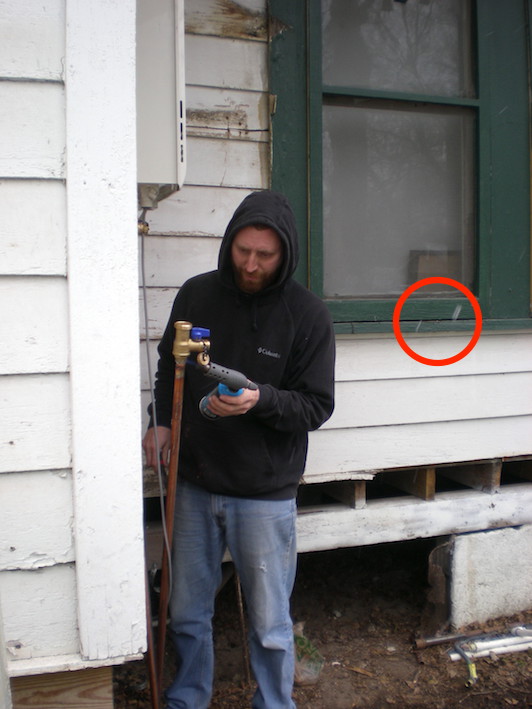 Unfortunately, sweating copper is really hard in cold weather, but we really, really, really needed hot water, so he made it happen. My hero! 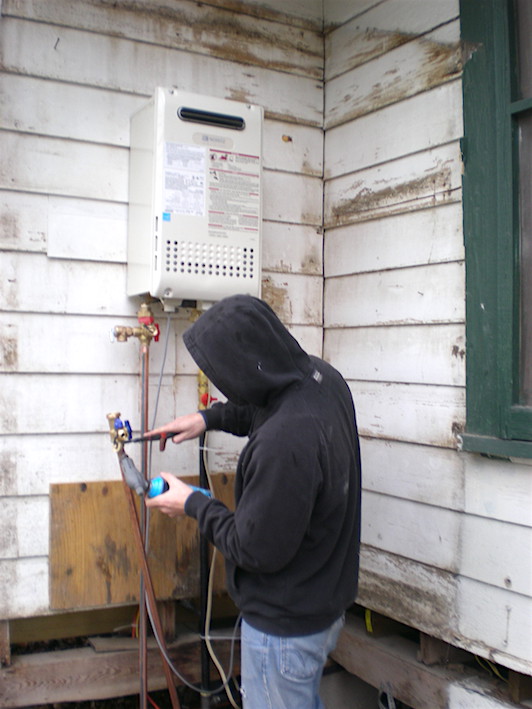 Check it out, accumulation, Austin-style. 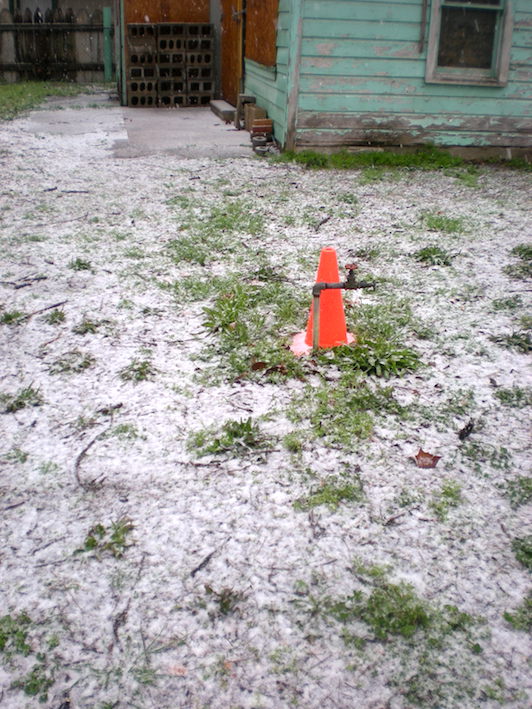 Dude, it snowed in our breakfast room. 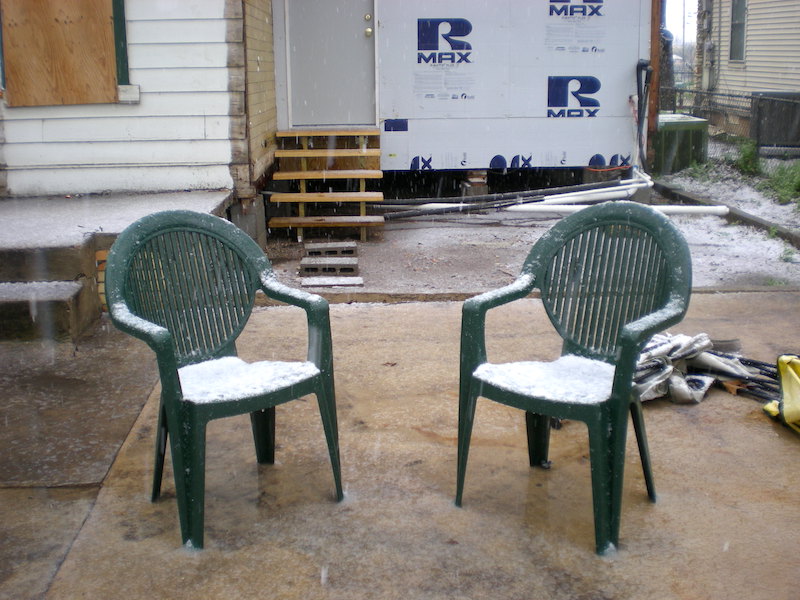 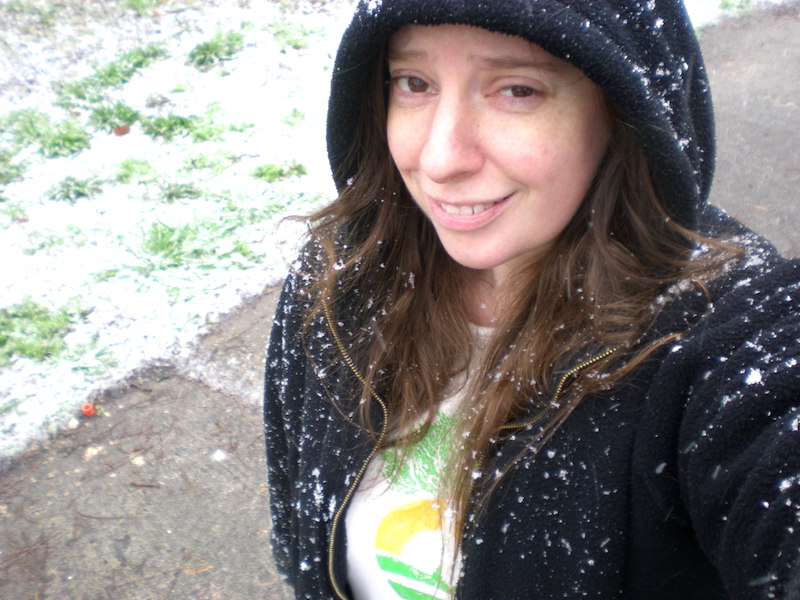 Okay, cold snap gone. Water heater finished. And can I just say, on-demand hot water is the greatest invention of all time. 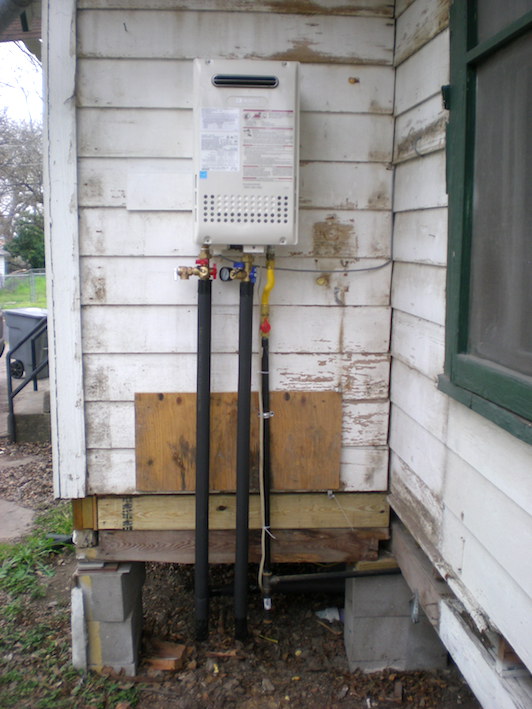 Out with the old, in with the new. Woot! Woot! 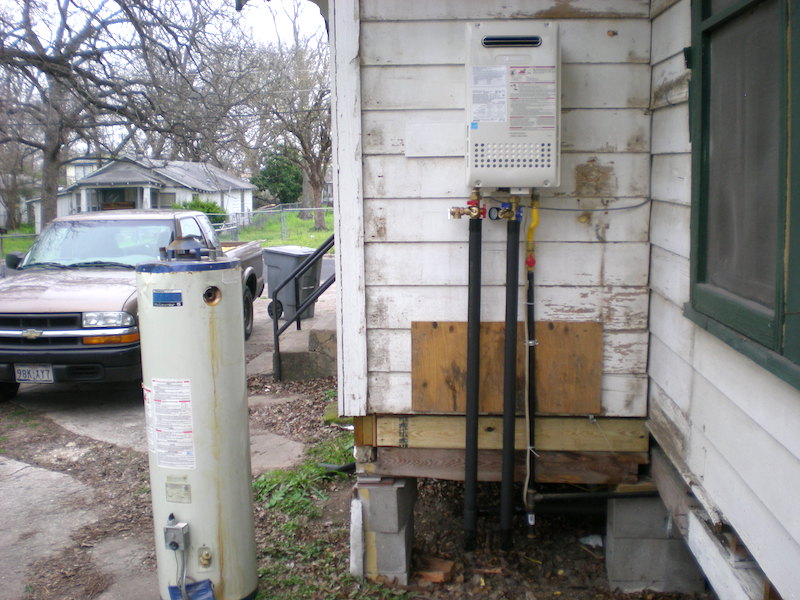 Okay, water heater closet removal. Check! Next up, take out the porches.