Okay, remember way back when the dramatic chipmunk was all concerned about our busted water main? Well it’s time for us to be concerned about it too. Actually, we’ve been crazy concerned about it all along. At first, we were turning the water on and off at the meter a couple of times a day and drinking bottled water to get by. Next, Errek dug up the water main to find the break, and determine what it would take to fix it. Then he temporarily fixed it, but not before deciding that he wanted to replace the entire water main with stainless steel.

Apparently, this is not normal. Most people use galvanized steel or PVC for the underground plumbing, but not in Europe, and not at Pleasant Valley Ranch. Nope, nothing about this place is normal. The problem is that because it’s used so rarely, it’s not easy to find. All the various parts were being shipped from various places throughout the country, so we had to just collect everything until we could actually piece it together and put it in the ground.

Errek mapped and measured it all out and rented a pipe threader, so he could put the pipes together and get them ready to go. And yes, you read that right, the pipes had to be hand-threaded by Errek. And it was a pretty neat process. 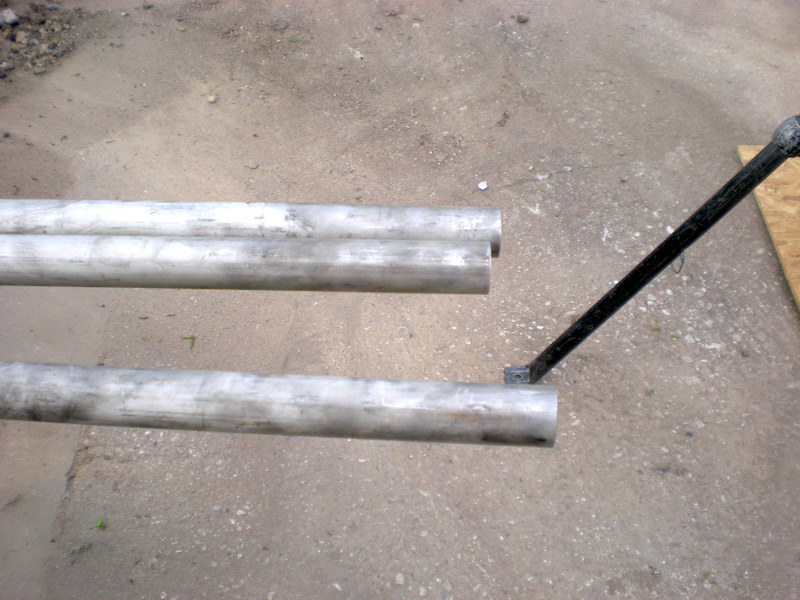 Then he’d mount them in this cool tripod dohickey and put the hand-treading crank on the end. 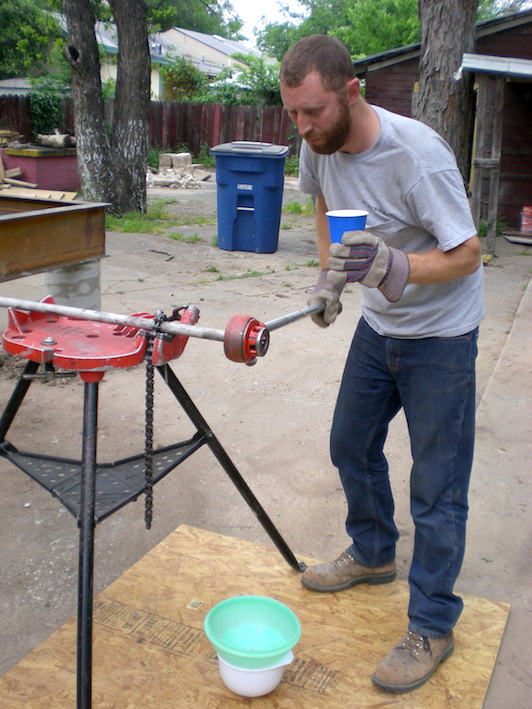 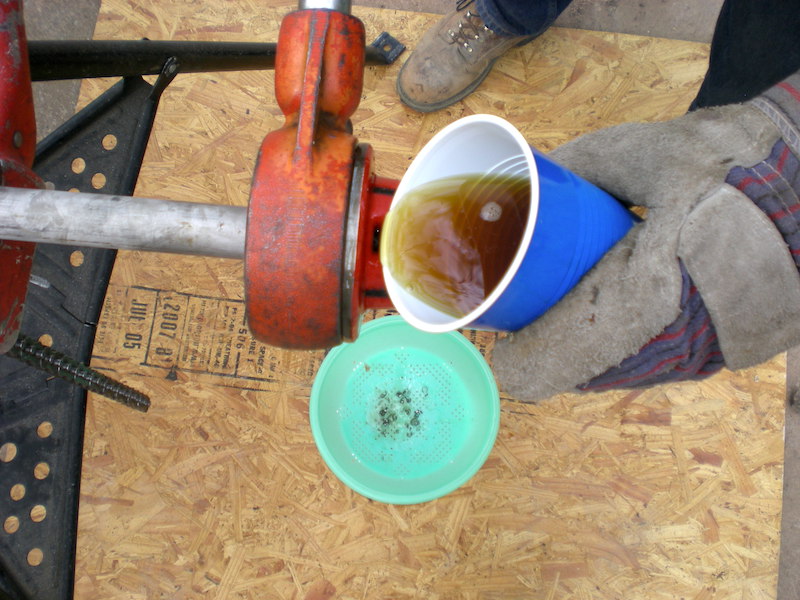 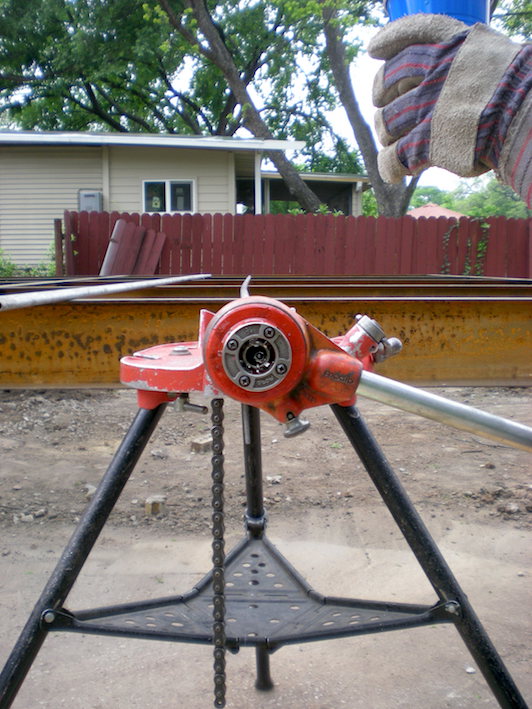 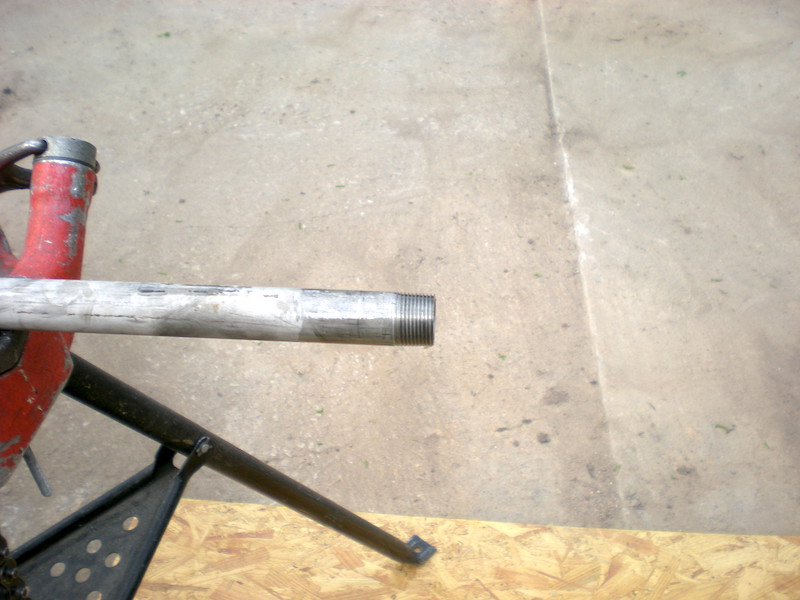 Once threaded, it was easy to just add the sealant, put on the connector, and tighten with a wrench. 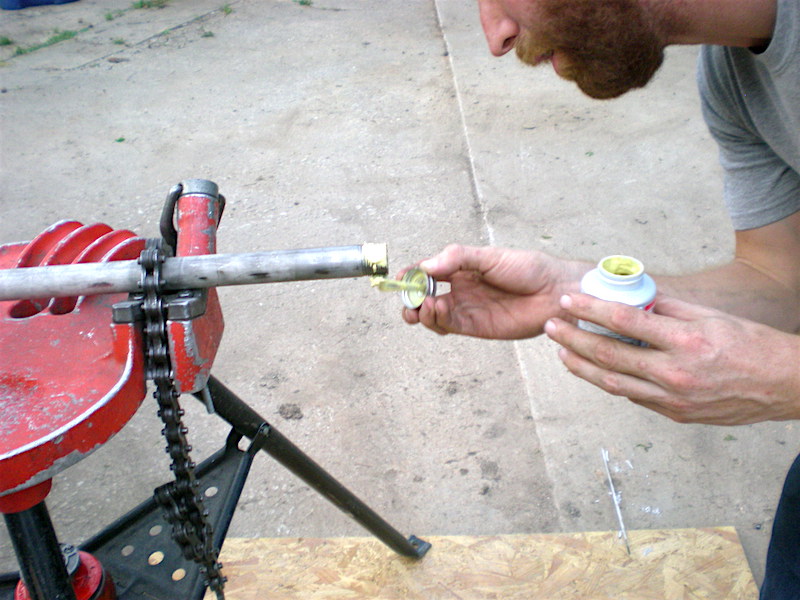 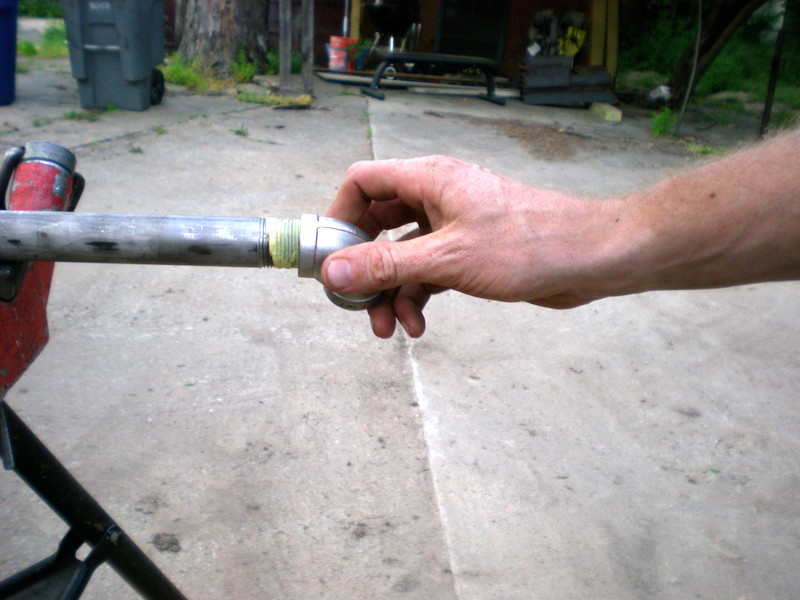 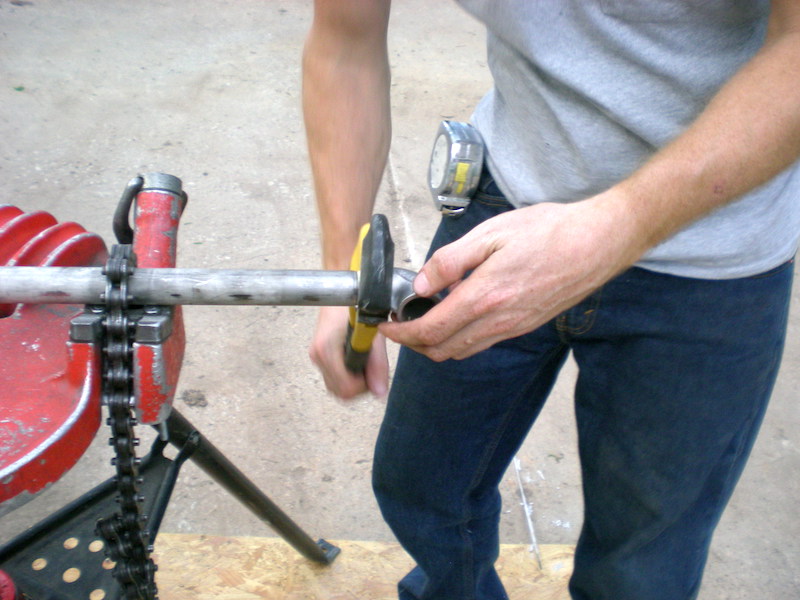 Hrm… Actually, scratch that. The word “easy” has no place in this blog. But of all the things we’ve done, threading the pipes was… the least difficult so far.

But the not so difficult part was over quickly and the difficult part, well that never ends. Cuz guess what, it’s time to dig in the dirt. Deja Vu! This time, however, we turned to technology to simplify our lives a little. Say hello to the Ditch Witch…which will be referred to here-after as the Bitchin’ Ditch Witch. 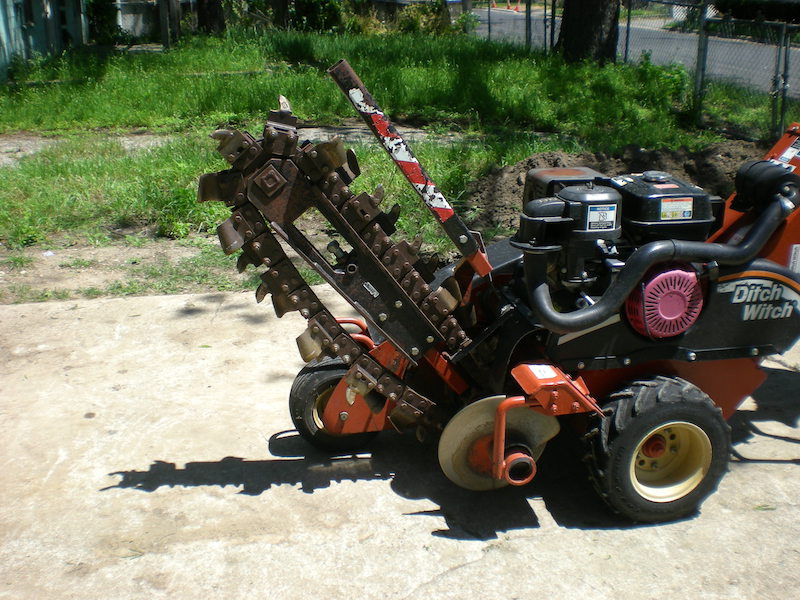 Yep, just this once we decided to rent a tool that would cut the amount of work by a lot. And it’s a big and mean looking tool, too. Bonus! 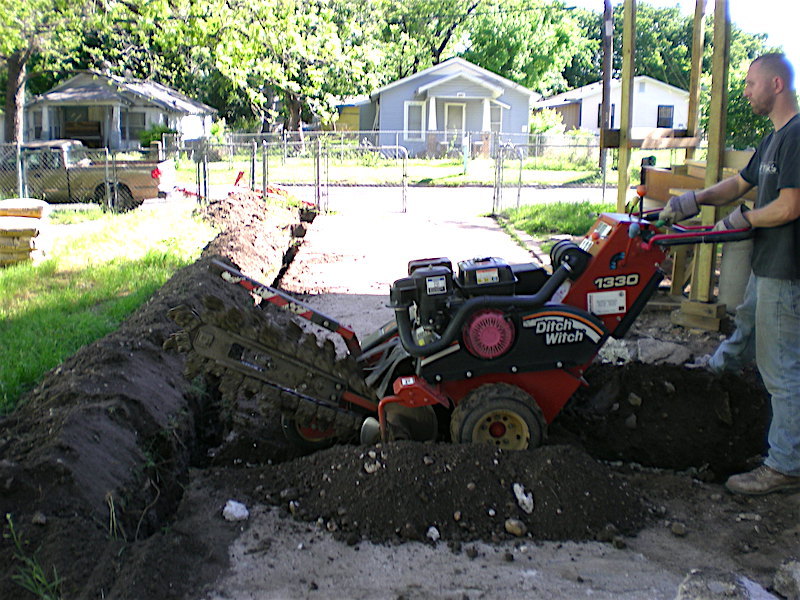 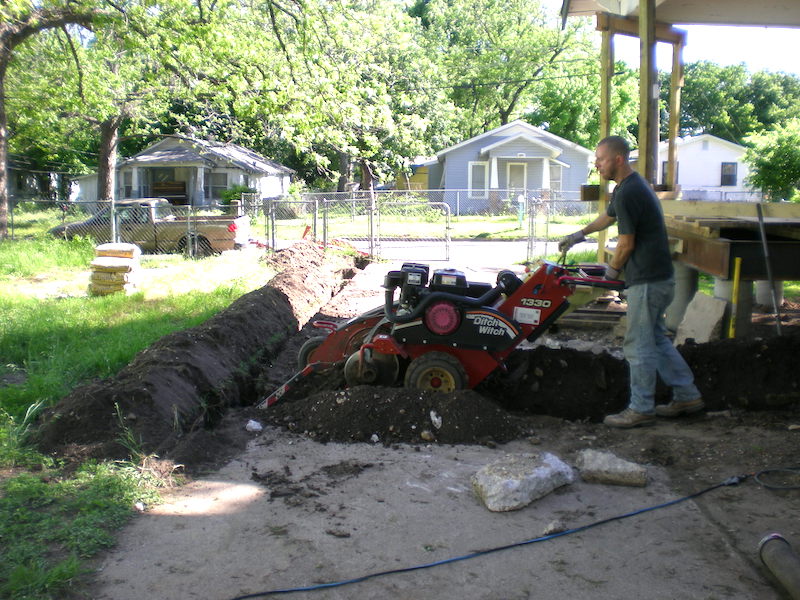 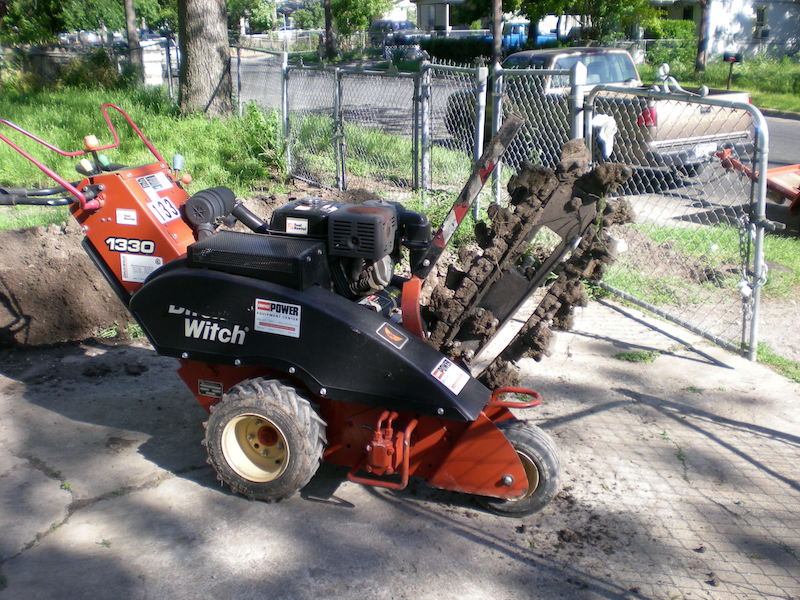 Bitchin’ Ditch Witch was super helpful, and even revealed the source of the problem — a rusted out galvanized steel 1/2″ pipe, aka our old water main. 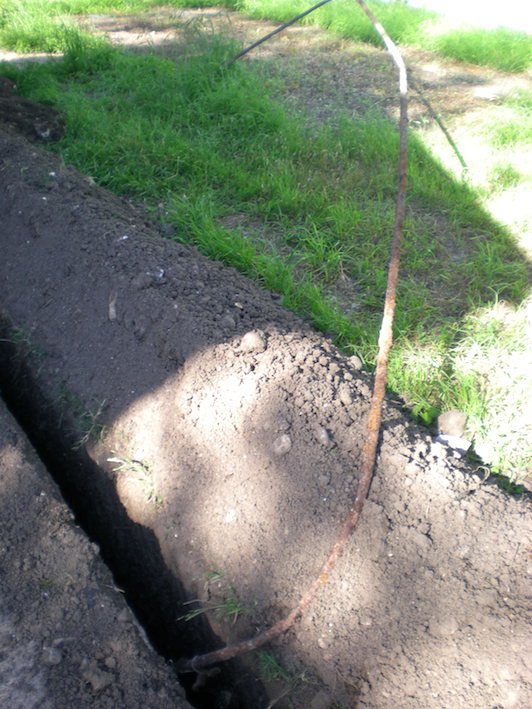 Errek gave that pipe a piece of his mind. 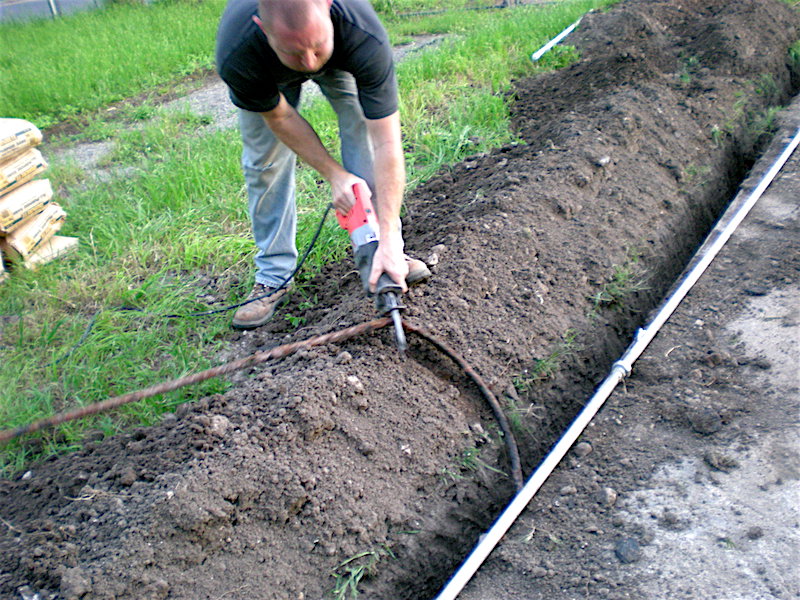 Then he assembled our new line. It was complicated though. See, the city line is brass, and our line is stainless steel. Apparently when brass and stainless steel touch each other, they eat each other. Weird, right? Well, they do. So we had to get these weird flanges which separate the two. 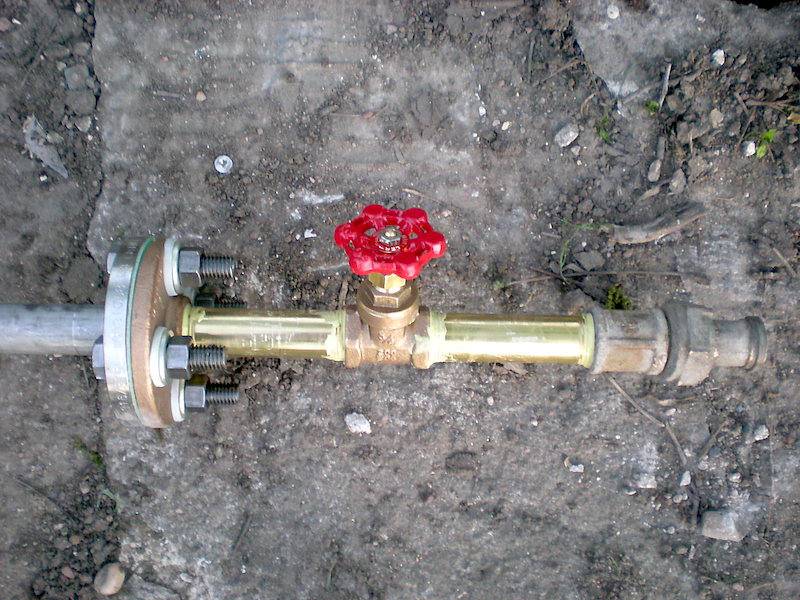 Errek hooking the main up to the city water. 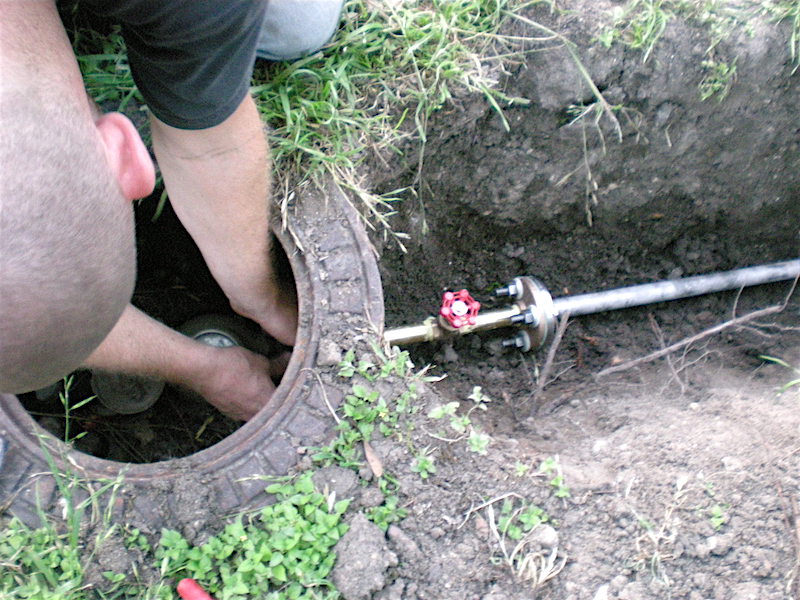 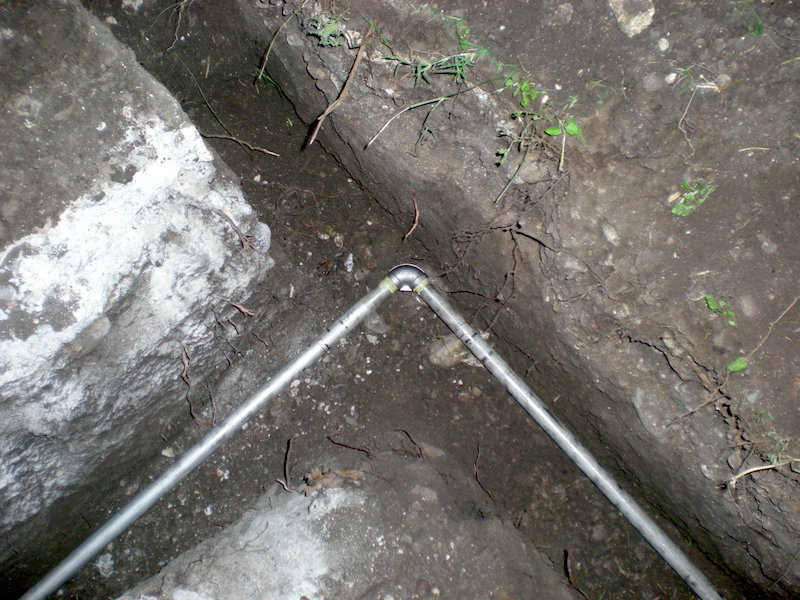 Just FYI, plumbing sucks. We recommend hiring the job out. 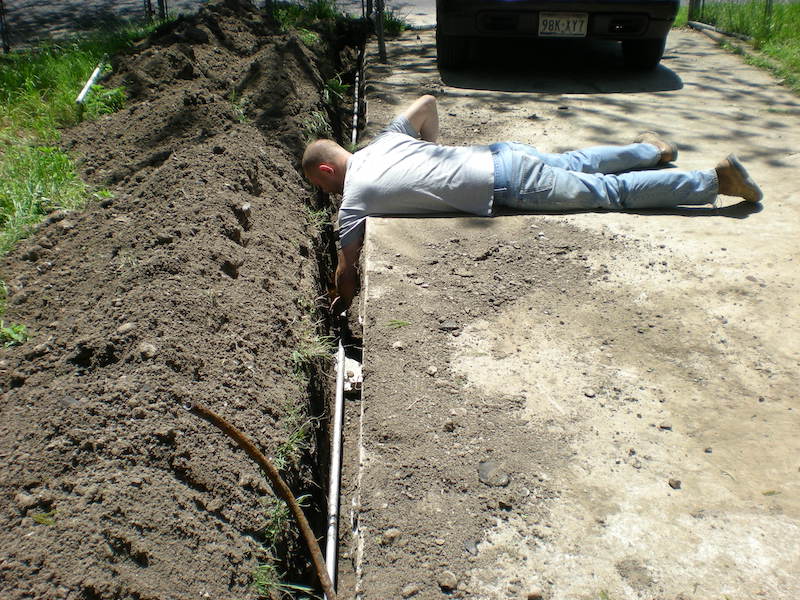 When the steel comes back up from the ground, under the house, it connects again with brass for the backflow valve and the pressure reducing value, and then it will connect with copper (eventually when we can afford it and feel like replacing all the PVC). Apparently copper and brass can touch without eating each other without eating each other. Go figure. 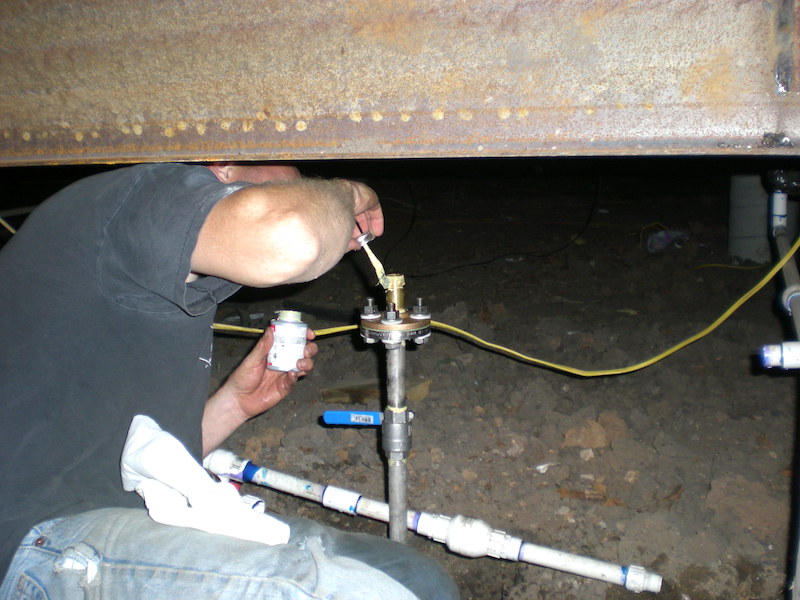 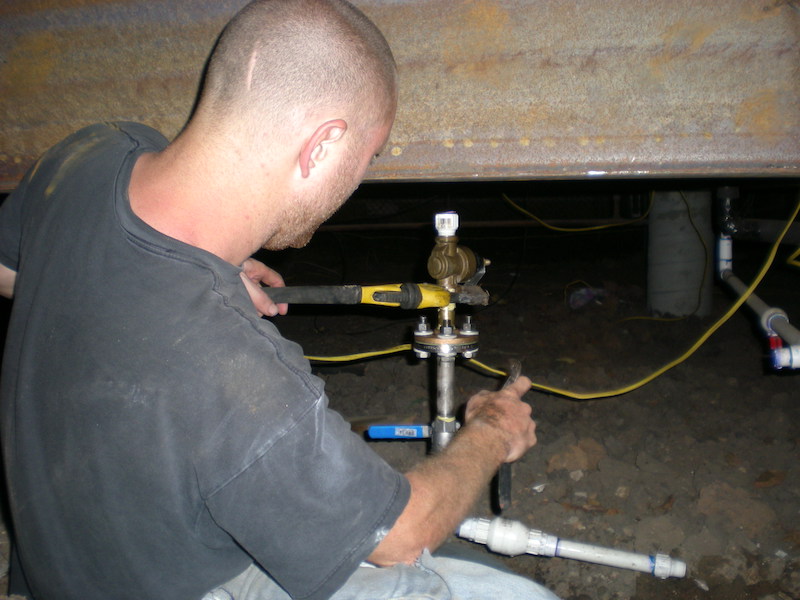 Did I mention that this photo was taken at 2:30am and we were missing an awesome party? Note to selves: next time hire a plumber. 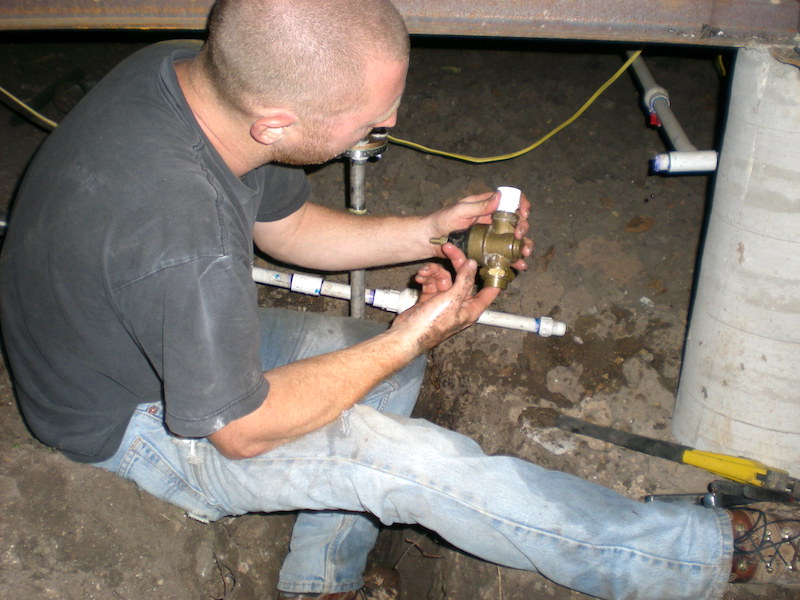 But never mind the bollocks, the point is that we can once again take hot showers, wash our clothes, and sit on the porch (now 13 inches higher!) while drinking beer and feeding the neighborhood mosquitos. Life is pretty okay. 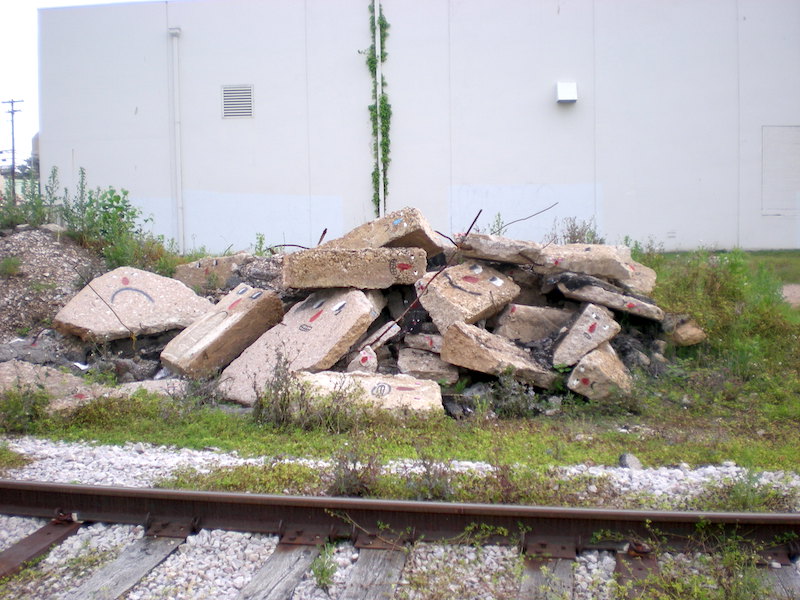 Hey, you two on the left, what’s your prob?

Meh, whatever. Stay tuned. Next up we will be laying the “deck” which is a fancy way of saying that we’ll be putting in the joists and plywood subfloor. Then we’re going to be framing up the walls in no time. From here on out, the updates will be increasingly filled with stories of the construction of new and wonderful things, and less and less about the destruction of old and horrid things. I, for one, am really looking forward to it!