Chapter 51: Sky, Why Hast Thou Forsaken Us?

Well, we’d passed our framing inspection, so it was time to get the old roof off the main house and get her done, right? Eh…almost.

See, the next step was to call out the roofers and have them remove all the shingles, but, in case you forgot, our porch was still being propped up with wonky supports. 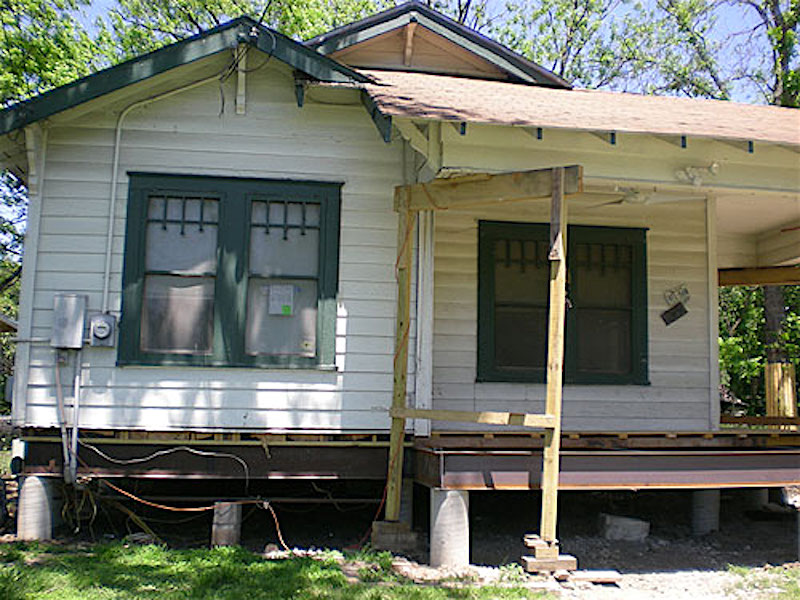 We really didn’t want a crew of guys standing on a roof that could go sideways at any moment, so we needed to get the permanent porch support posts up.

Time for a new trade — welding!

First Errek jacked the porch roof up until it was level again. 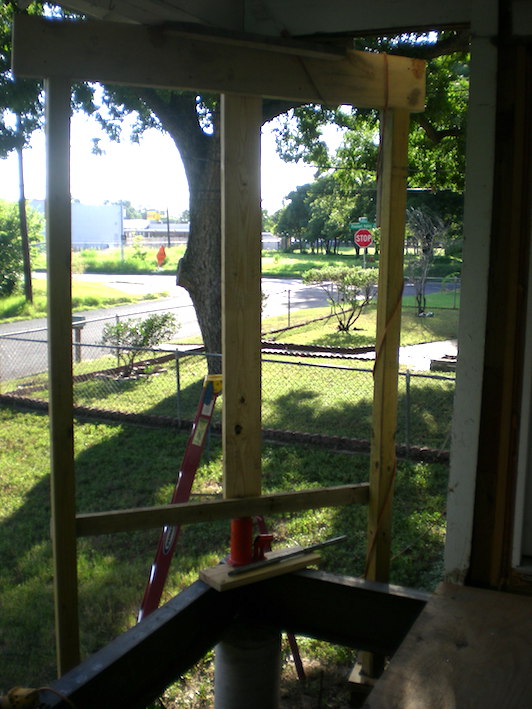 Then a dry fit of the new steel post. This post is just the structure. Eventually we’ll encase it in wood to make it pretty. But steel is supa strong, and clearly we’re big fans of the supa strong. 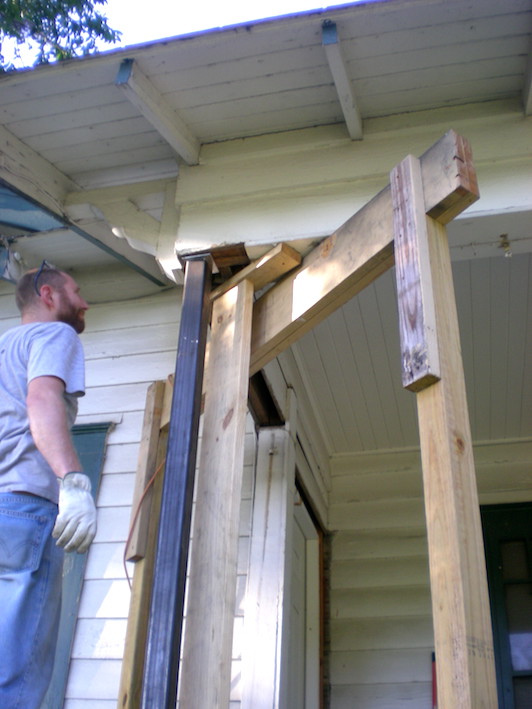 Now, it’s time to get suited up. Despite the temperature (which was in the 100s at this point), Errek had to wear this. 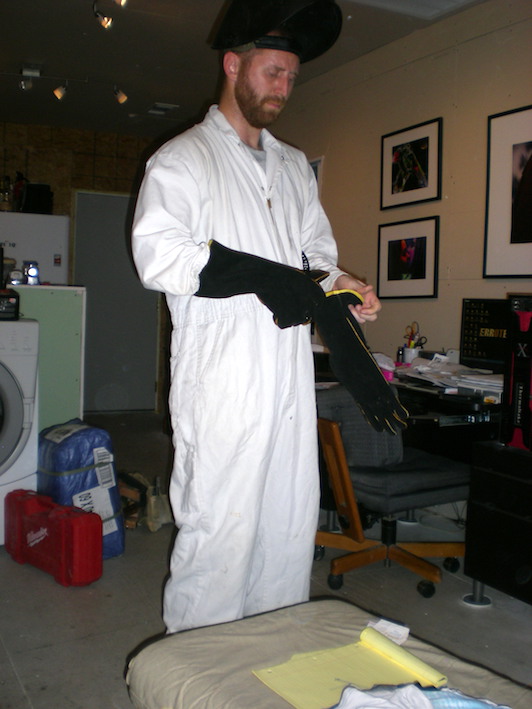 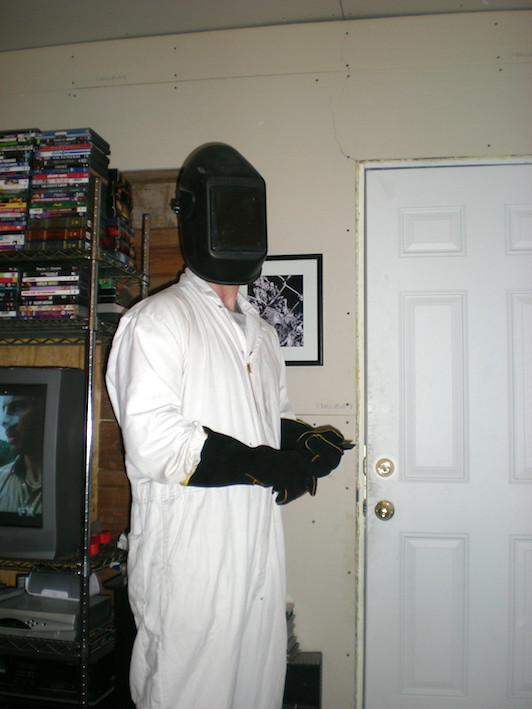 And this is why. Hot! 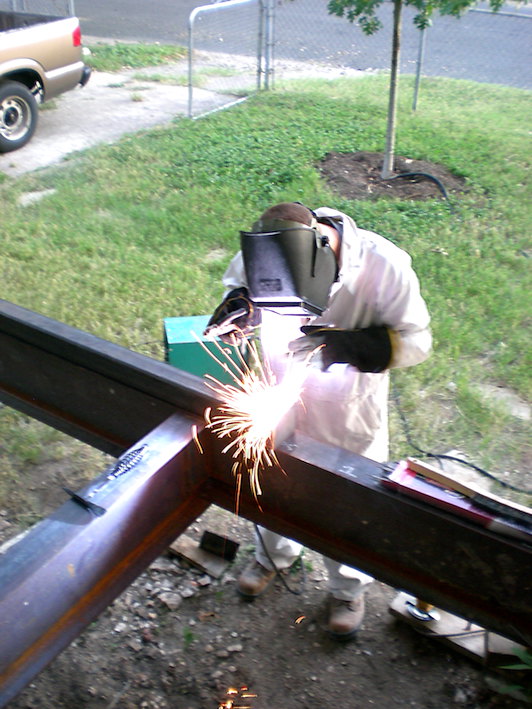 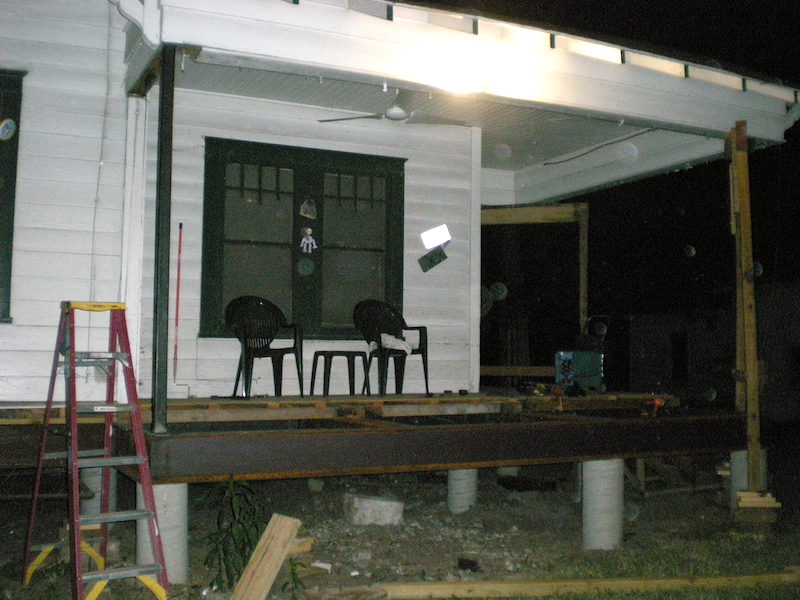 Welding in the setting sun. 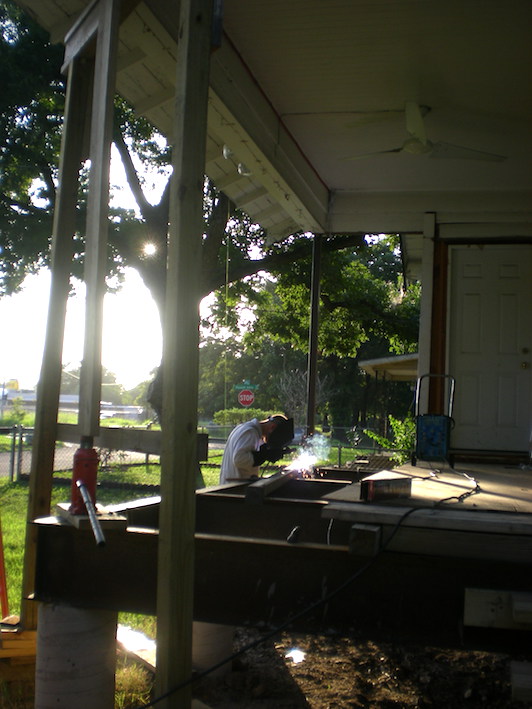 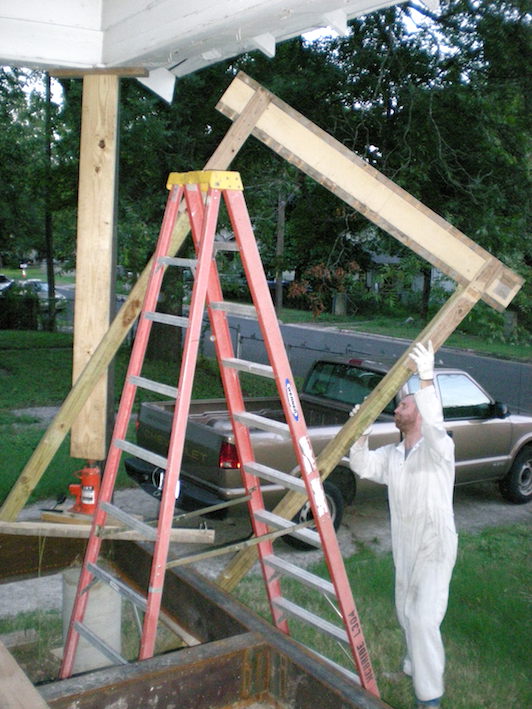 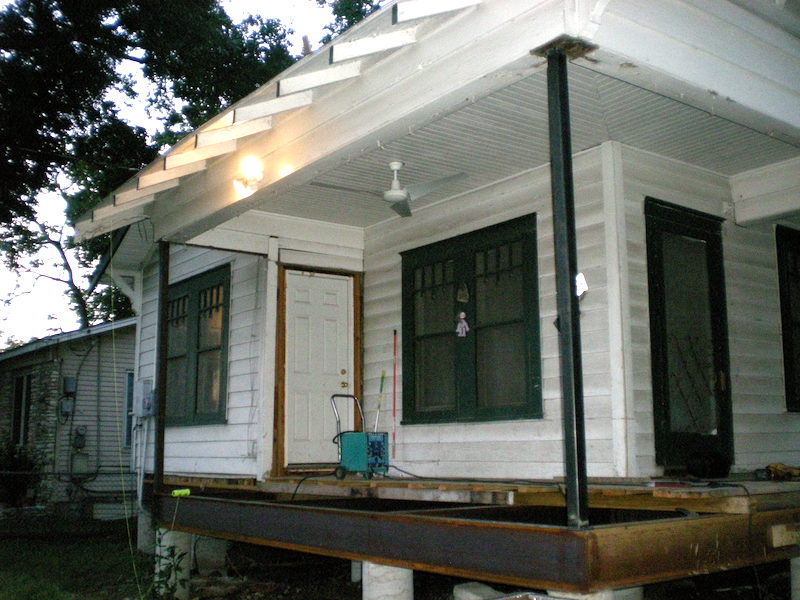 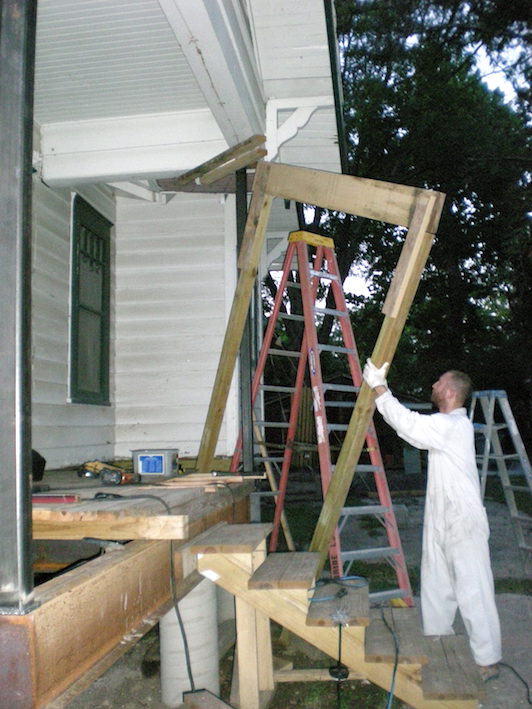 Look at that sexy, safe house. 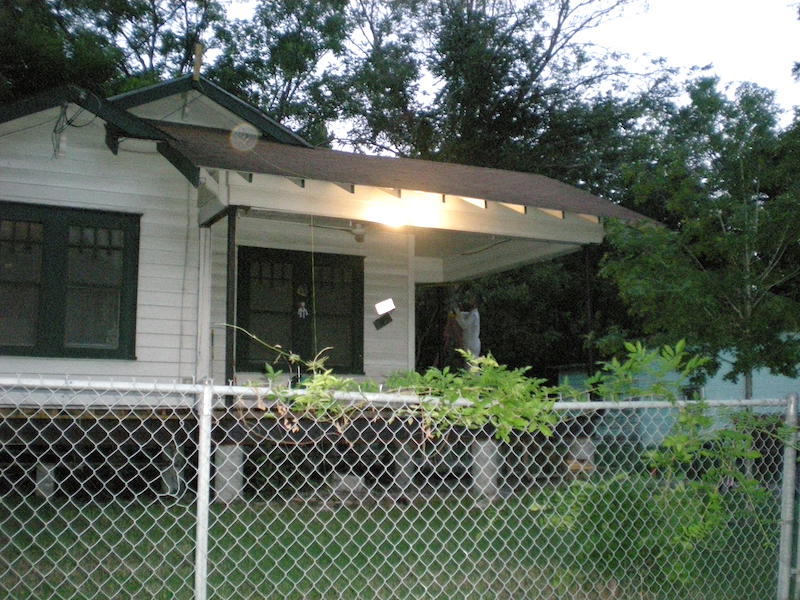 Ah, if only everything would go as smoothly as that welding project. Le sigh.

Alas, it seems that every time something goes smoothly, something else must crash and burn. I mean, the universe needs balance, right? Yeah, well the universe was about to balance itself all over us.

Now that we had a safe and approved structure, it was time to take the next leap. We called the roofers to come out and rip the shingles off the existing house.

That morning the weather report was a 10% chance of rain, but we’d had weeks of 10% days that turned into 0% days, so we rolled the dice.

The crew came out and scraped all the shingles off, leaving just the “decking” behind. Our decking consisted of a hodge-podge of one inch boards. As a side note, they are awesome. Our plan is to reuse the boards as a fence or something — many are stamped “Property of Austin Mueller Airport” so they’re full of history and we love them. However, they make a piss poor rain barrier.

That’s why the plan was to put the new tarp on the house as soon as we got home from work. Problem: That morning Errek has a meeting at work, which meant his day started later than usual and ended later than usual. Instead of getting home at 2:30 he got home at 4. And guess what, at about 3:30 the sky started 10%ing all over us. Yep. In all of Austin, there was just one big, fat thunderstorm that bubbled up right on top of our house.

When I got home, I saw this — a shingleless roof slightly damp with the early part of a rain shower. 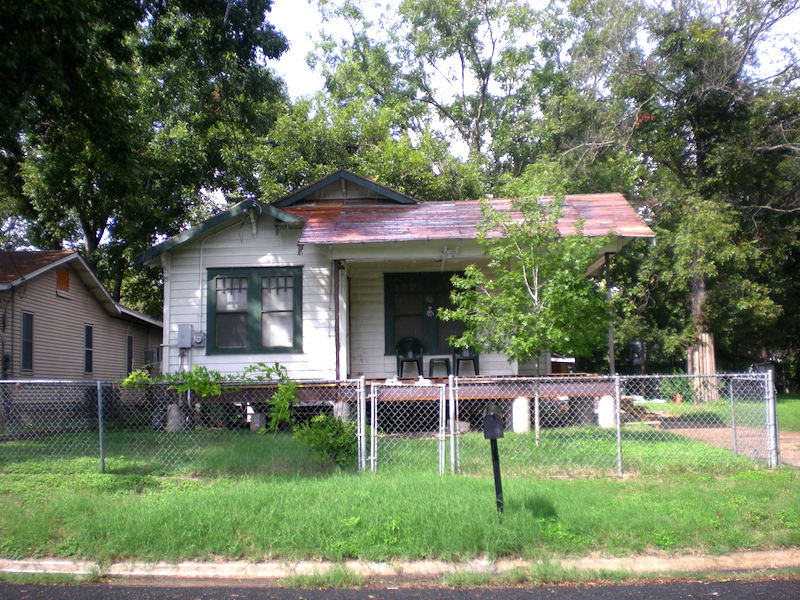 Within a few second, I saw this — pure, unadulterated evil raining down upon the house with great vengeance and furious anger. 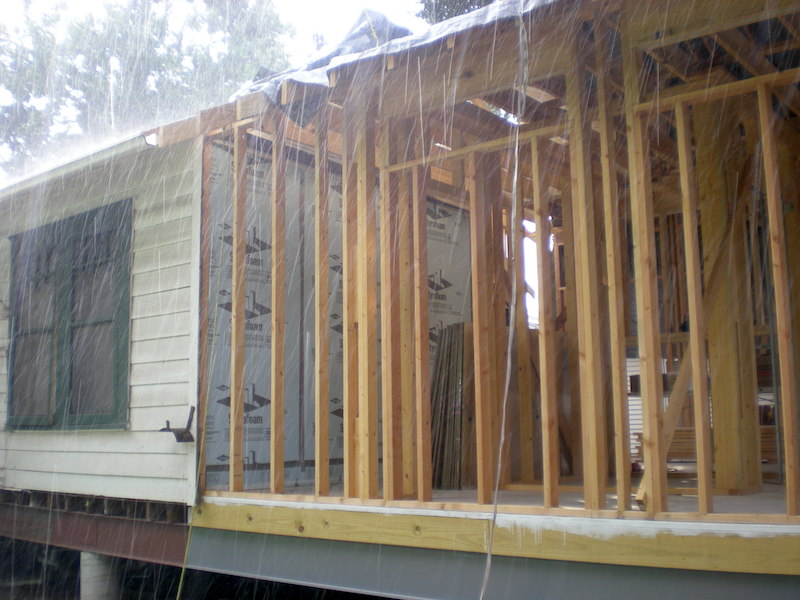 This was all that stood between our ceiling and a tropical downpour. 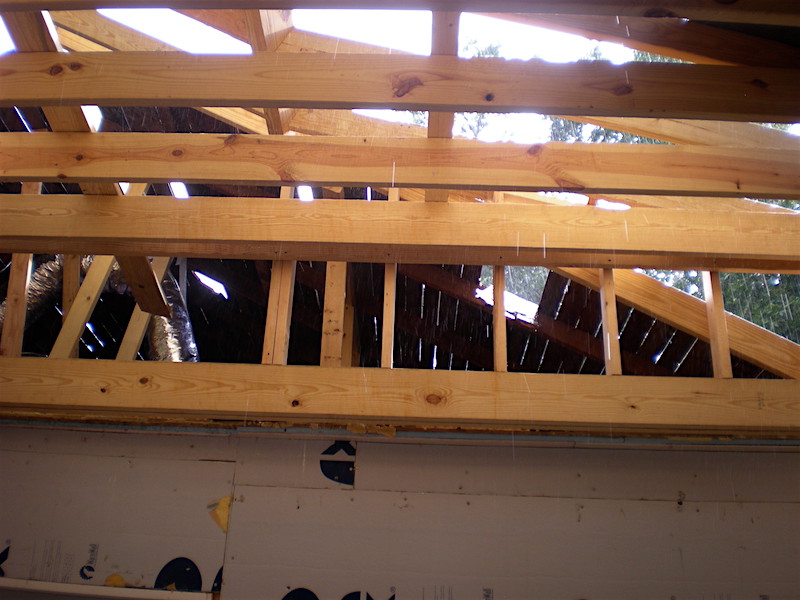 See that blue thing next to the dryer and Sawzall? That’s the tarp! See that tea colored liquid collecting on the floor? That’s the rain! 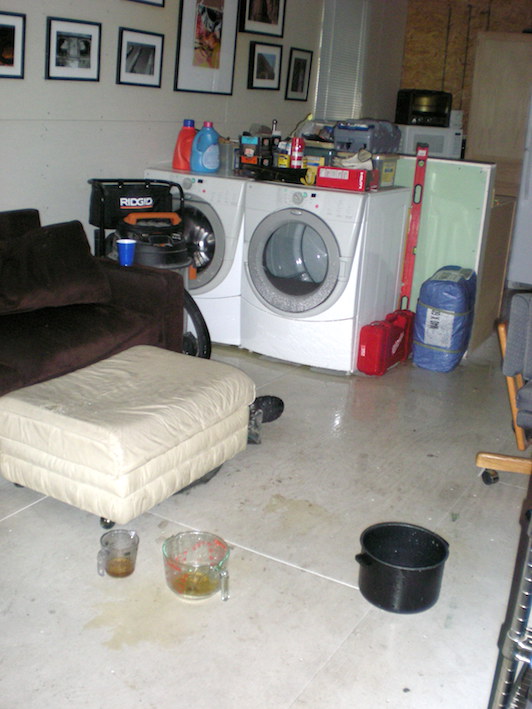 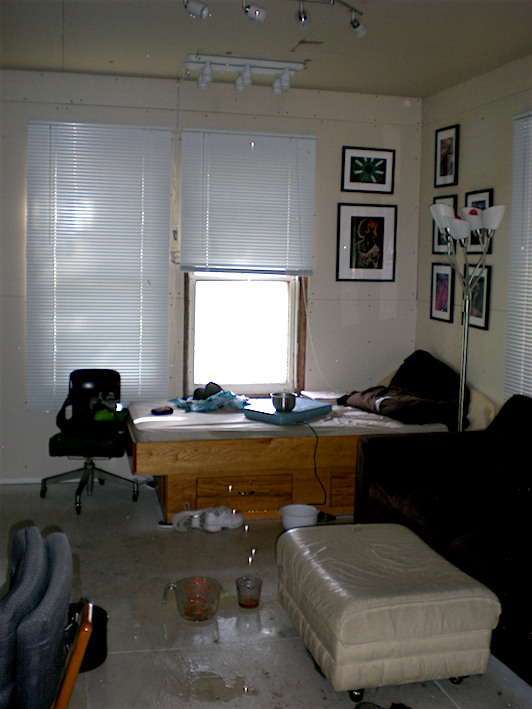 In the bedroom it was running down the fan and the moving blades sprayed the entire room with 60-year-old dirty water. I thought, “cover the bed! cover the bed!” Sadly, it turns out that sleeping bags are not waterproof. Covering the bed with one, pointless. 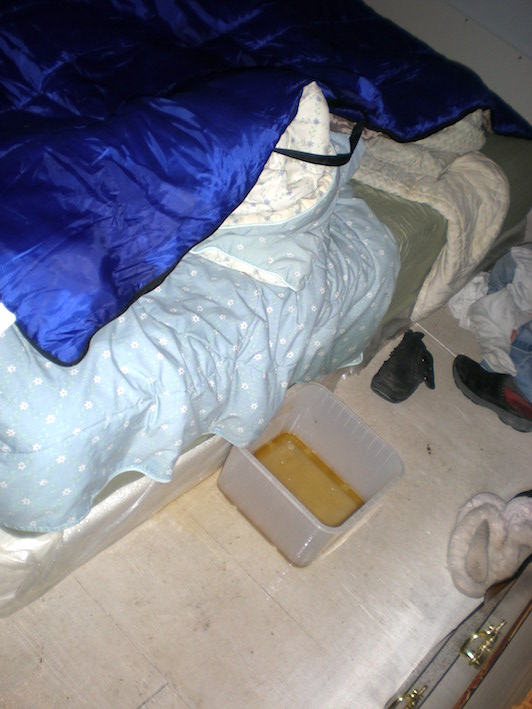 That Monday, Errek came home to find his usually buoyant gal nothing more than a sobbing, huddled mass on the shower floor – ironically, the only dry spot in the whole house. My only words between sobs, “I ran out of pots and pans.”

Errek lifted me up, literally and figuratively and together we cleaned up the house. He climbed up onto the roof to unfurl the tarp. Oh look, blue skies again. Thanks 10% storm, you ass. 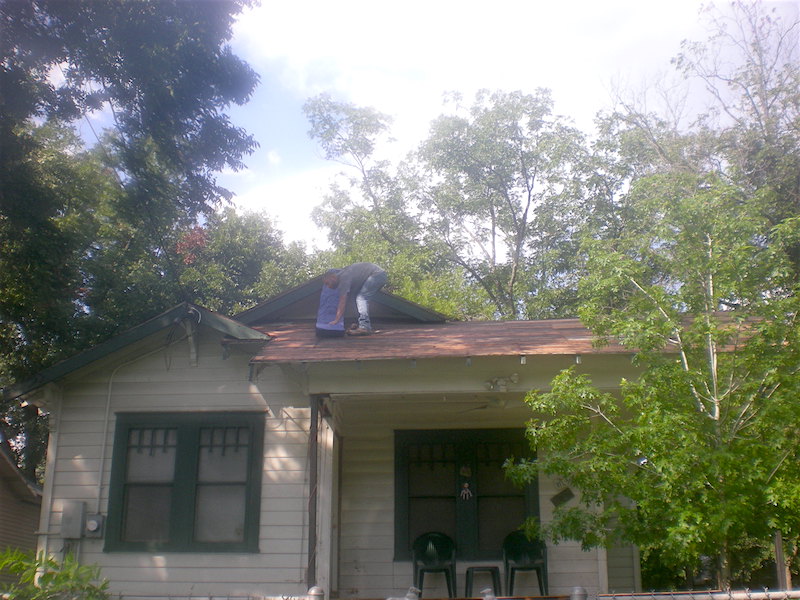 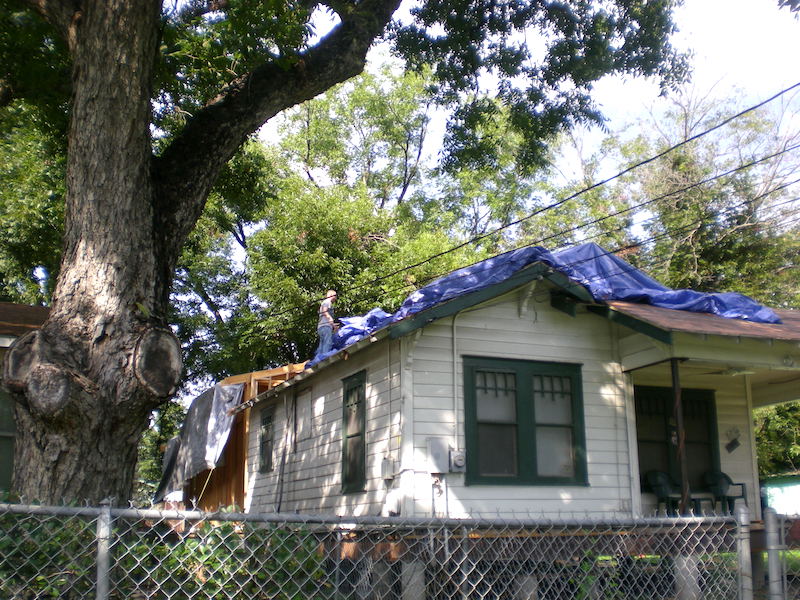 By the time Errek was getting the tarp up the rain had stopped, but the dripping continued for hours. Chinese water torture, I get it now. 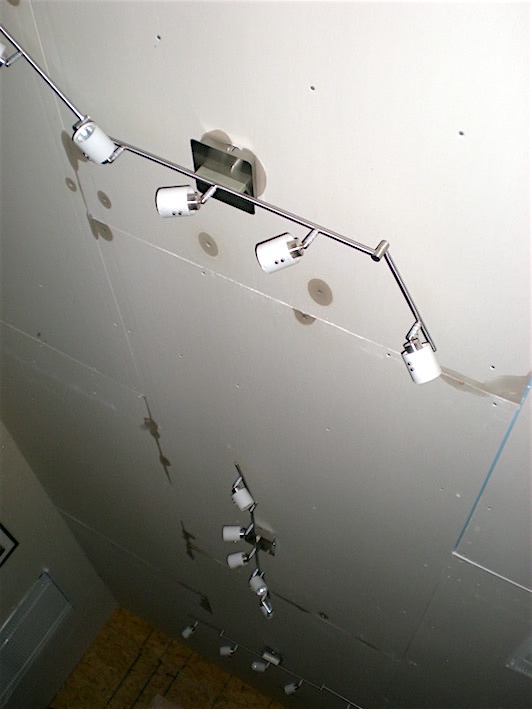 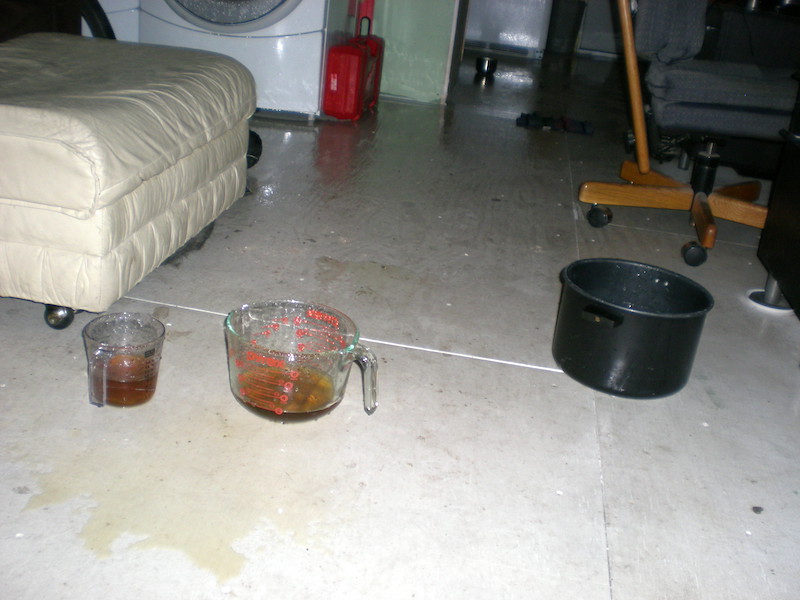 Eventually, the water even found a way into my only sanctuary — the shower. 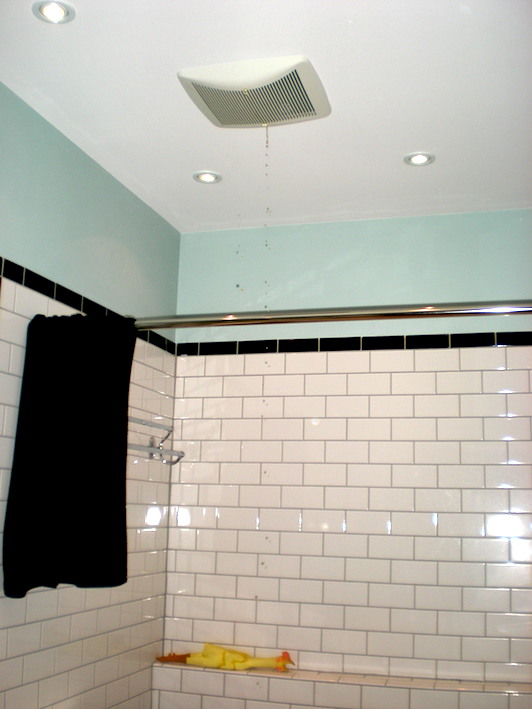 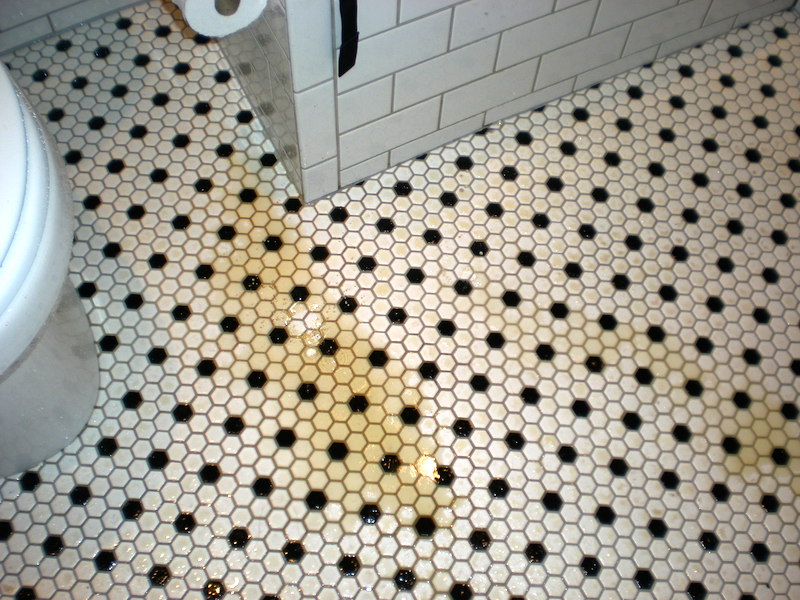 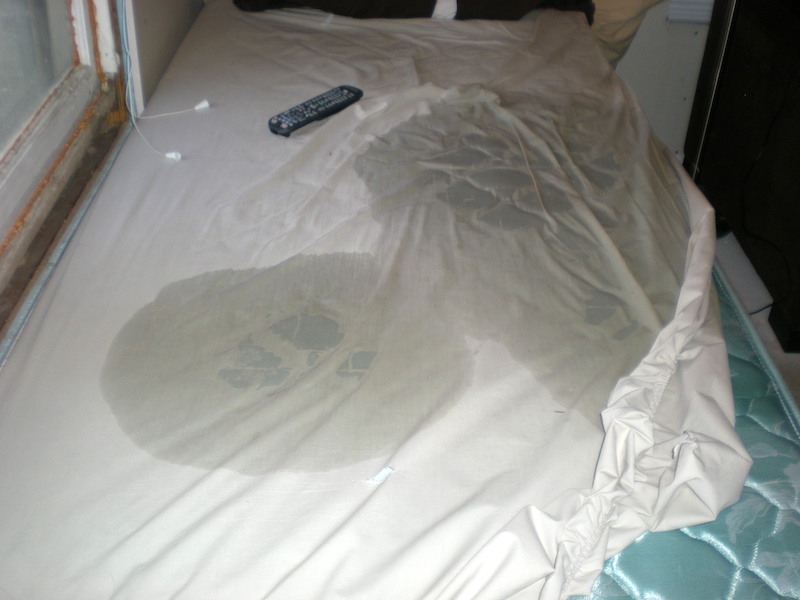 Yep, that was pretty much the lowest low we’ve hit…so far. Took me a while to bounce back to my jovial self. Albert Maslow was totally not kidding when he put shelter/safety as a basic level in his hierarchy of needs. Life is just a lot harder when you don’t have a roof overhead. We’d already broken the stress meter with this roof, and we’d barely gotten started.

But you can’t stay down forever. After all, we were living under a freakin’ tarp! That’s not exactly the time to wallow in self pity.

So we sprang into action….again.