For many years now Errek has been telling everyone who will listen about his “skin vent.” As dirty as that sounds, it’s actually a genius way to save energy by making it easier for the house to maintain its temperature using air gaps to vent hot air up, up and away.

As you might remember, from our pipes-bursting-and-everyone-has-to-wear-Russian-coats-and-hats-to-our-party story, our house was pretty close to nature when it came to temperature. That’s because all we had as exterior walls was 3/8 inch radiant barrier (OSB with foil on one side). And there were big air gaps where the walls and roof met. As a result, the inside temp and the outside temp were pretty much…well, exactly the same. Good times! 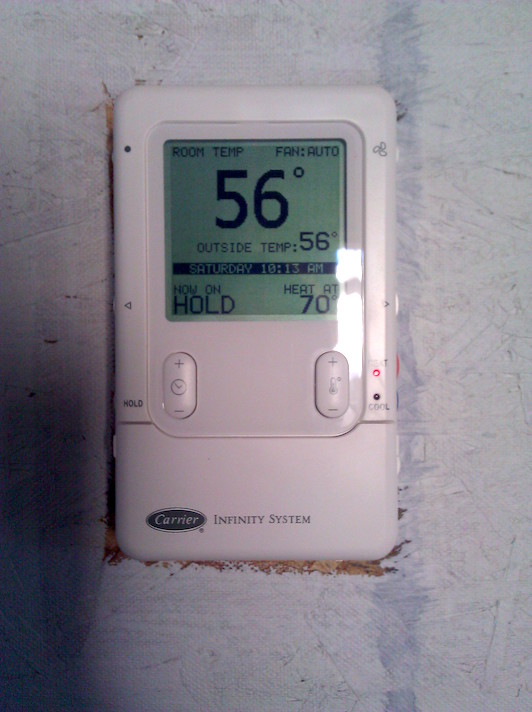 But, the skin vent construction took care of that problem, and finally closed us in. No more bugs (usually), no more extreme temperatures (usually), no more hearing every word of our neighbor’s conversation with his dogs. Which is good, because for a while there I thought that schizophrenia had set in and I was hearing voices, but I digress…

Where was I? Skin Vent! Oh right.

So now I’m going to throw a little bit of the science-y shit at ya. Ready?

Yeah, that’s about as science-y as I get. But it’s a true science fact that hot air rises, and what do we have a lot of in Austin, Texas? Hot air! Mostly it’s all the politicians at the Capitol, but also there’s the summer sun, and our proximity to the equator, and, like, some jet stream shit and stuff.

Around here, there are a lot of air conditioners working their little booties off every summer to keep us whiny wimps from melting. Well, wouldn’t it be great if we could build houses in a way to help the air conditioners not have to work so hard? Why yes, yes it would. Well hell, we thought, since we’ve already gutted our house…and our bank account, we might as well come out the other end way more efficient, right?

So, that’s the plan. We started by using the radiant barrier OSB. It’s a bit more expensive that regular OSB, but it’s foil surface reflects A LOT of the sun’s heat. So where a normal house’s walls and roof will bake in the sun all day, this house is sending those radiant rays back out. However, there’s a tricky part, the radiant barrier works best if there is a pocket of air next to it. Well, we’re planning to fill our wall cavities and spaces between our roof rafters with a solid foam insulation. That would render the radiant barrier almost useless. We needed an air gap.

Also, okay I have some more science coming your way, here goes. There are three forms of heat transfer – conduction, convection, and radiation. Well, the radiant barrier would stop the radiation, but how were we gonna stop the conduction and convection from baking our asses? Skin vent, baby! Woot.

So, what is it? It’s air gaps that run up our exterior walls, underneath the siding, then run under our roof, and end at the ridge vent in the center of our roof. So, throughout the day, as the air around our house heats up and that heat penetrates through our siding, that heat will reach these air gaps and (remember how warm air rises) it will rise up these channels within the walls and the roof and out the vent. Kinda brilliant, right? The thing is, building a skin vent is very labor intensive and not very glamour or fun.

On the outside of the house, Errek cut 2x4s in half to make the channels. 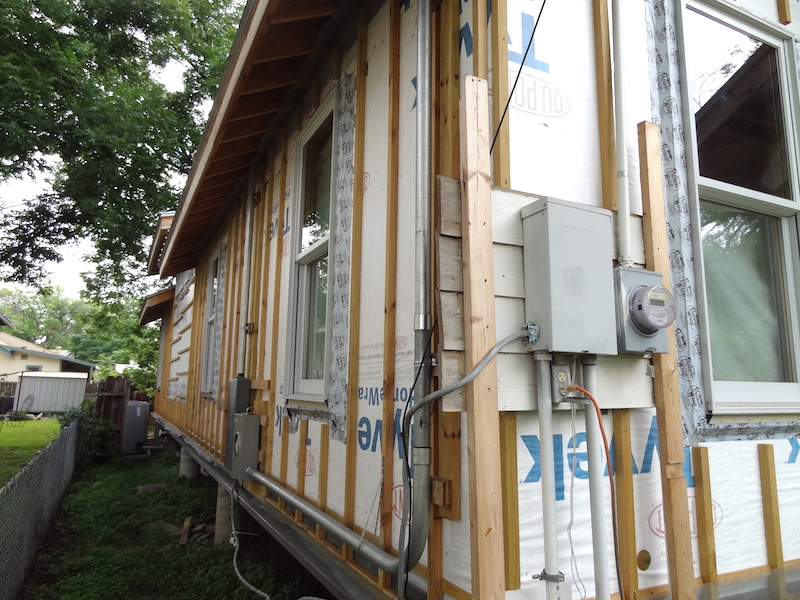 Around the windows he’d leave gaps for the air to travel into the side channels. 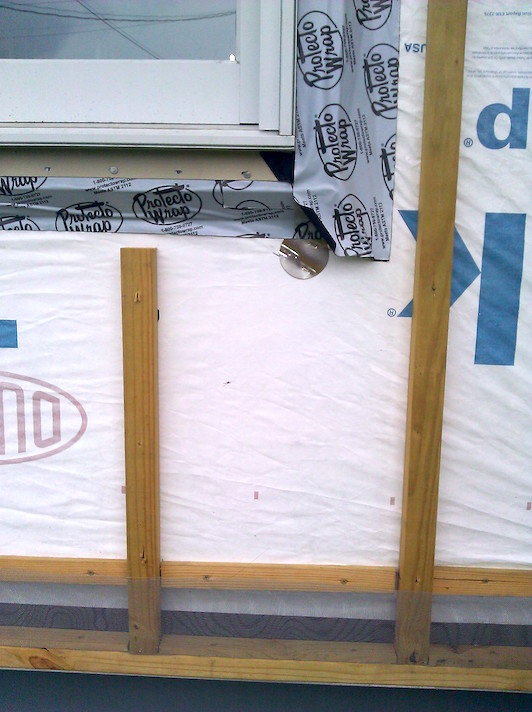 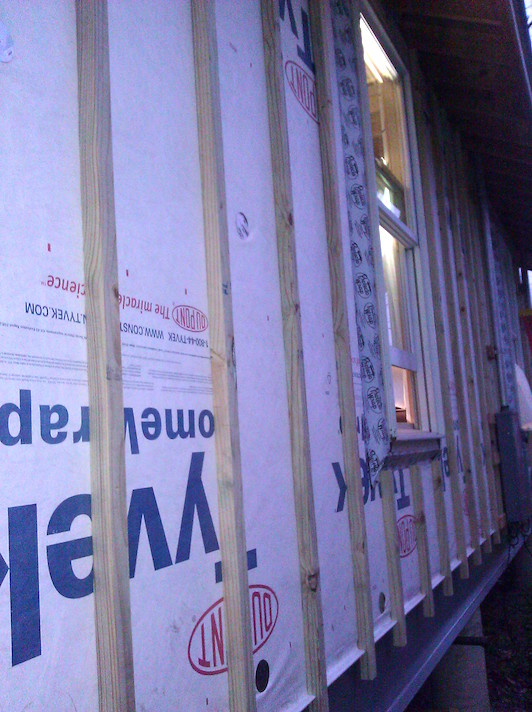 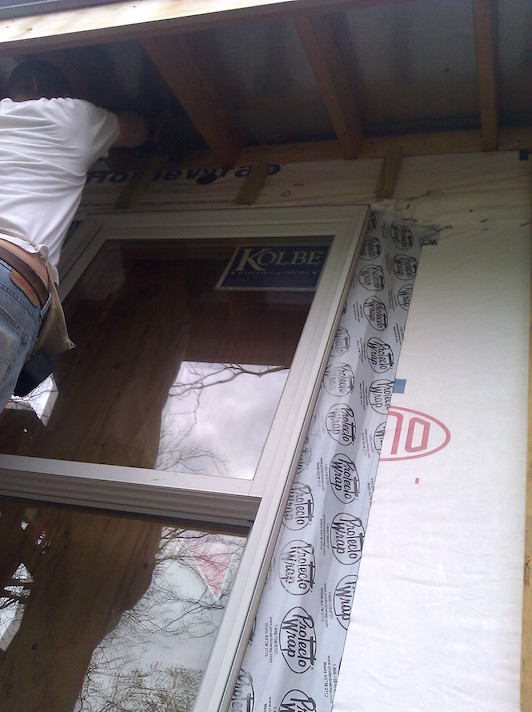 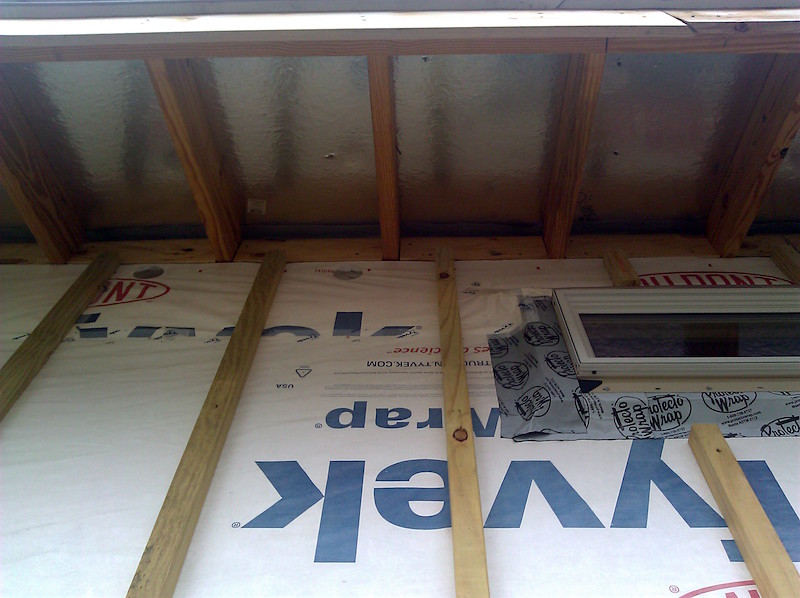 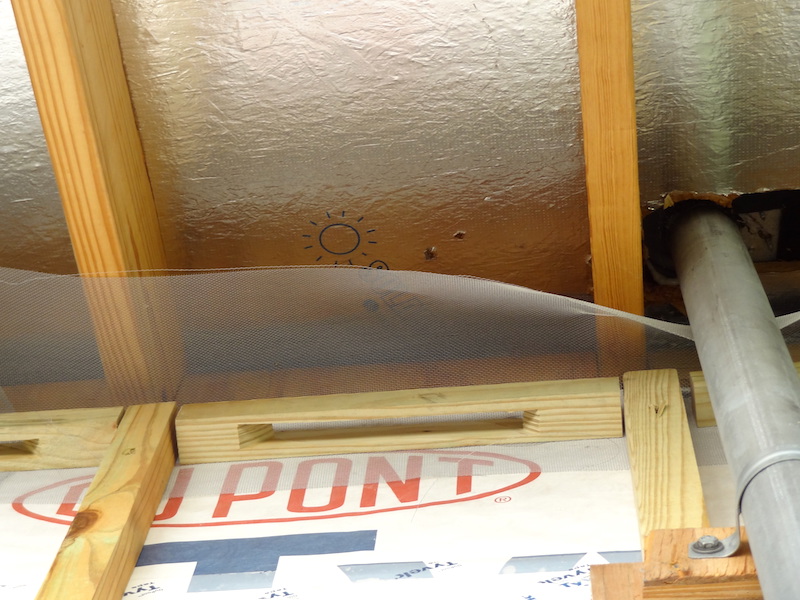 Meanwhile, in the attic, I cut long pieces of rigid foam and nailed them to the roof rafters as rails for our inside air channels. 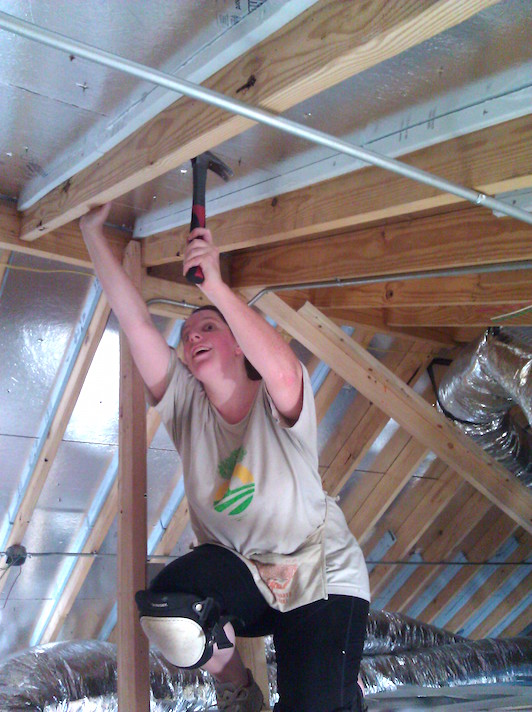 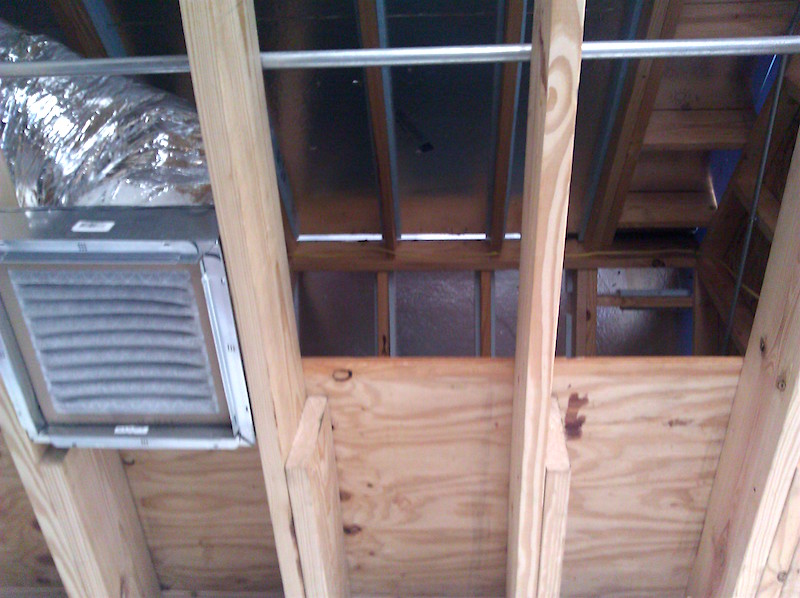 Then together we cut other pieces of rigid foam to fit up against those little rails. This would allow the air about a one inch space to move along as it headed up and out the ridge. When we finally put in the finished foam insulation, this attic will be completely encased with really high R-value foam, but this 1″ gap will continue to channel air away from us. So we will have an enclosed attic envelope and a breathable attic space all in one. 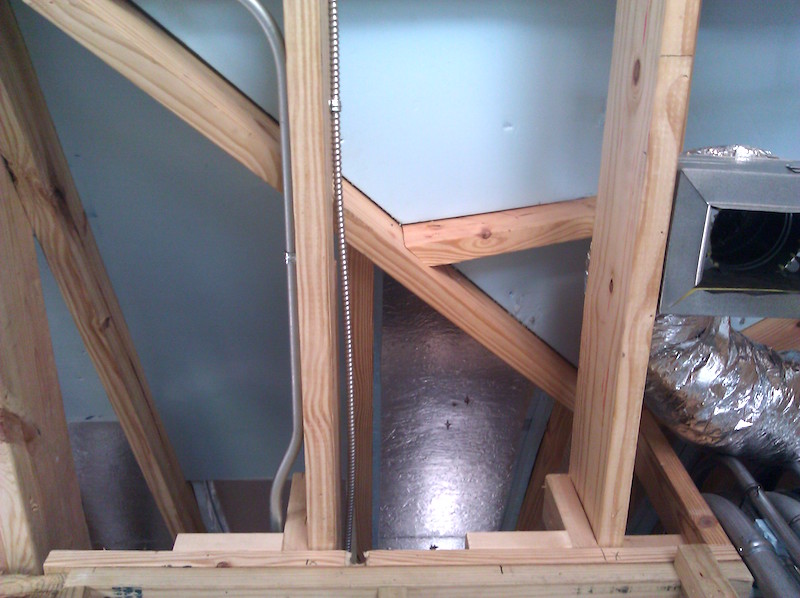 With this rigid foam in place, we finally had a fully enclosed house. Errek also cut little blocks of wood and fit them in place between the roof and walls so that the foam would have something solid to sit on at the base.

Kinda neat, right? Right? Just say “right,” so Errek doesn’t make me bust out the diagrams on you. Also, I’m ready to move on to the way prettier, and 100% more satisfying part of this story — the siding.

Now, with the skin vent done, we were ready to put the siding on the walls. We had big plans to put all of our siding on right after Christmas, but as is always the case with this beast of a house, we were WAY WAY WAY behind schedule. It wasn’t until Memorial Day weekend that we were able to get SOME of the siding up. The west wall, well, most of the west wall.

We picked the west wall because it’s our mechanical wall, and we needed to move the water heater over there in order to get plumbing done. It didn’t hurt that it’s also the wall which gets the most sun exposure.

To start, Errek whipped out the paint sprayer and painted everything with a primer coat. As long as it takes us to get things done, it’ll be five years before we get the finish paint up, so we decided to prime every board front and back before it even goes on the wall. 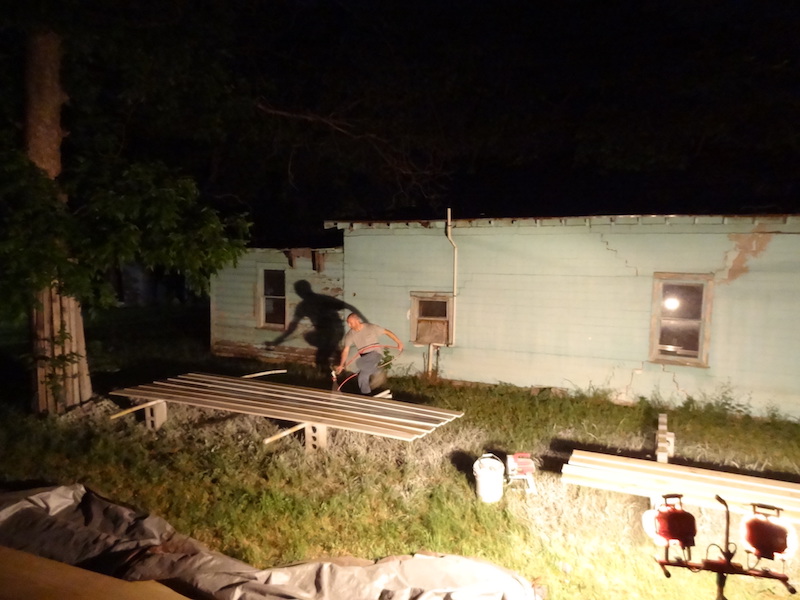 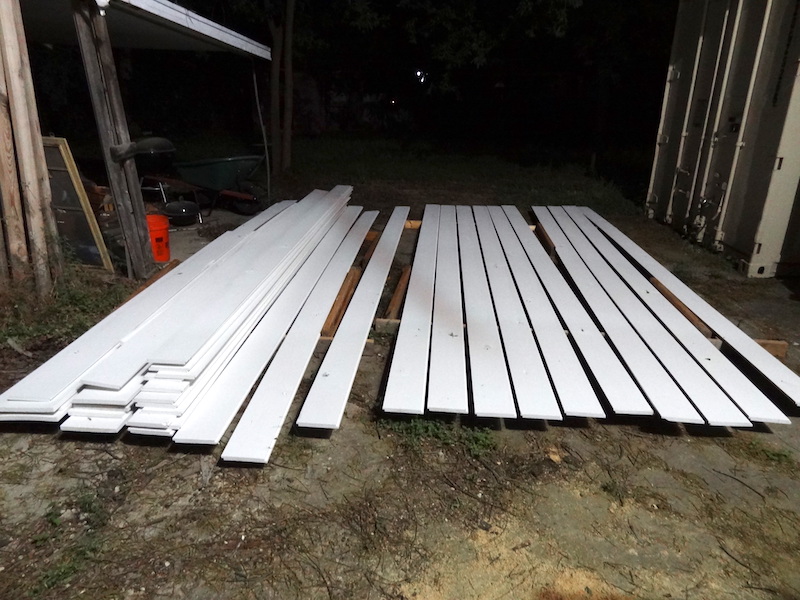 The grass was less of a fan of the prime-every-board-before-it-goes-on-the-wall plan. 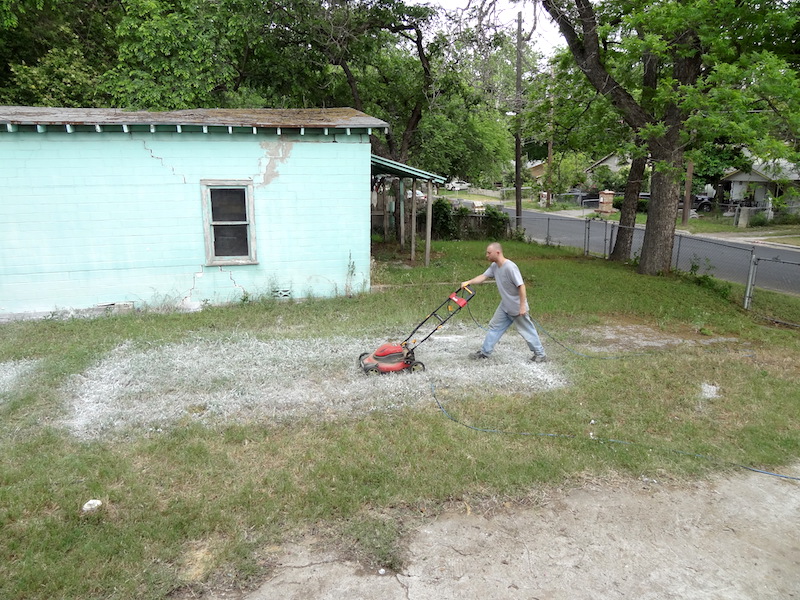 First up we put the ledger board and waterboard. That’s right, we waterboarded our house. Er…okay, apparently it’s called a “water table” not a waterboard, but darn it I really like the idea of torturing the house like it’s tortured us for all these years. Take that, house, payback’s a bitch, ain’t she? 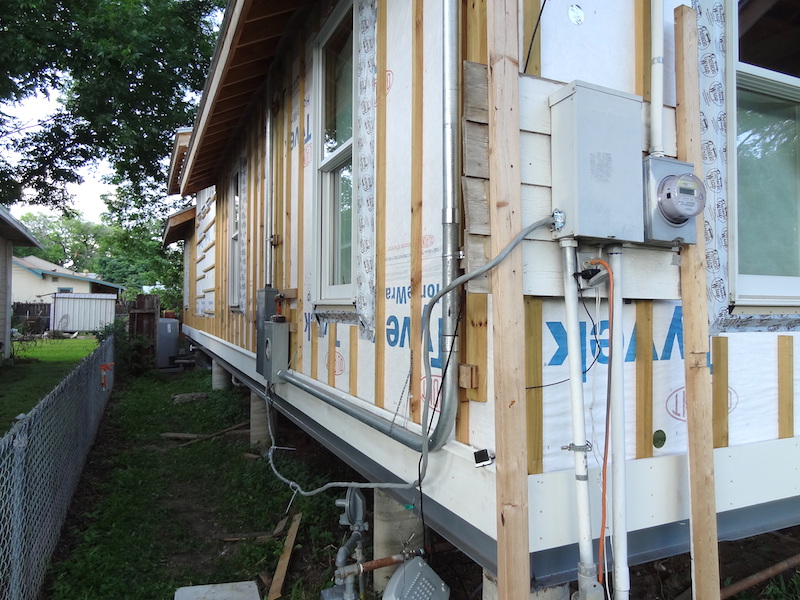 Alas, no, we’re still the ones getting tortured. Look, that’s my blood! Mean house, why you gotta be hurtin’ me like that? 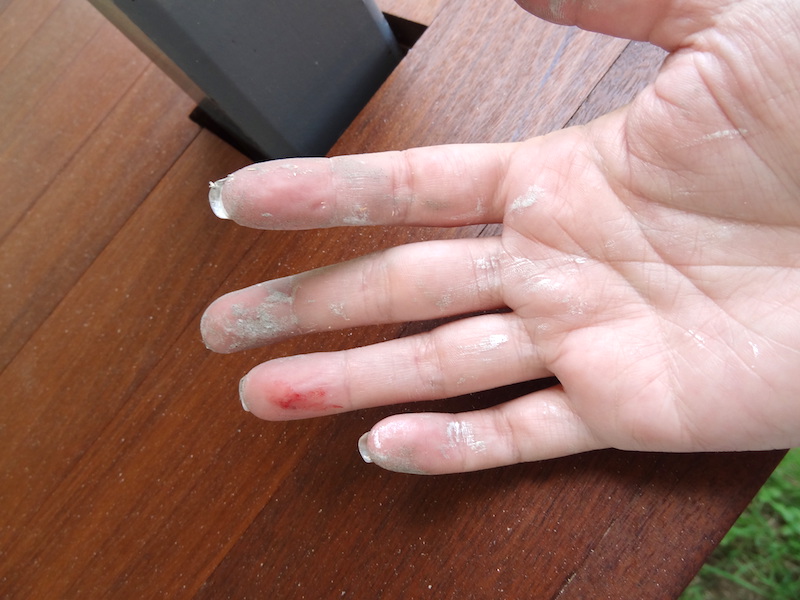 But it’s not all about me, check it out, walls are going up! 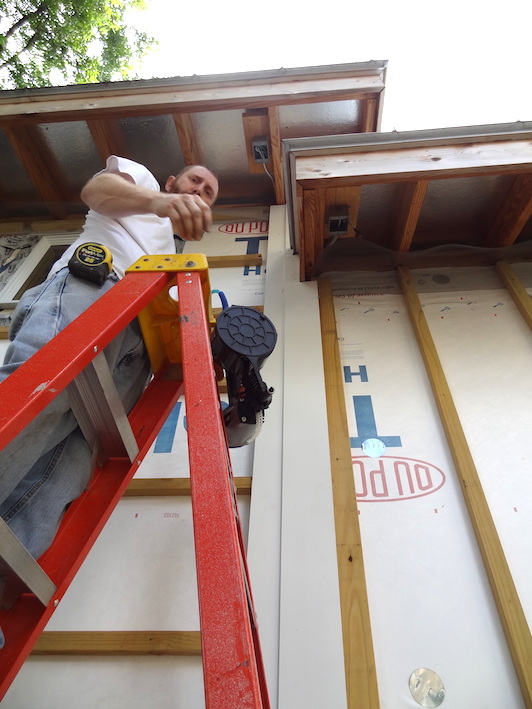 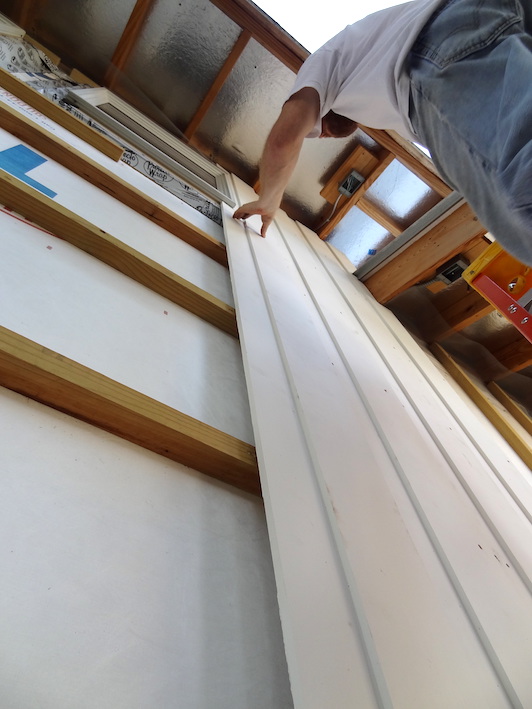 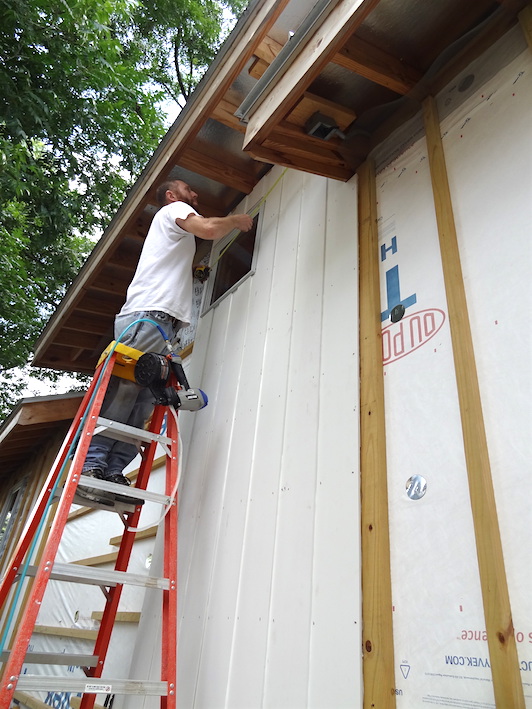 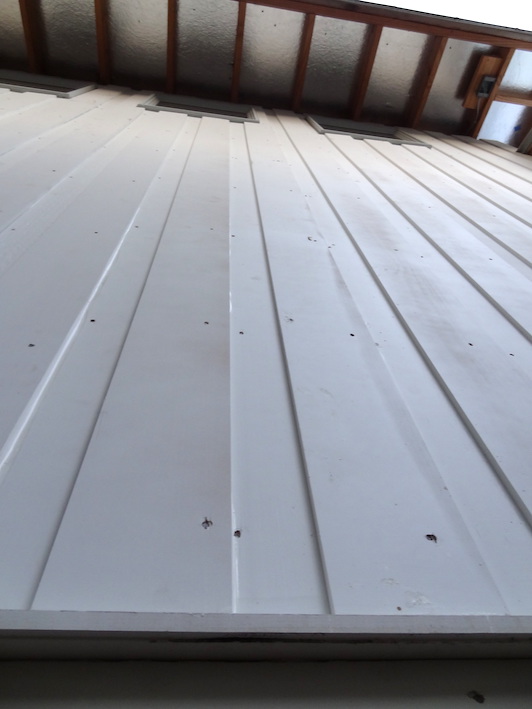 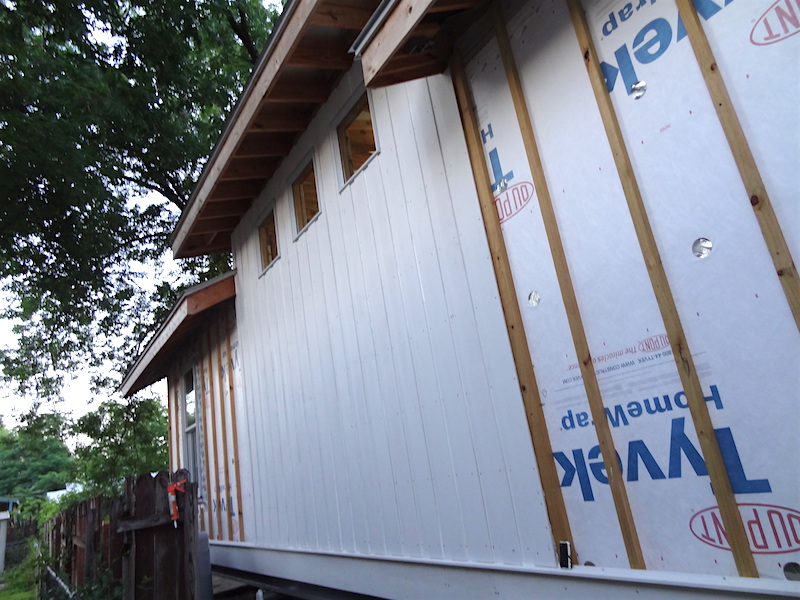 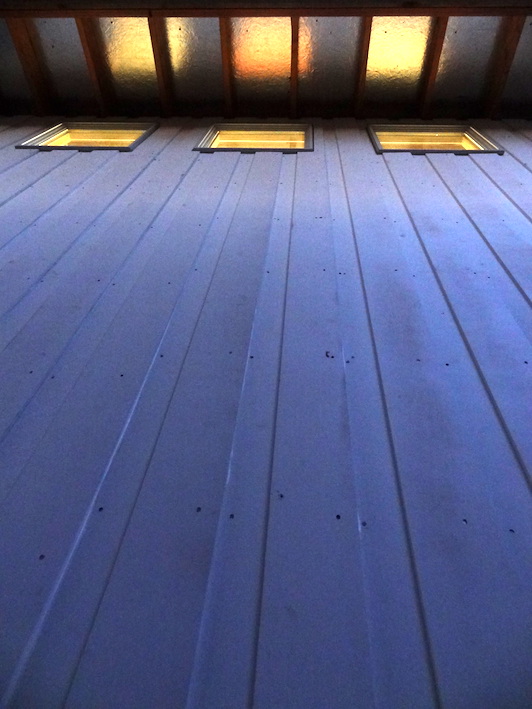 Kitchen’s done, and ain’t she a beaut? Next up, the living room. 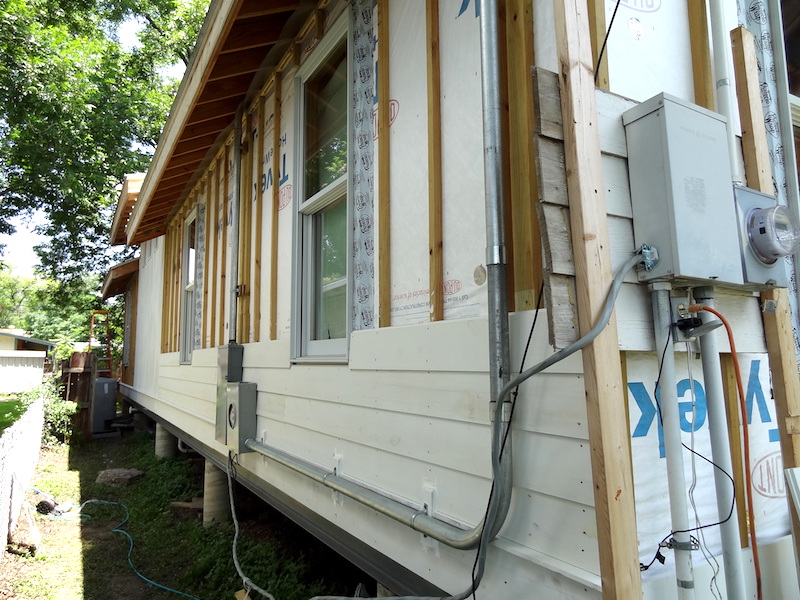 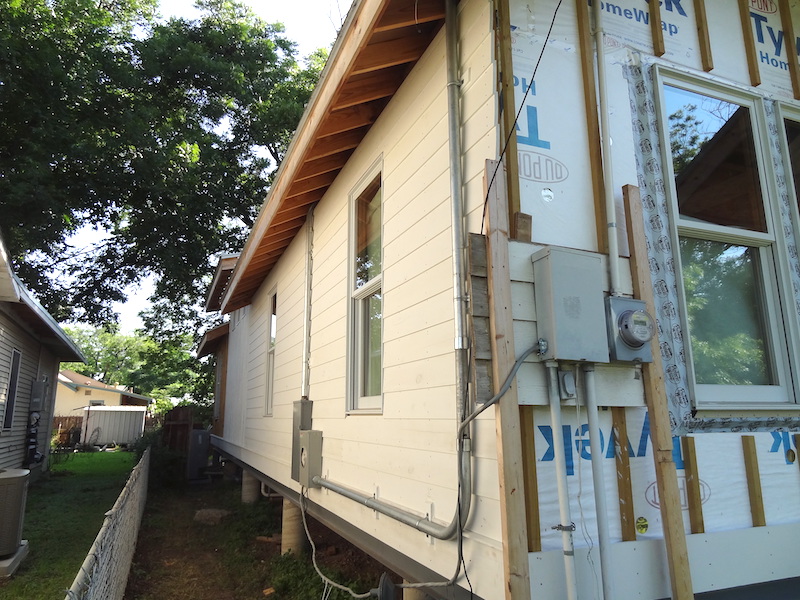 Unfortunately, we ran out of weekend before we could get the breakfast room wall up, but we did get the front wall ledger board up and look how great it ties in with the porch. 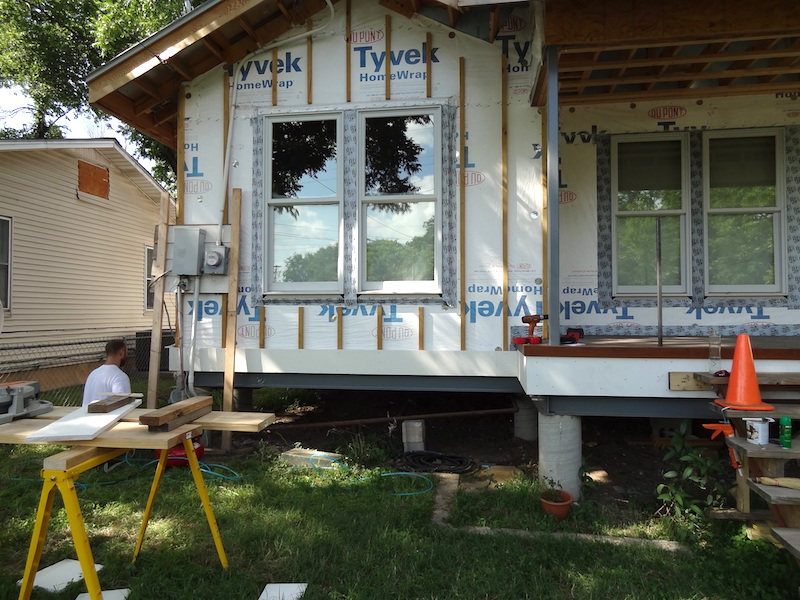 He. Hehe. Yeah, did I mention that I’m sort of telling that part of the story out of order. I’m saving the best two “wins” for last so we can all do cartwheels of excitement at the end.