Chapter 74: Our West Side Story

Wow, it’s been almost a year since the last update. Dang, I’ve been laying down on the job.

But, during that time progress slowed a bit. Errek went back to his day job, so he was having to fit house projects in where he could, and considering he’d been working a lot of hours, that meant he could fit them in at half past never o’clock.

Also, during that time we were both hit with a bad case of “Meh-itis.” Never heard of it? Well, the general symptoms are annoyance, irritability, malaise, and frustration. It can affect anyone, but generally strikes its victims at about the seventh year into a major home remodeling project. That’s right, we were feeling the seven year itch with this bitch. But, seriously, Errek was sick of always having to work on the house, and I was sick of always having to live in a half finished project. It made us both cranky, but for opposite reasons, which was challenging to say the least. And it’s why the blog updates have been non-existent all that time. It just wasn’t as fun to talk about this stuff when I was struggling with meh-itis, but I would be remiss in my duties as bloggess if I didn’t cover it all – the good, the bad, and the ugly. Right?

No! No! No! No! No! I’m kicking the meh-itis to the curb right now in order to celebrate the fact that we have actually made some really great strides forward. I was looking back at how the house looked with the last blog update, and holy cow! You’ll be impressed with all we have pulled off these last several months. So, let’s get to it…

In order to combat our crippling case of meh-itis and remind all of y’all just how insane we are, I’ve written most (if not all) of this blog in a before and after style. Sure, our “after” is still technically “during” but we’re closer to after than we’ve ever been and it’s time to remind ourselves of just how far we’ve come.

Ready? Hells yeah, you are!

First, it’s time for our West Side Story (no, we’re not going to sing and dance) we’re just going to show you what’s been happening on the west side of our house (aka the living room, kitchen, and breakfast room). It’s currently the most complete, and looking quite lovely, if I do say so myself. No lie, every time I walk from the unfinished half of the house to the (mostly) finished half I sigh audibly. It’s like a weird romance. Like the walls are Ryan Gosling’s abs and I’m all, “Fuck!”

Oh wow, is that an animated gif of Ryan Gosling shirtless? Shit, I’m blogging like Buzzfeed. *sigh* Okay, where was I? Right, the west side story of the house.

So, once upon a time in 2006, Errek bought this place because we were looking for a fixer upper and I really liked the window screens. But inside the house was not ideal. Take for example this weird little wood paneled half wall which cut our great room into two mediocre rooms. 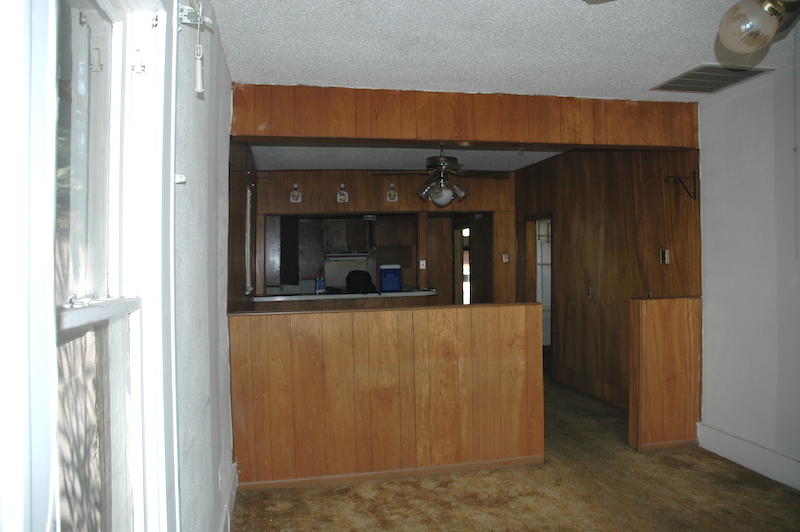 Or the seven foot tall kitchen, which wasn’t exactly our dream kitchen. 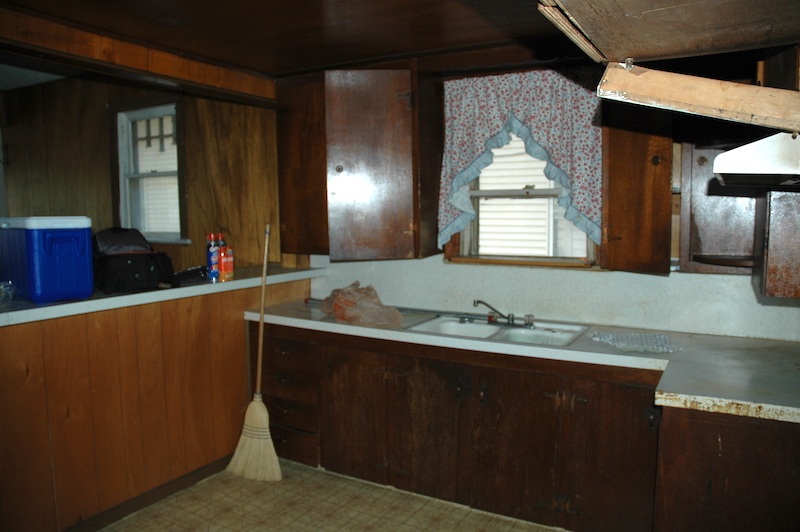 So what’d we do first thing after getting the keys?

Right. But after that, what did we do after that?

Oh, we tore that shit up! Gutted the walls down to the shiplap. 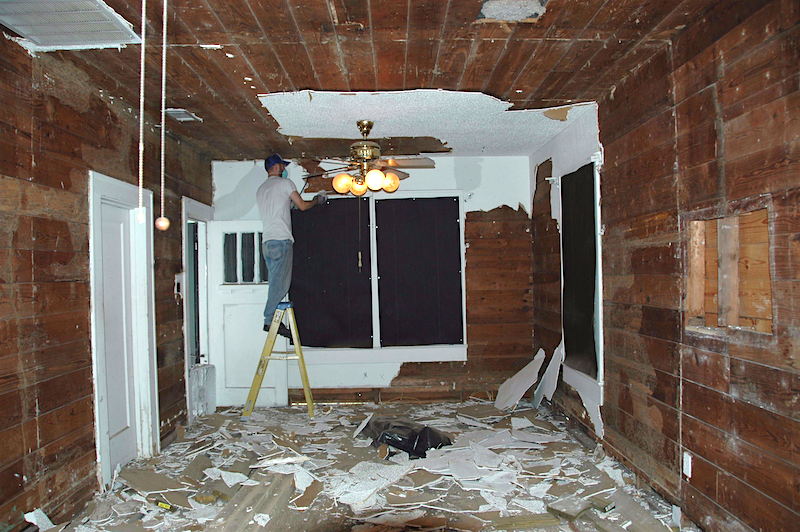 And the kitchen, well we walled it off and called it storage. 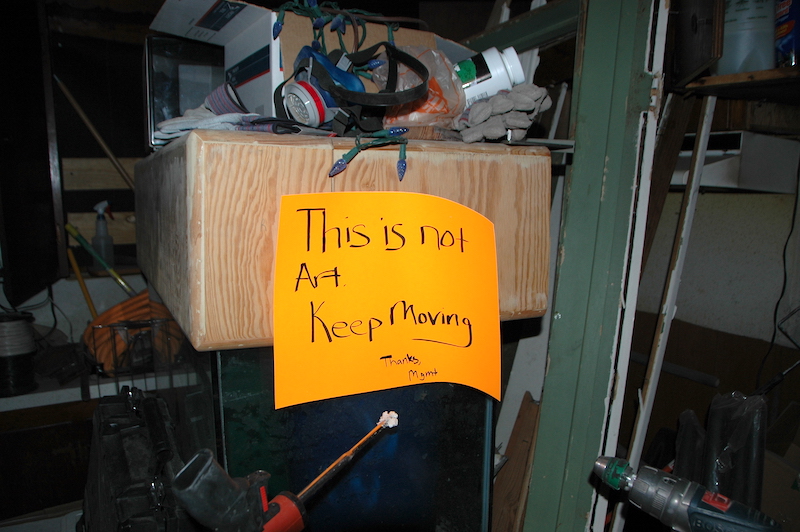 From there the living room went through a series of comfort level changes while we tried our darndest to live in the house while working on it. There was the igloo we built out of rigid foam to keep out the winter. 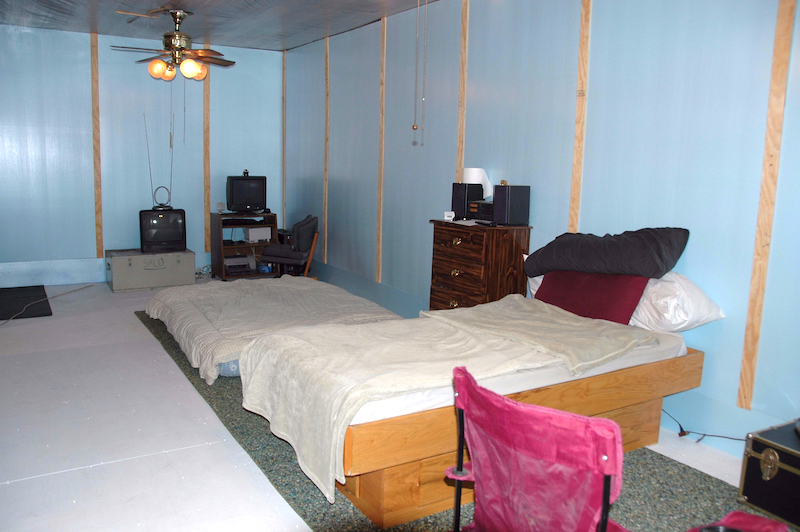 And the OSB we put up so you could lean on the wall and not fall through. 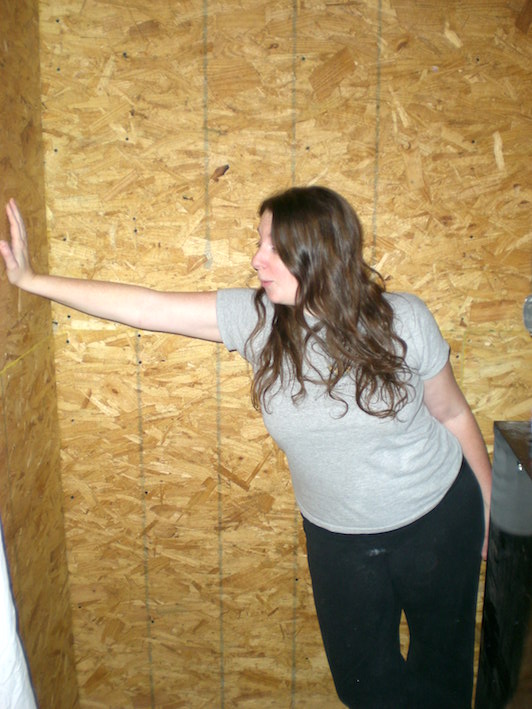 But, on New Years 2010, everything changed. We finally got our architectural plans approved by the city! You see, those first four years of construction were just the appetizer, now it was time for the main course. And the first thing we did was take a big bite out of the kitchen. 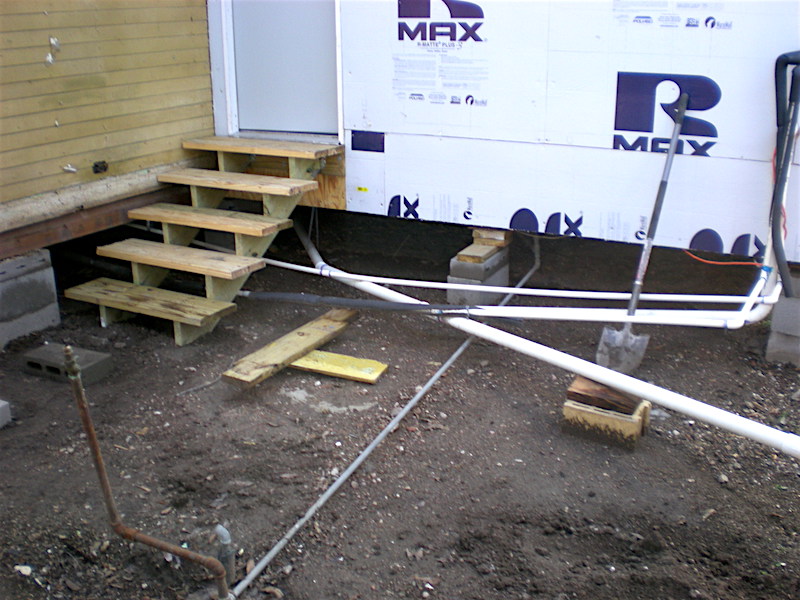 And then came the new addition. Poof! Kitchen be back! 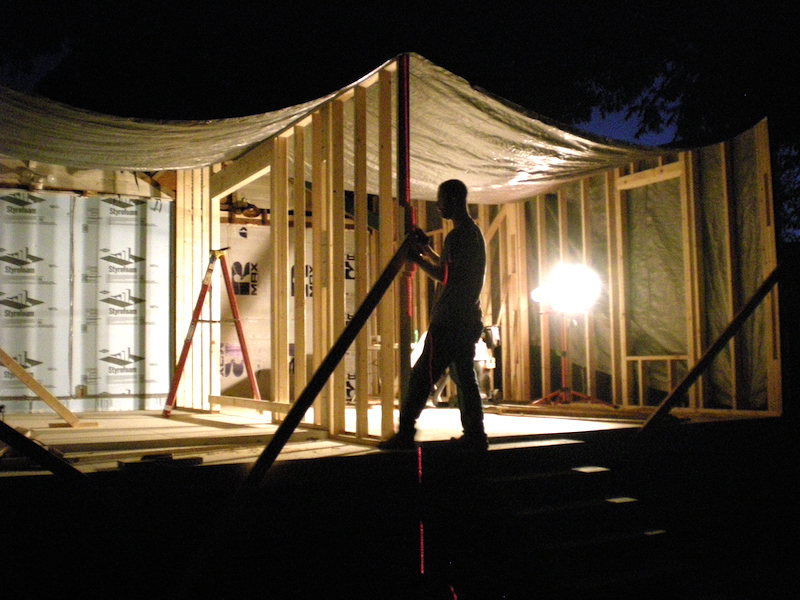 In 2011, we put actual walls up on the addition to keep out the uninvited raccoons and humans, and this allowed us to finally connect the two halves (the living room with the brand new kitchen and breakfast room addition). It was almost as awesome as when David Hasselhoff tore down the Berlin Wall with his voice alone. 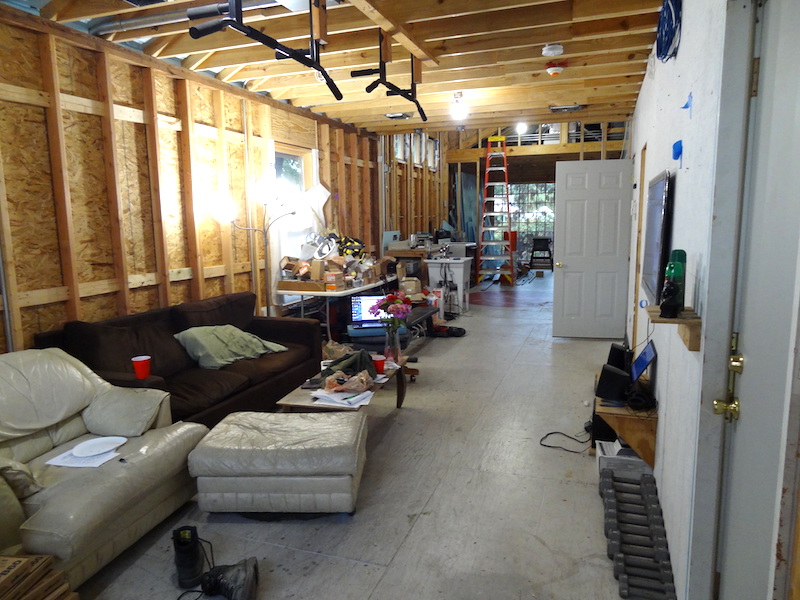 Of course, neither half of our little Berlin was insulated, so this happened. 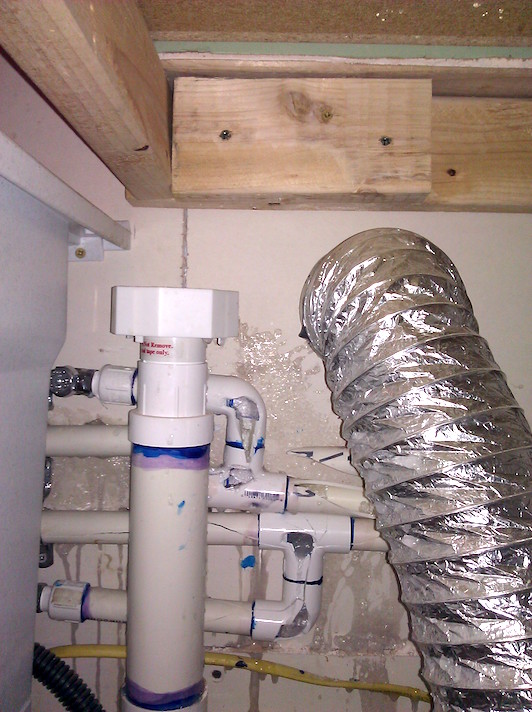 But almost two years later, in September of 2012, we finally insulated the whole house. And there was much rejoicing. Yay! 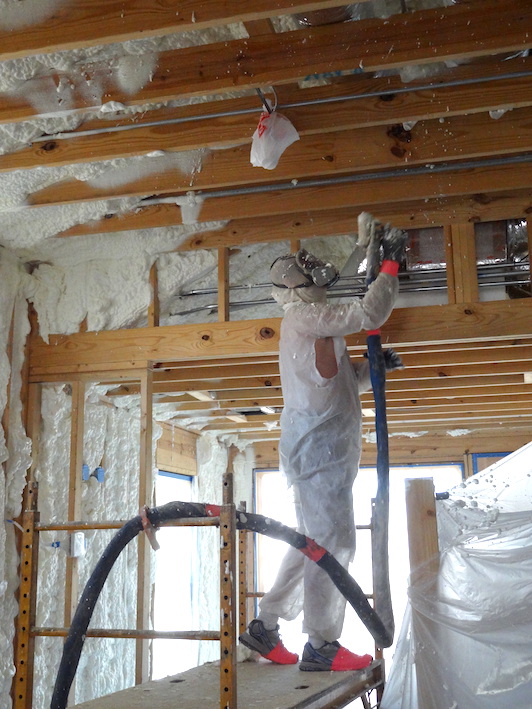 Then we put the drywall up. 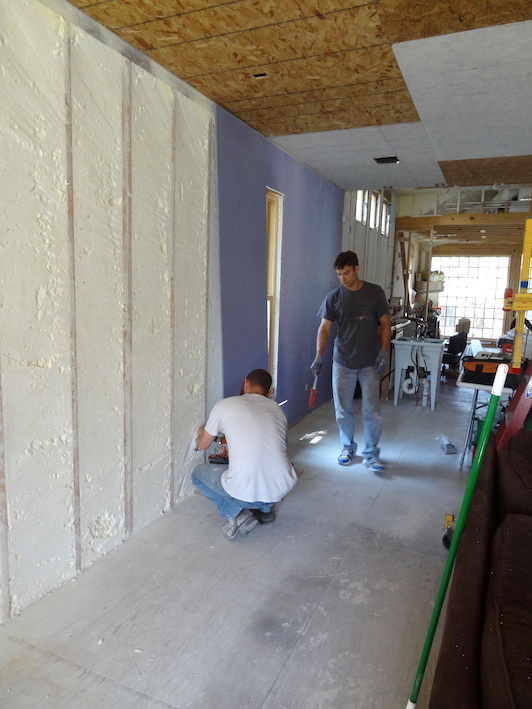 And this, my gracious readers, is where last we left you. So now, for the (almost) after photos.

But wait, first, we need to tape and mud and paint the walls. Piece of cake, right? Ha! Nope. See, we’re just scratching the surface of our madness. Brace yourself, because these walls are about to go through a vigorous facial treatment.

First, you must tape all the seams and then spread some mud on them. Okay, yeah, that’s pretty standard. 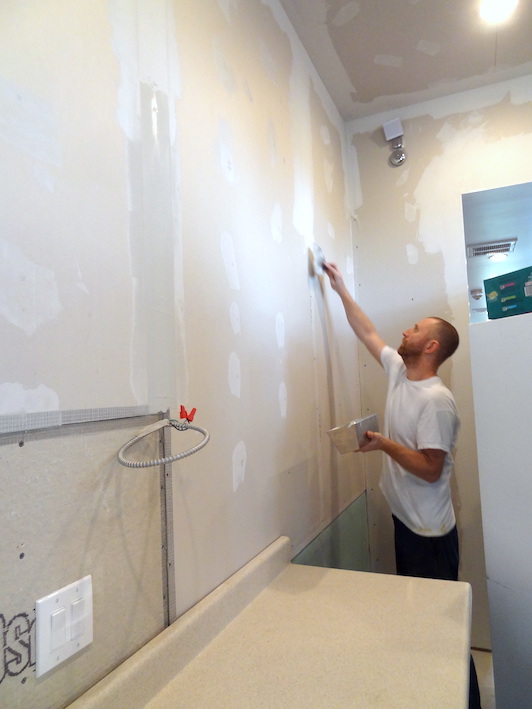 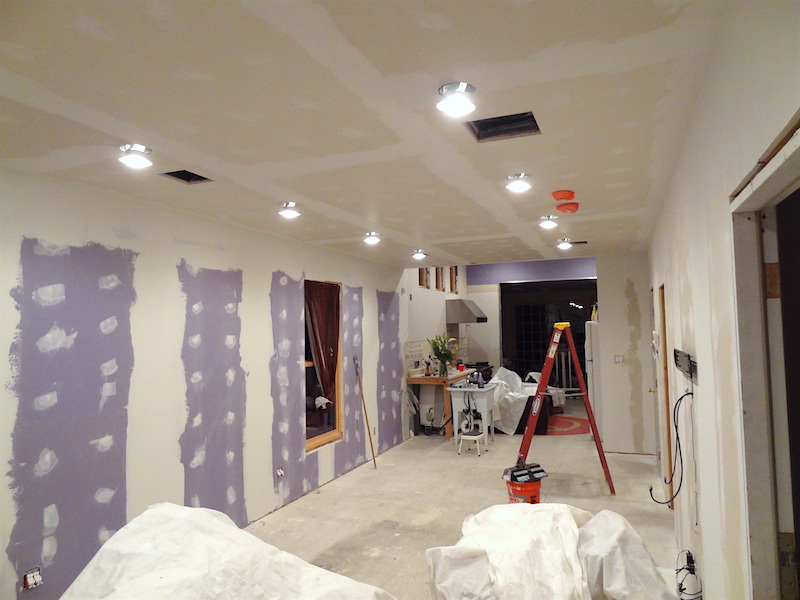 But Errek doesn’t stop there, no ma’am. Michelangelo here has to plaster the entire wall in order to get a surface he deems worthy of our house. 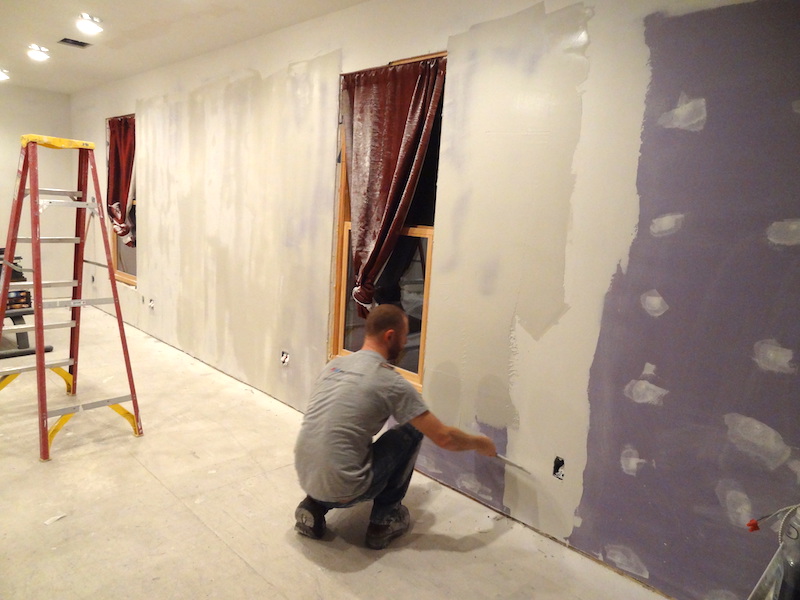 Then he sands the whole thing. 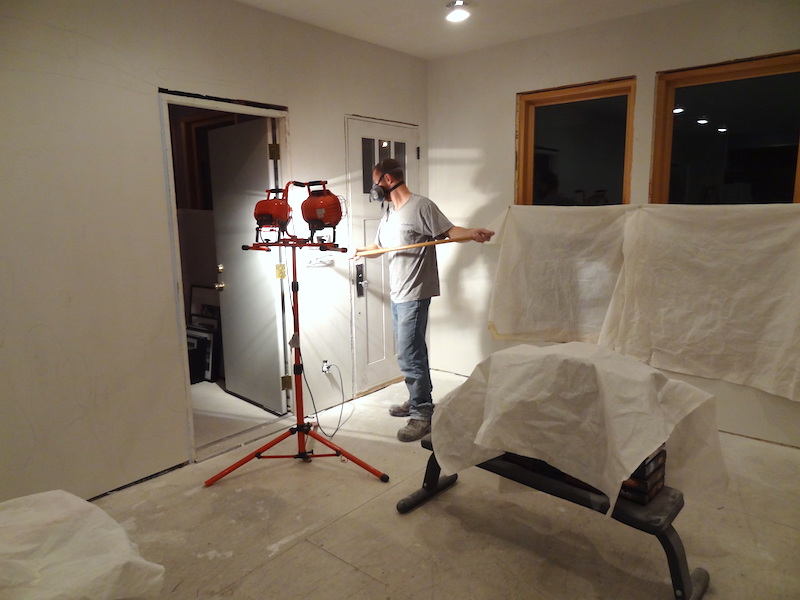 Then he scrutinizes the surfaces, circling any nicks or bumps so he can tend to them. 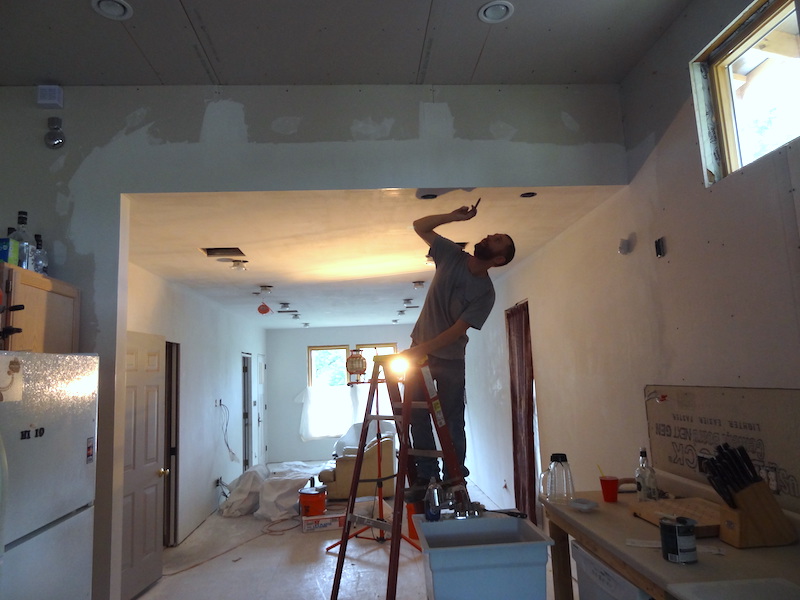 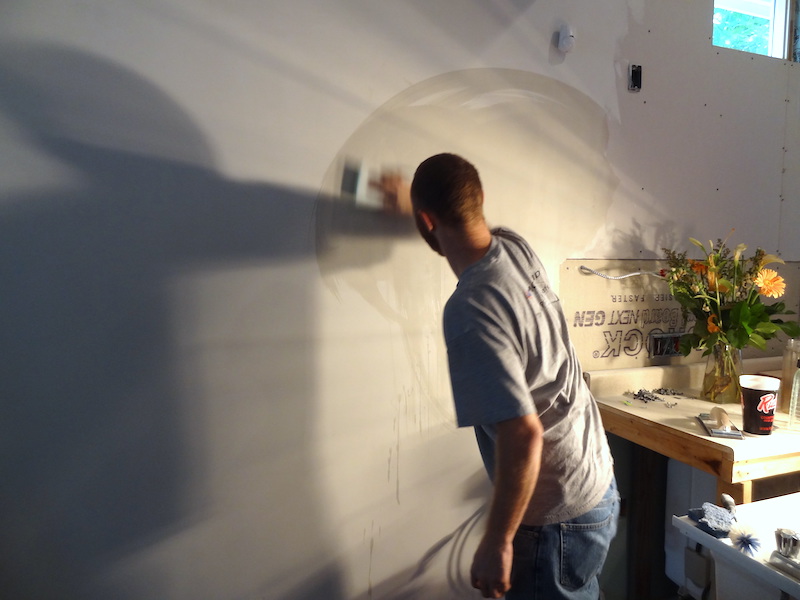 But I have to admit, when he’s done those walls look stellar. 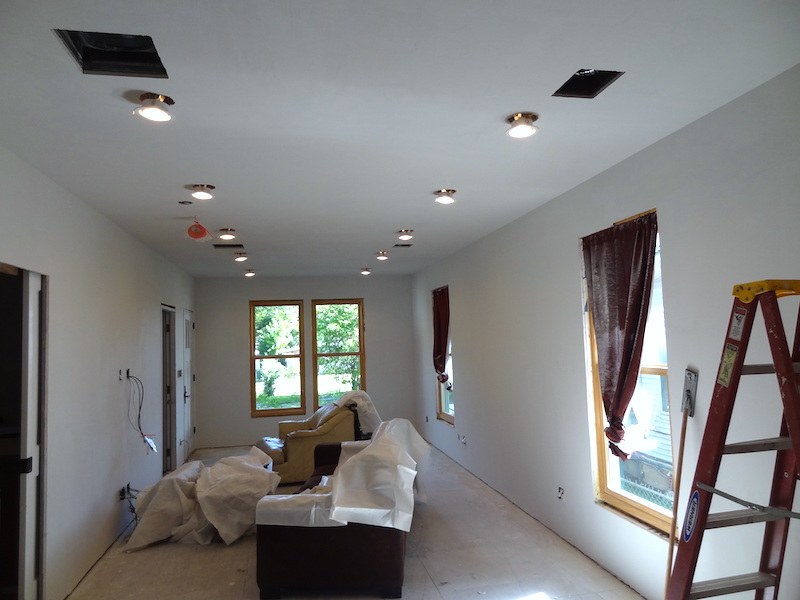 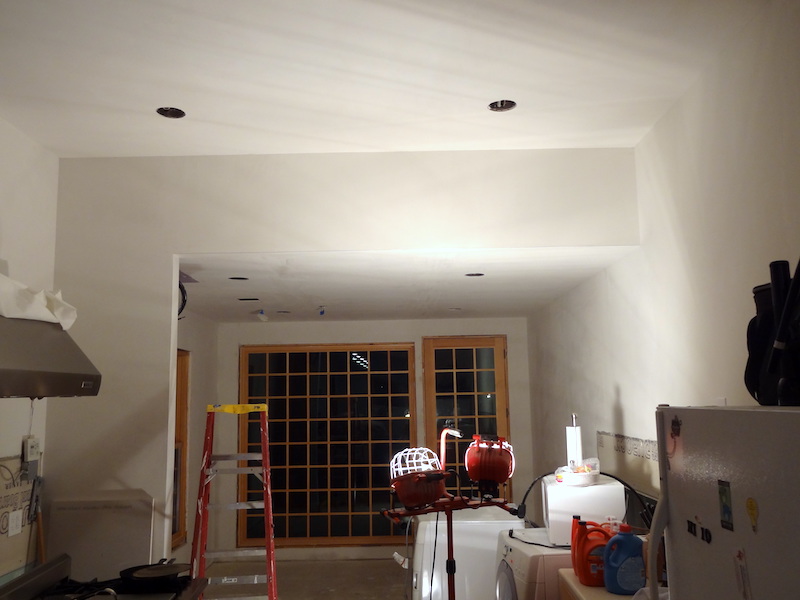 And now it’s my turn. Errek hands his precious baby over to me to paint it. Mwahahahaha! 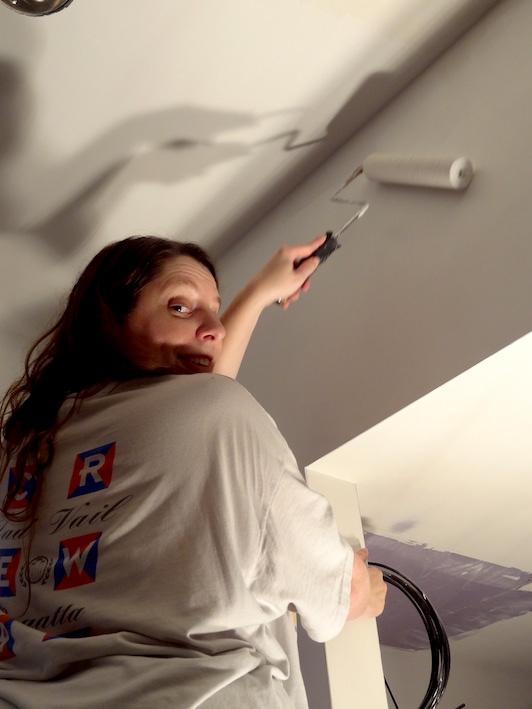 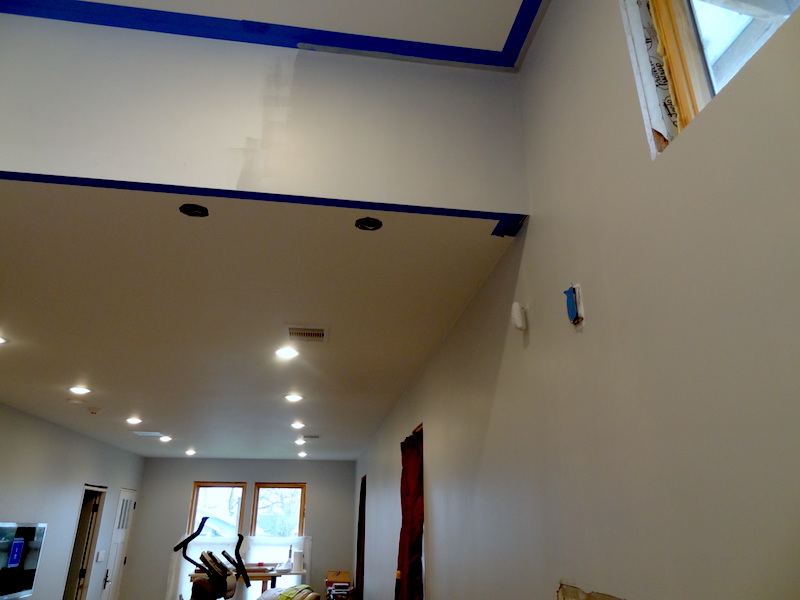 Paint and I have a love/hate relationship, and this time around paint became intimately familiar with my eyeball, further endangering the precarious peace accord between us. 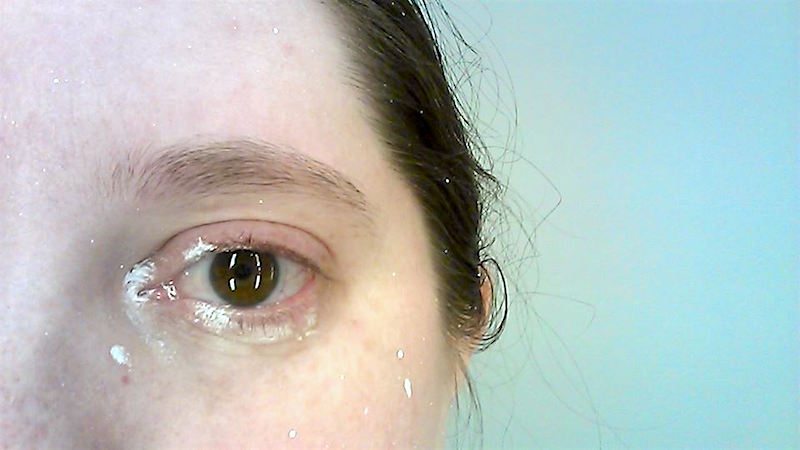 But, all that is so totally worth it when I come out of the bedroom and see those gorgeous walls.

I mean come on, you’ve got admit they totally look as good as Ryan Gosling’s abs, right? 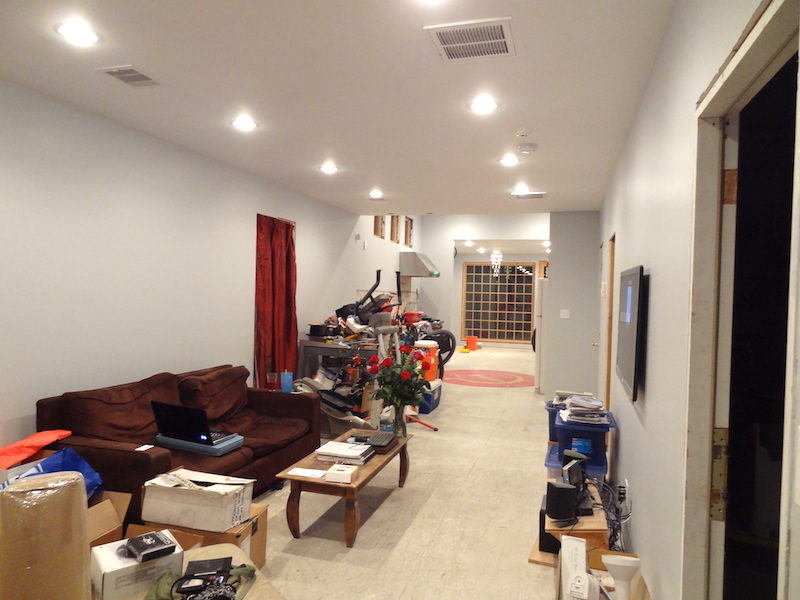 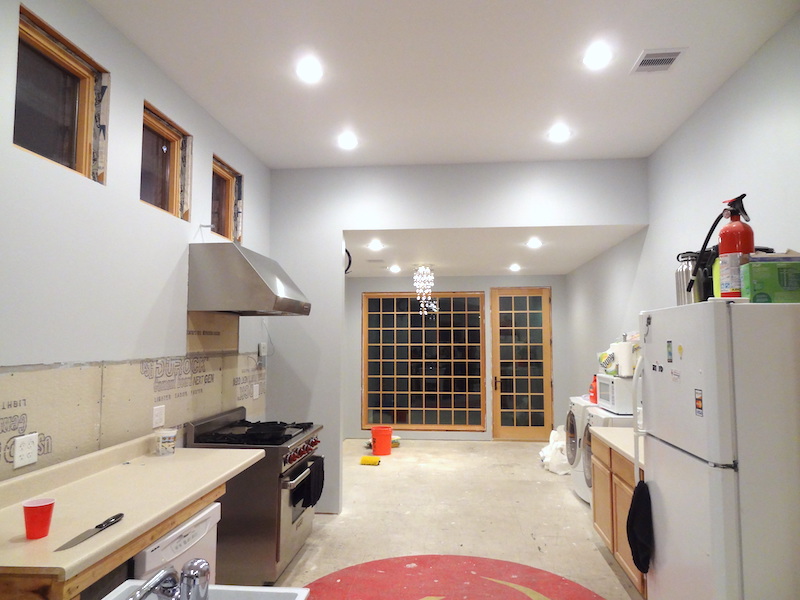 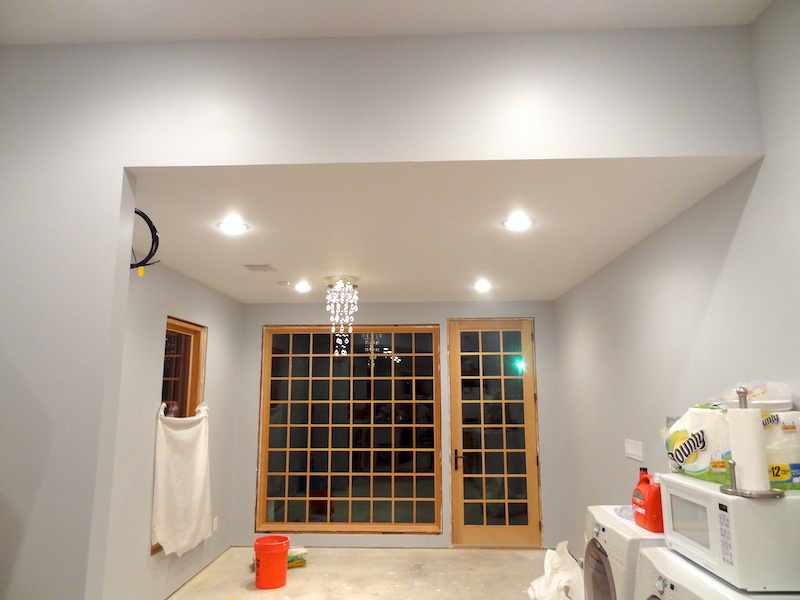 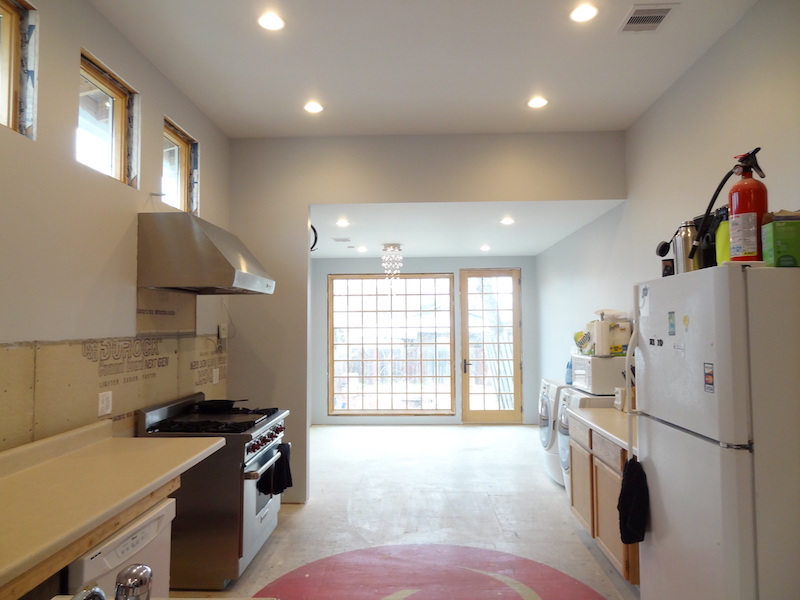 And that’s all we need!

Okay, so that’s where the west side story ends…sorry there wasn’t more singing or dancing. Since I so hate to disappoint you, here’s some singing and dancing.

Moving on. Now that you’ve seen the story of the west side, where the headline is, “How to Get Rock Hard Walls in Less than Eight Years!” it’s time for a little diddy about the east side.

That’s right, boys and girls, stuff is happening on that side of the house too. Wha? Yup. Woot. Behold…