As you probably know, or can scroll through prior chapters to find out, the master bathroom has been a work in progress for many, many…many years. For a long time it was just a bunch of stud walls where we stored old books and power tools. Then we ran plumbing pipes so that I could have my tub. 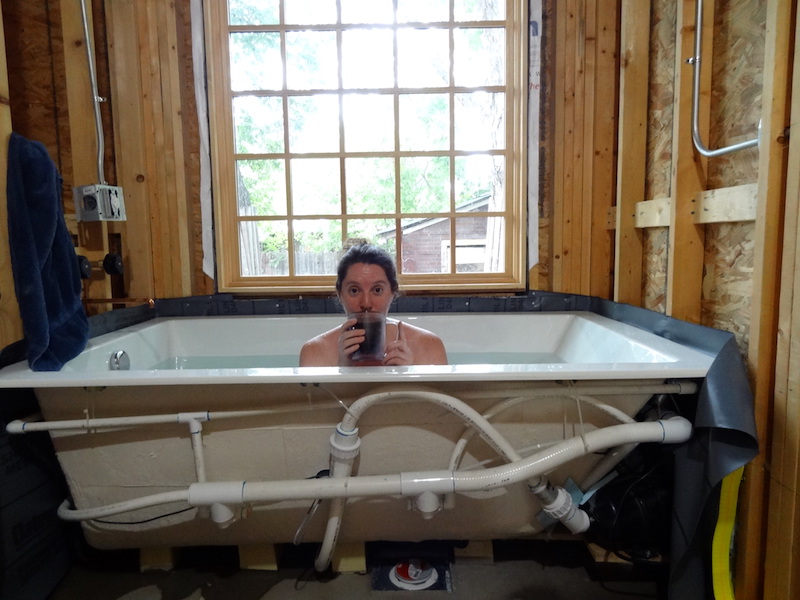 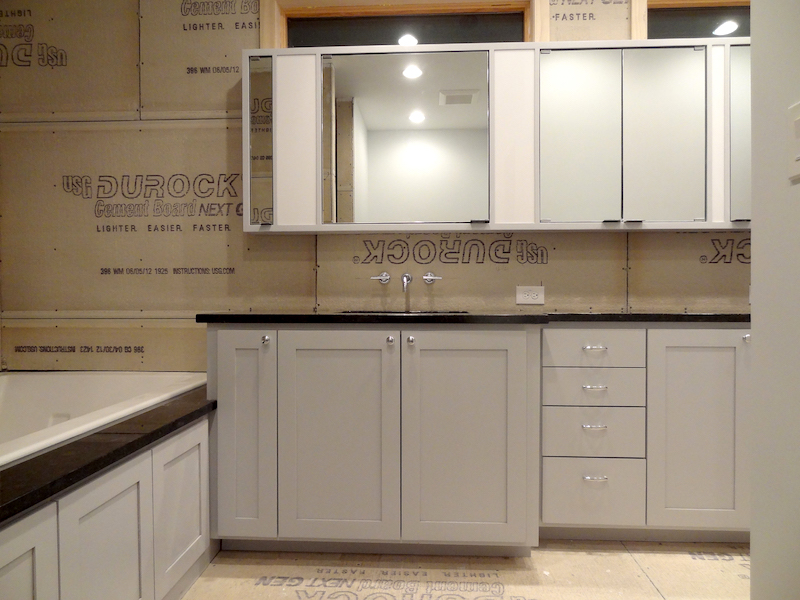 But the two things that every good bathroom has and ours consistently lacked were a toilet and a shower. Yeah, pretty vital stuff and totally contingent on one big thing, tile.

Well, finally, after a whole hell of a lot of ado, we bought the tile we wanted and got started on tiling the master bathroom. Woohoo!

First, Errek built the mud slope for our shower. 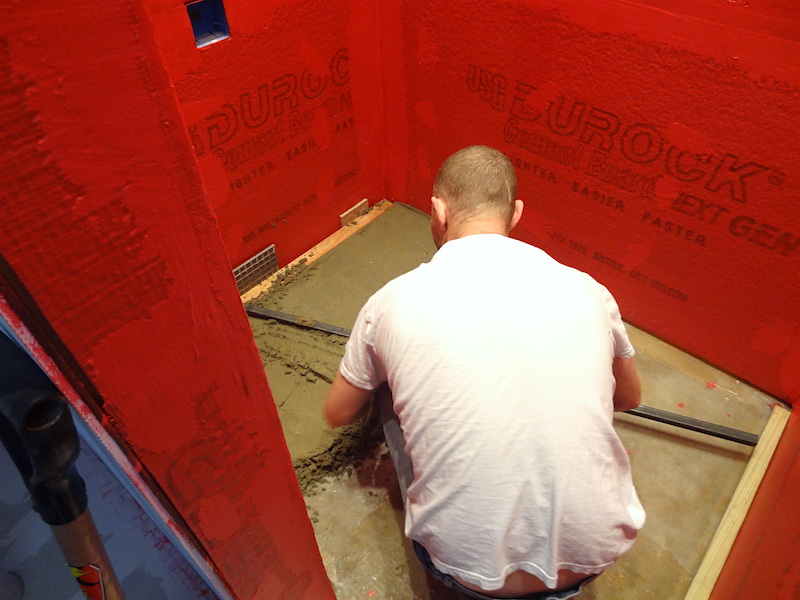 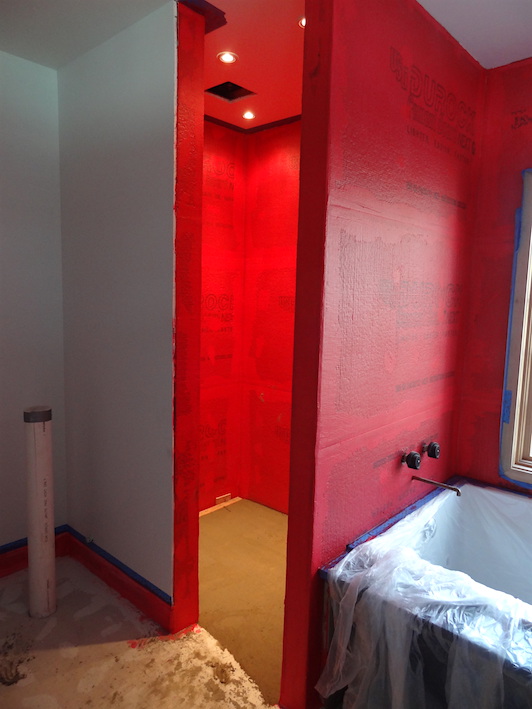 Then he laid a bunch of fiberglass and RedGarded it onto the floors. 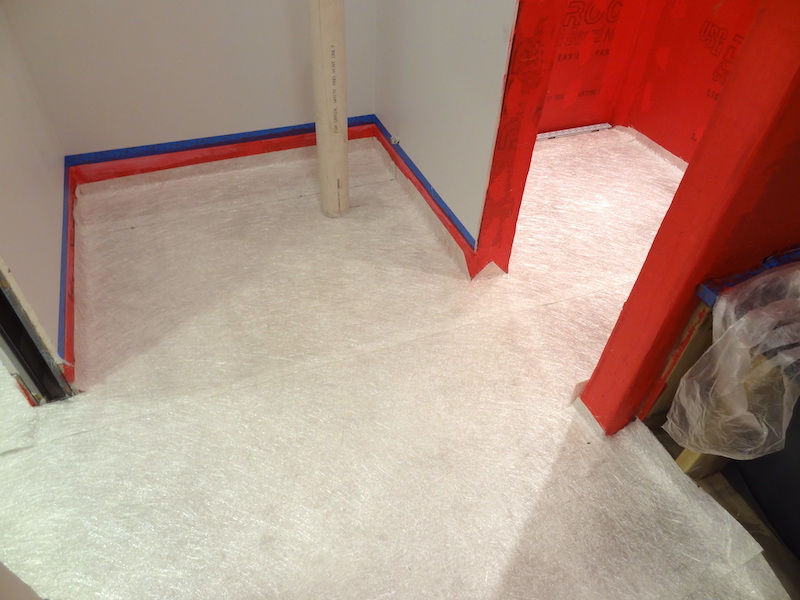 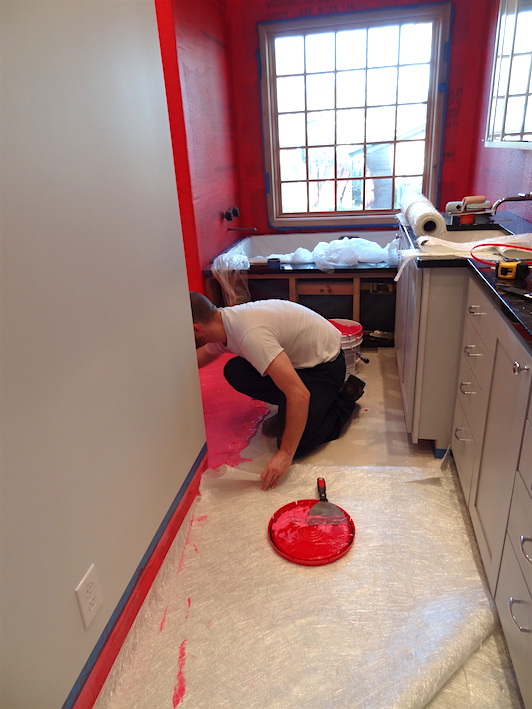 We got our friend Addam’s help to weld a frame for our trench drain. BTW, that’s a protective film over the drain. The finished piece will be stainless steel, not white. 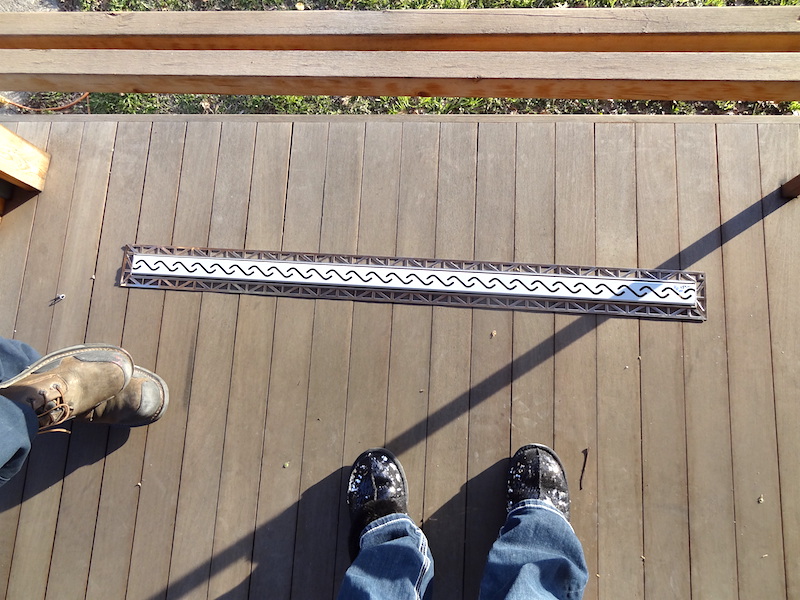 Then Errek dry fit all the tile for the floor. 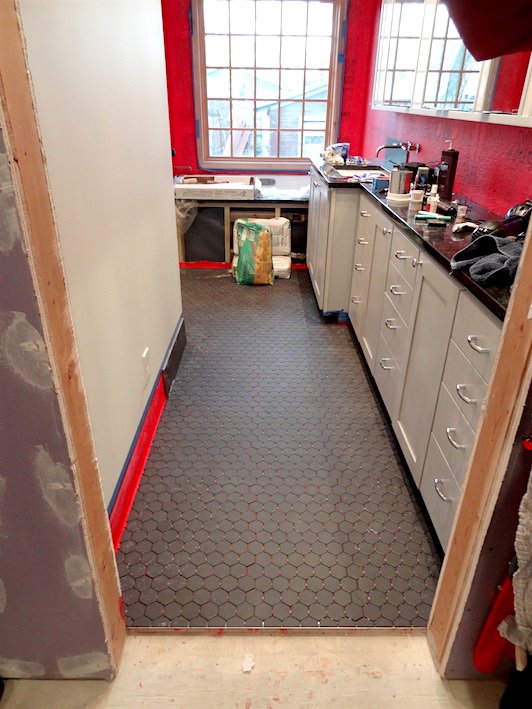 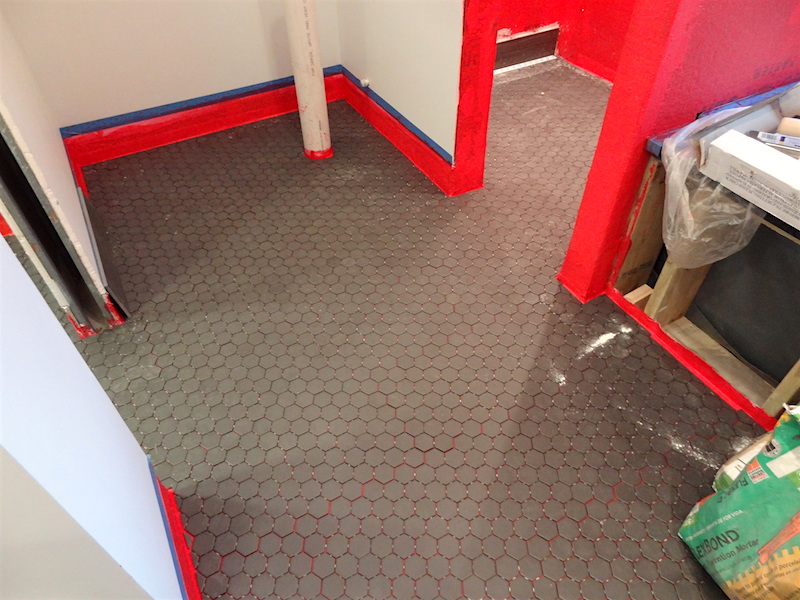 And finally, finally it was time to mix up a batch of thinset and stick those suckers down. 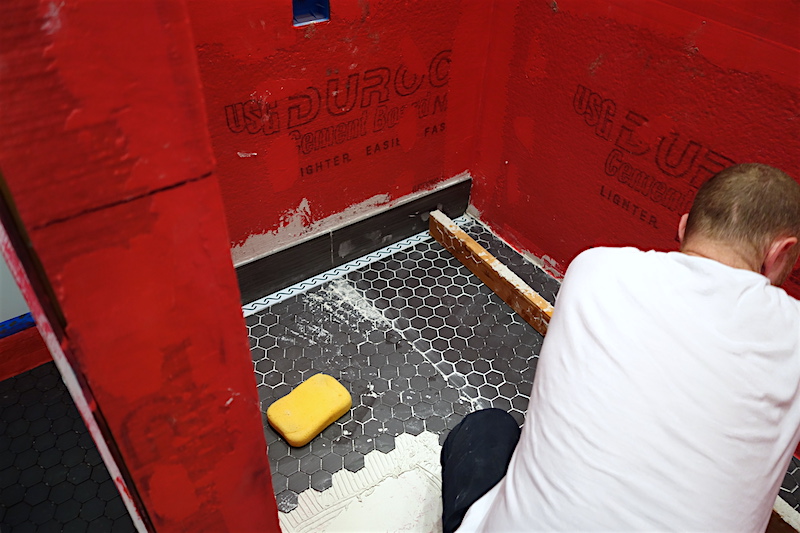 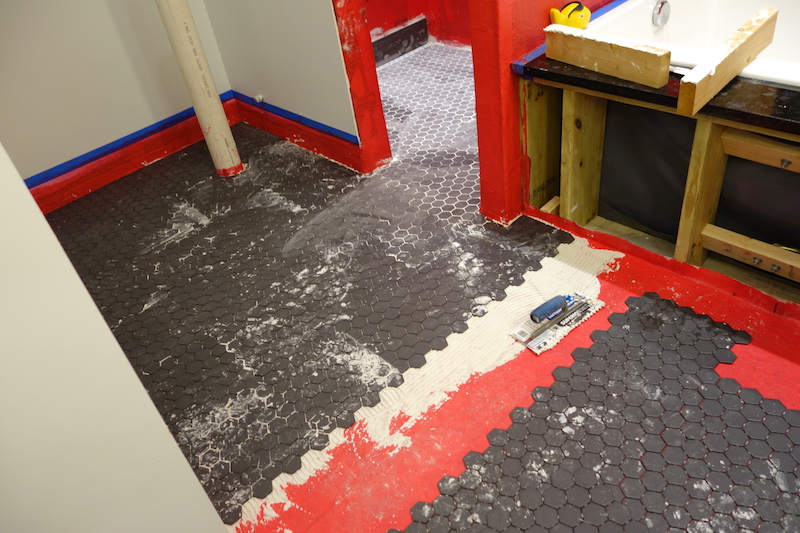 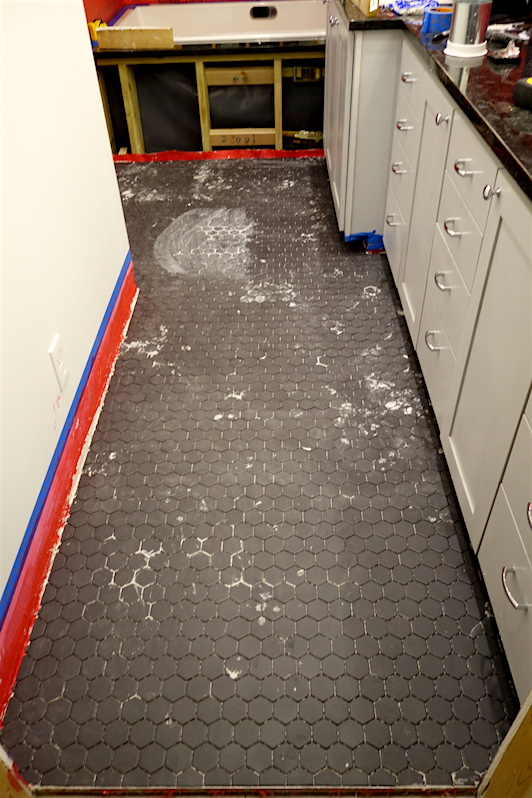 And then came the inevitable “Wait, these tiles didn’t stick down enough so now we have to pull them up and try again part.” Aka, the spirit breaker. 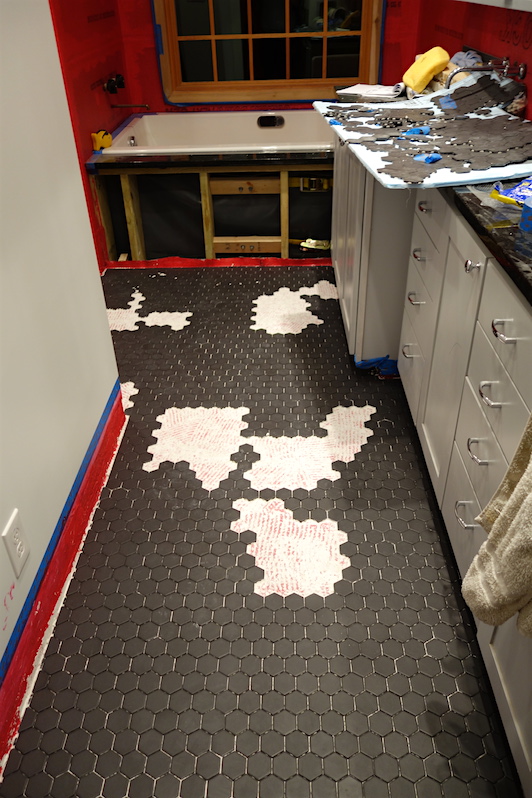 About a week into this spirit breaking portion of the fun and games, Errek and I were sitting on the blasted floor playing a game of Spin the Utility Knife, when I said to Errek, “Soooo, what would you say if I suggested that we hire someone to do the walls?” We’d bandied about the idea of hiring help a few times, but Errek’s control-freakiness never really worked in favor of that. 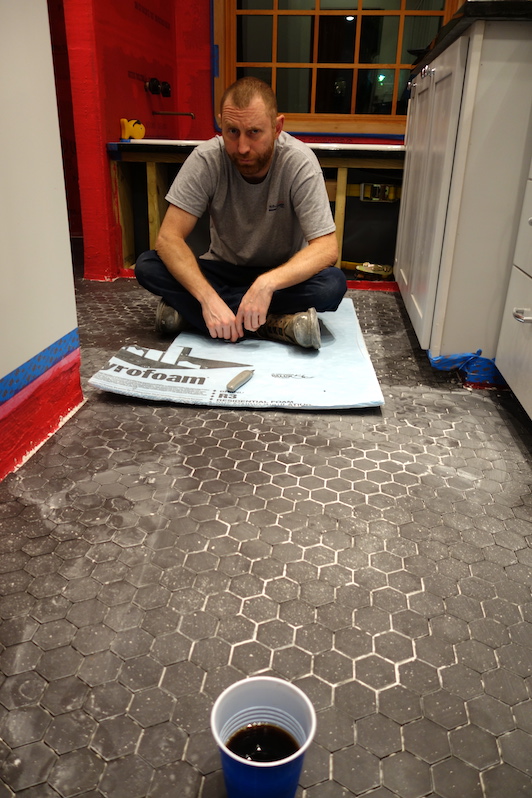 Errek looked up with his skeptically raise eyebrow, but when he spoke he said, “Maybe.”

What, what, what!?!?! That was almost sort of a yes. Holy shit, y’all. Apparently I’d asked at the exact right moment because yeah, wow. I jumped on it, talked to several tiling dudes to get quotes and then talked to Errek about all the pain in the ass stuff he wouldn’t have to do if we just got some help. Finally, he said yes and it was on like Donkey Kong, baby.

Enter Bluehammer, a company owned by our friend Corey. He and Matthew and the team did a great job on the walls and got it finished MUCH faster than we’d have been able to.

First, they put up the glass tile over the tub. Pretty! 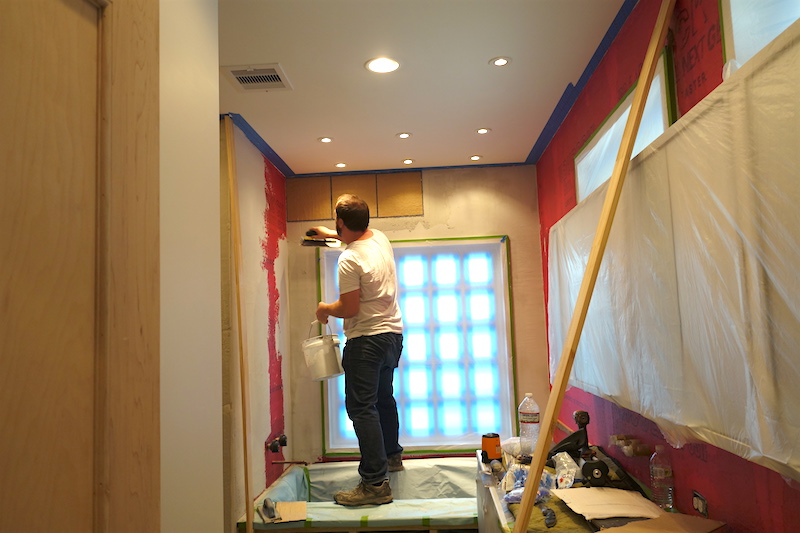 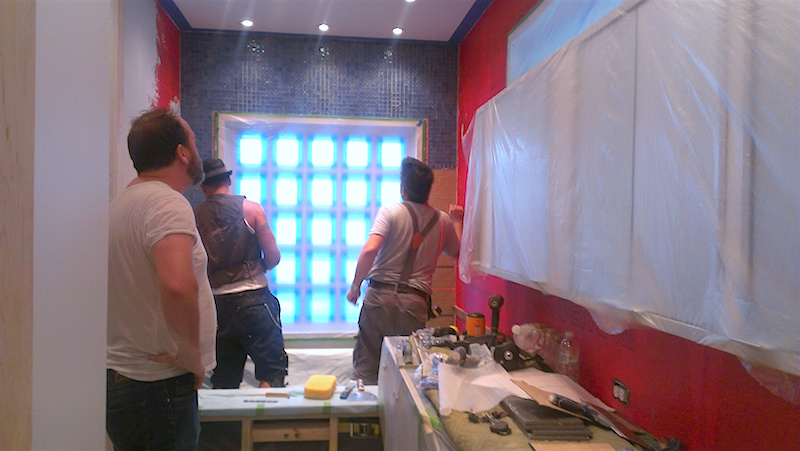 Next up, they put in the subway titles along the lavatory and tub walls. We had a special design request though, we wanted to put stripes of glass tiles between them. So the guys made wood spacers in order to get the exact fit every time. 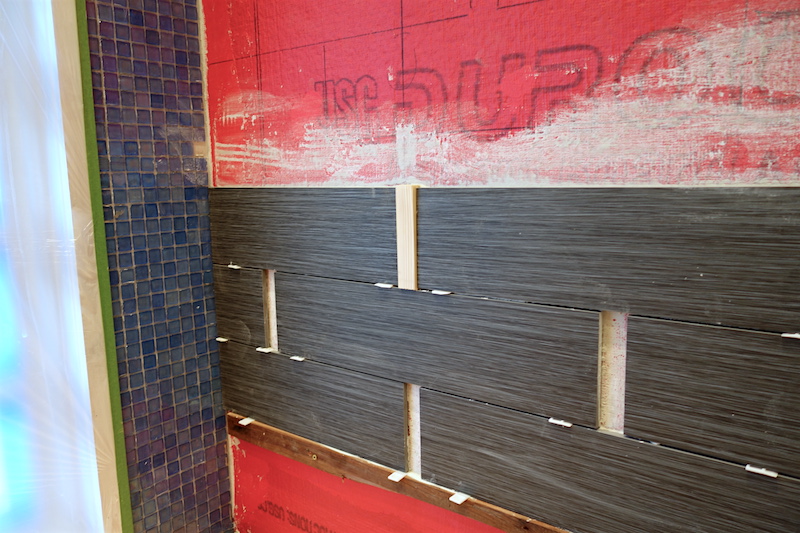 Then they hand placed the glass titles. Pretty! 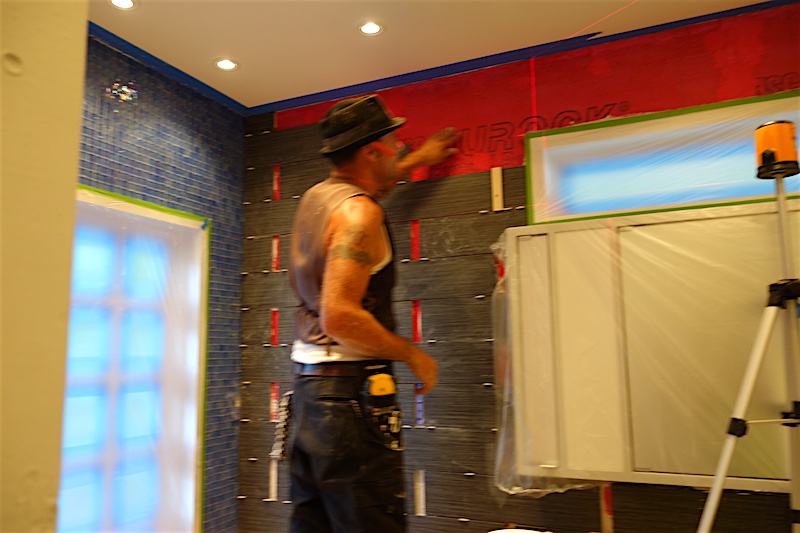 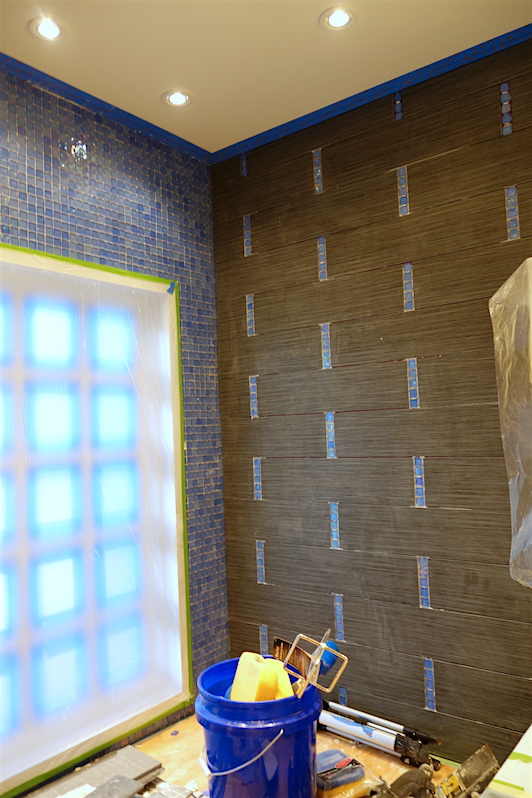 Look how the glass tiles bring out the blue patches of granite countertop. 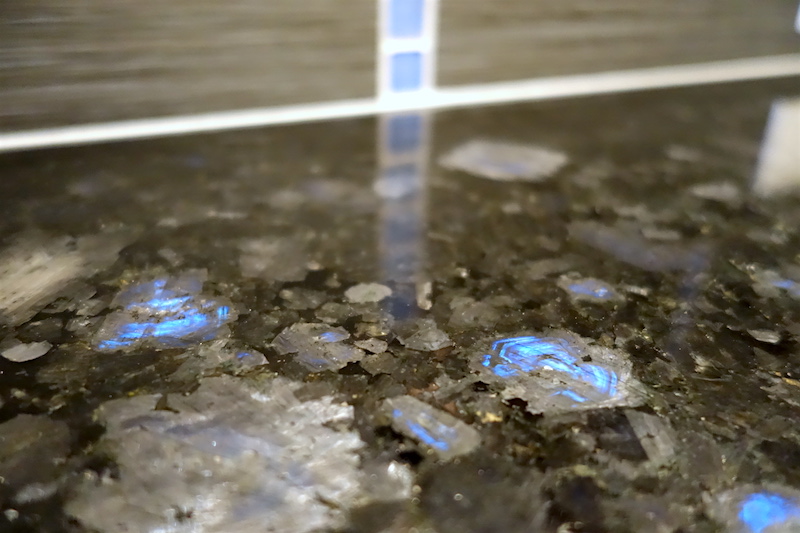 The shower also uses subway tiles, but they’re larger, and with no glass stripes. 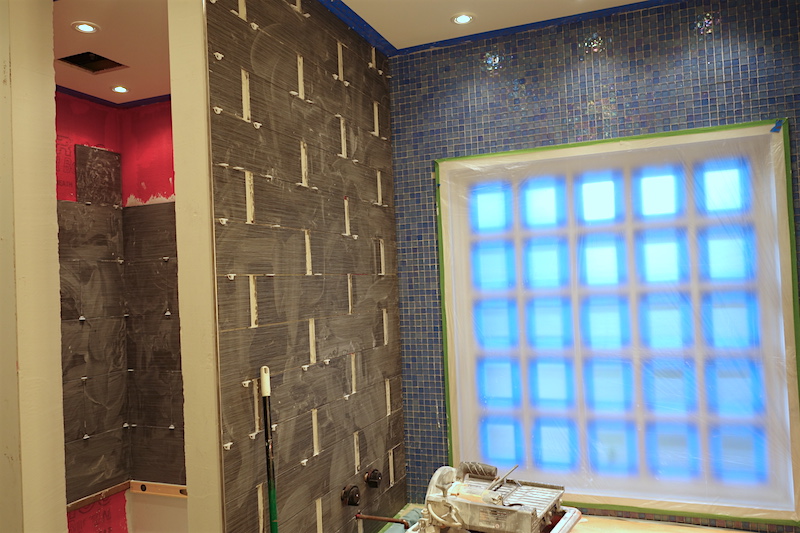 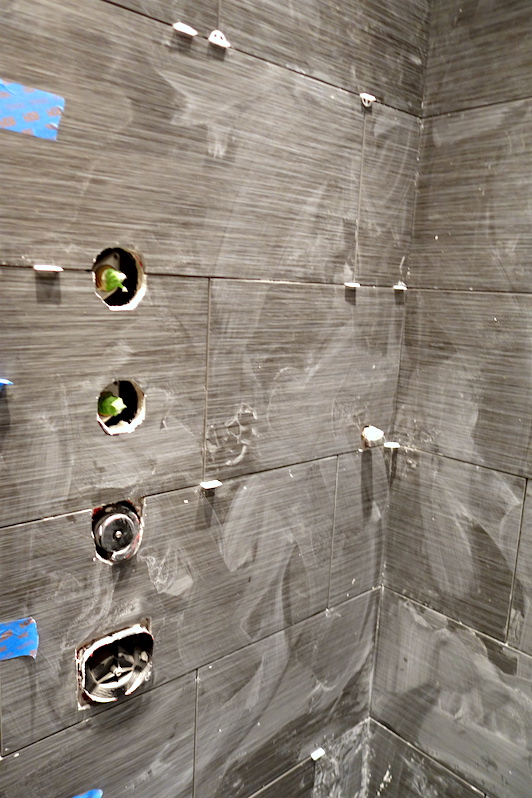 We’d also requested that all corners be finished out with metal strips to give it a more polished look. So all the outside corners and the baseboard feature that detail. 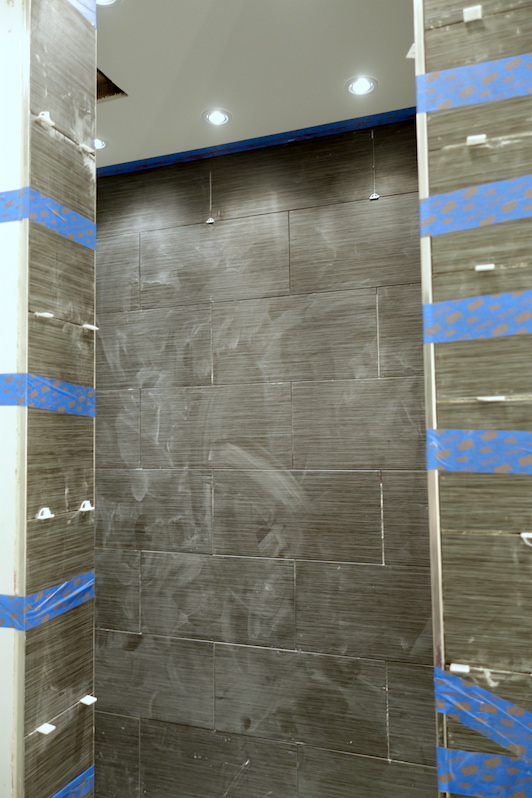 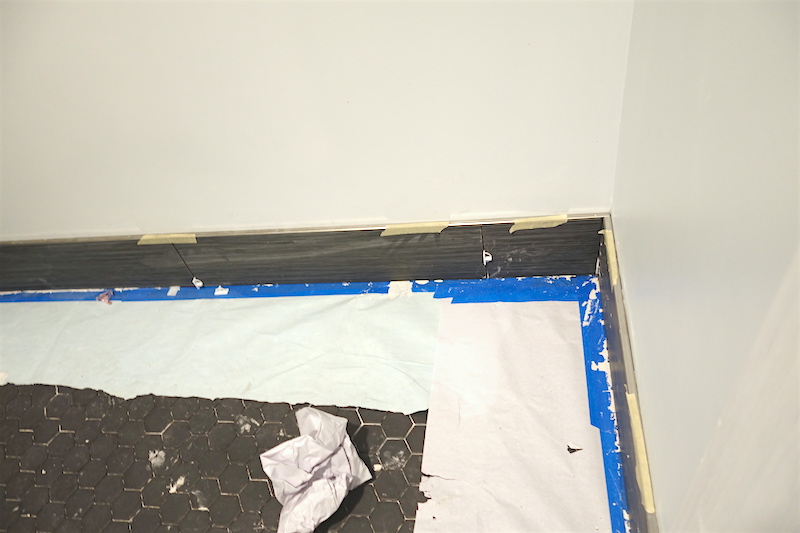 And finally, they grouted it. Yet again, we had a special request. They had to put down an epoxy grout which is a pain to work with, but crazy strong. And also, wait for it… Pretty! 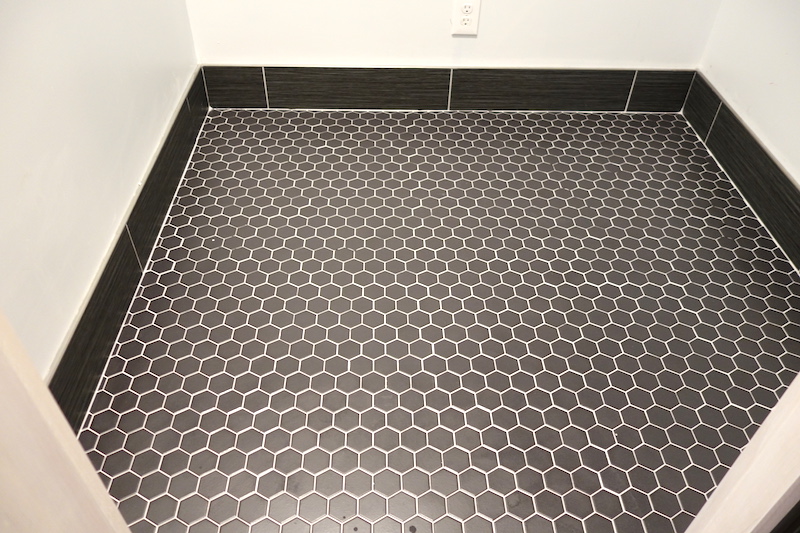 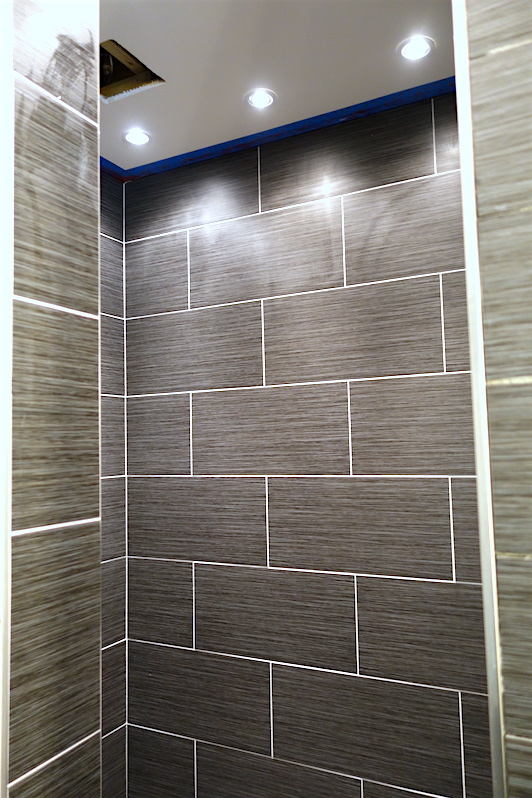 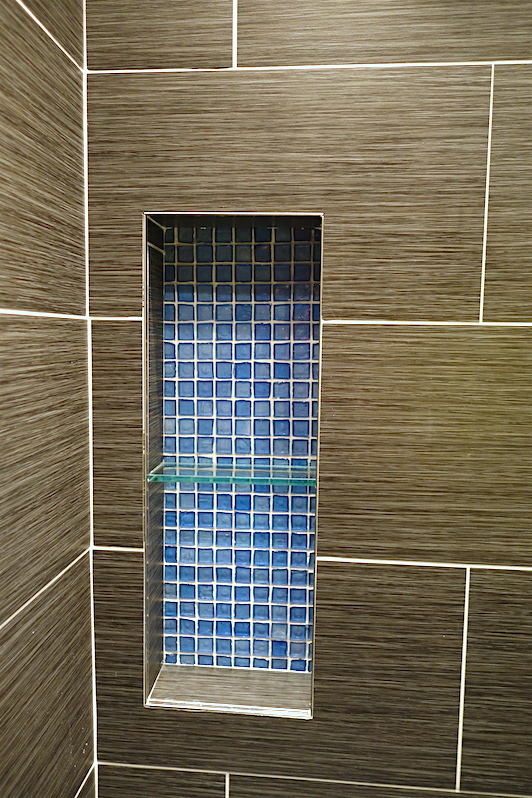 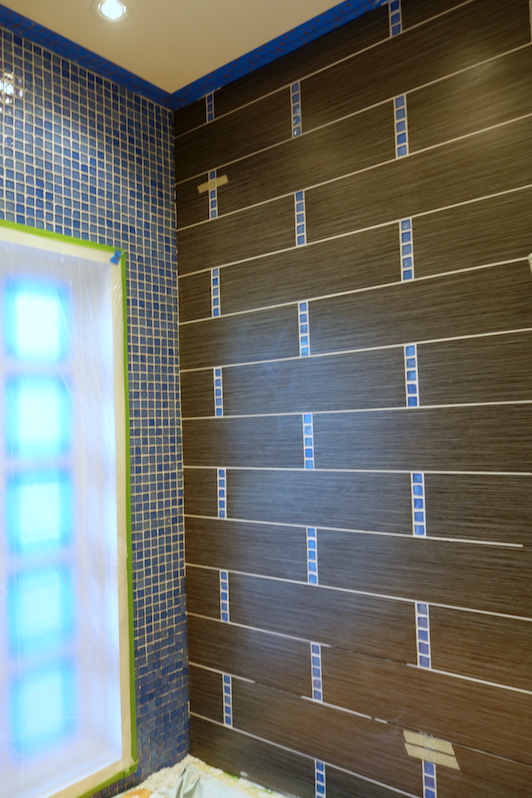 Now I know what you’re thinking. You’re all, “Well, that was a lot of progress for one room at Pleasant Valley Ranch, I’m sure they stopped there.” Sorry buster, but you’re wrong. We’re just getting started. Want more bathroom updates, well you got ’em, because we added plumbing hardware, and now this bathroom is too sexy for itself.