Okay, so all the while that our bathroom is playing worksite to three to four awesome tiling dudes a day, we decided to make life even more overwhelming by completely disassembling the kitchen in order to put down the new floor.

Because, chaos is fun!

When it came to the kitchen, we really didn’t like the idea of tiling the floor. Seems so… normal. We wanted something different. But what other material can you put in a kitchen that is amazing, yet easy to clean?

Enter, Jack, a friend of ours who owns Concrete Blonde, and specializes in making concrete floors a work of art. That’s super awesome! I mean, we want a work of art. Only problem, we don’t have a concrete floor. We’re on pier and beam. Well, we talked to Jack and decided to take a chance that we could make our plywood subfloor into a work of art using metallic epoxy finish.

Yep, that’s right, the floor is going \m/ METAL \m/ (to be read in a high falsetto voice)! I tried to find a good YouTube clip of falsetto for the edification of you non-metal heads, and after listening to way too many dudes squawking like geese in their basement bedrooms, I thought better of it. Instead, here’s some Slayer. You’re welcome.

Why? Because, it’s Slayer! \m/ Also, Tom Araya’s metal yell at the start, sounds a hell of a lot like me hollering with glee when these glorious floors were finished. Also, imagine the Slayer pit on a really slippery floor. Spastic and hilarious and probably exactly what I looked like as I slid across the floor in my socks like Tom freakin’ Cruise riskin’ his business. Excited to see what I’m talking about, well you should be, cuz it’s exciting.

Editorial note: if you’re not listing to Slayer as you read this post (as I am while writing and editing it), then you’re doing it wrong. \m/

So to bring you up to date, here’s the kitchen we’ve had for years and years. The Commie kitchen, yep. 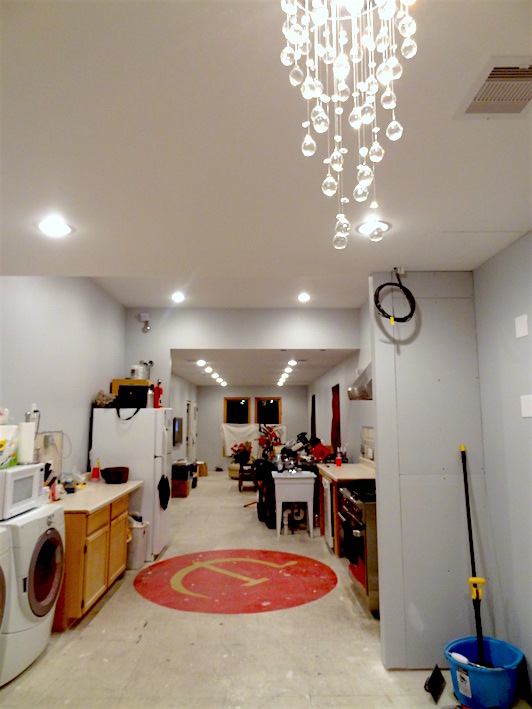 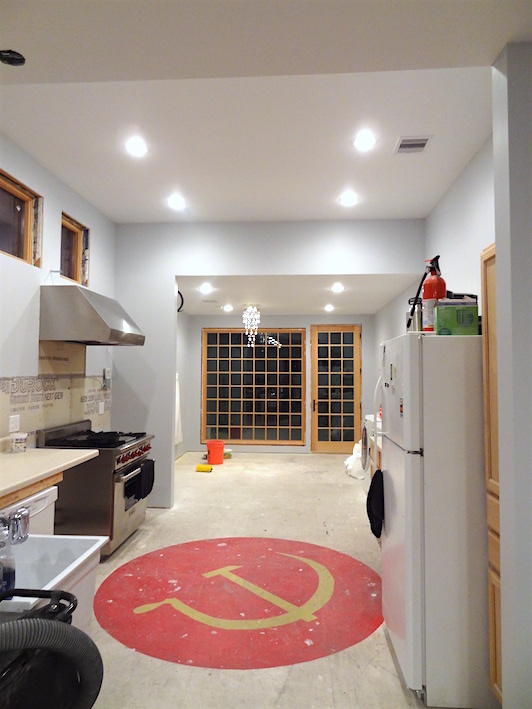 Of course, in order to work on the kitchen floor, we had to dissect the kitchen. Our beautiful new couch was shoved into the corner of the living room as was all of the kitchen stuff. 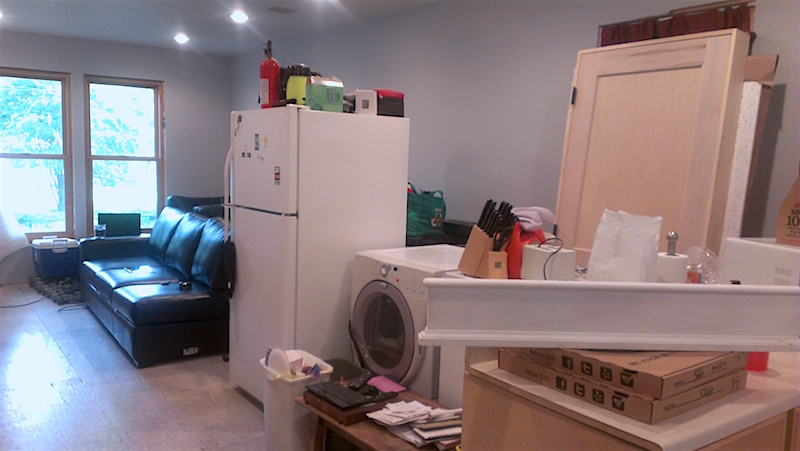 It made life a little… challenging. 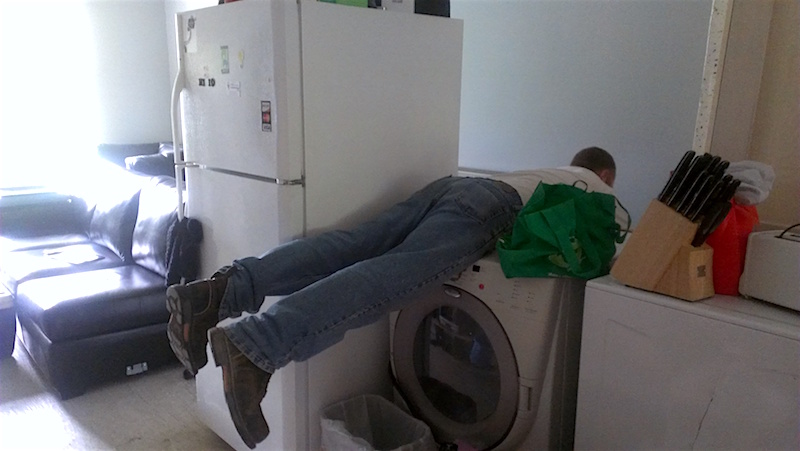 Anyway, Monday morning bright and early, Jack came over to clean the floor. 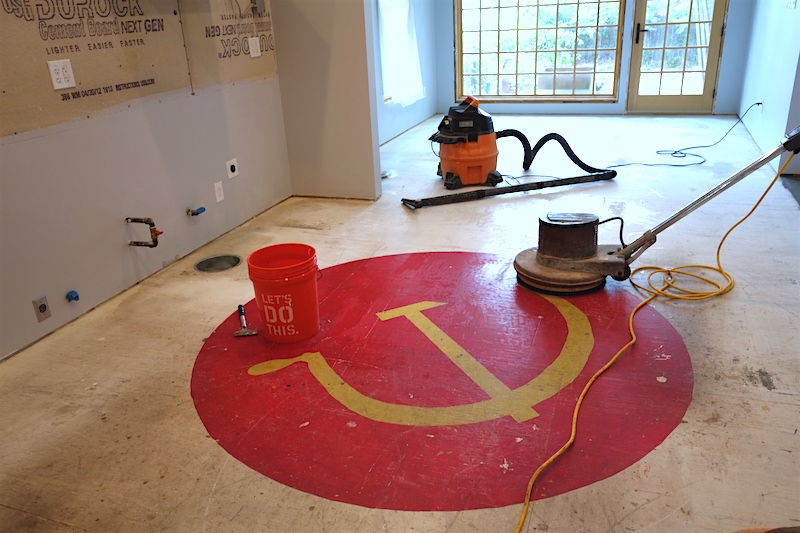 Then put down a coat of RedGard. 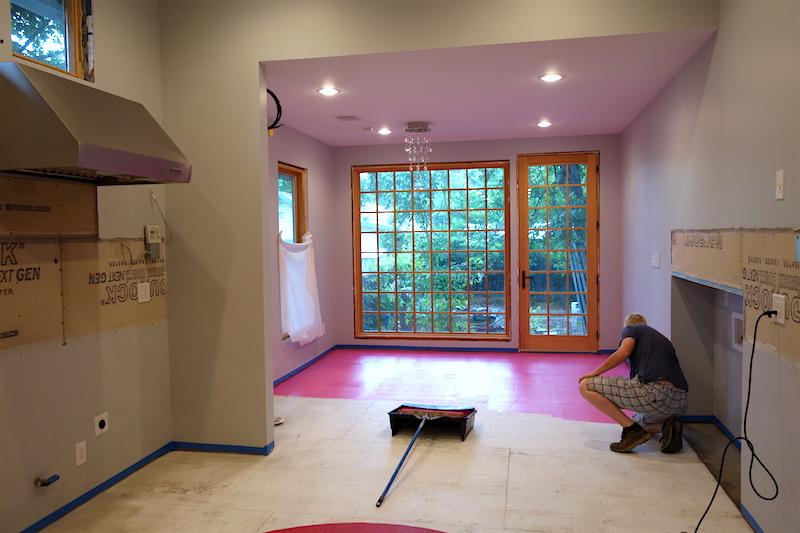 Then puttied all the seams between the plywood in order to level it all. Look at that facial expression, oh yeah not stressed or overworked at all. Much love, Jack, for fitting us into your impossible schedule. 🙂 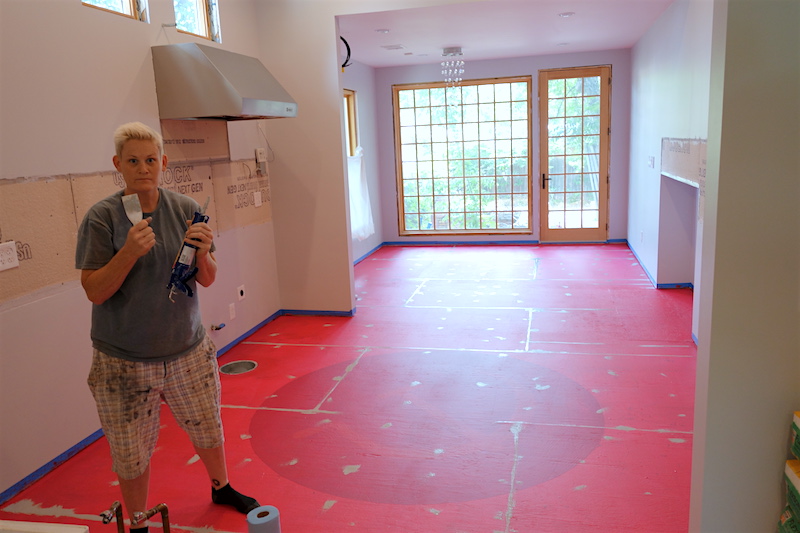 Next up was a cement base, which Jack primed with gray because we were going with a gunmetal color for the metallic epoxy. 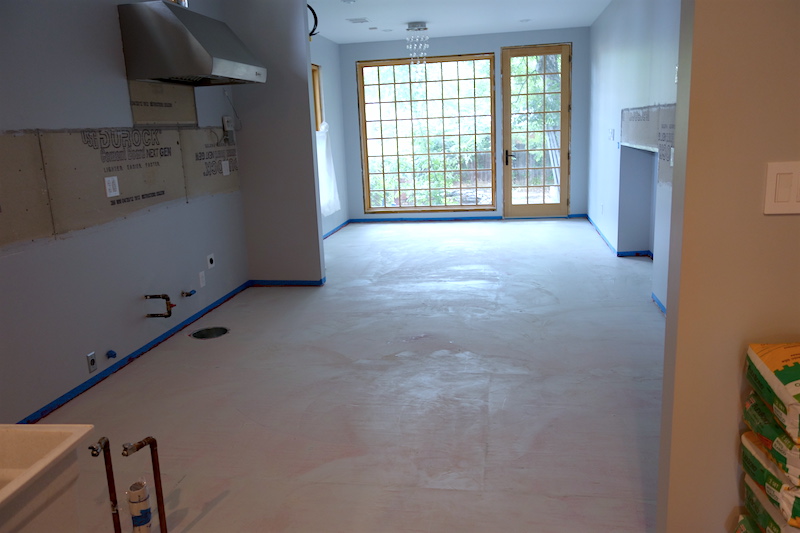 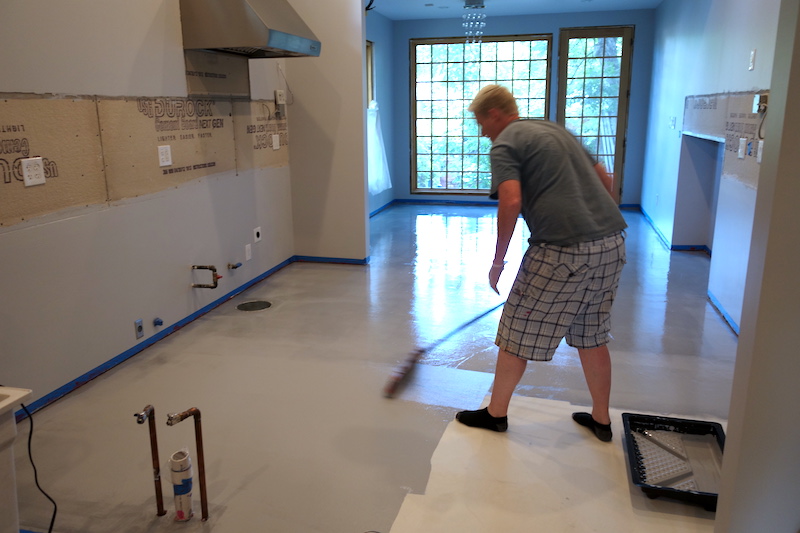 That evening, Errek created a handy, dandy clean room wall to keep any dust from the construction going on in the bathroom out of the epoxy going onto the floor the next morning. He was pretty proud of his zipper door, so behold. 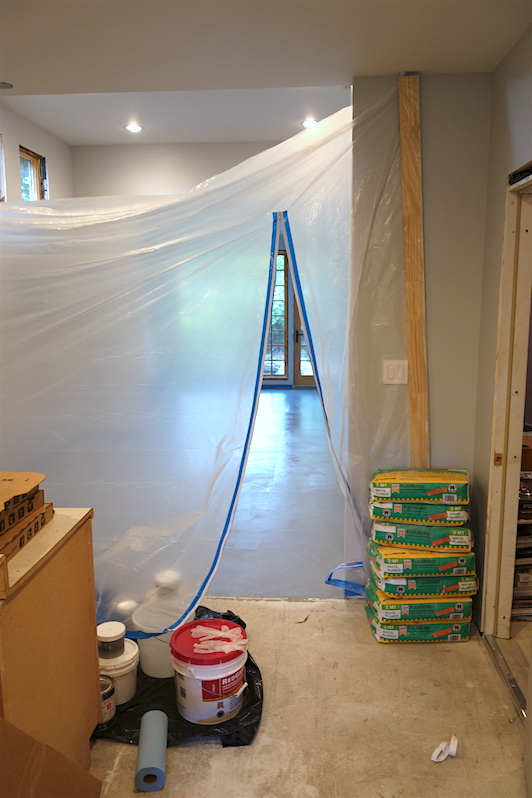 Next morning, super early Jack and Marco came over to lay the epoxy. 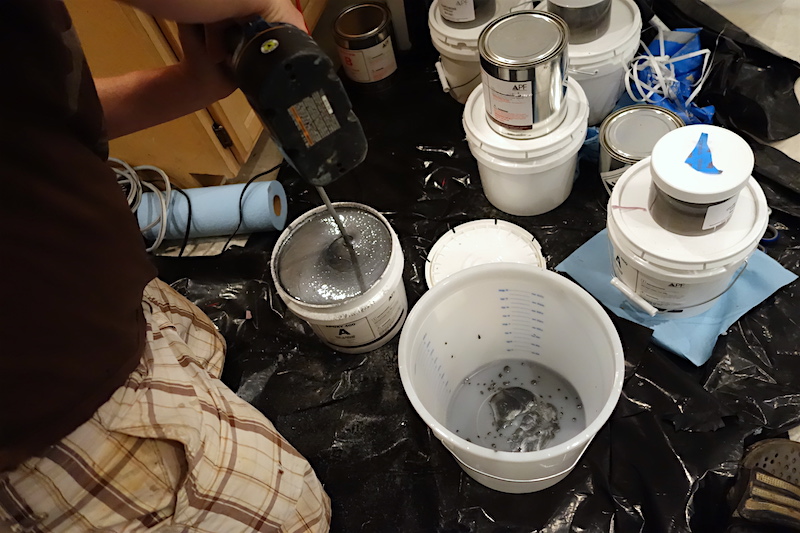 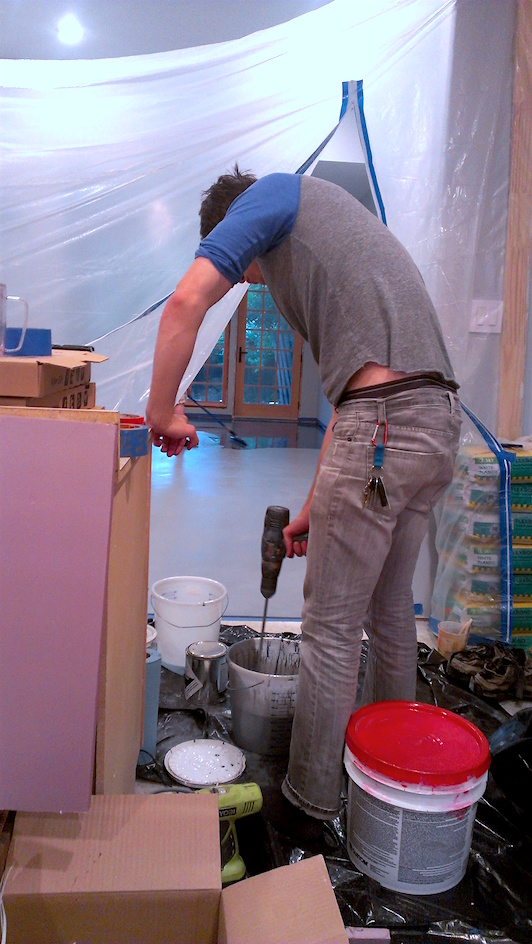 This stuff goes on as a liquid and you work it with a trowel and a squeegee to encourage randomness in the patterns as different shades of colors blend together and come through. Then as it dries, it moves and self levels. It’s like The Blob, but less murderous and really neat looking. 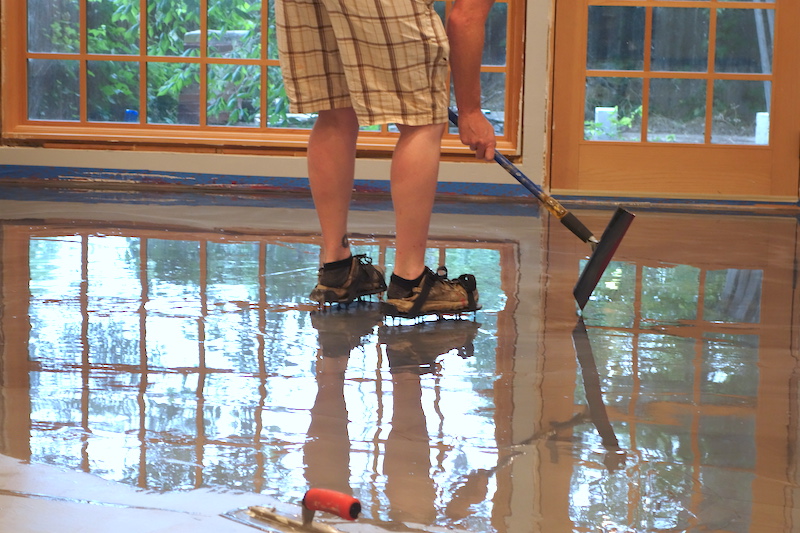 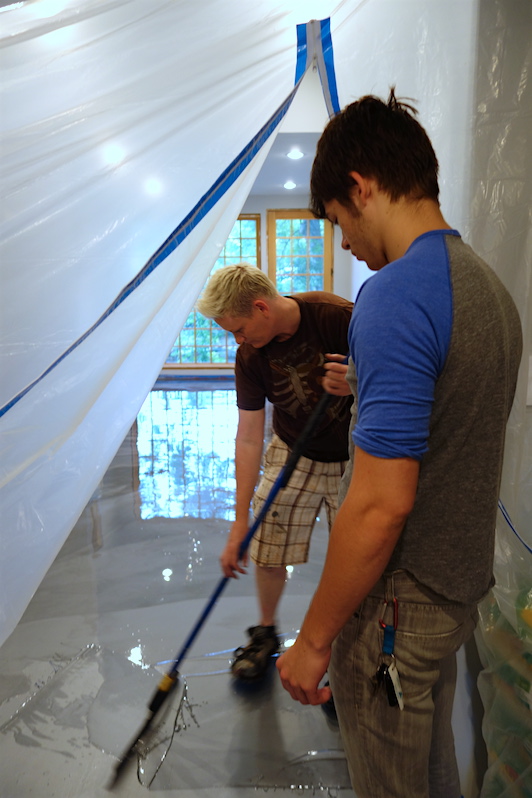 This layer bubbled a bit, probably because of the unusual underlayment (due to our pier and beam situation), so the next morning Jack and Christine came over and did another layer. 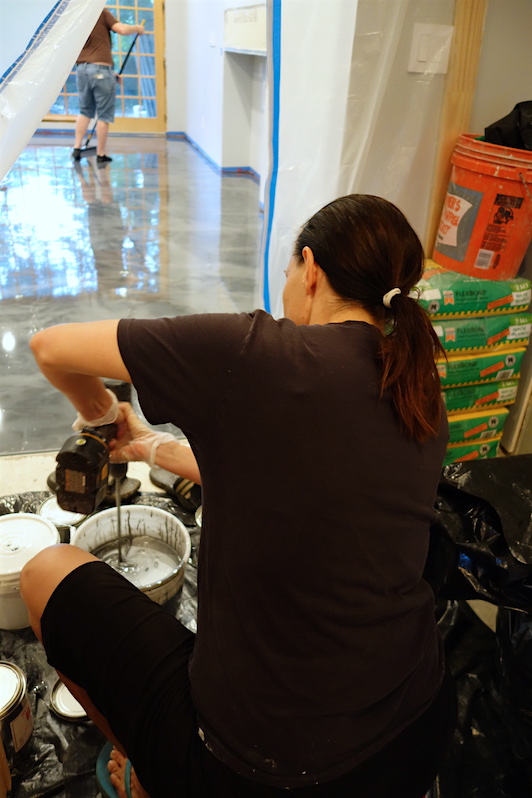 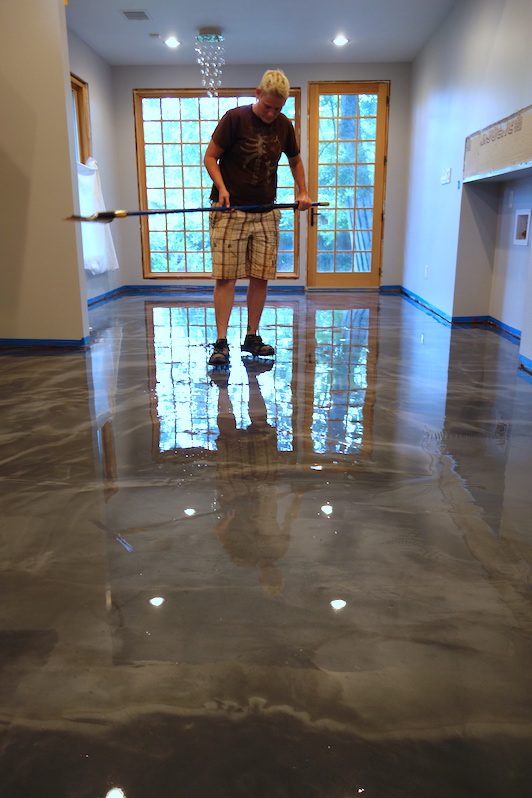 And the result is… well, it’s pretty much the most awesome floor I’ve ever seen. 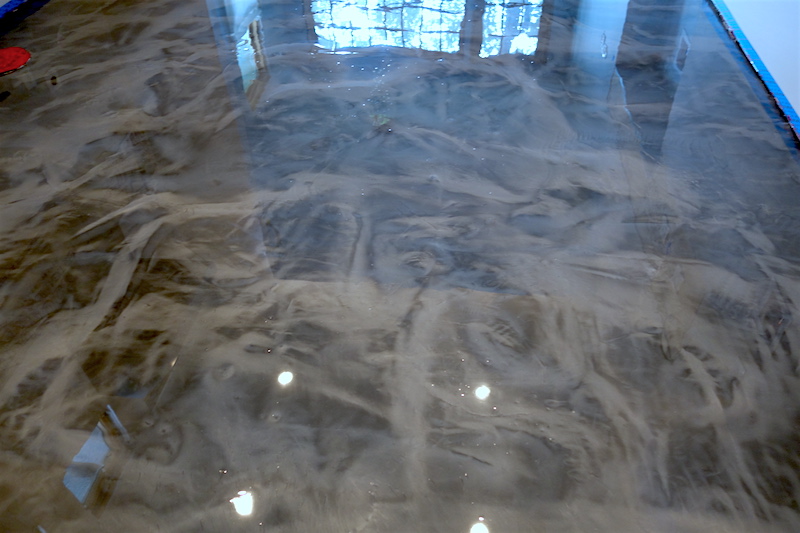 Oh my gosh, look at this crazy gorgeous floor. It looks like mercury. The epoxy is really durable and stands up to drops very well. It’s easy to scratch though, so we put a couple of coats of a skim coat finish on it. 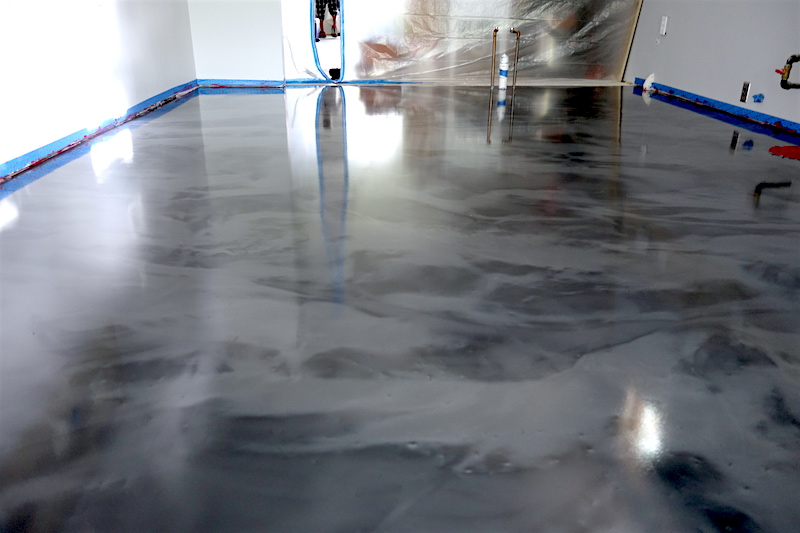 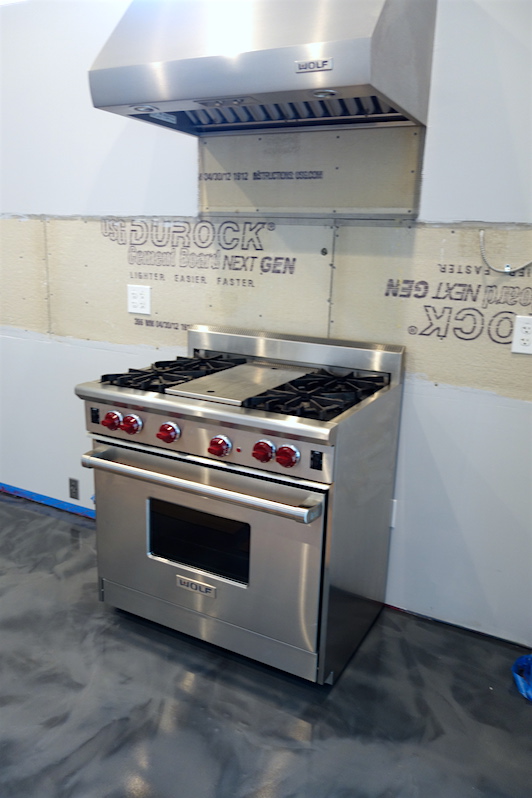 And yeah, the stove is the only part of our original kitchen that we wanted to put back on that floor, so guess what… It’s time to call Brian about some kitchen cabinets. Hells to the yeah!