Chapter 84: Back in the Saddle Again

Oh hi, gentle reader! It’s been a while, and that’s entirely my fault. Whoops.

Isn’t it funny that in my last blog post I suggested it would probably be 24 months before my next update, and it actually took me 26 months? So, yeah, it’s been a while. But I’m excited because this update isn’t just a content update, it’s a whole site redo. A friend helped me put the site into WordPress so that it’s easier to read on your phones and you can even leave comments (you know, if you’re into those sorts of things). Plus I made all the photos larger so you can actually see what the hell is going on in them. So it’s worth going back to the start for a refresher on what’s happened to this point. And if you haven’t read the story to this point, well you should definitely go back to the beginning here. It’s been a hell of an odyssey so far, and we haven’t actually gone anywhere.

Well, no wait, that’s not true. We’ve gone lots of places, but that was in our other life, our non-PVR life. We’ve had a lot of adventures outside of the house lately, actually. It’s been a busy 26 months while we did cool things like…

Got married! Imagine that, even after ten years of working this construction job together, somehow we still magically like and love each other enough to get hitched. 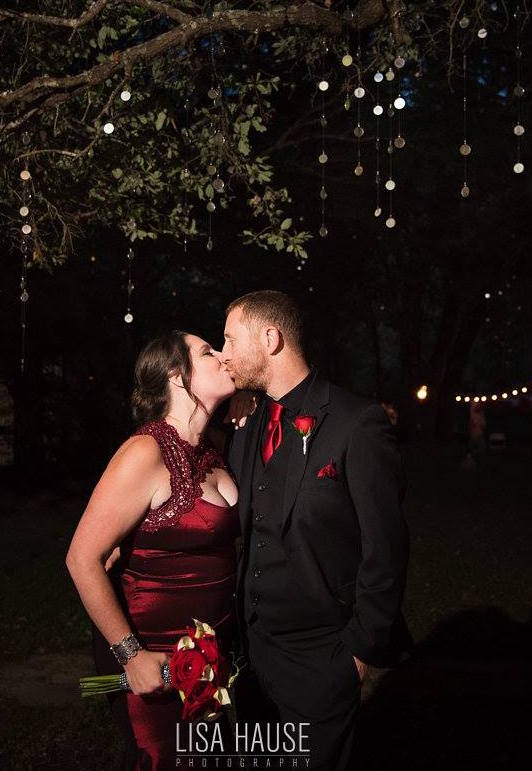 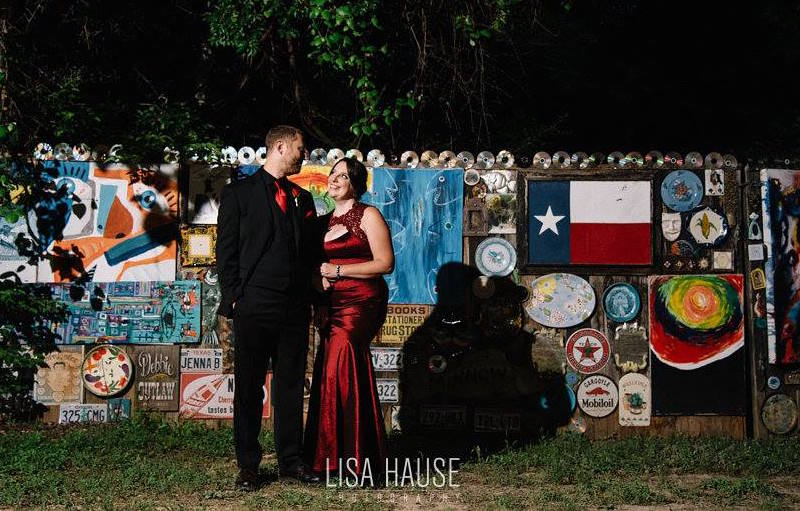 The wedding was a weekend long affair out at Casa Rio de Colores celebrating love and we were so lucky to have so many amazing friends and family to celebrate with, some of whom flew or drove in from other parts of the country and globe to be with us on the big day. We love y’all! You are the wing beneath our wings. 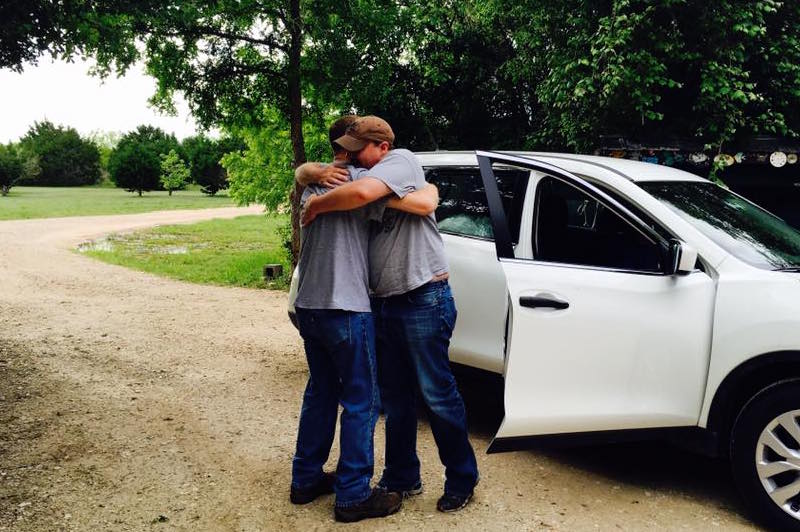 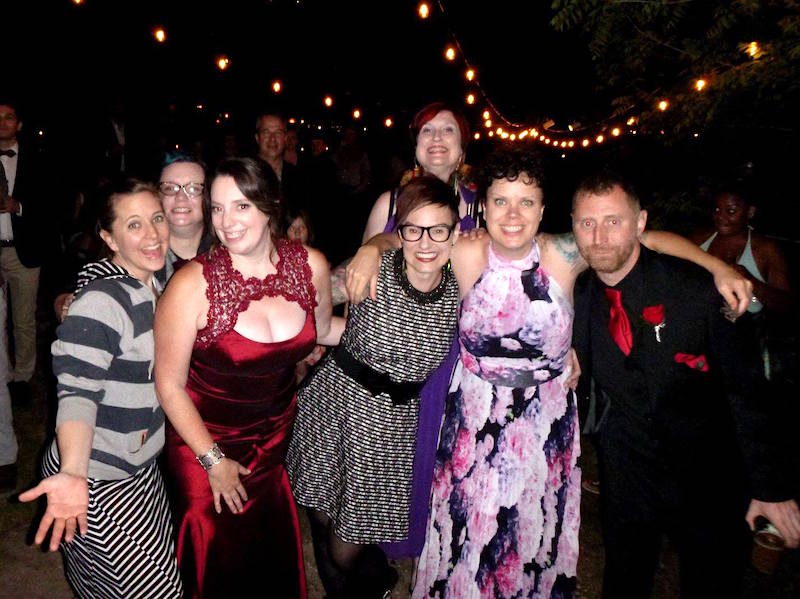 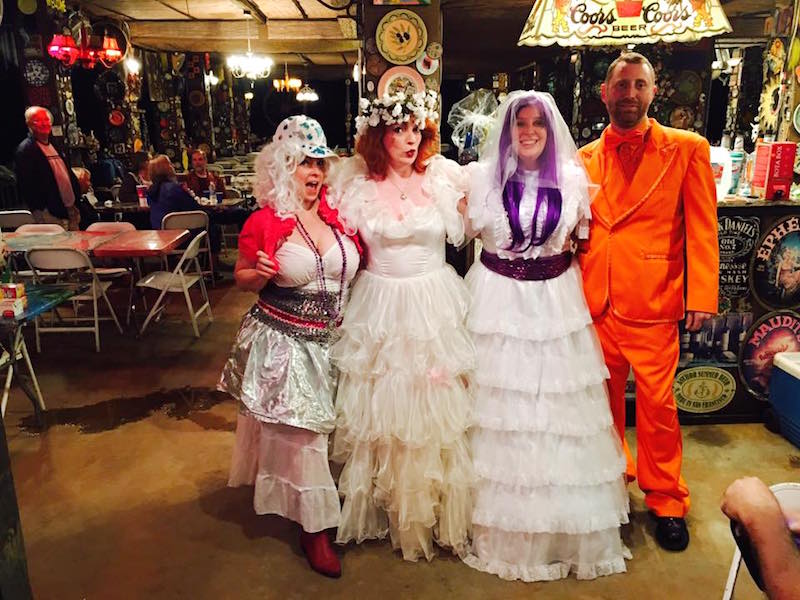 Also, check out the amazing Jackalope wedding cake by Natalie Sideserf of Sideserf Cake Studio. Totally badass, and tasty, as were all the cakes. Mmmm cake. 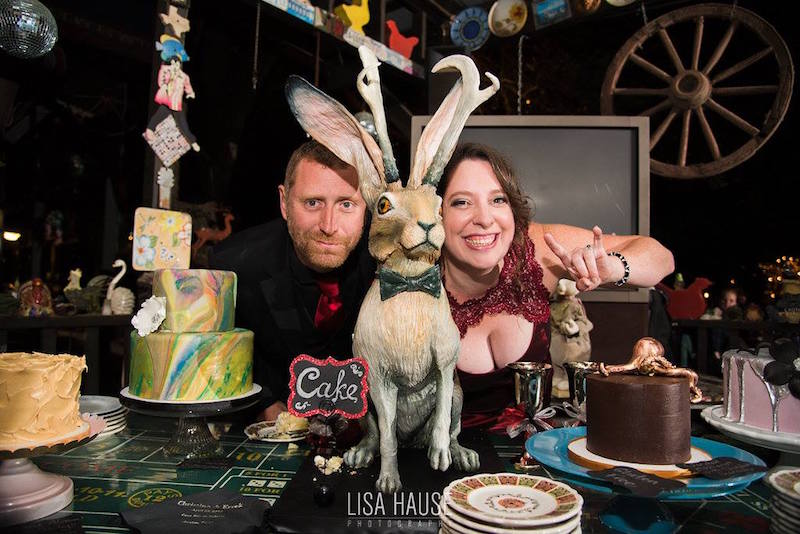 A few months after the wedding, we went on our honeymoon to Iceland where we took awkward selfies in front of beautiful and neat things! 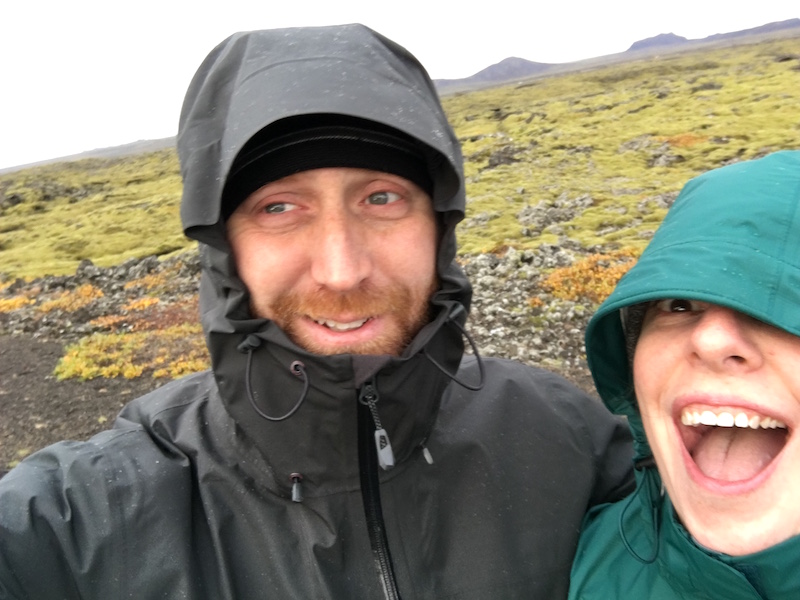 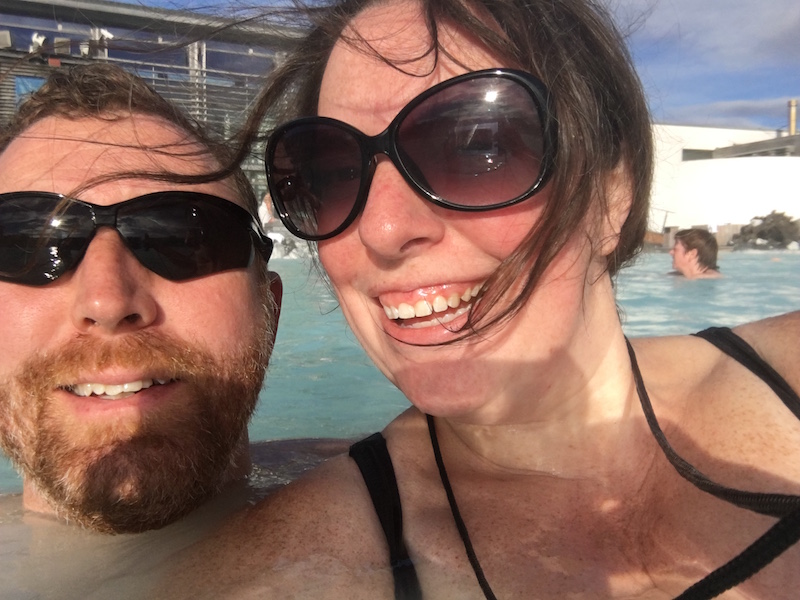 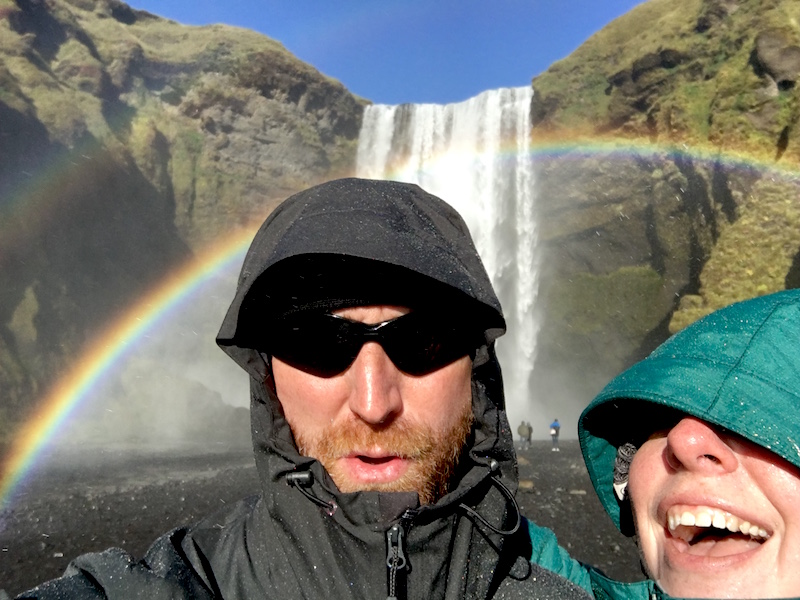 Obviously the hood on my rain jacket was a wee bit too big. Oh, there’s my face…on the top of a freakin’ glacier atop an active volcano! Yep! 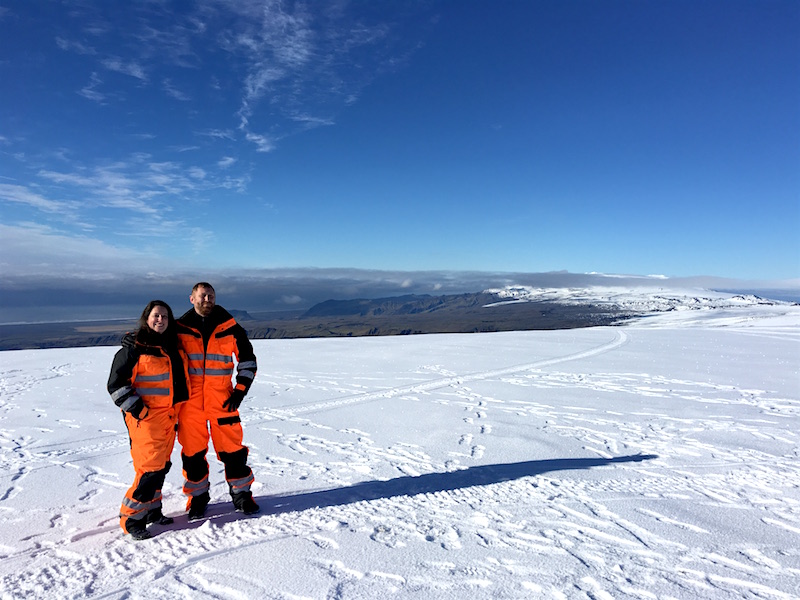 Plus there were northern lights…and a lot of sheep! 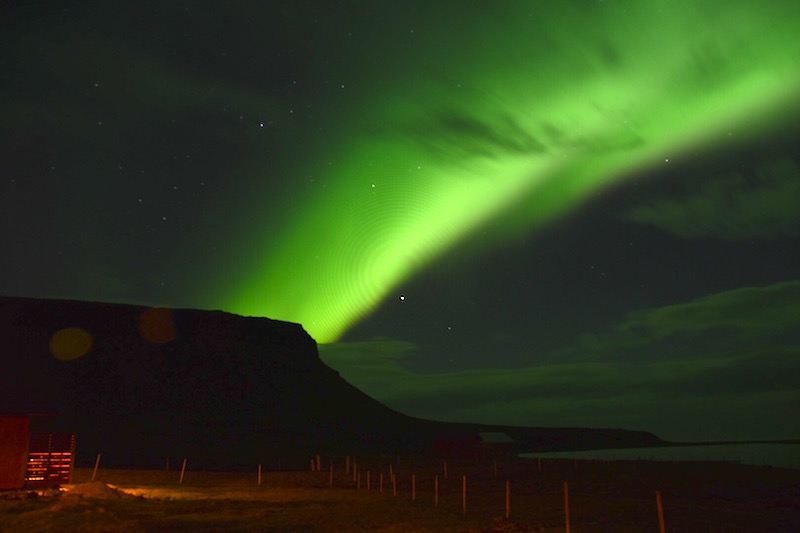 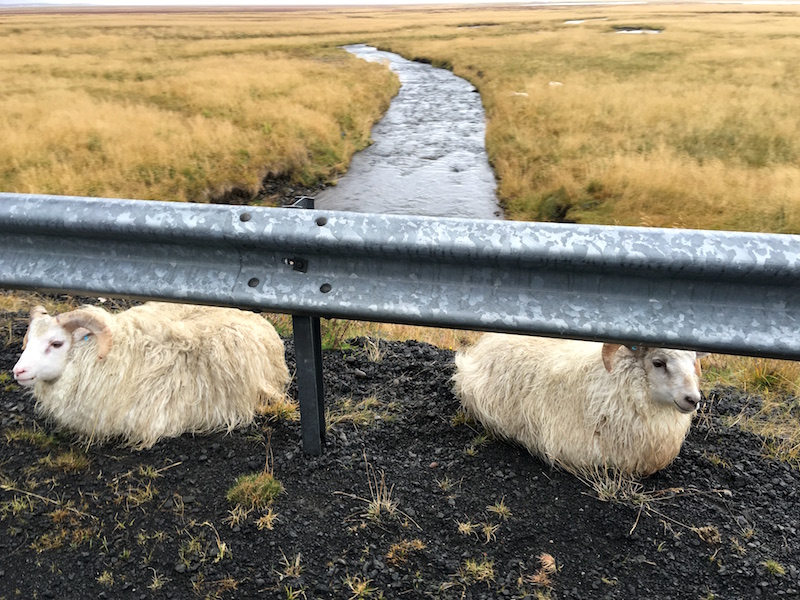 Yeah, so it’s been a good time, but in between all of the awesomeness happening, we still managed to get some progress made on the house.

However, before we dive into the sea of progress, the Wide Progresso Sea, if you will, I’d like to talk a bit about the living history of this place first.

Remember when we were demolishing our house bit by bit and saving all of the wood in the abandoned house next door which our neighbor agreed to let us use if we maintained the yard?

Well, in 2016 we got a message from our neighbor that the city was forcing her to demolish the house. Our theory as to why has to do with gentrification. Our block has changed quite a lot in the eleven years we’ve been here, and there are a couple of new swanky places being rented on AirBnB. We figure one of those folks called the city to complain about the eyesore.

Anyway, whatever the reason, the city started cracking down and gave her a deadline — demolish it or start to incur fees. So we had to find a new home for all of that incredible old wood, and fast.

We decided to rent a second Mobile Mini unit. That’s right, now we have TWO temporary storage containers in our driveway. In this one, we stored all of the best old wood, which was mostly the old flooring. Then we called our friend Brian. You know him, he’s the badass carpenter who built our bathroom cabinets and kitchen cabinets.

We explained the situation to Brian, and explained that he could take any of that wood he wanted. He often works with old reclaimed wood, so he jumped at the chance. But we had one caveat, we asked Brian to make us some living room furniture using some of that old wood.

The idea was to have something really beautiful and new built from the original innards of this house, an homage to the history of the old house in the form of two tables and an entertainment console.

Brian was excited about the project and came by to talk to us about what sizes and dimensions we had in mind and generally what the uses would be, then we pretty much gave him creative license to build something amazing. Because, you see, Brian’s an artist at heart, and a carpenter by trade. His woodwork is a work of art, so we wanted to let him let his artistic flag fly on this project.

So in a completely uncharacteristic move, we didn’t micromanage at all. We gave Brian the basic info and then went radio silent until a few weeks later, when he called to say that the furniture was ready. I’ll admit, I was nervous. What if we hated it? With nervous/excited butterflies in our bellies, we told him to come right over.

So come right over he did, and brought with him three gorgeous pieces of art.

Here’s the coffee table made with our old pine, plus walnut. 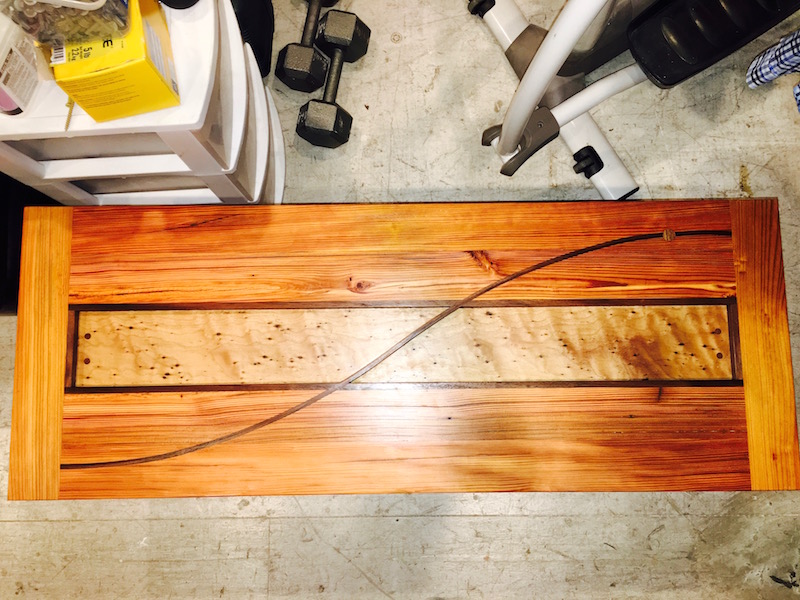 Oh my god, I love that curved line detail in the middle. *sigh* 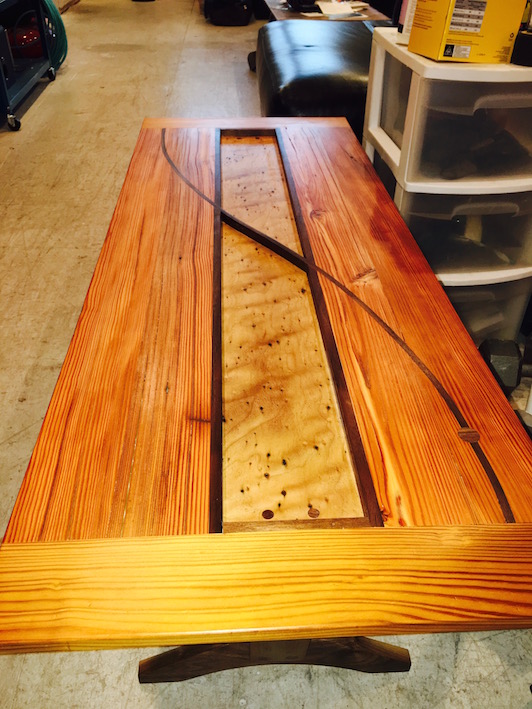 This is the side console table, which was made to fit between the chaise lounge and the couch, hence the two heights and depths, so it’s handy from either the high side by the couch or the low side by the chaise. 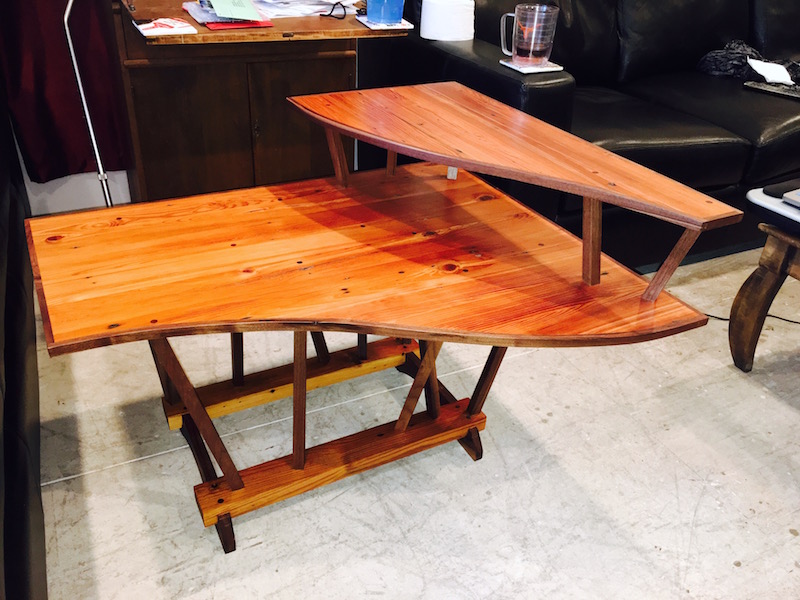 Lastly, the pièce de résistance, an entertainment console which was designed to sit under the television and hide ugly things like Roku and Blu-ray players. 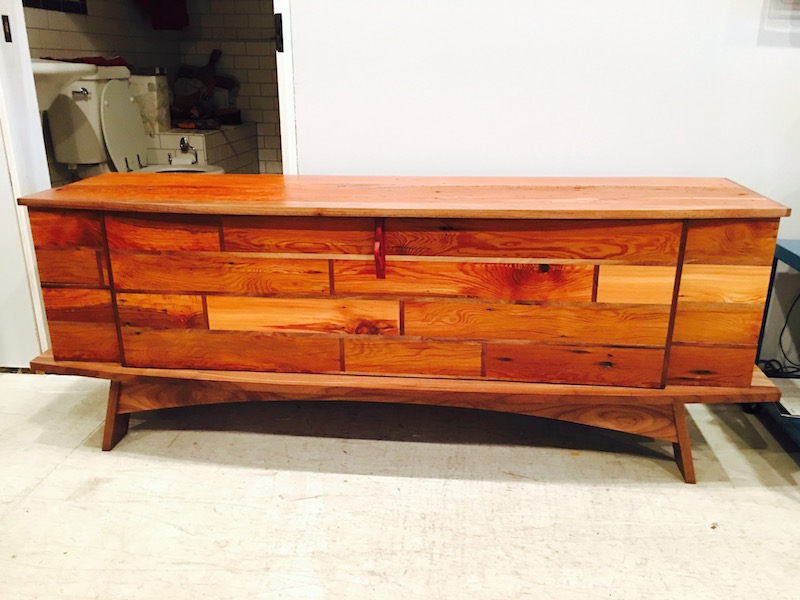 Inside, there is a portion of the back that’s open for cord management. Also, we got one of those infrared readers so that we can use the remotes without having to open the door for line-of-sight. 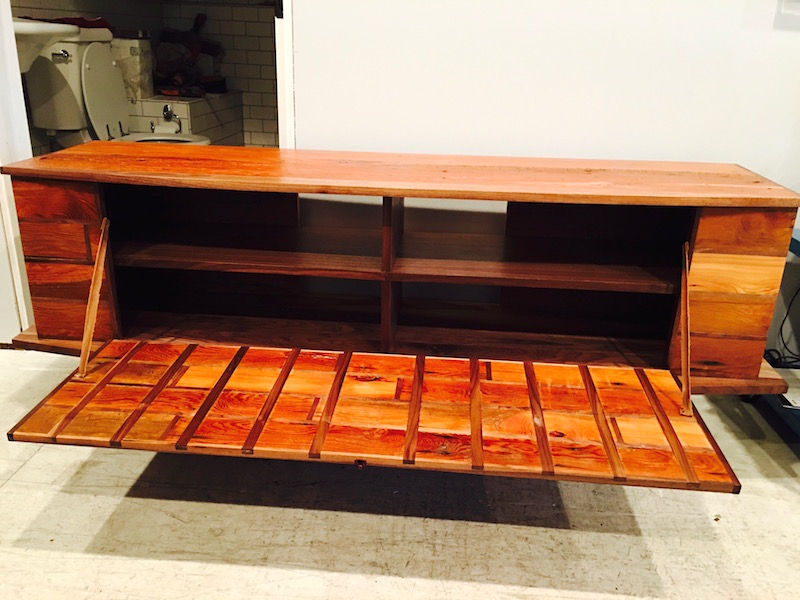 Isn’t it all just so lovely? And see those worn spots and holes, those are old nail holes. We pulled the nails out of those holes. 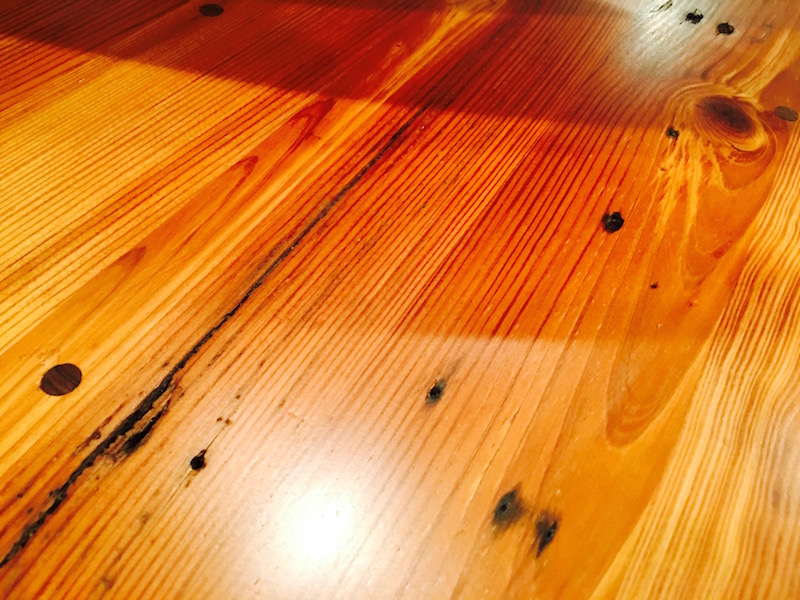 It’s exciting to me, as a student of history, to have these pieces of furniture which represent the original 1946 history of our house in such a beautiful, modern, handy, and intimate way. 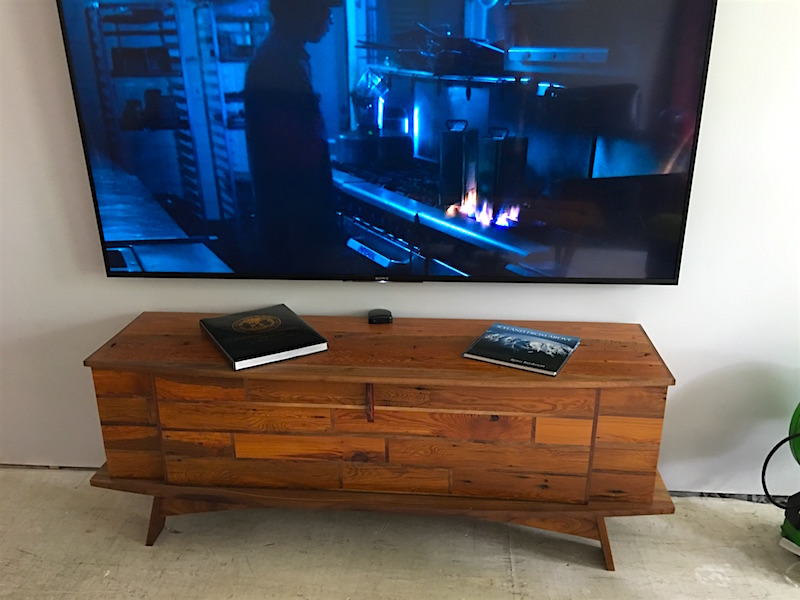 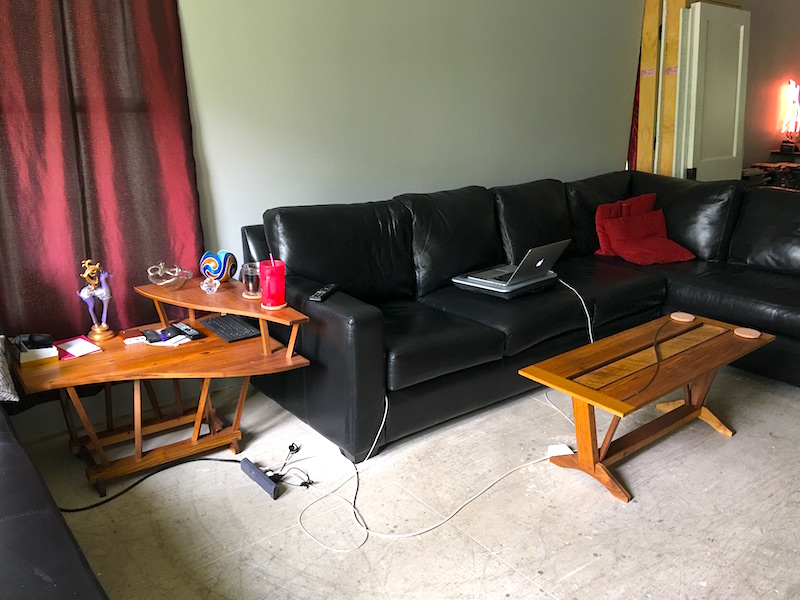 Right now, the furniture is too sexy for this room, but someday soon, when we put the original floors back in it, it’s going to be one damn fine looking living room.

In the meantime, though, back to storytelling. Oh, and let’s not forget the ending of this story. A few week later, at the insistence of city code compliance officials, another little piece of the street’s history was demolished. Bye bye, weird house next door. I’ll never forget those weird old meth heads squatting in you, or that time we were exploring around and found an old Hobble sticker on the wall and a neat old SXSW poster, which I kept by the way. What? Y’all, I’m the Govalle Neighborhood Historian. I’d be remiss if I haven’t kept it.

Anyway, here’s the demolition, which took weeks (due to rain delays) and looked incredible dangerous. 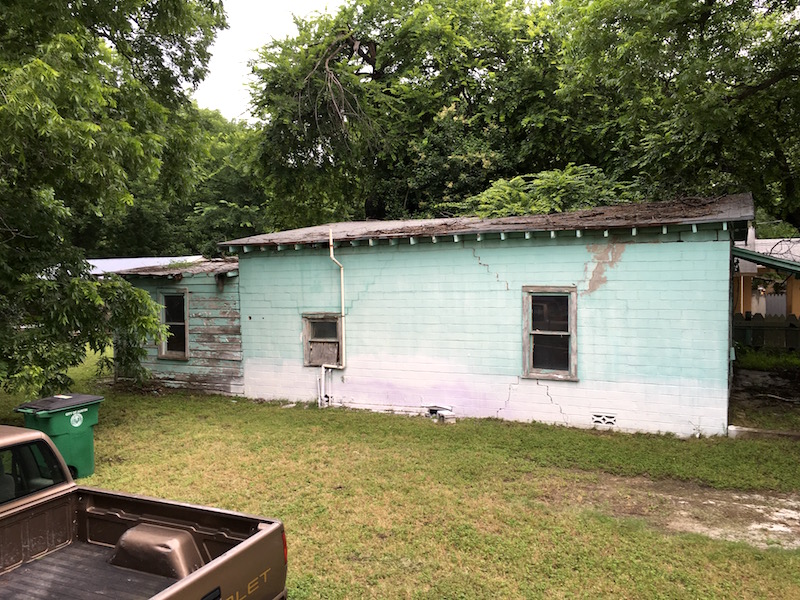 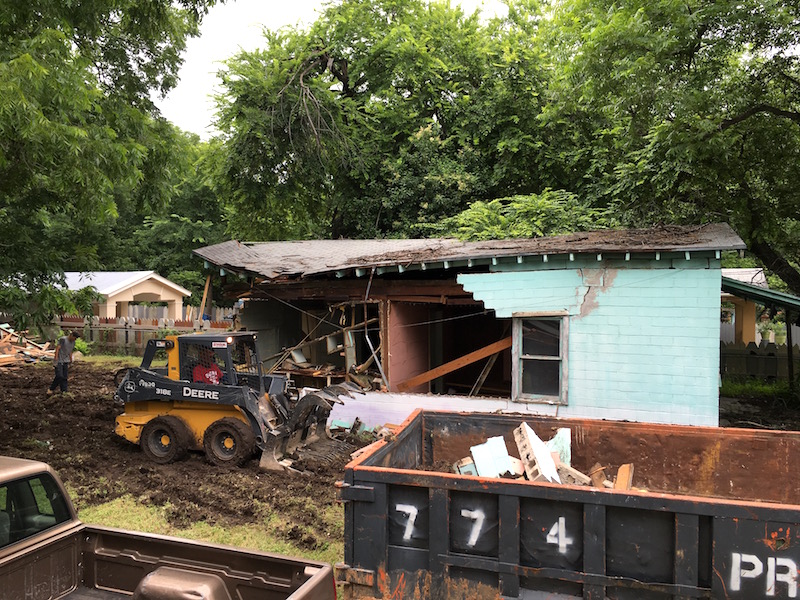 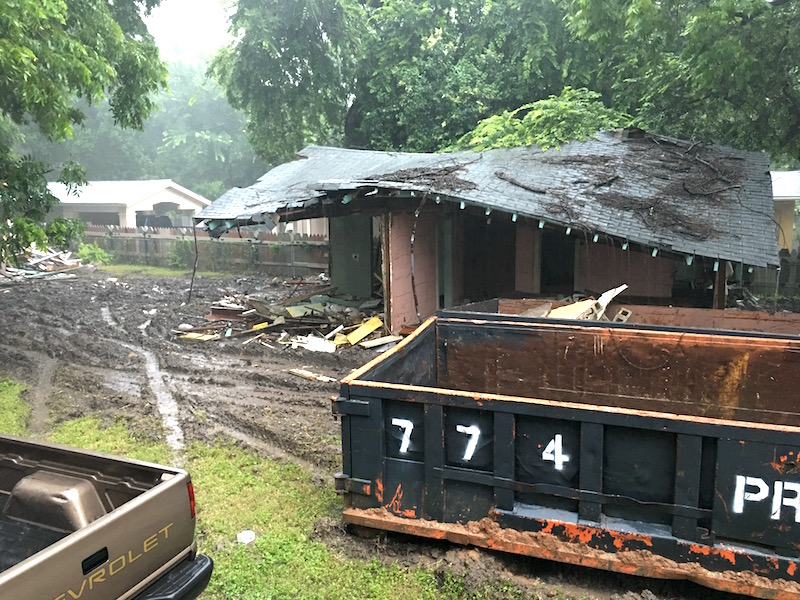 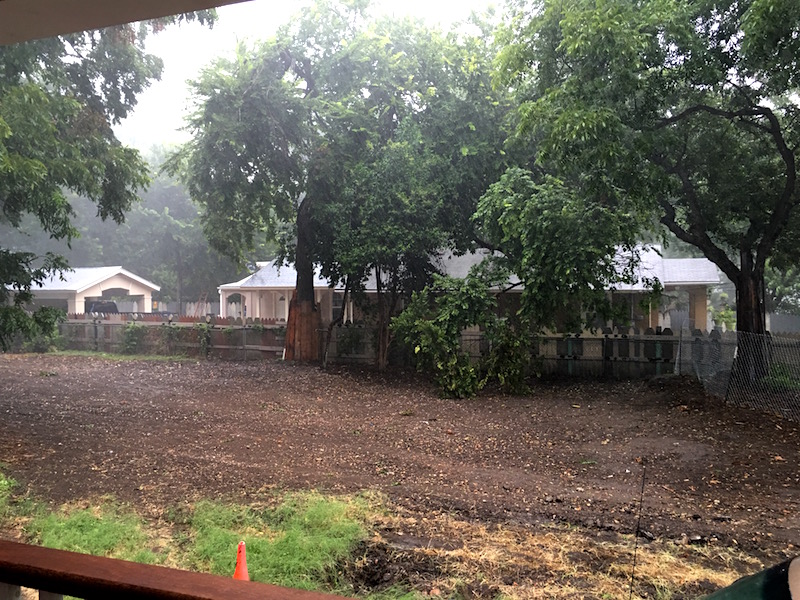 Funny story, the day after demolition was completed on the house next door, some lady from the state historical commission showed up, wondering where the house was. Uh…whoops. Day late and a dollar short, lady. Maybe you government bureaucracy folks should, you know, talk to each other.

And while we’re here talking about history, how about some photos Errek and I took on one of our first explorations of that strange, empty old house way back when. 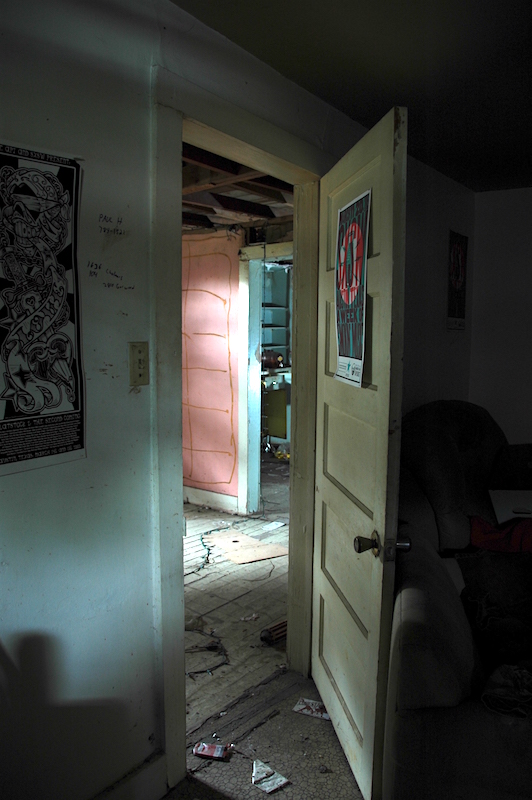 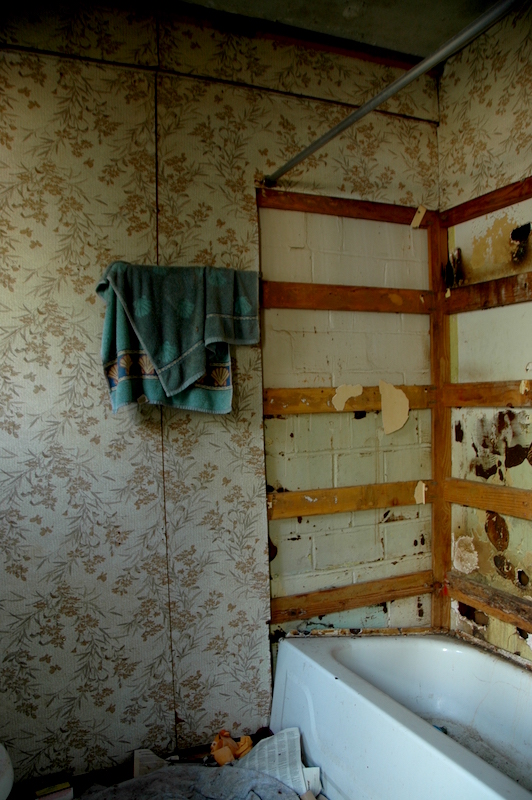 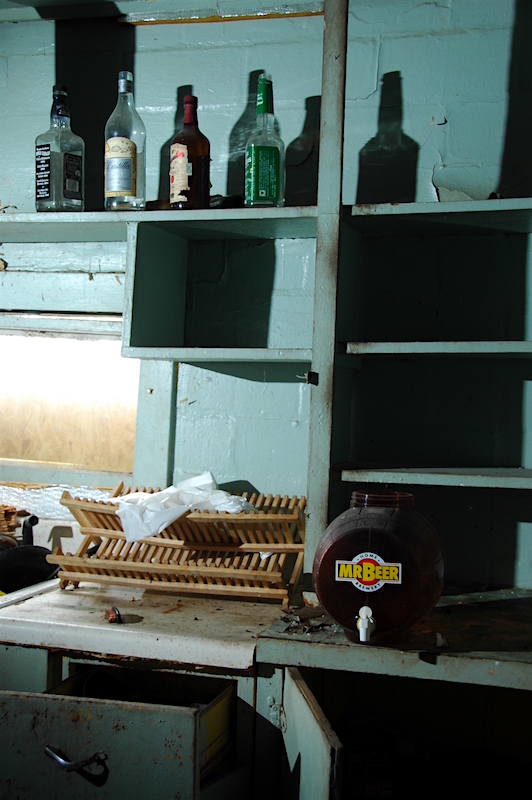