Aside from the bathroom, all of our focus for the past while has been on the outside of the house, which meant working in and around bad weather, which is always super fun. But it also meant not having to live in and around a big project, so that was cool and helped me stay moderately sane during all the wedding and honeymoon planning.

Our front porch has always been a bit of a beast. Once upon a time, it was concrete, but it was cracked and crooked. 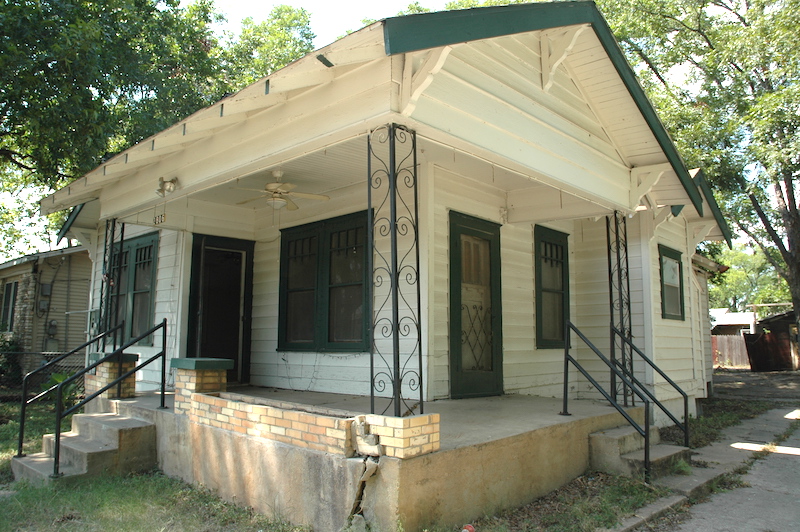 So we jackhammered the everloving crap out of it. 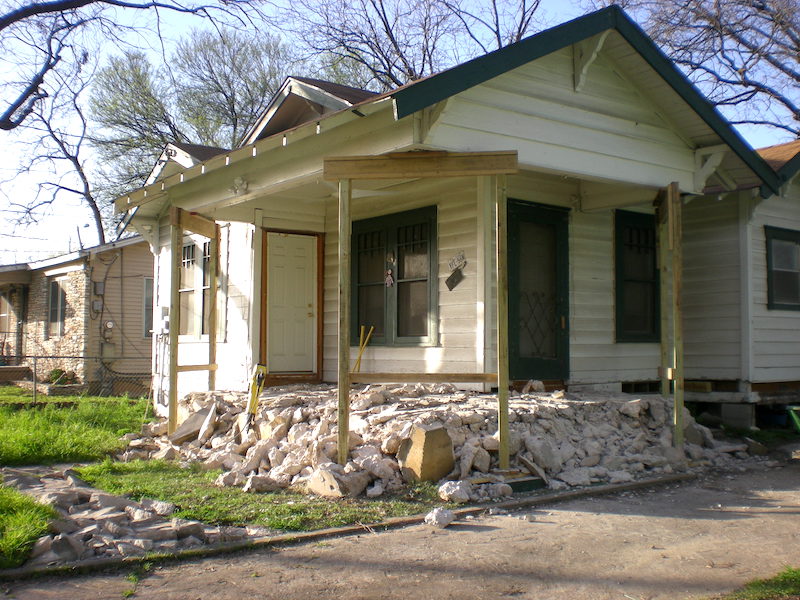 Then, we put in the steel frame. 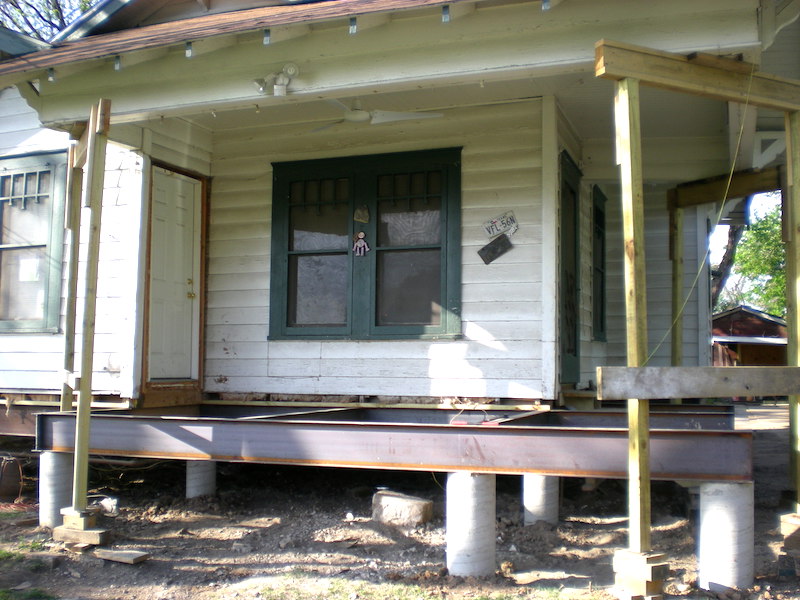 And eventually we added a lovely Ipe wood porch floor. 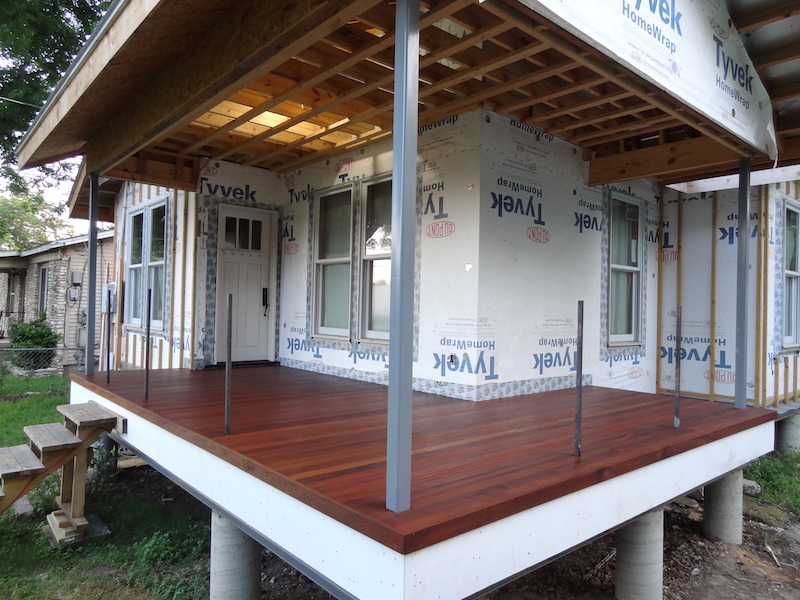 But still the railing was temporary and crappy looking. 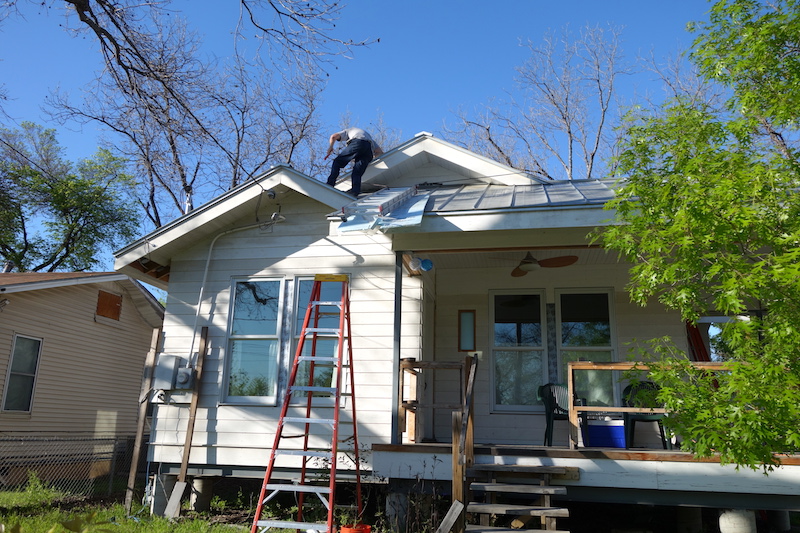 It was time to put in the permanent porch railing. To finish this out, Errek welded a top rail of steel to the posts, then clad the posts in wood. 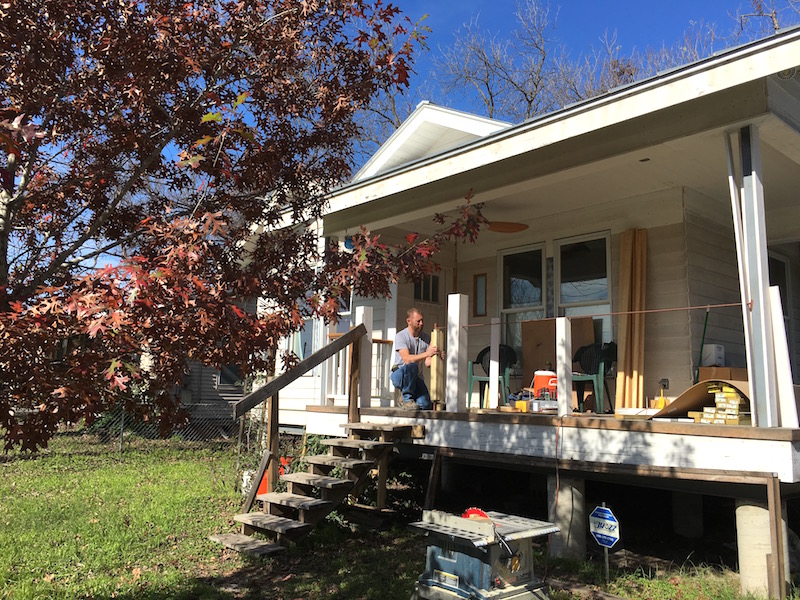 Then he added the slats that make up the railing so that little babies don’t go tumbling down to the ground. Also, the slats had to be four inches or less apart, so that babies can’t stick their heads in between them. Code compliance is all about the babies, apparently. 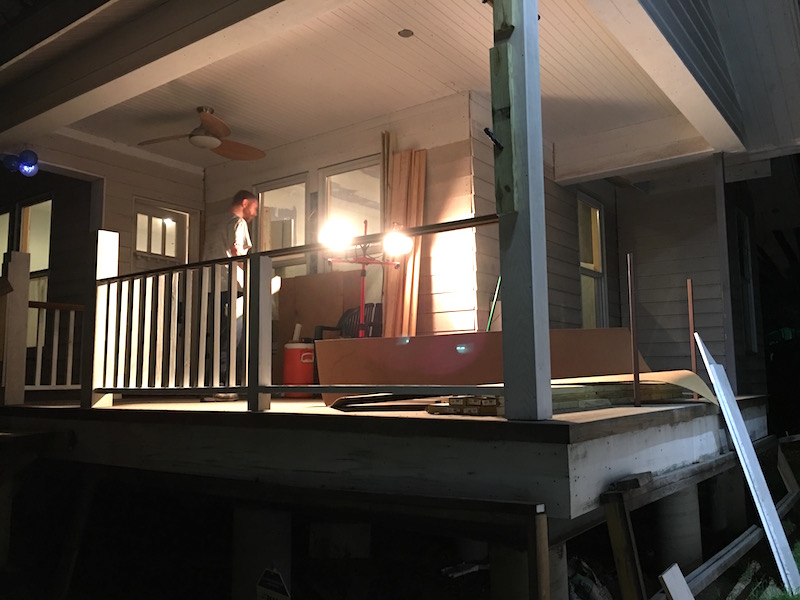 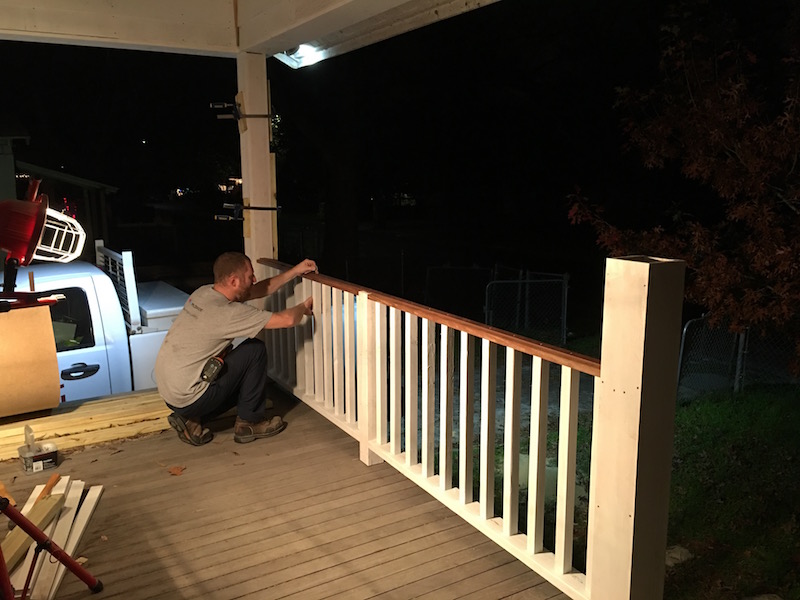 Working around to the east side of the porch. 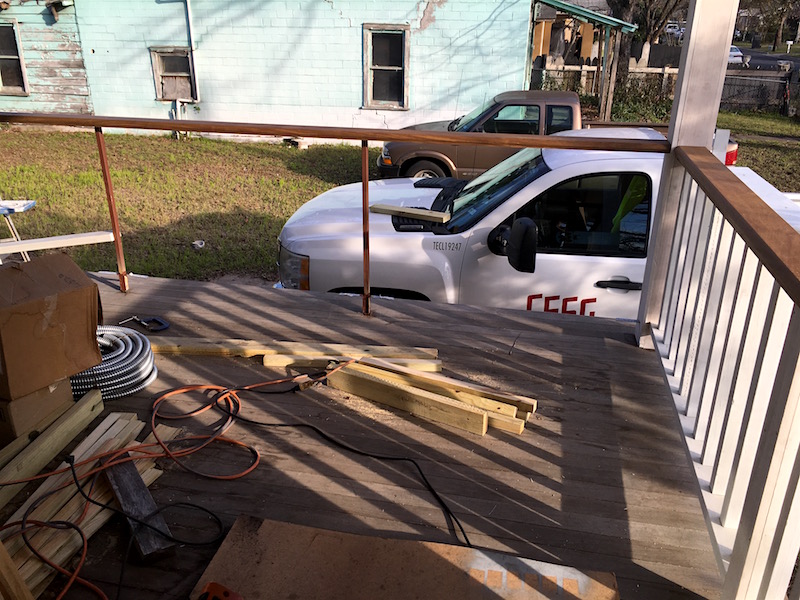 Ain’t she a beauty? 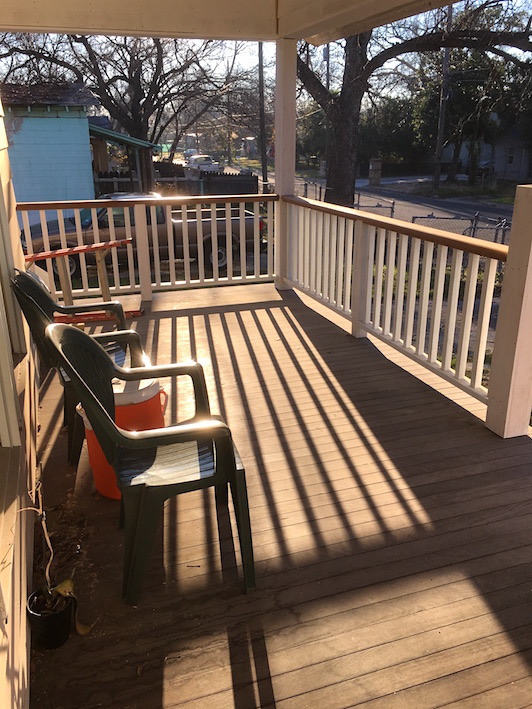 The house was really starting to again resemble the 1946 bungalow she was born to be. But wait, there’s more! Oh, you ain’t seen nothin’ yet, y’all.

With the porch gussied up, it was time to make the whole house pretty again, which meant tending to all of that siding once and for all. That’s right, it was time for paint. But first, there were a shit-ton of other steps we had to take in order to prep for paint.

First, there was the sanding. For this, we hired Bane. 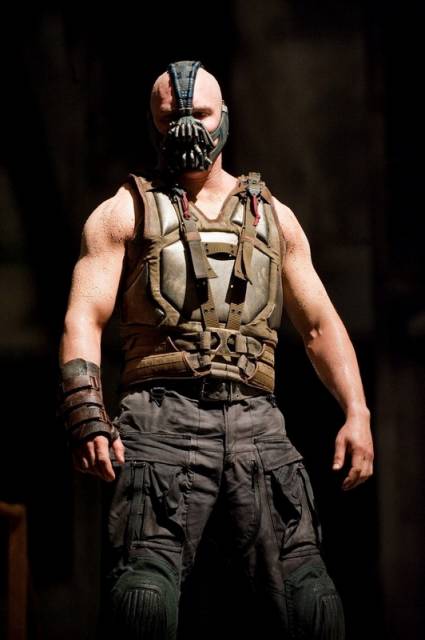 Kidding, we couldn’t afford Bane, so instead it was just me in a respirator. 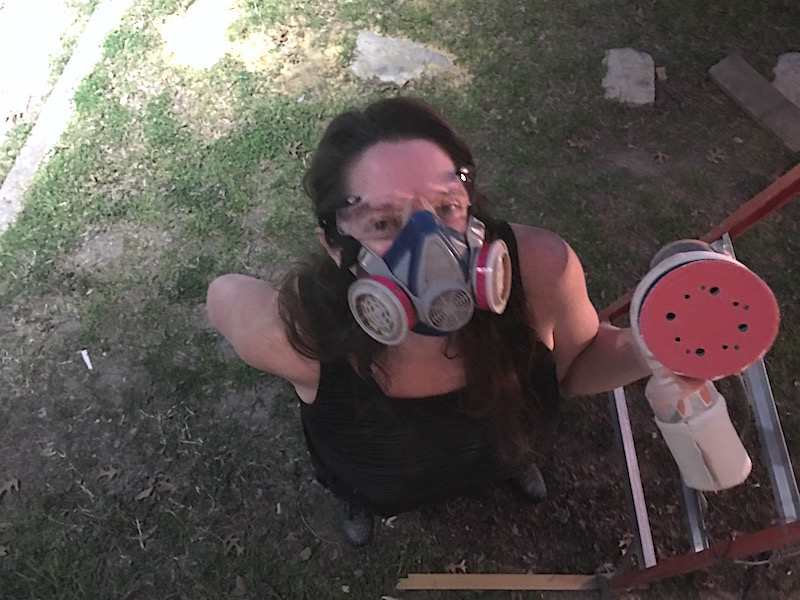 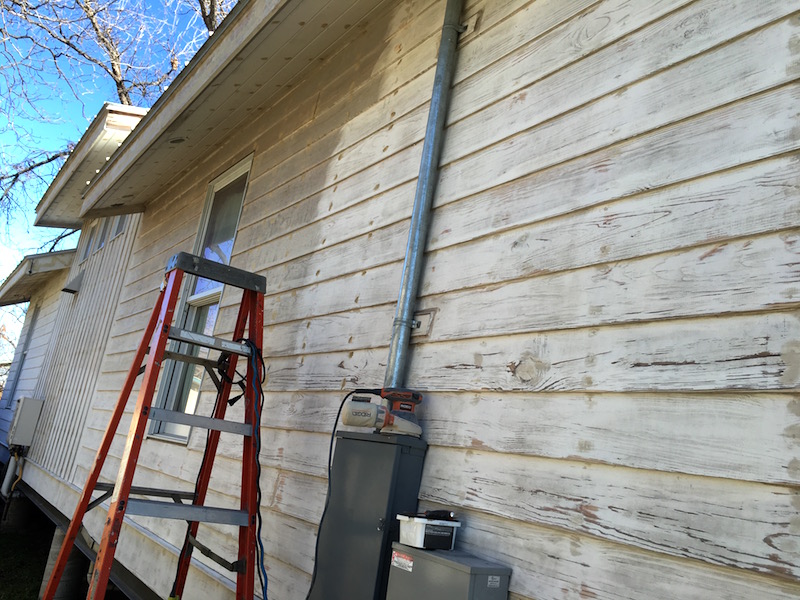 With all of the dust and flaky old paint sanded off, we then had to putty all of the nail holes. 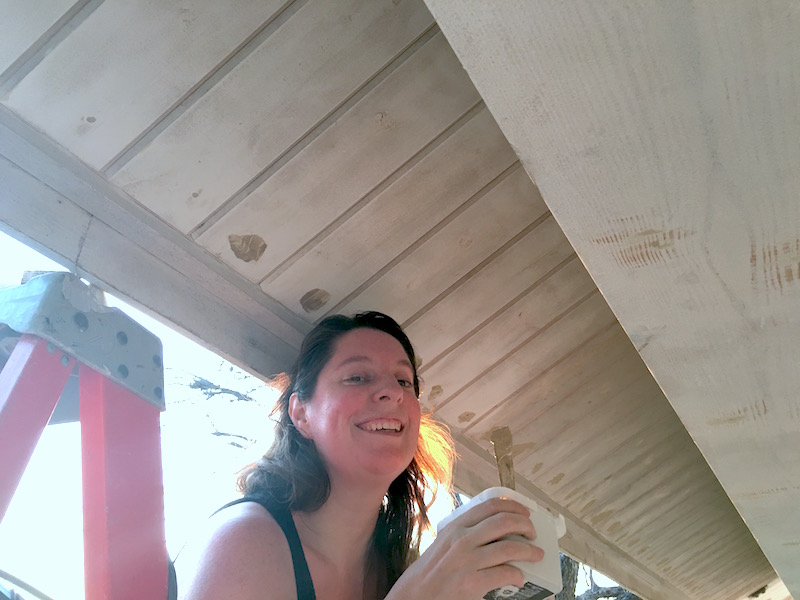 Looked like the house got a bad case of poison ivy. Calamine lotion everywhere! 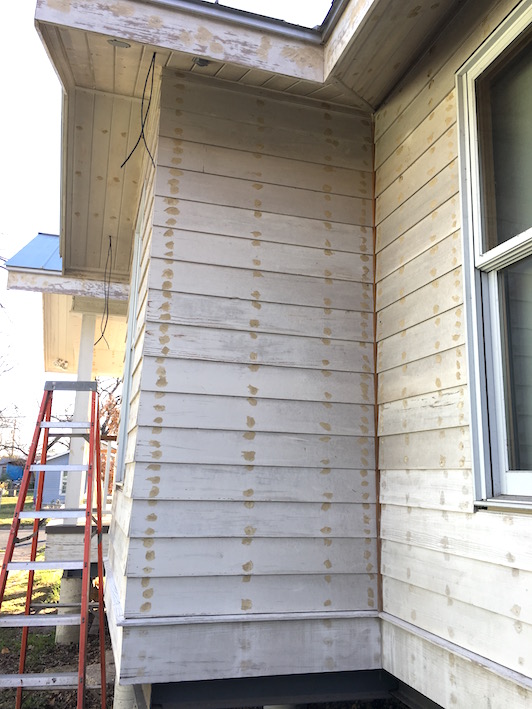 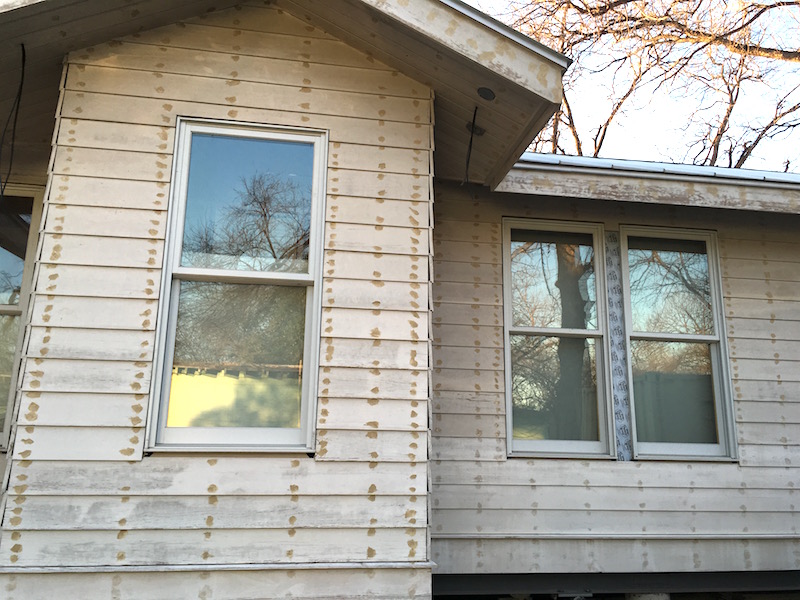 Hold up. There was a problem. Because there’s always a problem, right? Well, this time the problem was that there was a big ugly bunch of electrical meters on the front of the house, totally in the way of further progress on our whole “curb appeal” plan. 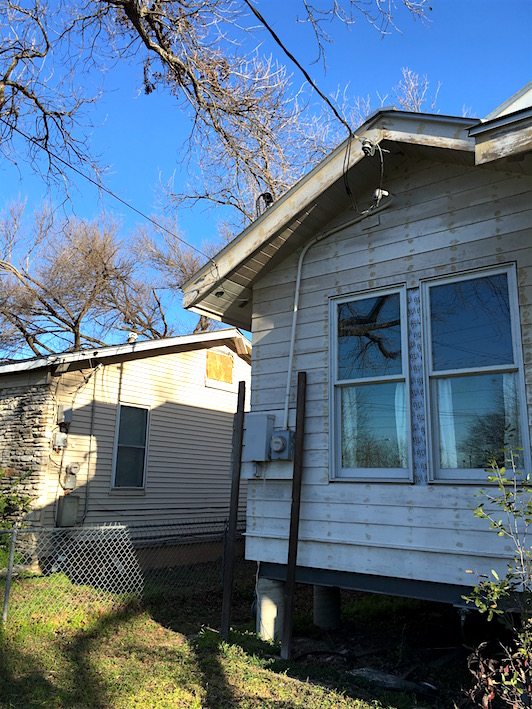 Errek, being an electrician, had wired up a new service on the side of the house ages ago, but the city wouldn’t move us over to the new service until we “finished construction.” But we couldn’t really “finish construction” until the meters were moved. Of course, bureaucracy doesn’t understand nuance, so we had to make it work and then wait and wait and wait until the house was more or less “finished” enough to check off all the boxes on the city forms.

Finally, we got to that place and called the city and, boom, they came out and moved the service to our new box, so we no longer had to run a line from the old service to the new box. 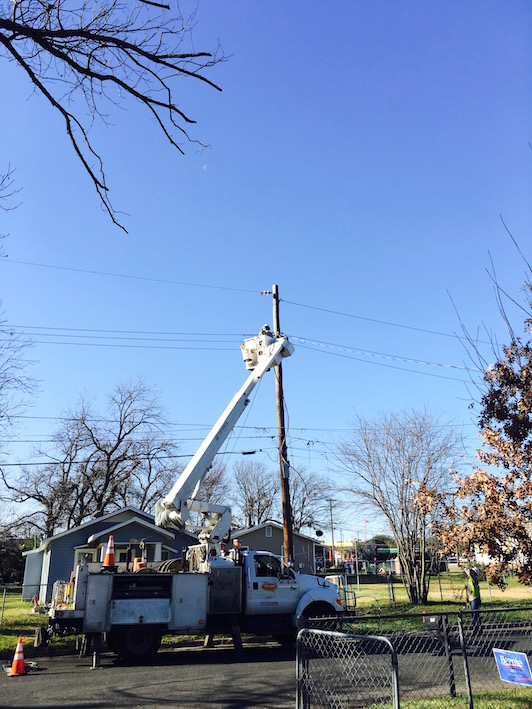 Plus, no ugly box on the front of the house anymore. 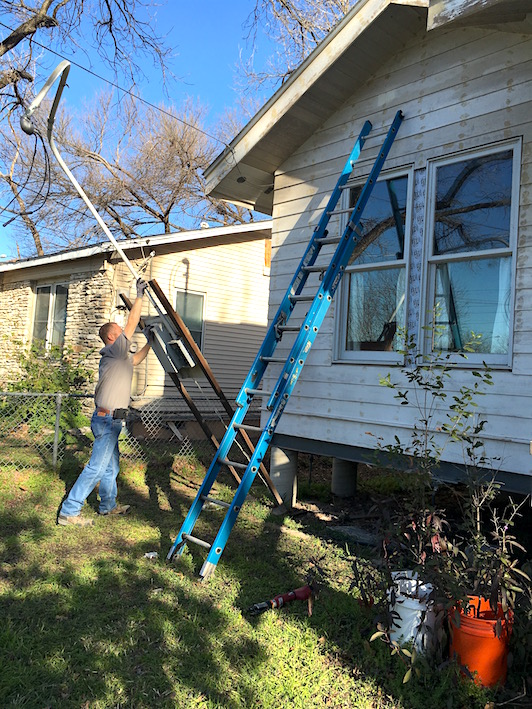 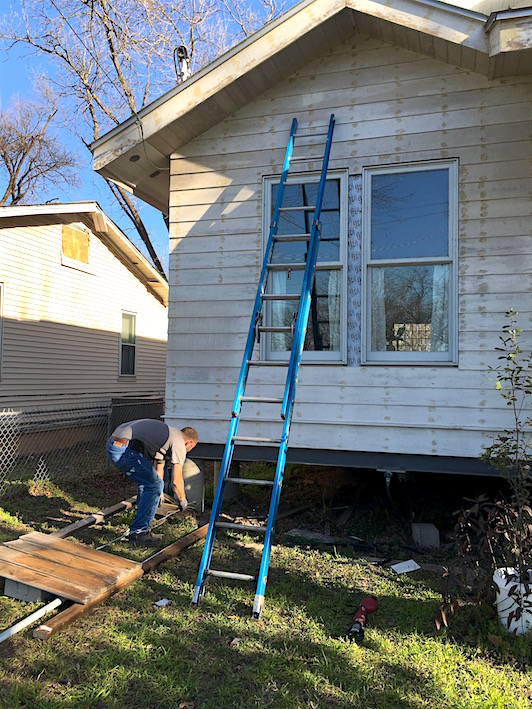 Okay, problem solved. And with that stupid box off of the house face, we were finally ready to make a huge leap forward in curb appeal. Paint!

Errek: “Not so fast, baby, we still have more prep to do.”

Me: heavy sigh (in my whiniest voice) “Why do we have to do all this damn prep?”

Errek: (in his sagest voice) “So that we never have to do all of this again.”

More sanding! After all of the putty was in, we needed to sand those spots down so that the wood was smooth as silk. 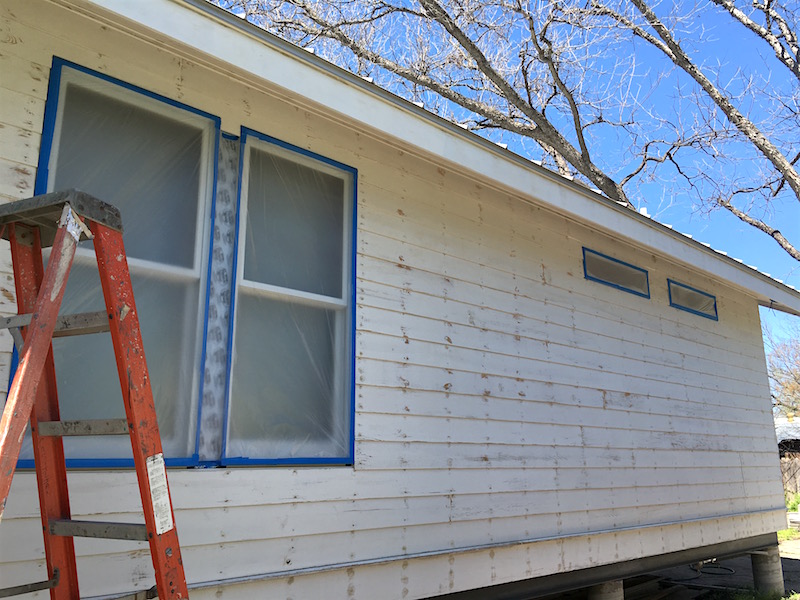 Then if any of the putty looked a little pocked, we’d do another layer of putty and more sanding, rinse and repeat until it was perfect.

I kept saying we needed to power wash it all in order to get the fine coating of sand off the wood. So Errek decided to add another step to our prep, we had to caulk all of the seams so that water wouldn’t ever penetrate between the seams of the walls. To get this done, Errek had to sponge those areas clean and then caulk the seams. It took forever! 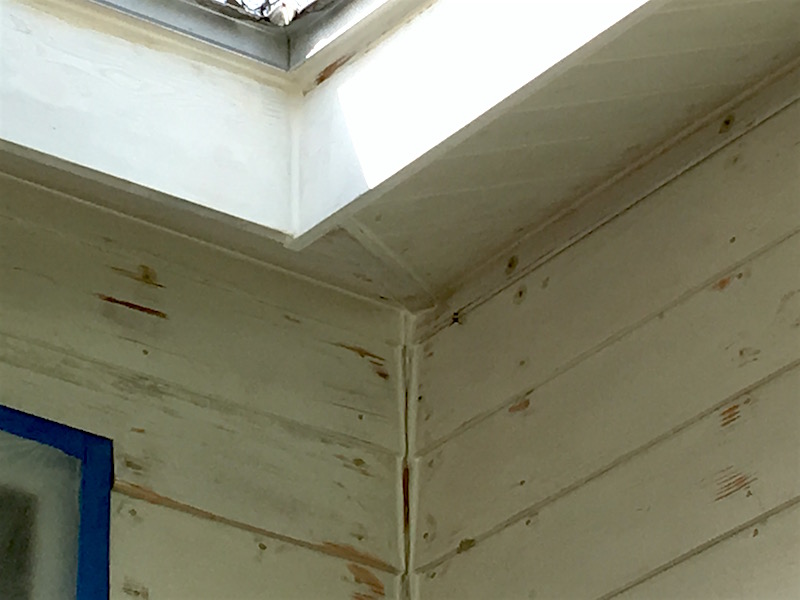 But it was worth it. Clean! 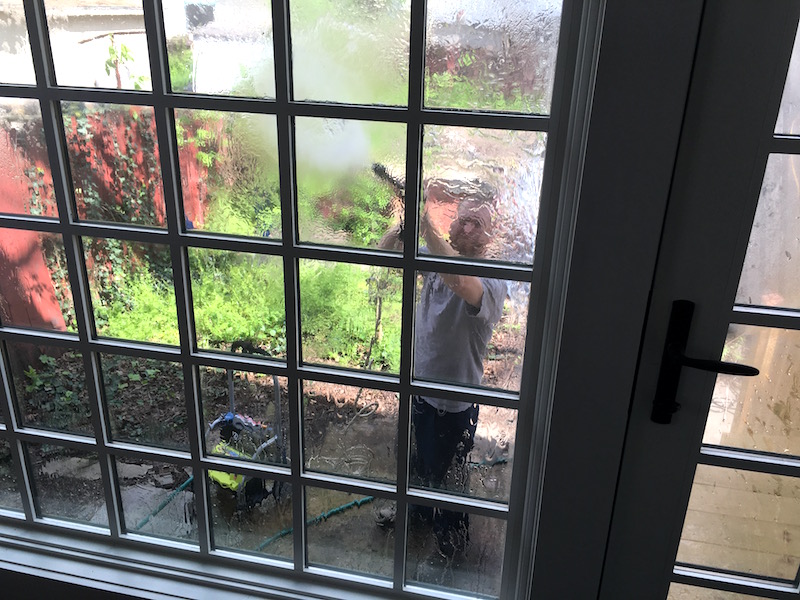 Then after a thorough cleaning, it was time to prime the house.

Errek donned a special suit for the job. Too sexy! 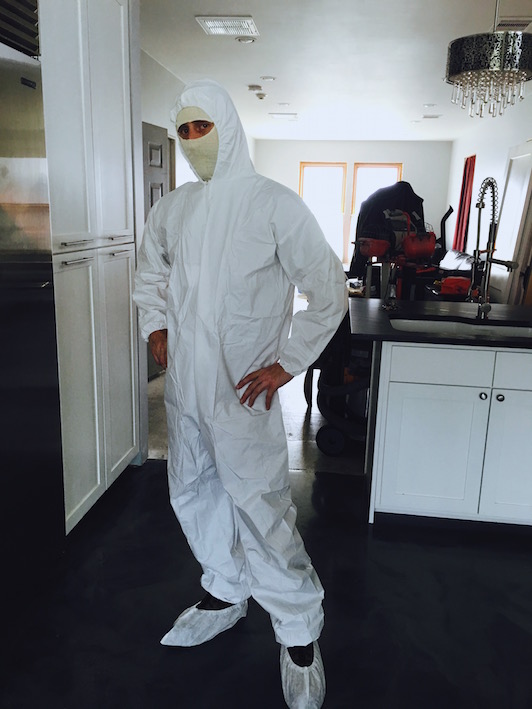 Also, we had to suit up the windows and doors and the porch in their own sexy plastic suits. Basically anything we didn’t want to painted, had to get covered with plastic, which took forever.

But then finally, it was time for paint…well, primer paint.

By the way, if you read the earlier chapters of this blog, then you know that we started out by priming the wood with oil-based paint. Well, that shit flaked off like crazy, so we switched to a really strong acrylic which goes on easy and lasts for a long time. 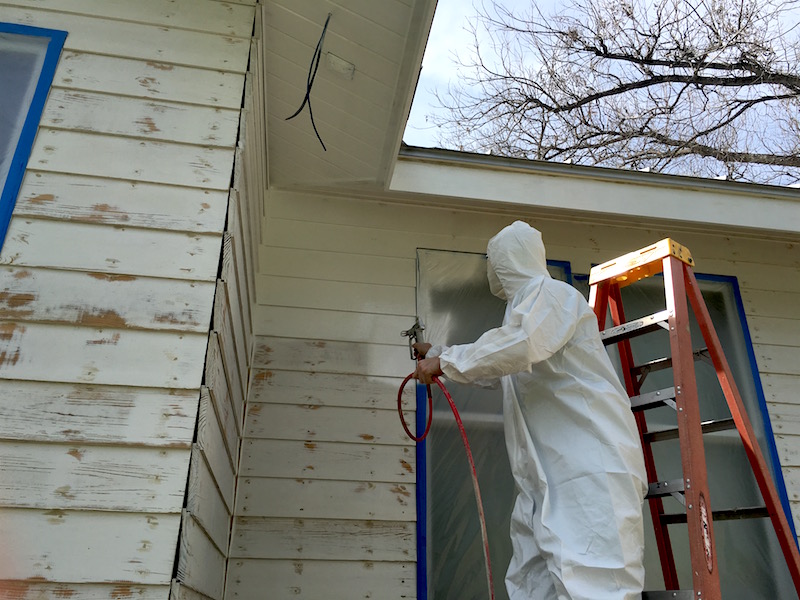 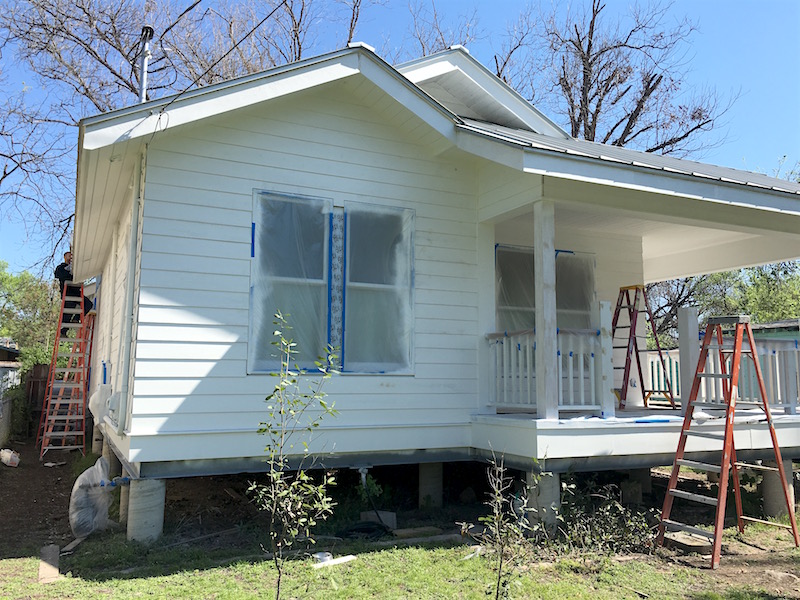 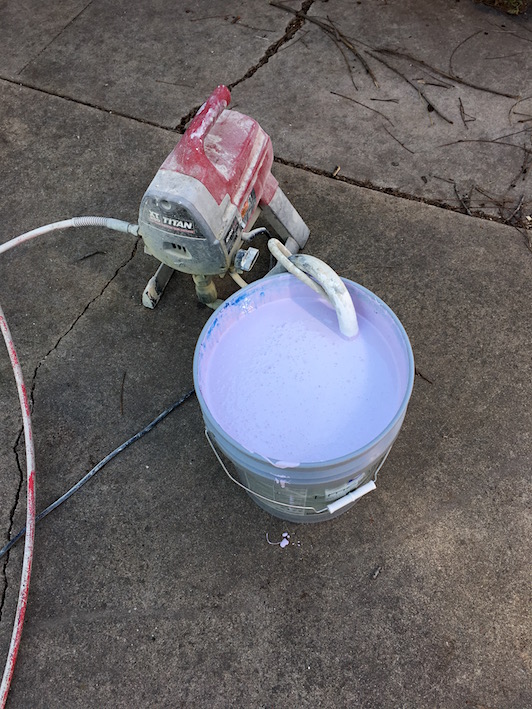 Hehe, I just love Dramatic Chipmunk. But seriously, ohmygod, you guys, we’re about to paint the house…lavender!