Chapter 91: Another Brick in the Wall

Okay, first of all, I’ll be the first to say it: I’m a terrible blogger. It’s been a year and a half since I updated this page.

Literally every time I hug someone and they say, “how’s the house coming?” I answer with, “It’s coming along, I’m going to update the blog soon.” Yeah, I’ve been saying that for a year and a half. So, huggers and huggees, here’s that update I promised you.

When last I left you (a year and a half ago), we’d gotten the walls started on the first floor of the new building and I left you with a teaser about the bricks we’d be putting in. Well, the brick is done now, and quite lovely and if you need custom masonry, I recommend Mr. Ortiz and his crew. 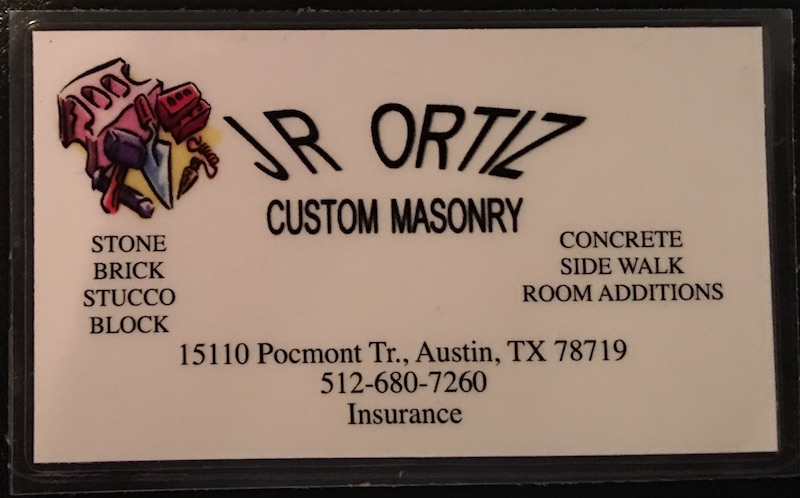 Sorry for the blatant plug, but when we come across a crew of folks who are really good to work with, affordable, and do great work, I’m going to recommend them. Trust me, there will be a couple of non-recommends coming up in this update—cuz honestly, in construction, it’s sadly rare to have a pleasant experience—so it evens out.

But I digress… let’s talk bricks!

Oh, but first, I have another quick note to explain our design concept—we’re aiming for French Quarter courtyard. Now, obviously, our house (built in 1946) and the new building (built right now) isn’t 300 years old, so it won’t feel exactly like you’re pounding hurricanes in a patio bar on Bourbon, but we’re aiming to get close. Working on my hurricane recipe, too. 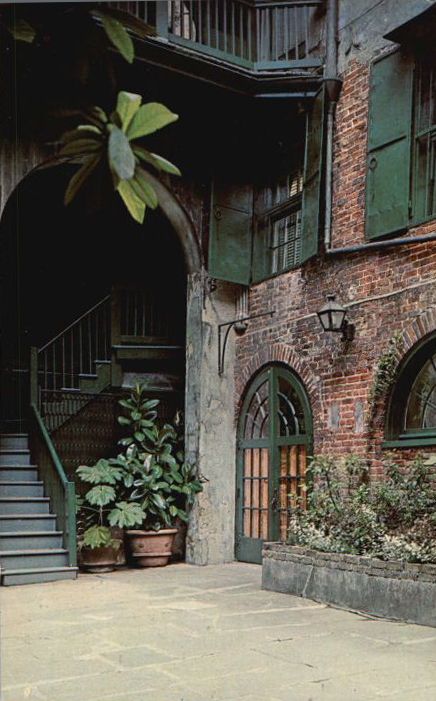 And here’s our canvas: 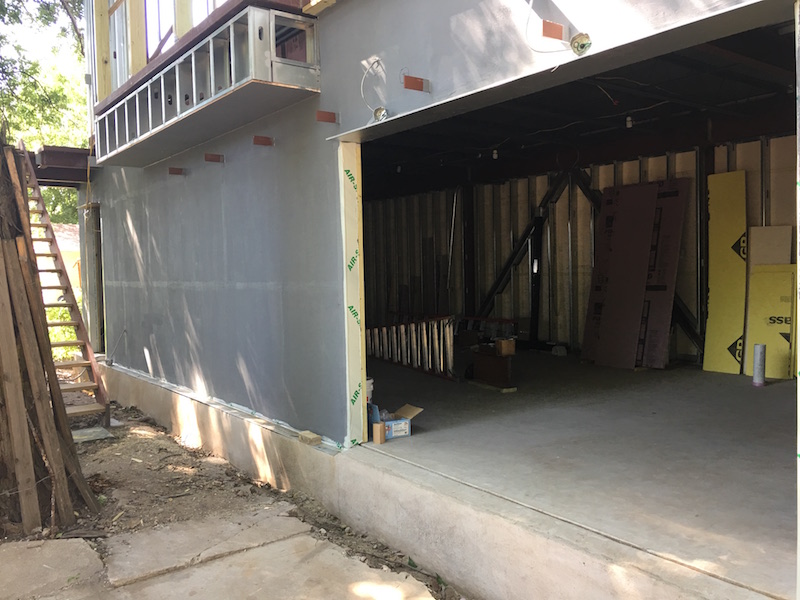 First, we bought an assload of bricks called “Old Bayou.” 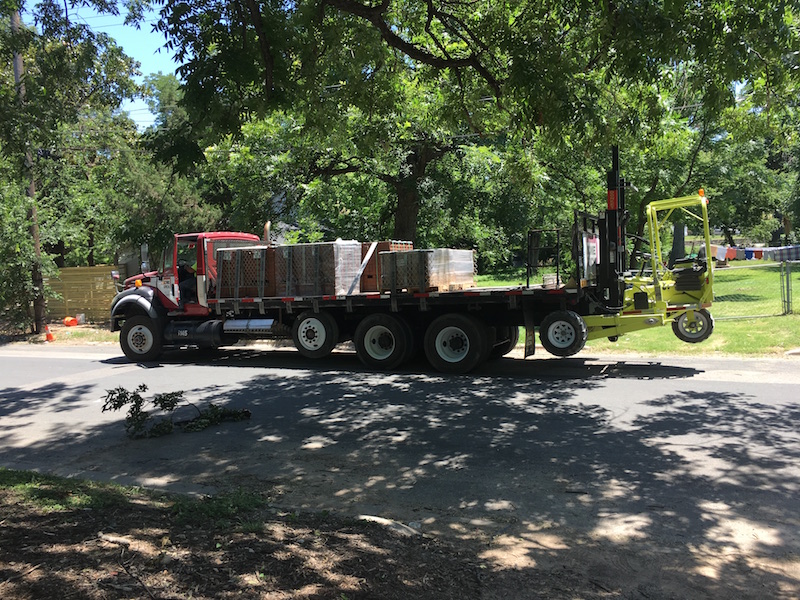 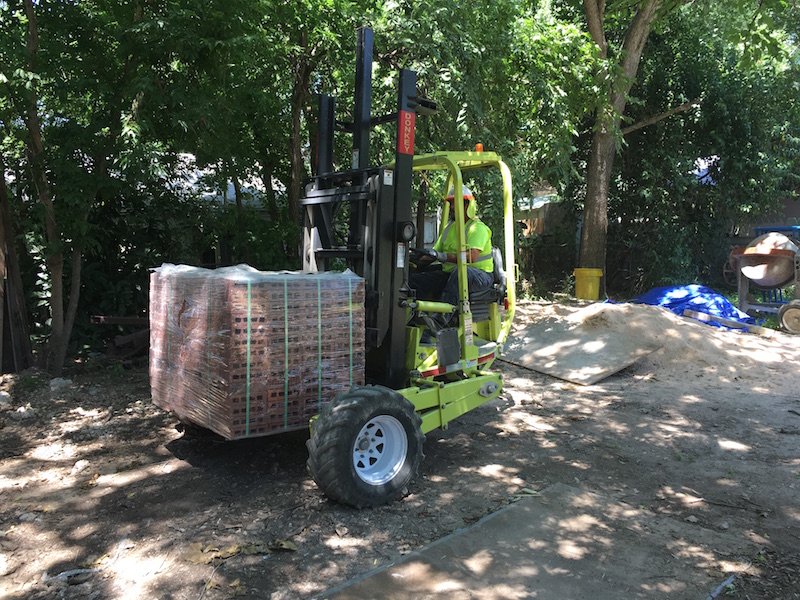 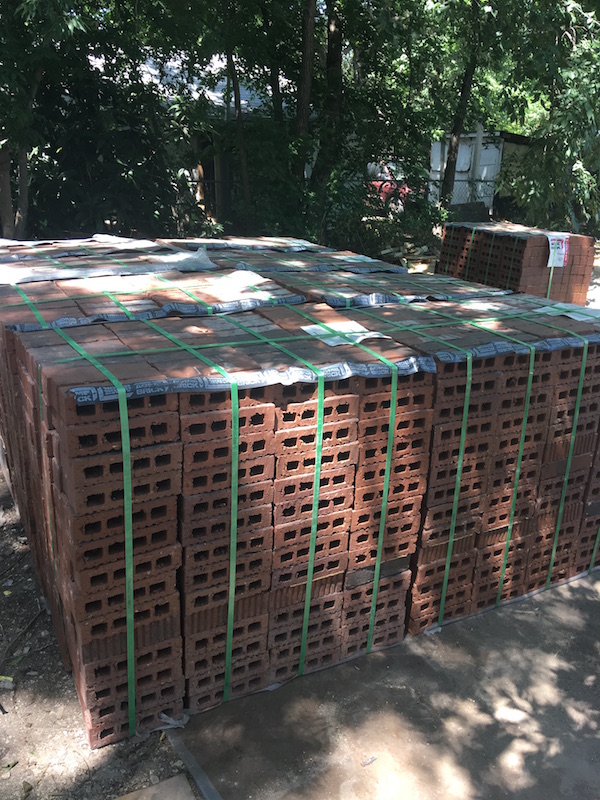 Then Mr. Ortiz and his crew came in and started laying brick. We asked for a “dirty” style of mortar to make the brick walls look less new and shiny and more old and, well, dirty—like New Orleans. 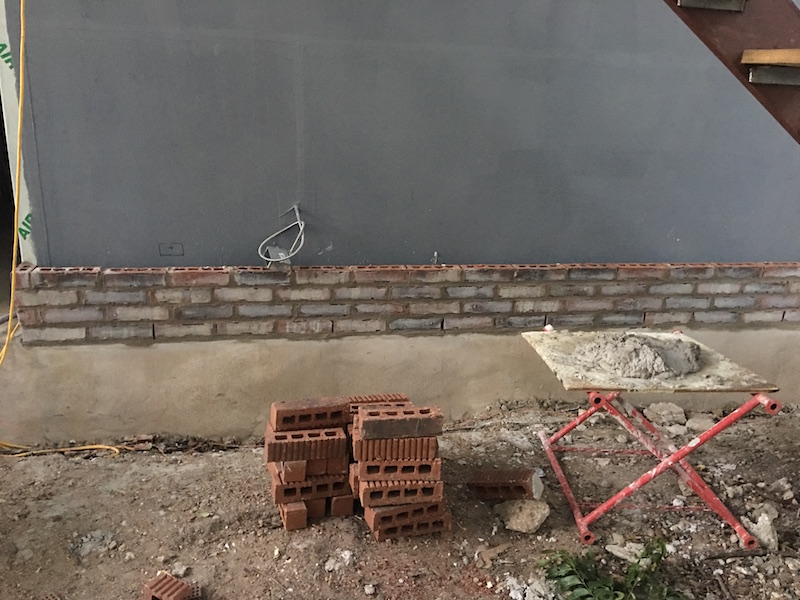 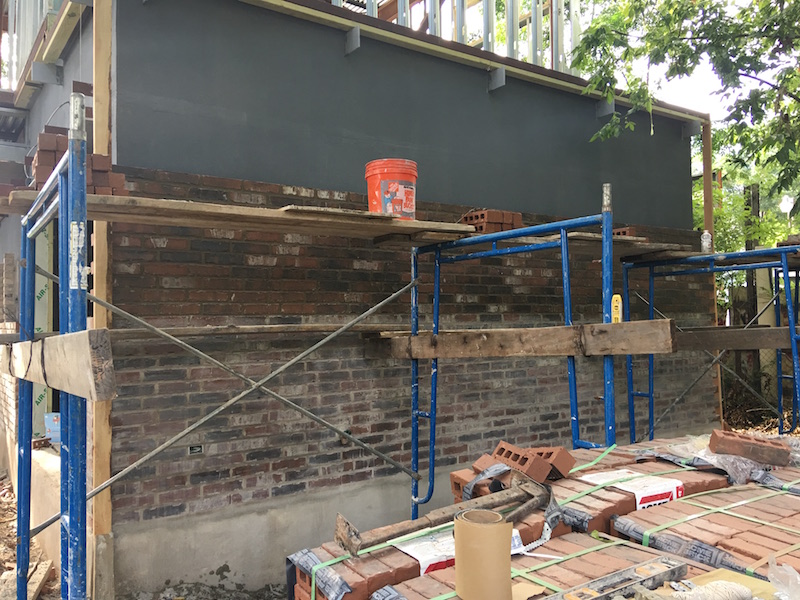 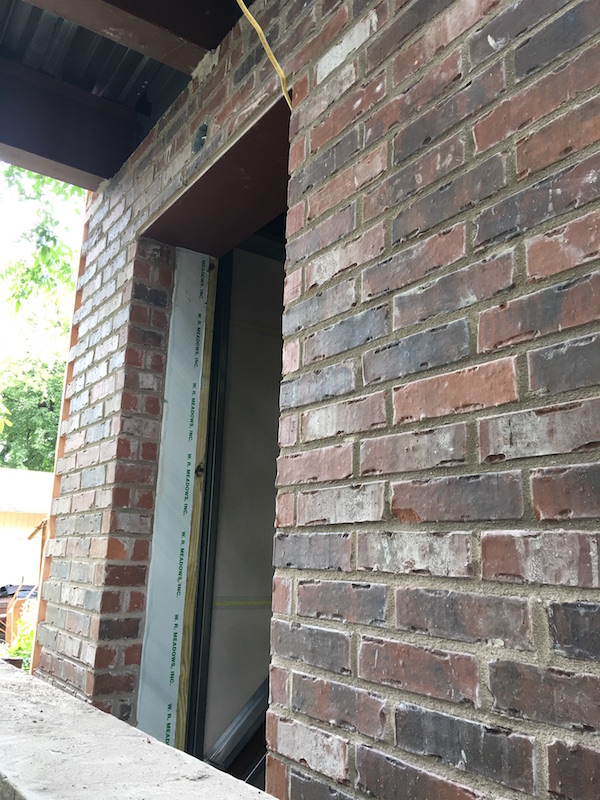 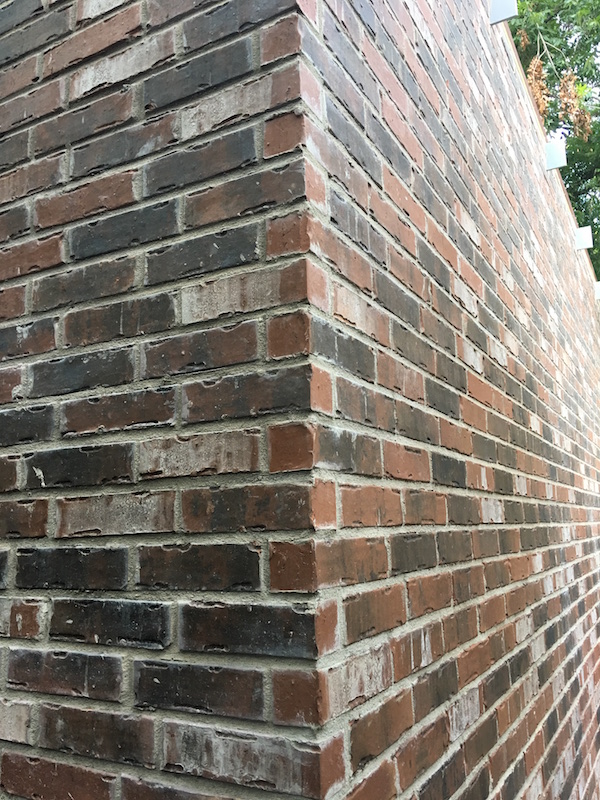 I’ll bet you’re saying, “huh?” and you’d be right to wonder, but stay with me here.

You may remember from, like, a few paragraphs ago that we’re aiming for French Quarter, but New Orleans is really freakin’ old, right? A lot of those buildings in the Quarter are older than the United States, and buildings with that many layers of history, usually have bricked over windows. So, we gave our brand new building a couple of bricked over windows, cuz we’re weird like that.

So Errek got out there with a level and a Sharpie and drew up some windows. 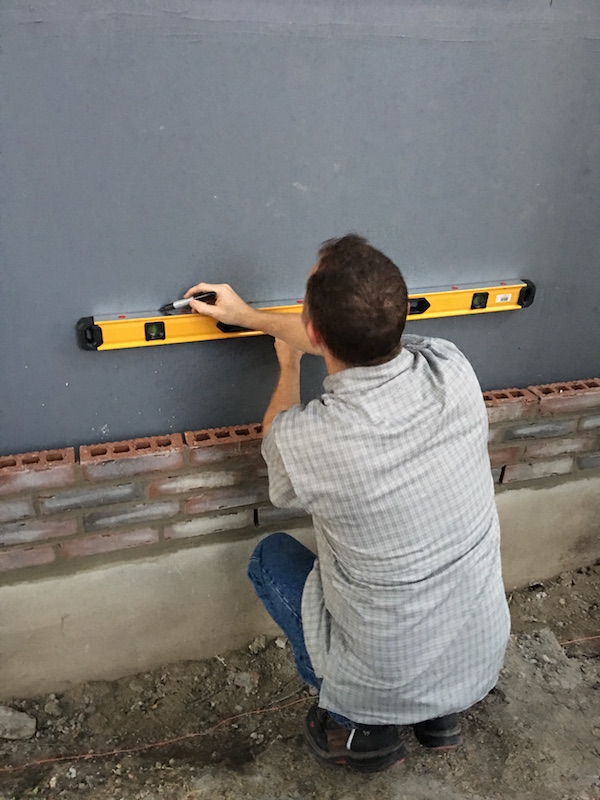 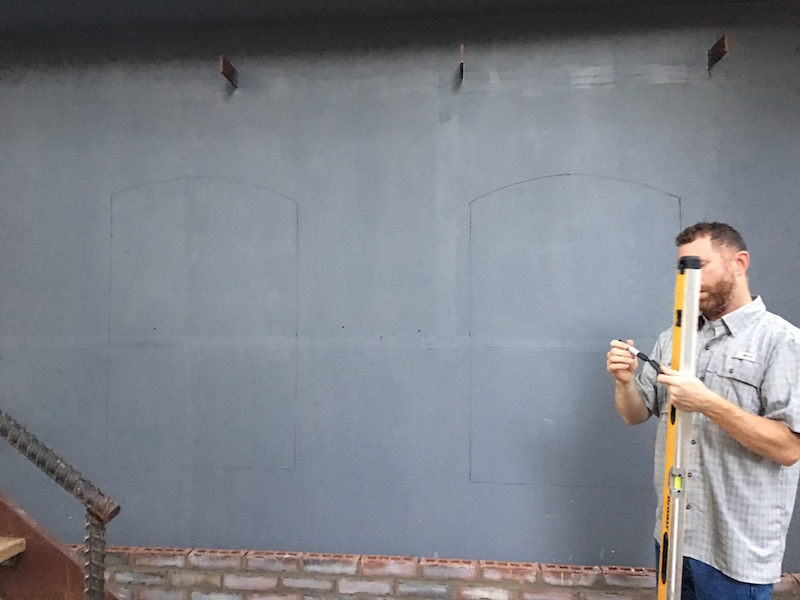 Now, one key design detail of most bricked-over windows is that the bricks are often different from the rest of the building, because the windows were bricked over years after the initial construction. So we used different bricks for this feature, too.

Maybe you remember a prior chapter (Chapter 60: Building History) where I went into the details of how we came into possession of some really old (like over 100 years old) bricks from 5th and Congress? Yeah, these are some of those bricks, so these fake windows are in their own right a neat little bit of history we wanted to add to the building. 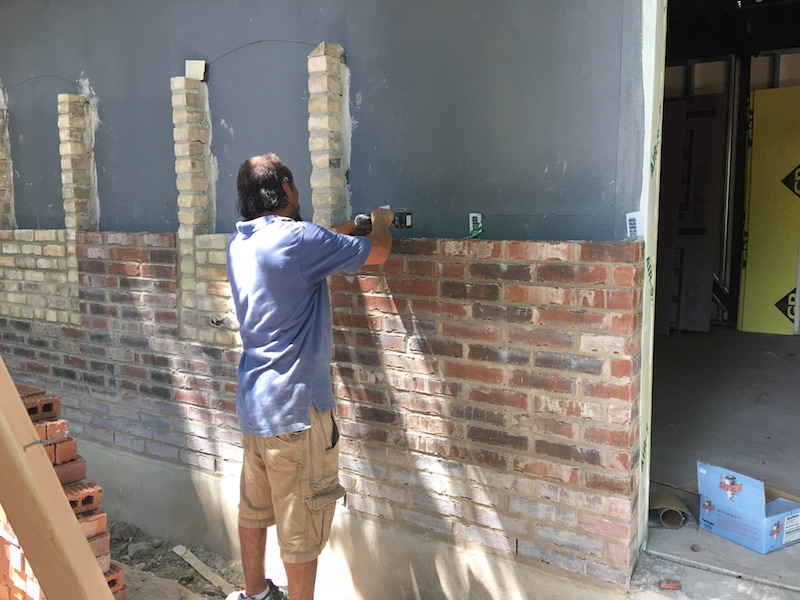 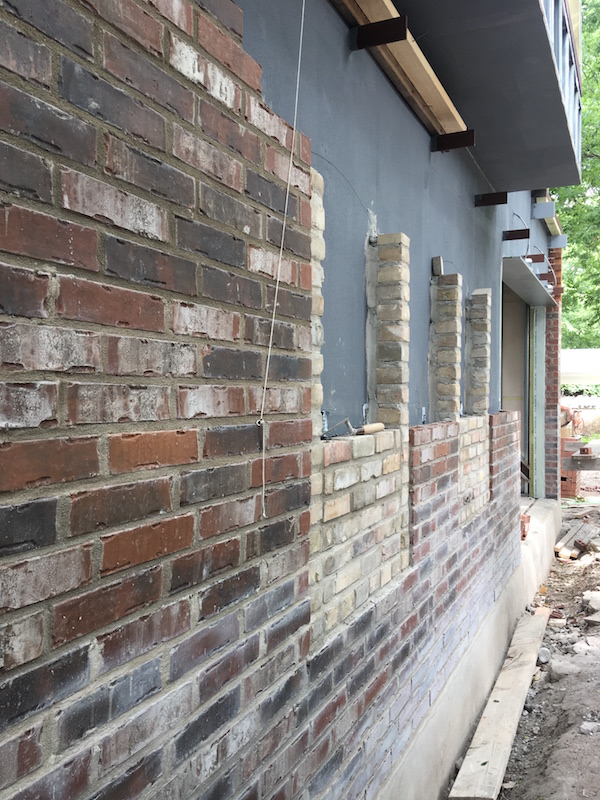 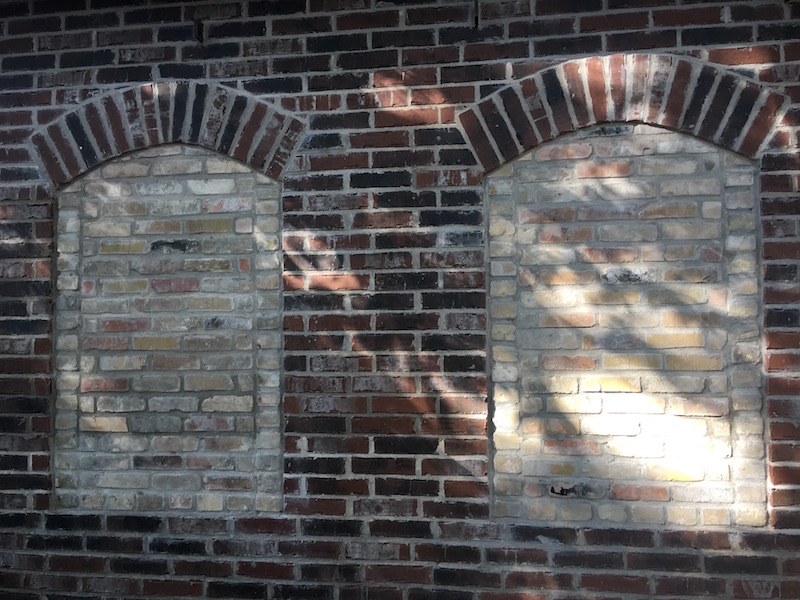 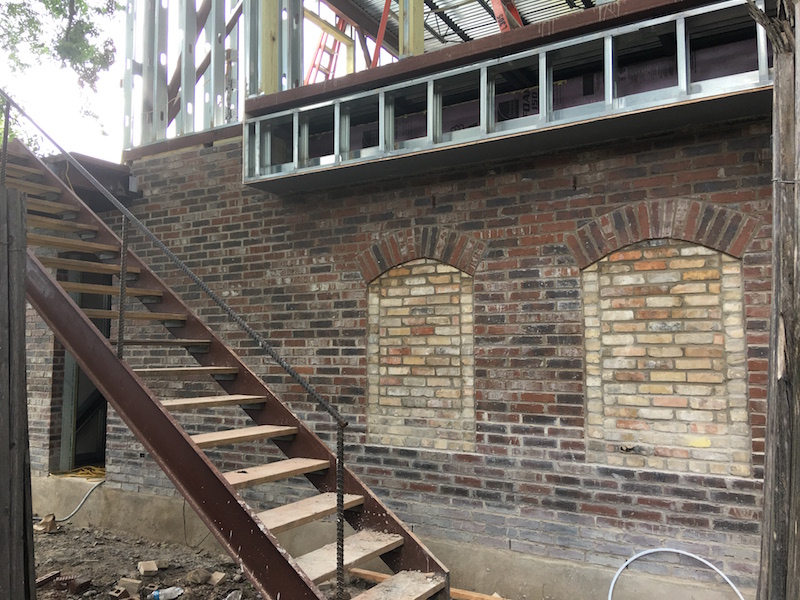 And, so there you have it, our first design feature for the new building. I absolutely adore those two faux bricked windows.

A week ago I gave a tour of the new building to this family who was in town from Laredo and, oddly enough, stopped by to ask for a look around the new building for design inspiration. They assumed that the wall was old and the rest of the building was new until I explained it. Warmed the cockles of my cold, black heart to know that we fooled some folks.

Now y’all all know the truth though.