So, you know how we have a flat roof over the two sides of the second story and the rooftop? Well, the plan is for that to be invisible and protected, covered by a floating deck.

Initially, we’d talked about doing concrete paver stones, but they weigh about a hundred pounds a piece and the thought of Errek actually lifting all that weight up one or two flights of stairs just seemed like a terrible idea—this project is not in its 12th year, and we ain’t spring chickens anymore.

So, we looked into other materials. Ipe is what we used on the front porch, and we found some great floating deck squares made of Ipe, so we bought them. The company had a “curbside” delivery option that was relatively cheap, so we went with that.

Turns out, the “curbside” part is totally literal. He delivered them into the street. Awesome! 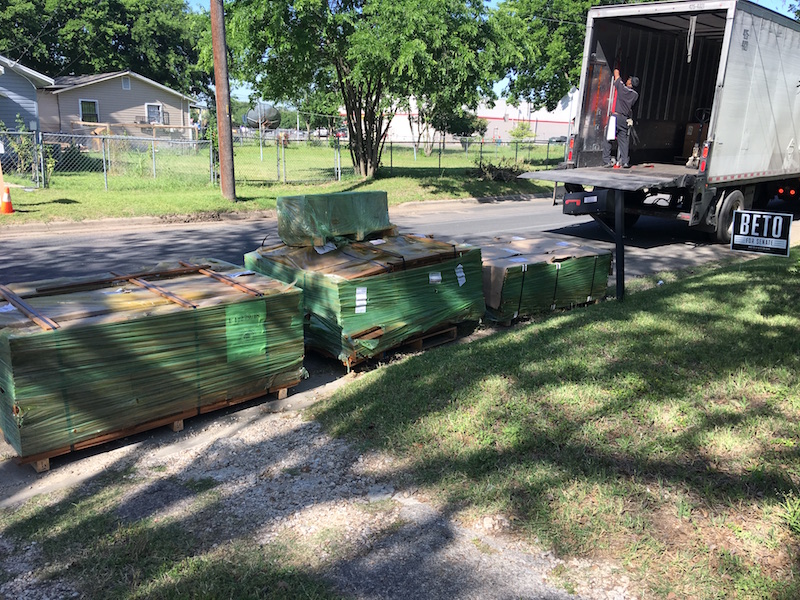 So I put out some traffic cones, and then when Errek got home we hauled them back to the second building one wheelbarrow load at a time. 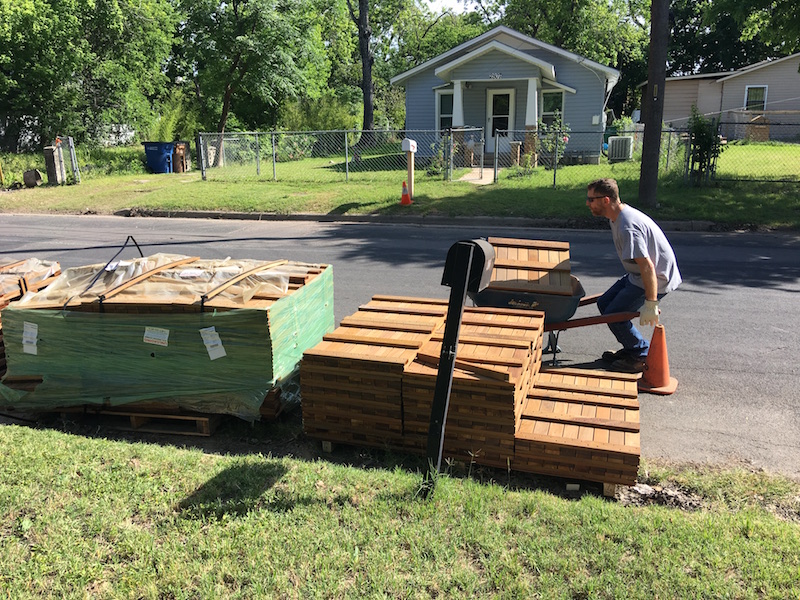 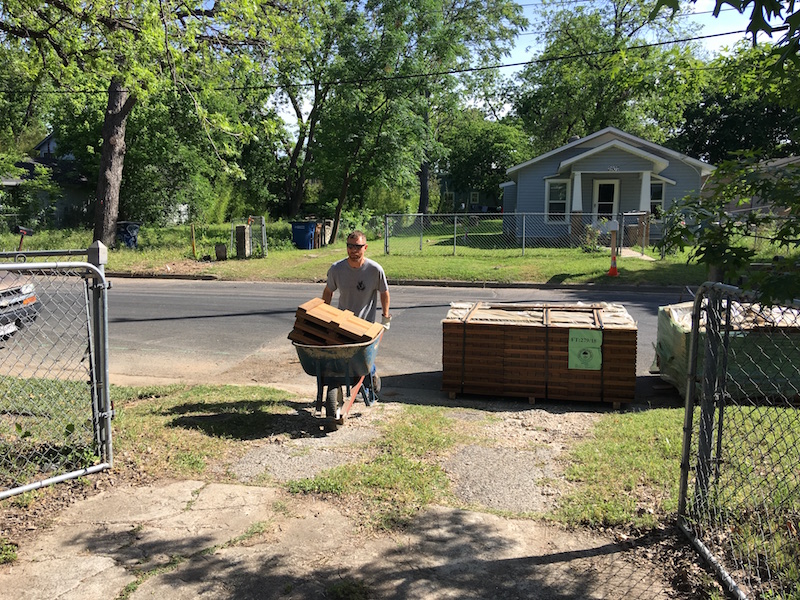 Then carried them upstairs and stacked them up. Oh my god, so much decking. 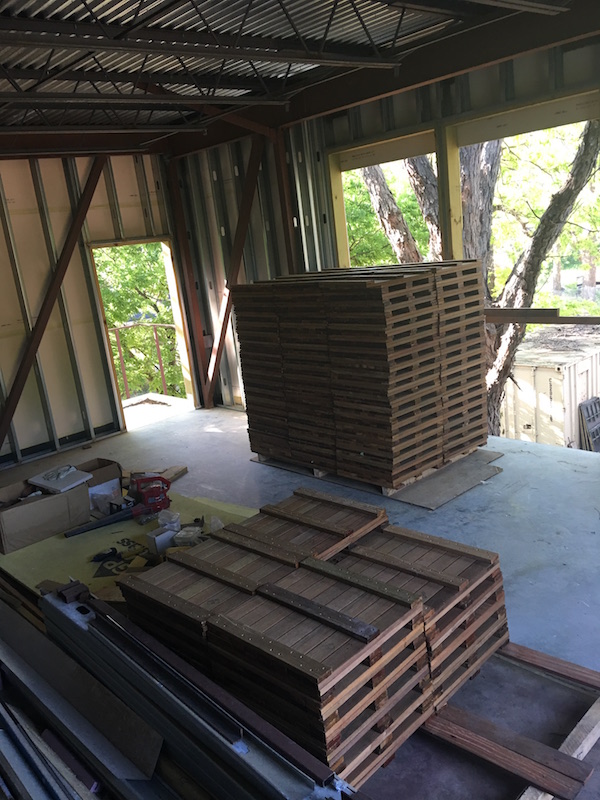 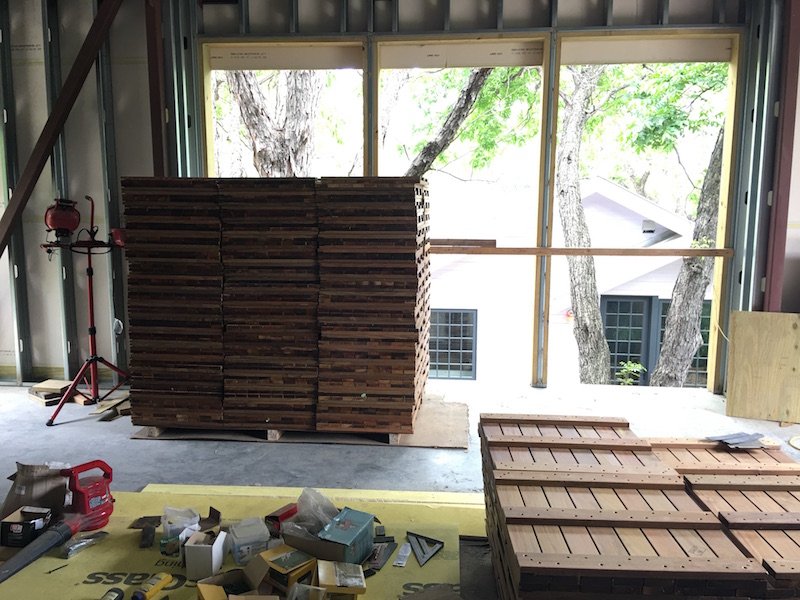 Andrew had already built a bottom rail on the railing which would support the other rim of the decking. Then Errek built an inner framework with roof deck footers and 2x4s. The he started laying it all out piece by piece in a checkerboard pattern. 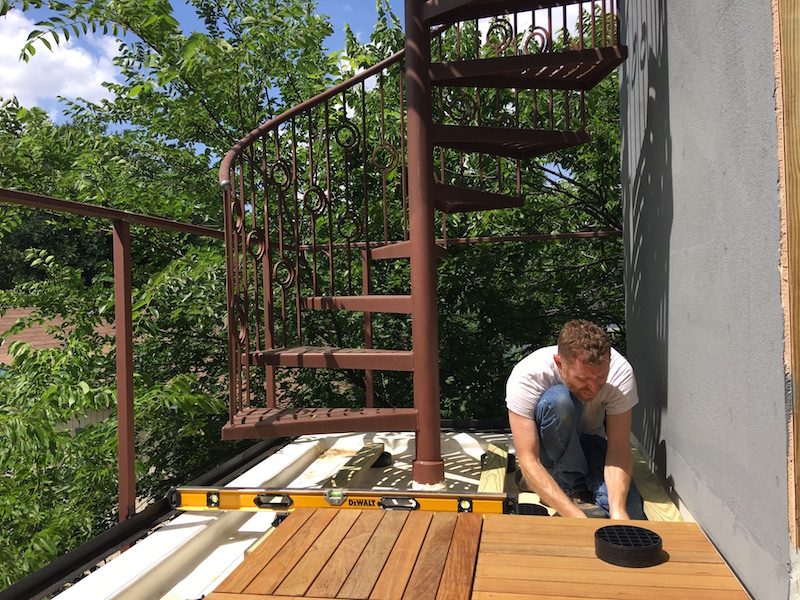 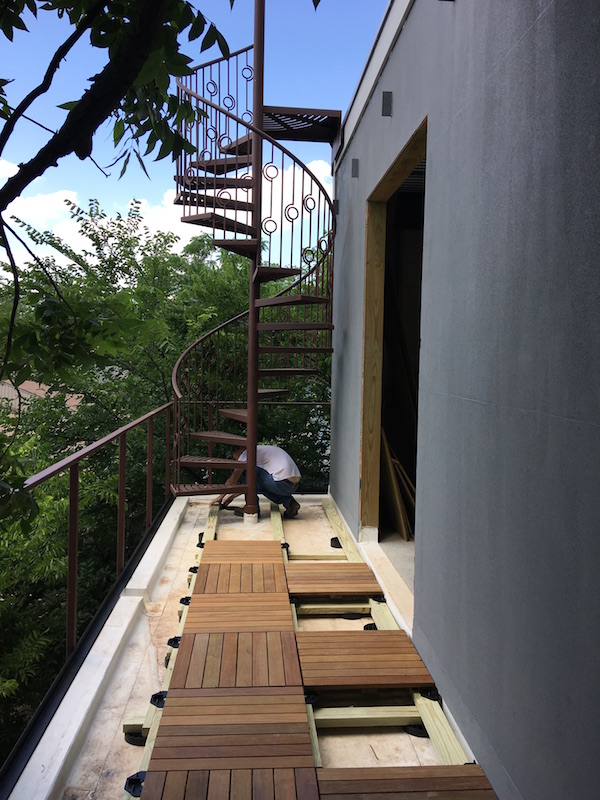 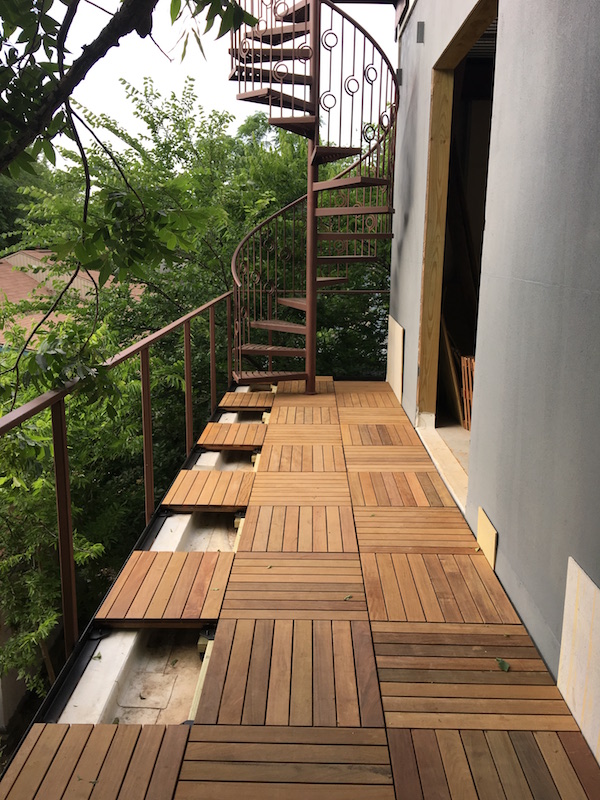 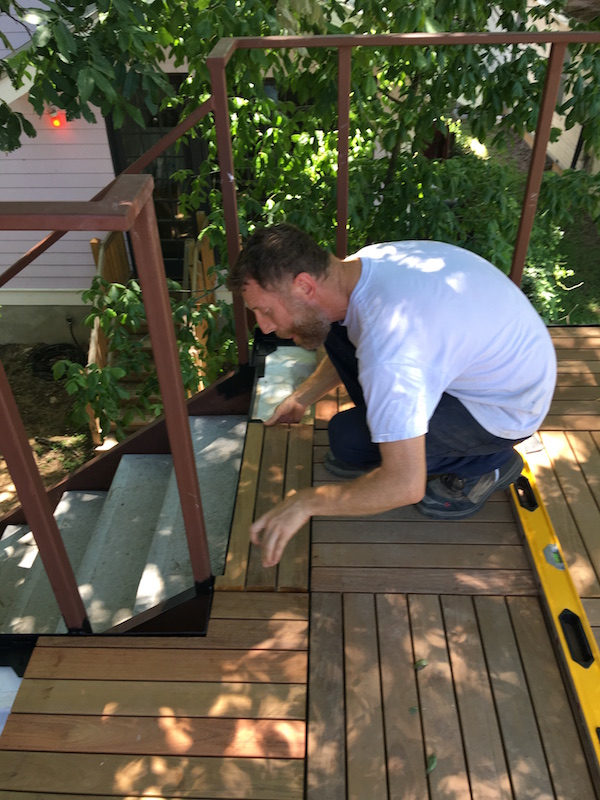 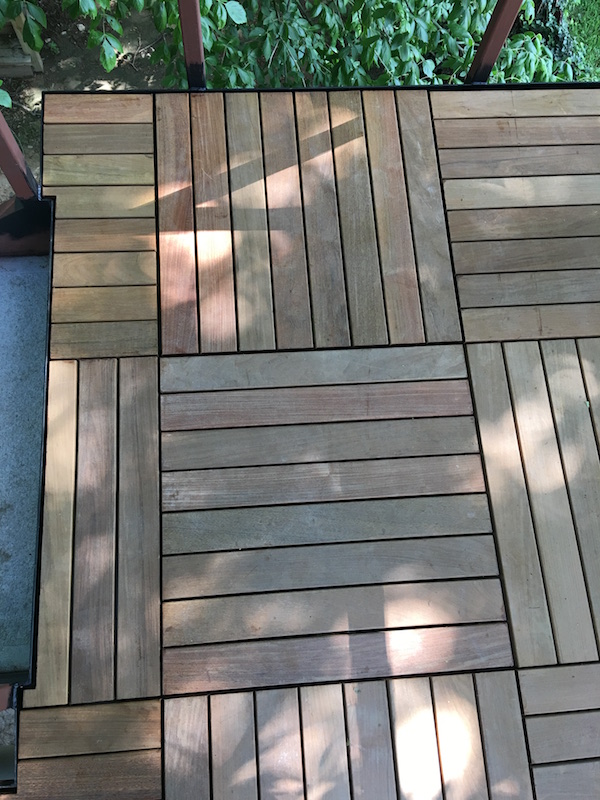 Et voilà! Look at that sexy deck and those awesome stairs together. 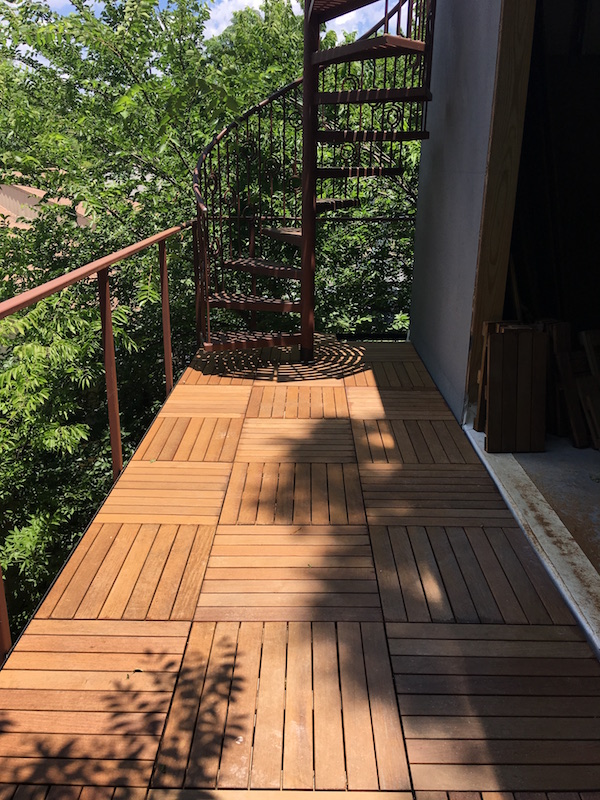 And with that badass railing. *sigh* 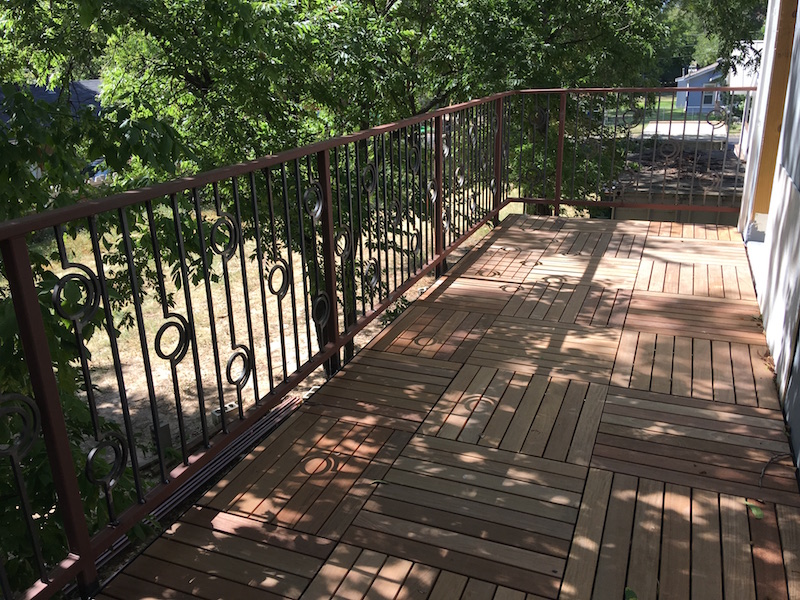 So, the deck is laid for the east and west patios on the second floor, but we need the railing on the top floor in order to put the deck up there.

So next we turn our attention to the main house for a while.